Izabel Itikawa remembers the day the Brazilian government came and threw her out of her home — a farm in the Amazon. She said police showed up waving a judicial order.

“I was expelled from my property, expelled in a humiliating way. … They arrived, breaking into our gates, breaking our locks, invading our properties … with machine guns, with guns in their hands,” she said.

That was in 2009. Itikawa’s family lost the land after a court upheld a decision by then-President Luiz Inácio Lula da Silva. He had declared a region the size of Hawaii — including Itikawa’s land — an Indigenous reserve, named the Raposa Serra do Sol.

That court decision was a huge win for Indigenous people. It followed a vicious battle that began in the 1970s, when Brazil’s military dictatorship built roads into the Amazon and encouraged people to settle there. The country’s 1988 constitution recognizes Indigenous land rights, but it’s taken a long time and many court cases to sort out which territories belong to whom. In the meantime, violent confrontations ensued between Indigenous people and farmers. It finally subsided in recent years, but now, President Jair Bolsonaro’s support for commercial farming in the Amazon is reviving old tensions.

Itikawa’s family was compensated — she says they received 5% of the land’s value, and it wasn’t enough. They still found usable land outside the reserve to continue farming, but they always hoped to return to their original farm.

“Our hope has been reborn. Today, I have a real president, Jair Messias Bolsonaro, who knows what Brazil needs.”

“Our hope has been reborn,” said Itikawa, who believes the Bolsonaro government will partner with Indigenous people so that farmers like her can return to the land as renters. “Today, I have a real president, Jair Messias Bolsonaro, who knows what Brazil needs.” 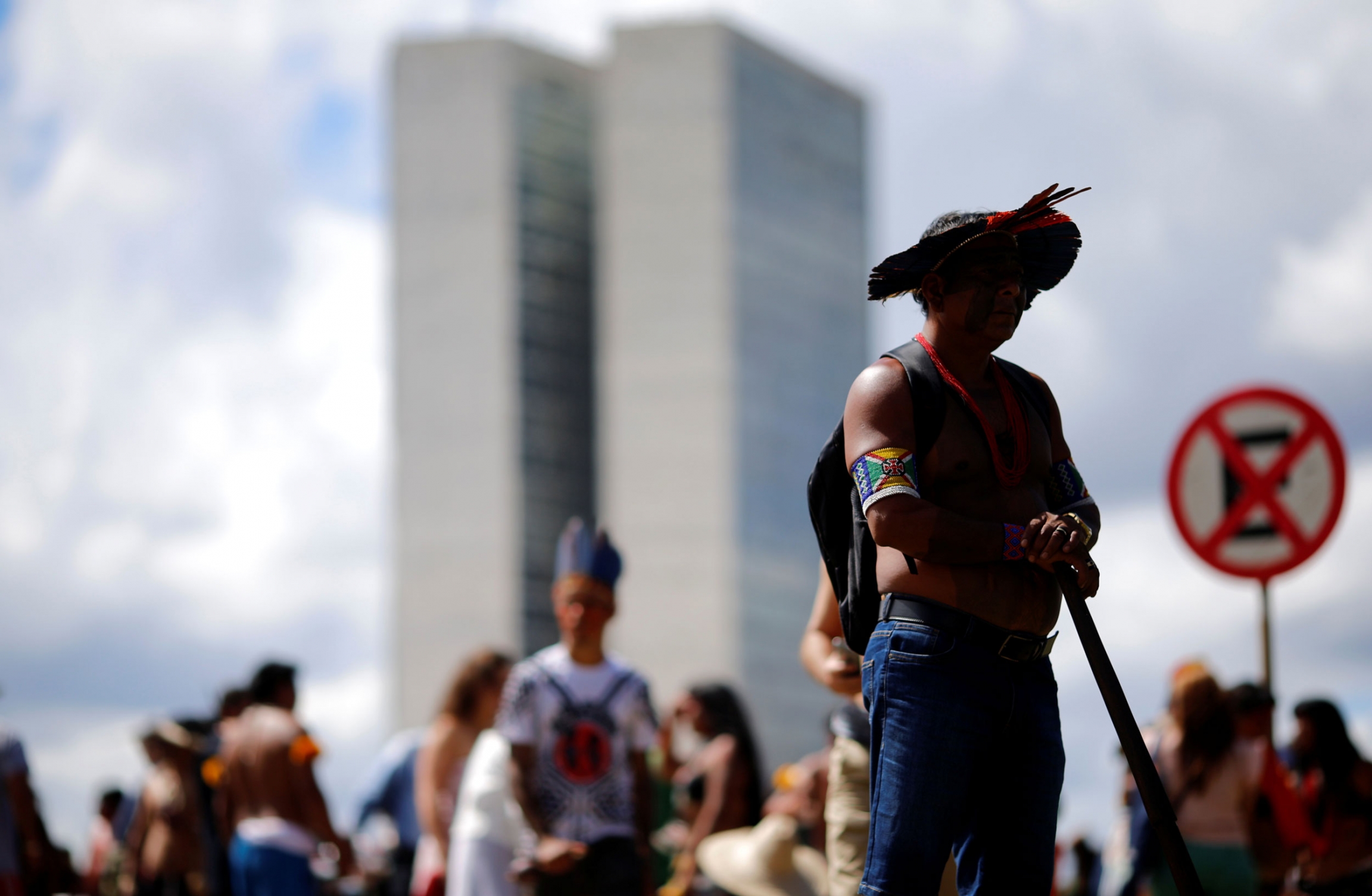 Indigenous people attend a protest to defend indigenous land and cultural rights that they say are threatened by the right-wing government of Brazil's President Jair Bolsonaro, in Brasília, Brazil, April 2019.

And Bolsonaro has been clear about his policy on Indigenous land.

“In 2019, we're going to rip up Raposa Serra do Sol. We're going to give all the ranchers guns,” he said before he became president.

Bolsonaro says people who make up 1% of Brazil’s population should not have 12% of the land. He’s proposed allowing large-scale mining and farming on reservations.

On his first day in office, he issued an executive order preventing any more land being declared Indigenous territory. And he essentially moved the federal department responsible for Indigenous health care and education under the agriculture department — which likely would give farming interests more power over what happens to Indigenous land.

Some Indigenous people agreed with those moves. But thousands of others marched on the capital, Brasília, to protest. In late April, they rallied there for three days.

From the nearest big city, it takes half a day to drive to the heart of Raposa Serra do Sol. For the first hour’s drive, the countryside is dotted with farmland that looks like the American Midwest.

Then, the paved road ends, and the Indigenous territory begins. From the bumpy, red dirt road, all you can see is flat Amazonian savanna, with dense trees and shrubs. Now, it’s back to being a home for 25,000 Indigenous people from multiple ethnic groups. They raise cattle and farm in what they say are sustainable ways.

After another two hours’ drive, you’ll find an open-air building next to a lake. Indigenous leaders from different groups gathered there on a June afternoon. 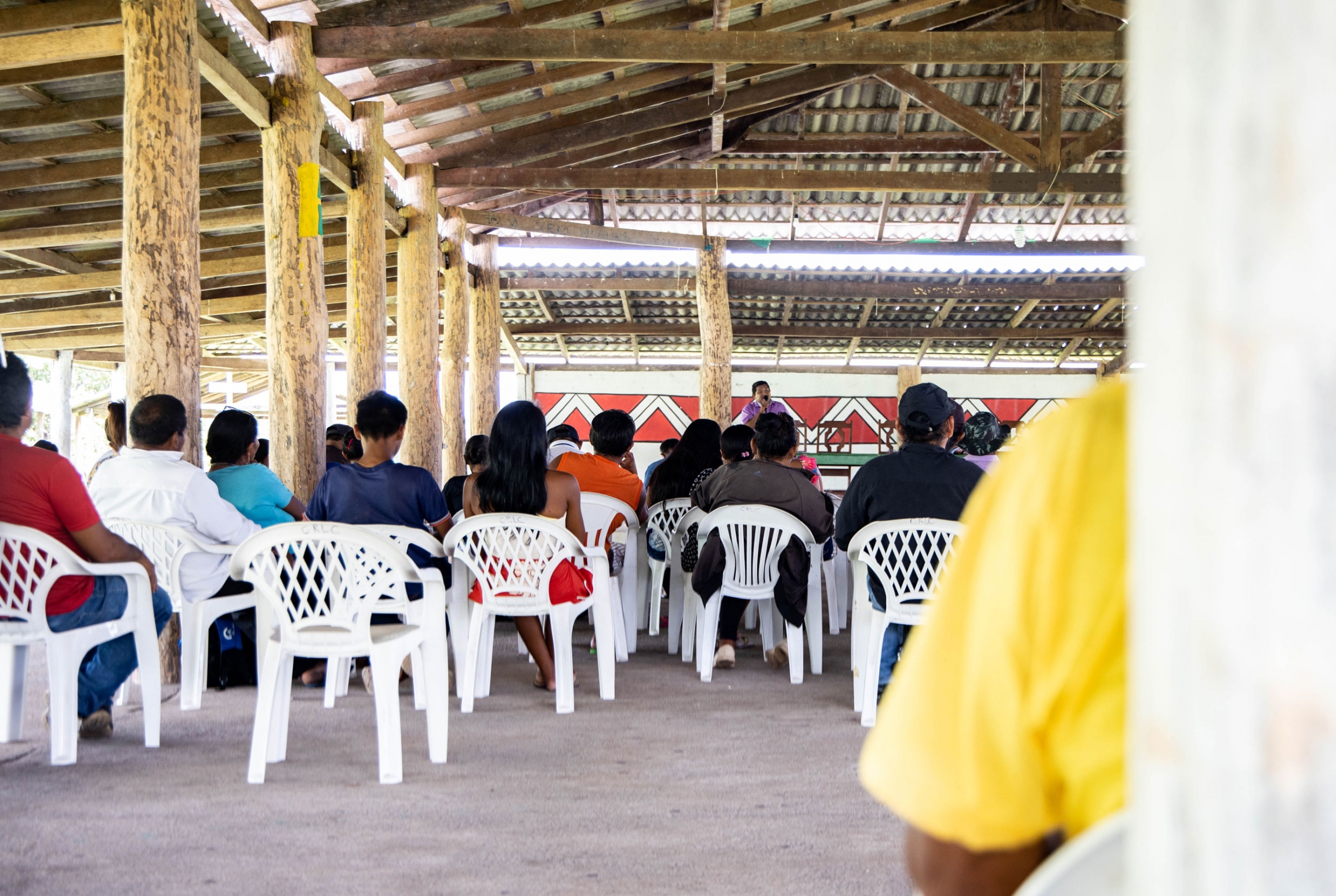 Afterward, Dimas recalled the situation Native Americans in the US faced in the 1800s, when the government urged farmers to settle the land west of the Mississippi.

“Today, we see the same thing happening here with the Brazilian president,” he said.

“They were left without rights, without land, living on the streets,” he said. “And why? Because those communities accepted renters on land that belonged to them.”

Dimas said he’s heard Bolsonaro say he wants to arm farmers who seek to reclaim the land. If that happens, he says they will decimate the Indigenous population. A missionary here explains why that fear is so real for the Indigenous people. 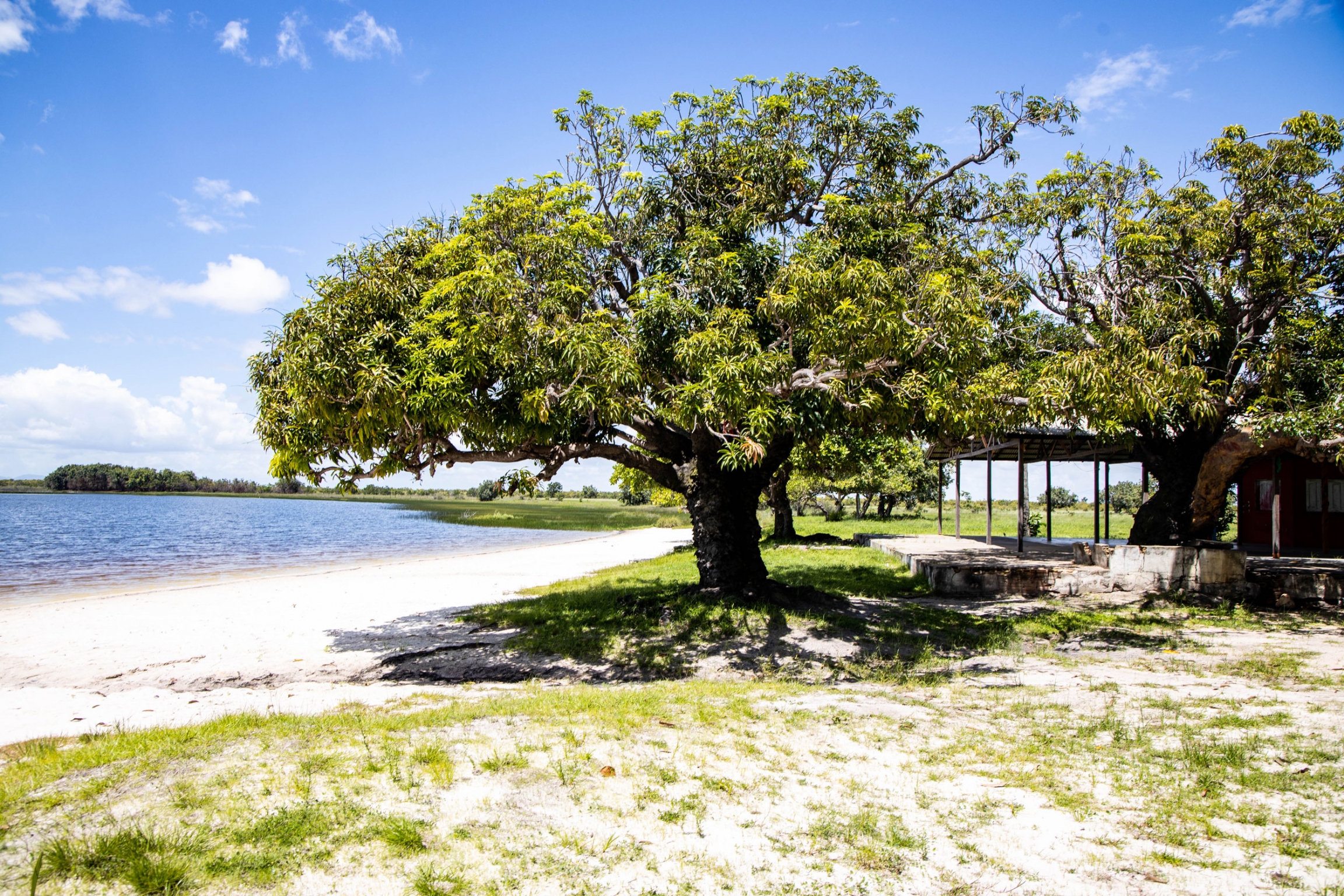 The Raposa Serra do Sol is about the size of Hawaii. This is a lake next to a central meeting place for Indigenous groups.

“Indigenous [people,] they like fishing and also gathering of the fruits and also hunting. And these farmers, they would not allow them to enter the lands. If they did, they would be shot.”

“Indigenous [people,] they like fishing and also gathering of the fruits and also hunting. And these farmers, they would not allow them to enter the lands. If they did, they would be shot,” said Gabriel Oloo, a Roman Catholic priest from Kenya who’s here to preach to both the Indigenous people and farmers.

He said in the past, it was like a war zone in the Raposa, with farmers attacking and shooting Indigenous people whom they saw as trespassers. Oloo says all that may begin again if Bolsonaro keeps encouraging farmers who still want their land back.

“We hope it will not happen again,” Oloo said. “We are expecting this government to respect the rights of the Indigenous, as stated in the constitution. If their rights are respected, there will be no conflict.”

Indigenous groups appear to have won the first round with Bolsonaro. Last month, Brazil’s Supreme Court ruled that the president didn’t have the power to move the department that oversees Indigenous health care and education into the agriculture department.

It’s a victory for those who protested at the capital, like 19-year-old Carla Jarraira dos Santos. She plans to become a lawyer to defend Indigenous rights.

“Nature’s perfect the way it is,” she said. “We, as Indigenous youth of Roraima, we carry this flag of sustainability. And we are here to strengthen the fight of our elders in our communities using the wisdom of our ancestors.” 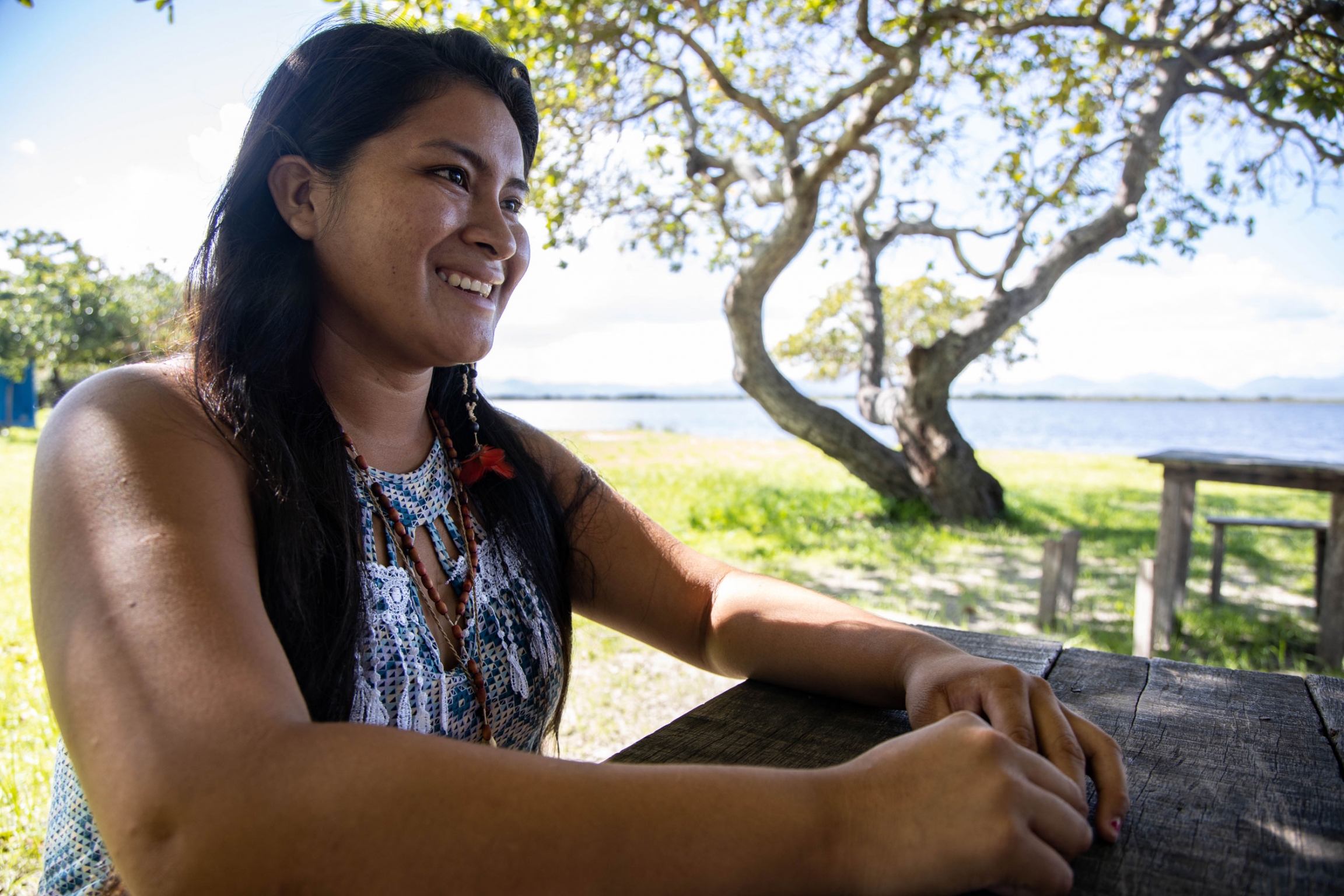 Dos Santos says especially now, with the threat of global warming, it’s important the land has a protector and advocate. And, she says, her people are its natural stewards.

“My farm existed before there was the Indigenous land, Raposa Serra do Sol,” she said.

If anyone can make things right, she says, it’s her president, Bolsonaro.

Related: Defending the forest for all of us: Indigenous tribes are the last best hope for the Amazon