There’s no wall or fence between Brazil and Venezuela. People can walk between the two countries, and they do, but it’s a long march through rough terrain. The easier way is driving. The sole road from Venezuela to Brazil goes through the city of Pacaraima. 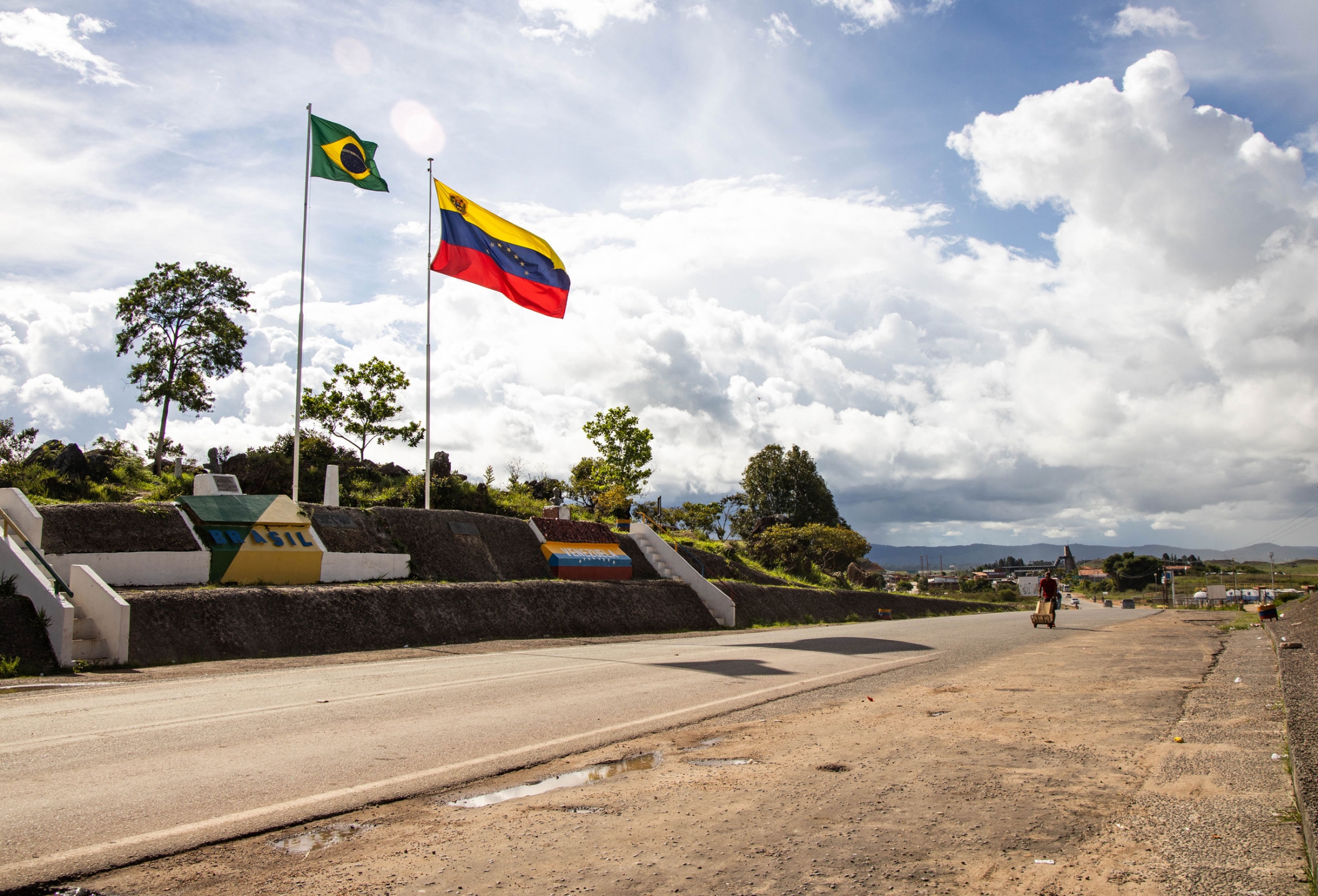 There’s no wall or fence between Venezuela and Brazil, and there’s just one road between the two countries. Two flags mark the divide.

Back home in Venezuela, she says they couldn’t find Camilo a doctor or food. The situation drove González and her husband here. They’re joining her father-in-law, who’s already in Brazil. For now, they’ve asked the Brazilian government for shelter.

“We’ll probably be allowed into the shelter because we have a child. But single men traveling alone, it’s more complicated for them.”

“We’ll probably be allowed into the shelter because we have a child,” González said. “But single men traveling alone, it’s more complicated for them.”

The Venezuelan economy has collapsed, forcing many Venezuelans to flee poverty and violence. About 800 people like González arrive in Pacaraima every day, hoping to find refuge in Brazil — a rising economic power, one of the world's biggest democracies and South America's most influential country. Over the last year, Brazil’s response to the crisis has changed dramatically — with help from the US and many others.

Last year, when the number of Venezuelans coming to Brazil began rising, migrants set up tent cities in Pacaraima. After a local shopkeeper was robbed and beaten, residents marched on the makeshift refugee camps, burning them to the ground and chasing hundreds of Venezuelans back over the border. It made international news.

“Before I would stay here until 11 p.m. or 12 a.m.; now, I cannot do that. Who would not get upset? Anyone would,” said Rita Aurea da Silva Almeida, who’s owned a popular Pacaraima restaurant for 30 years. She says her community has changed and become more violent.

For Almeida, the issue was crime in her neighborhood. For world leaders, the issue was regime change in Venezuela. US President Donald Trump was hinting at military action to help overthrow Venezuelan President Nicolás Maduro and put opposition leader Juan Guaidó in his place.

The new president of Brazil, Jair Bolsonaro, took office in January 2019, and he hosted Guaidó for a state visit the following month. He also sent humanitarian aid to the border. In response, Maduro shut the border for three months. Hundreds still came on foot.

By the time the border finally reopened in May, the Brazilian military had been deployed to help the incoming Venezuelans. All three branches of the country’s armed forces have roles in a sprawling encampment set up to receive the migrants. 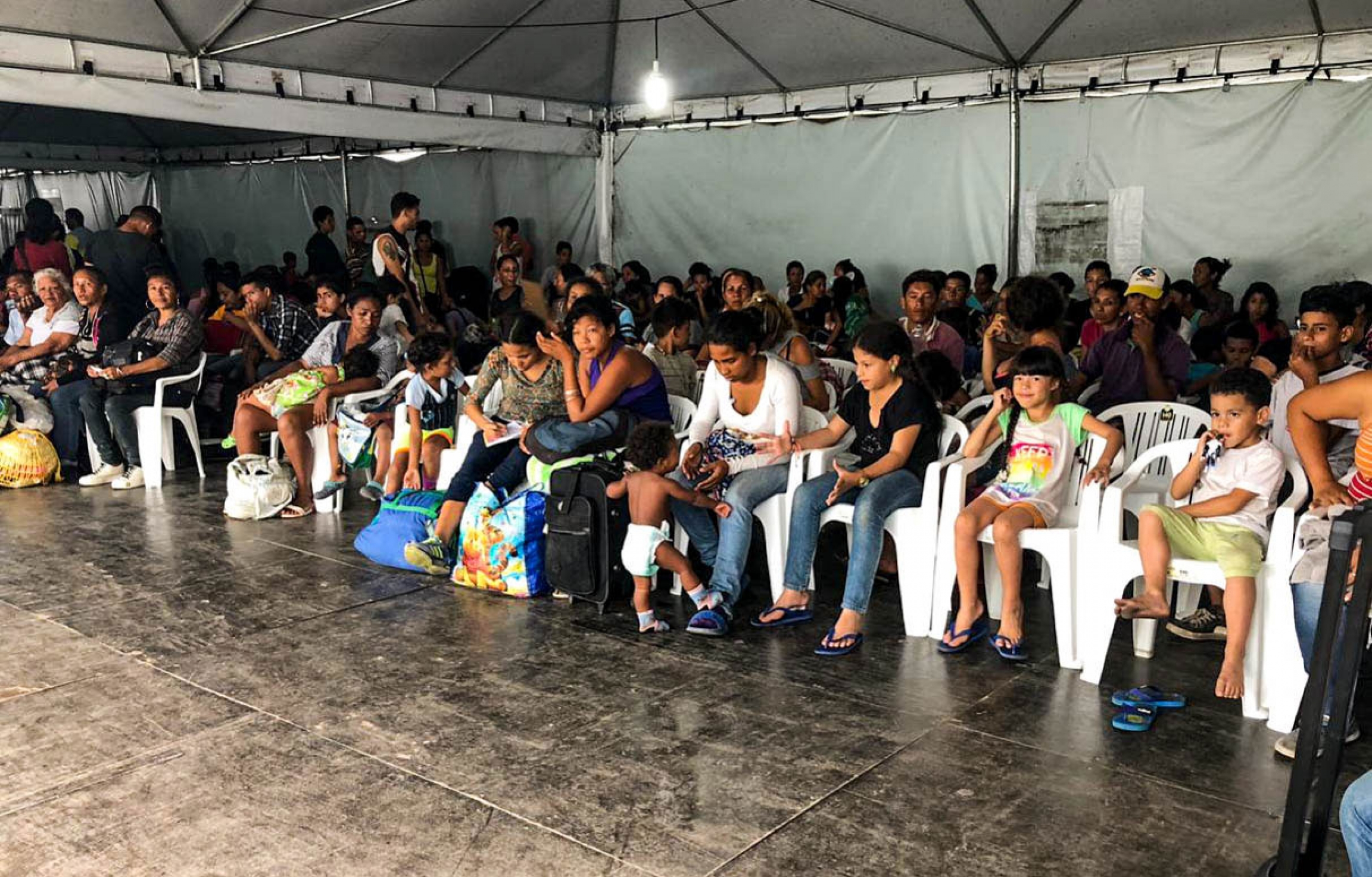 Venezuelan families wait for hours in the sprawling Brazilian military encampment. The go to a series of appointments as they come into the country, to complete their documentation or get mandatory vaccines.
Credit:

Inside one tent, in a big room with wooden benches, families wait for hours for a series of appointments to get their documents or health check. There are mandatory vaccines. If need be, families stay in small, white buildings subdivided into rooms filled with bunk beds. People lay on thin mattresses, reading magazines or sleeping.

The atmosphere here is respectful and relaxed — and that’s surprising, given what Bolsonaro’s said about immigration. When he was a congressman, he called refugees “the scum of the Earth.” And he’s supported Trump’s immigration policies.

Related: US-backed aid to Venezuela harkens back to a dark history

“The vast majority of potential immigrants do not have good intentions or do not intend to do good to the US people,” he told Fox News during a visit to the US.

Still, on the ground, Brazil is much more welcoming to migrants than the US — for now.

“Our goal ... is humanity ... to treat the human being. I have a family, I have a wife, I have children. I try to look after them as if they were my own children and family members. I take care of them from that perspective.”

“Our goal ... is humanity ... to treat the human being,” Maj. Andre Albuquerque said in Portuguese. He runs one of the largest family shelters in the state capital, Boa Vista. It houses more than a thousand people and is almost full. Venezuelans who need shelter are brought here after going through the entry process three hours away in Pacaraima. “I have a family, I have a wife, I have children. I try to look after them as if they were my own children and family members. I take care of them from that perspective.” 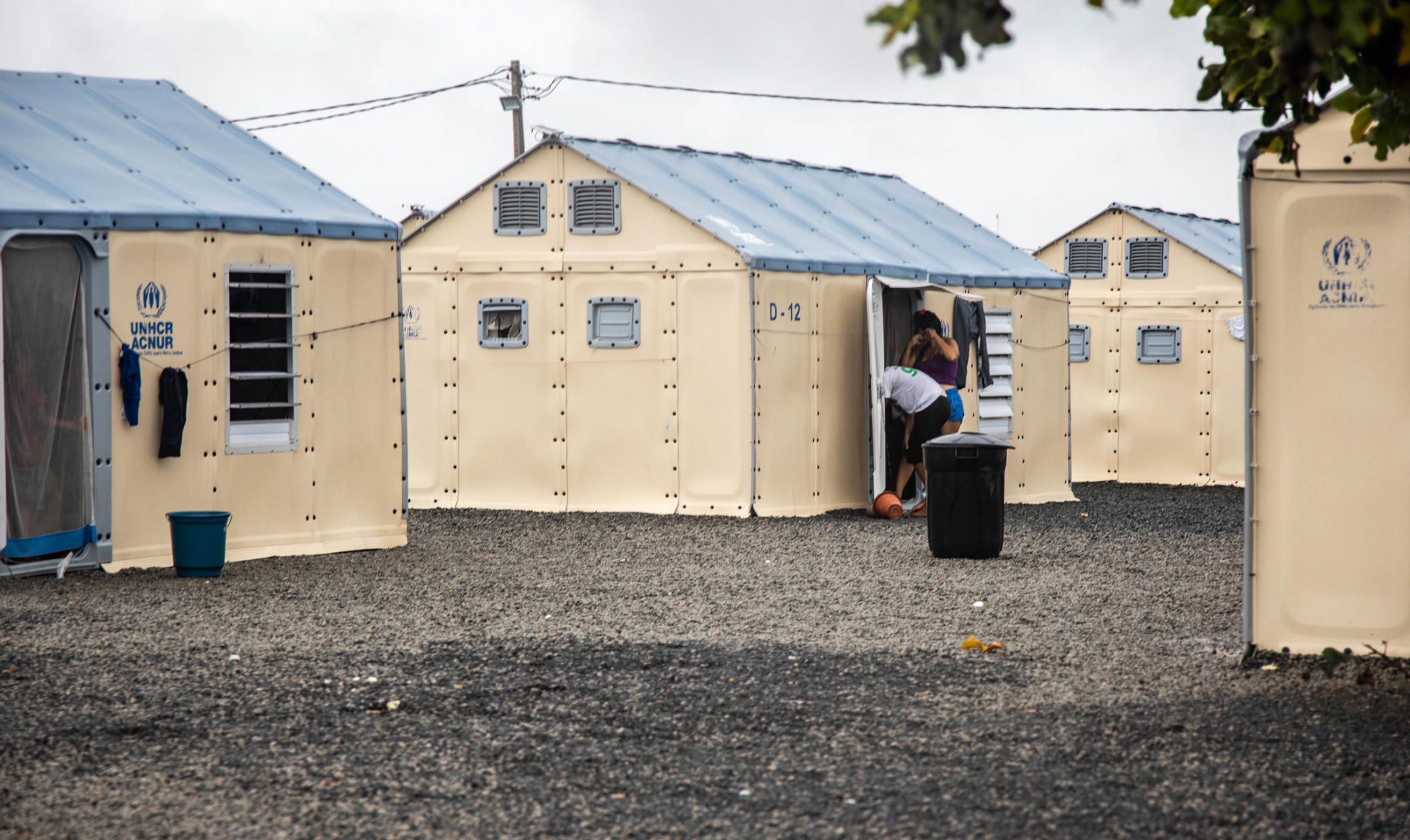 From the border in Pacaraima, Venezuelan migrants are bused three hours to the state capitol, Boa Vista, where the United Nations refugee agency has set up shelters for thousands of families.
Credit:

Brazilian efforts don’t end at just providing shelter. The country has set up a system to integrate arriving Venezuelans by sending them to other parts of the country. Unlike in the US, migrants, once documented, can work in Brazil immediately, even though one-quarter of the country’s workforce is unemployed or underemployed. About 5,000 of the roughly 96,000 Venezuelans Brazil has received have been relocated to jobs across the country.

“It’s a very unique program, to be honest,” said Darryl Huard, a Canadian with the United Nations refugee office. He says it’s rare for the UN to work so closely with the military, but in this case, it’s working. “I mean, you can look around you — it’s amazingly well-organized.”

Well-organized — and well-funded. Huard says countless organizations are helping here — like international, nongovernmental organizations UNICEF and USAID. A lot of the financial support has long come from the US, Huard says — despite what’s happening on the US-Mexico border. 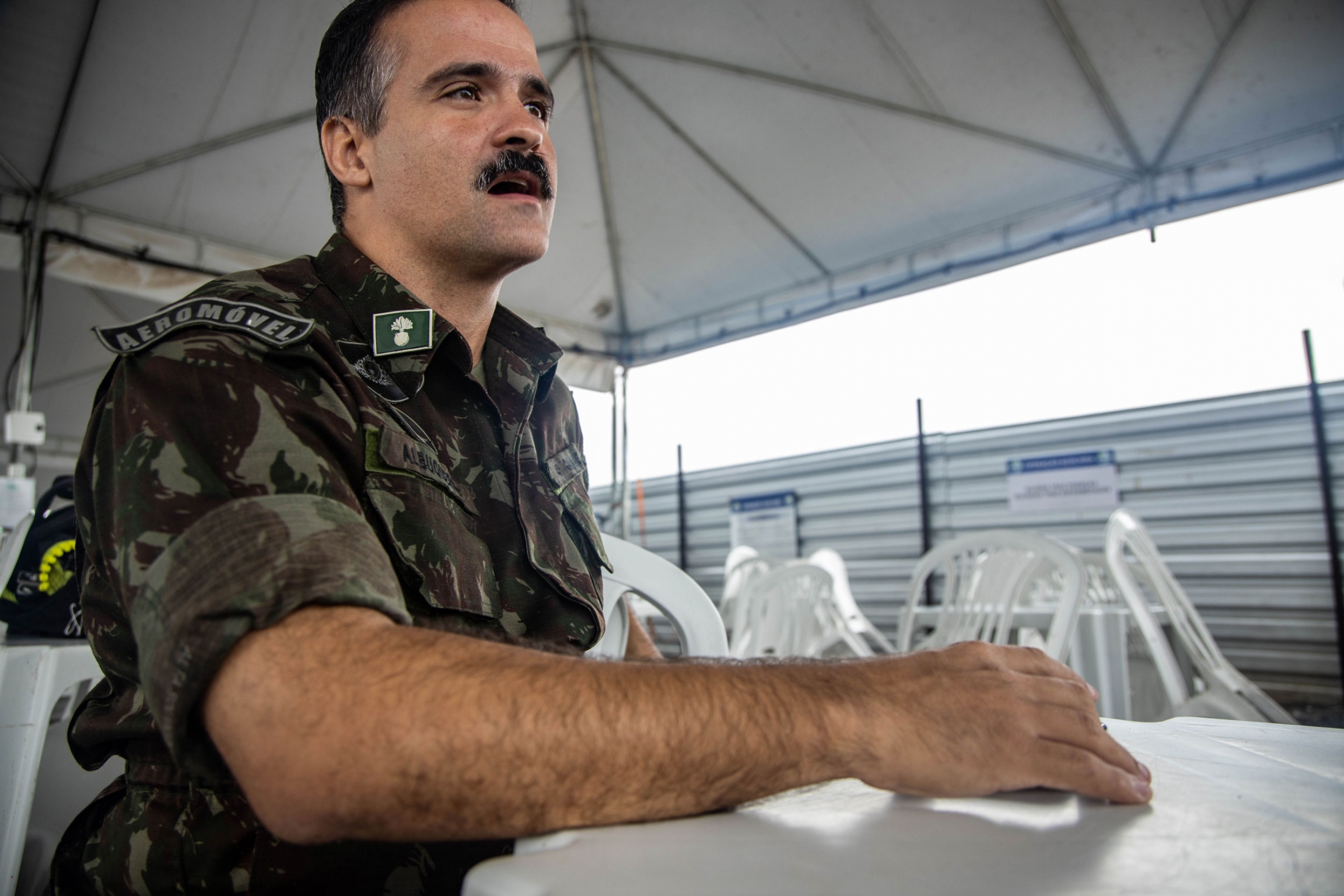 Major Andre Albuquerque runs one of the largest family shelters in the state capital of Roraima, Boa Vista.

In 2018, the US gave the UN refugee agency $17.3 million to help with Venezuelan migrants. That’s increased to $27.5 million so far this year.

“I don't want to be critical at all because realistically, what's happening there is very unique. But in terms of the support the US government and the American people give, in general, through NGOs, it’s extremely important and it's a huge portion of what we do comes from the US.”

“I don't want to be critical at all because realistically, what's happening there is very unique. But in terms of the support the US government and the American people give, in general, through NGOs, it’s extremely important and it's a huge portion of what we do comes from the US,” Huard said. “So, the American people are doing a really good job — just maybe that's not being shown enough in the media because they're doing it indirectly.”

But there’s always the possibility that US funding could be cut.

And, despite all the effort and money, there are people who are left behind — like single Venezuelan migrants who sleep for weeks at the bus station because they can’t get into shelters. Or people who choose not to be relocated, like Ruber Maneiro and his family.

“This bone here, she has a bone spur,” Maneiro said in Spanish, lifting his 2-year-old daughter Raquel to show her back. He says she was in a hospital for months and still needs an operation. “But I haven’t gotten anywhere. They tell me that state can’t help me out, that they don’t have the resources.” 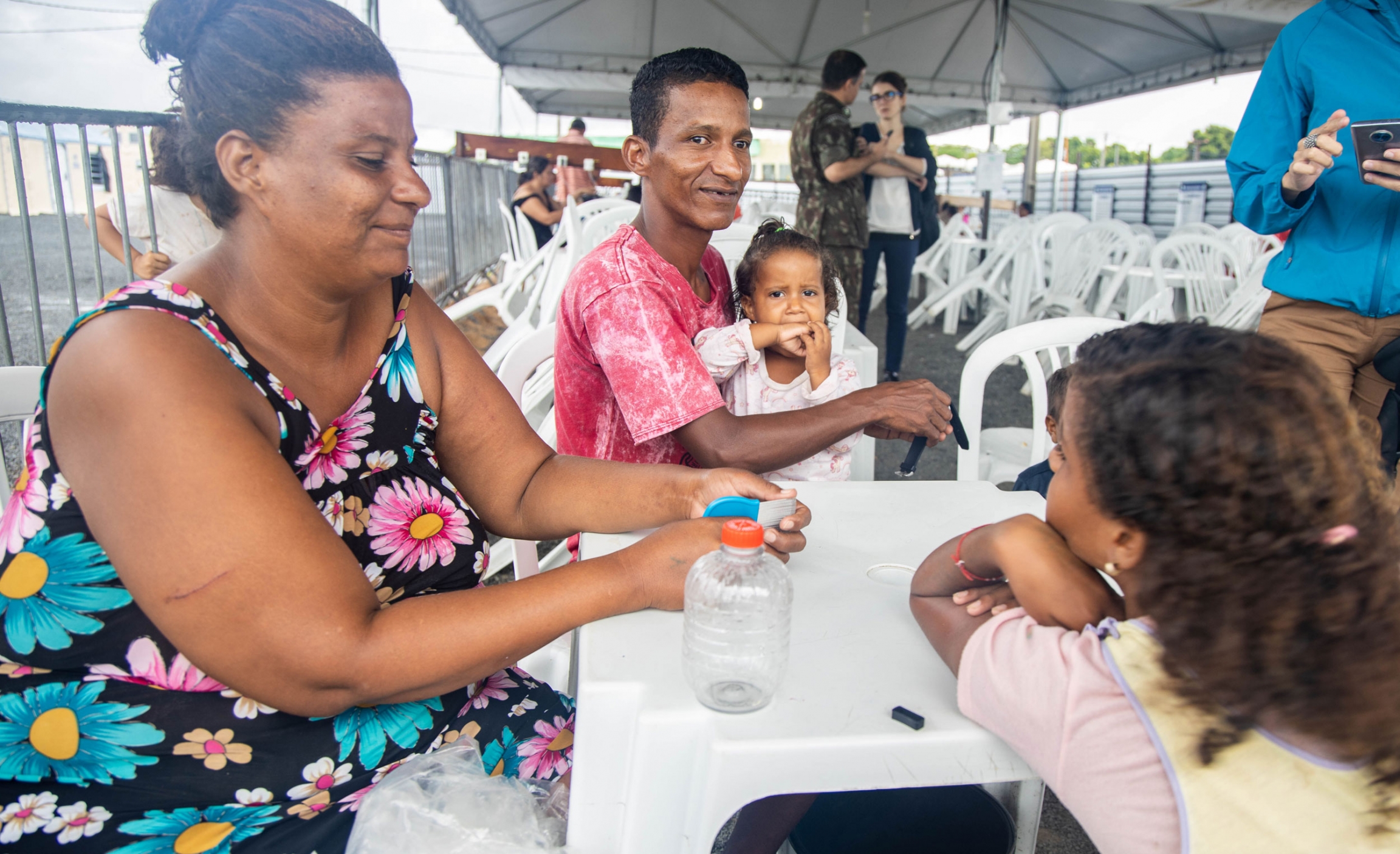 Ruber Maneiro and his family have lived at a shelter in Boa Vista, Brazil, for a year. He’s holding 2-year-old Raquel, who has a bone spur and needs an operation.

He still thinks she has a better chance to get an operation here, where the military is mobilized to help refugees. So, he hasn’t enrolled in the voluntary relocation program.

Maneiro admits there’s another reason, too.

“I’m hoping that one day Venezuela changes, that Maduro leaves,” he said. “It’s not so nice to live like this.”

He dreams of their life back in Venezuela, and of reuniting with his parents, who are still there. For now, on many nights, Maneiro and his family sleep on mattresses wet with rain, remembering to be grateful for shelter, and grateful to the Brazilian government.