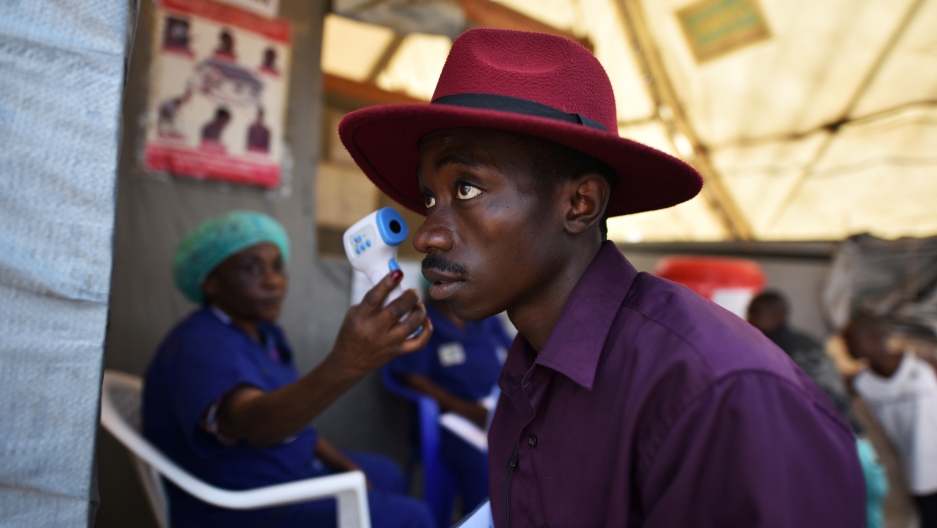 A health worker checks the temperature of a man as part of the Ebola screening upon entering the General Hospital in Goma, the capital of North Kivu province in the eastern Democratic Republic of Congo.

The Ebola virus epidemic that began in Democratic Republic of Congo nearly a year ago has since killed more than 1,600 people.

The Ebola virus has been difficult to manage and contain in DR Congo due to internal armed conflict, mistrust and disinformation.

In June, three Congolese travelers crossing the border into neighboring Uganda carried the Ebola virus, becoming the first reported cases of Ebola in Uganda via DR Congo, confirming fears that the virus could spread to neighboring countries due to "frequent, informal and porous cross-border migration." Ugandan authorities quickly activated their Ebola rapid response system to contain the virus.

This week, the virus reached the Congolese city of Goma, on the border with Rwanda, home to about 1 million people. The patient was a priest who became infected and later died. The World Health Organization described the discovery in Goma as a game-changer and the new case prompted an emergency meeting of international health leaders on Tuesday.

David Gressly is the Ebola response coordinator for the United Nations in DR Congo. He spoke with The World's Marco Werman about what the situation in Goma means for Ebola response plans in the country.

Marco Werman: Tell us what you know about this case in Goma. In what ways is it a big deal?

David Gressly: Well, the main concern is that it flows outside the area where this virus has been circulating for the last year; it's come much further south. More importantly, it's what Goma represents. It's a major transport hub for the country, but also outside of the country. Of course, it's along the border with Rwanda. It's a large urban area and if a chain of transmission starts in large urban areas, it's quite complex to manage. This is something that we had feared might happen, and now that it has, the preparedness that's been put in place over the last few months is now starting to kick in. It's a serious issue, and we're quite concerned about it.

Elaborate a bit more on Goma itself — where it is and why this particular city represents a challenging and fragile moment in the progression of this outbreak.

Well, it's by far the largest urban area on the eastern side of the country. It's surrounded by areas of conflict that have been going on for the last 20 years. It's also an area of commerce, both in and outside the country. Goma itself is relatively secure. It's a diverse population, as well, with people coming from different parts of North Kivu province. On the other hand, there are a lot of preparations already in place. The Ebola treatment center here is being made operational as we speak. What I should say, in addition, is that the individual who did arrive was immediately identified as a potential Ebola suspect and was isolated immediately. He has now been transferred back to Butembo, which was the original start of his trip here. We also have work to do not only in Goma, but on the whole path from where he's started actually in Beni, then Butembo and then Goma.

Editor's note: Since this interview was recorded, the patient has since died and no new cases have been reported in Goma. Health officials have identified 60 people who came into contact with the patient and 30 so far have been vaccinated.

It really shows all the precautions that you need to take over a wide stretch of geographical area. In this meeting that you took part in with these other international health leaders, did any countries commit new money to this crisis? How much urgency and concern have grown around this individual in Goma who has contracted Ebola now?

The meeting was scheduled already as a way of looking at the next phase of the response. It was decided that there's a need to take a multisectoral approach to this, bringing in different government ministries, and of course, from our side and the international community, likewise, looking at different issues of security and how to support that with the peacekeeping mission, but also with humanitarian assistance coming in.

The case in Goma resonated very well in the meeting because it's a reminder that there is no place for complacency here.

Since this outbreak began last year, there are currently more than 1,600 deaths reported and a number of health care workers who have been killed. As you look into the coming months, what are you planning for in terms of best-case and worst-case scenarios?

I'm working for the best. I think we have to do two major things: No. 1, we really have to find ways to stop the interruptions to this response due to insecurity, due to political protests and due to nonpayment of salaries. Any stoppage that lasts for more than a few hours allows the virus to continue to multiply, and if it's for two, three, four or five days, you get a significant increase in cases. You can't afford these interruptions. Secondly, we need to make sure we're not blind — that the virus can't go somewhere and propagate undetected and then we only see it when there's many cases suddenly coming forward. In at-risk areas where there's no virus circulating right now, we need really good surveillance and we need really good contact monitoring those areas. This whole epidemic became a major problem because it went undetected for more than three months before the epidemic was declared in August. That allowed it to create multiple chains of transmission that have been very difficult to track and trace. We can't afford for that to continue to happen. So, we have to work to end the interruptions, to end the blind spots and bring this thing to closure.