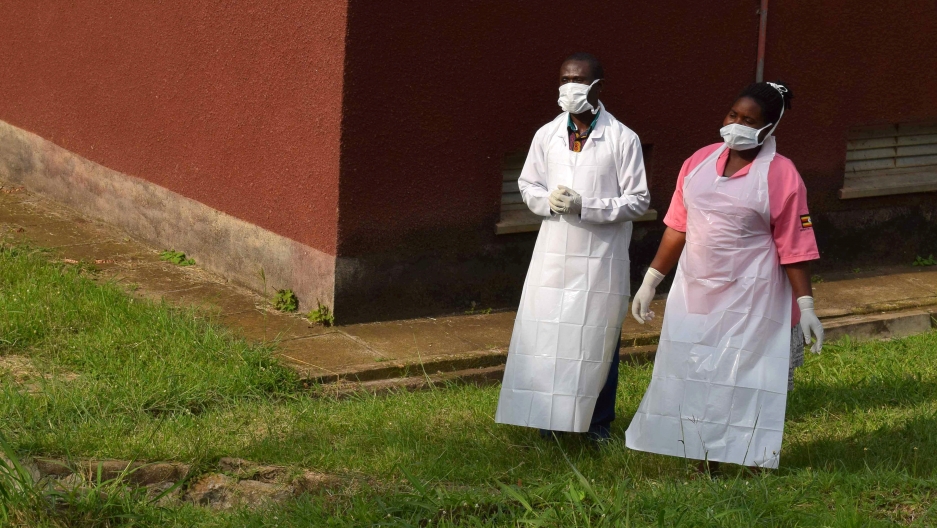 Ugandan medical staff are seen as they inspect the Ebola preparedness facilities at Bwera General Hospital, near the border with the Democratic Republic of Congo in Bwera, Uganda, June 12, 2019.

On June 12, Ugandan officials from the Ministry of Health released a press statement confirming two Ebola cases. A 5-year-old boy and his grandmother, 50, tested positive for Ebola on June 10 and died two days later. A younger brother, 3, is being kept in isolation, along with a 23-year-old man unrelated to the family, at a hospital in Bwera, on the DR Congo-Uganda border district of Kasese, western Uganda.

The family of three were traveling to Uganda from the neighboring Democratic Republic of Congo:

PRESS RELEASE: 5 year old boy who traveled from DRC on 10 June and tested positive for #Ebola died this morning.
2 new confirmed cases of #Ebola- grandmother and a 3y/o sibling to the deceased are currently isolated in Bwera Hospital Ebola Treatment Unit. pic.twitter.com/606n4CBjgi

Ebola is a rare, often fatal virus that spreads through close human contact with fluids like blood, feces and vomit. According to the Center for Disease Control, the disease gets its name from the first case discovered in 1976 near the Ebola River in what is now the DR Congo, with outbreaks in several African countries as well as England, Italy, Russia and the Philippines. Symptoms include high fever, severe headache, muscle pain and unexplained hemorrhaging.

Neighboring DR Congo has been battling an Ebola outbreak in North Kivu Province since August 2018, that has been difficult contain due to armed conflict, disinformation and mistrust. The latest figures from DR Congo's Ministry of Health show that nearly 1,400 people have died in DR Congo of the Ebola Virus Disease (EVD) since August 2018, but the World Health Organization has hesitated to declare it a “Public Health Emergency of International Concern,” or “PHEIC” — until now.

Number of Ebola cases in the DRC has increased by 51 in the last 7 days.
Latest figures from Ministry of Health show 1,396 people have died since outbreak began in August 2018 #rdc #drc pic.twitter.com/0vTX9cueip

With close proximity to Uganda, these cases have confirmed fears over the likelihood of Ebola cases appearing at some point, due to frequent, informal and porous cross-border migration. In August 2018, when the Ebola virus broke out in North Kivu, Uganda kickstarted Ebola preparedness and surveillance activities in 22 districts bordering DR Congo to prevent the disease from crossing into Uganda.

The Ministry of Health set up Ebola Treatment Units (ETUs) at Bundibugyo General Hospital, Bwera Hospital in Kasese, where the boy and his grandmother were treated and died, and Rwebisengo Health Center in Ntoroko district. 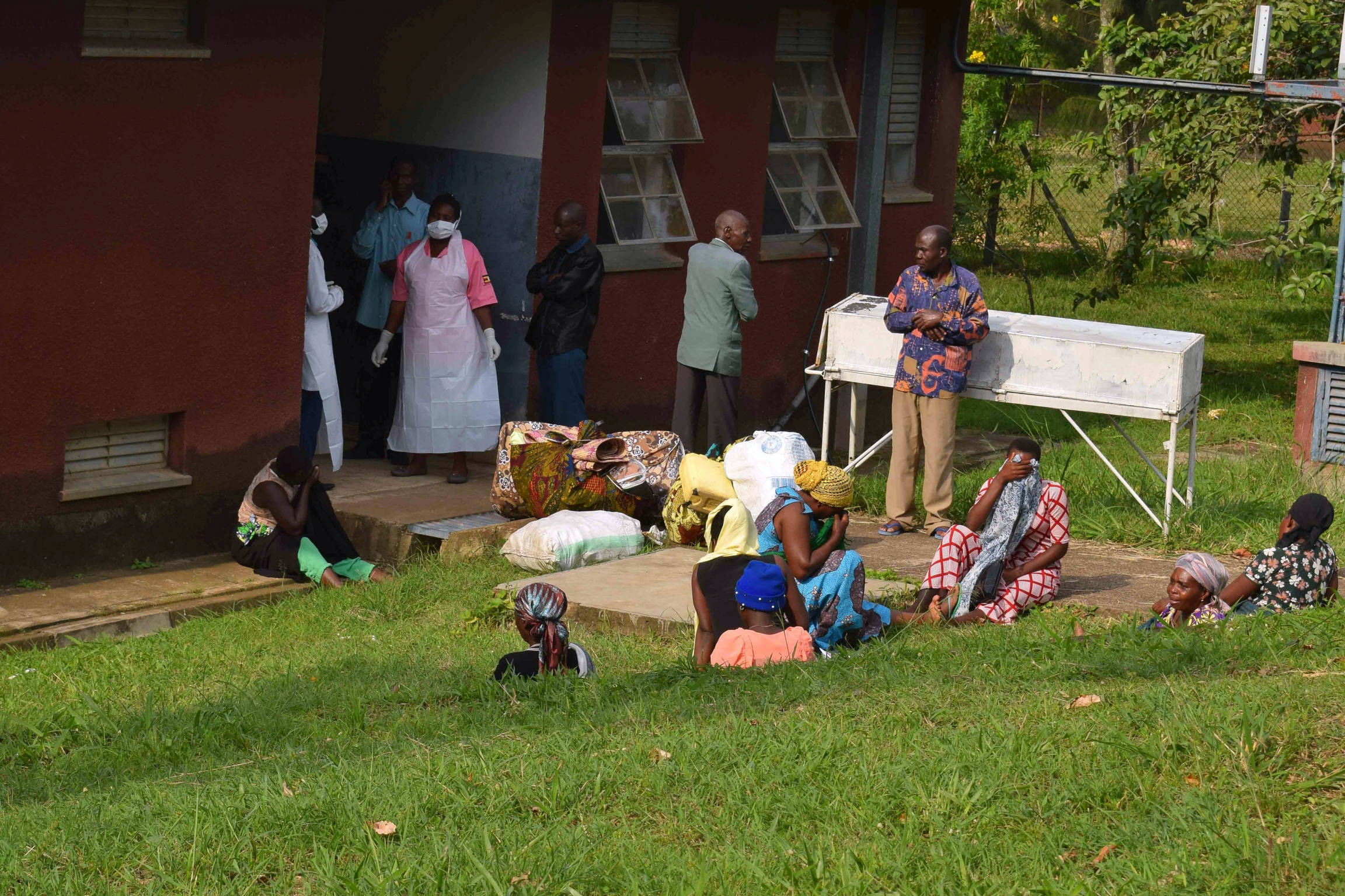 People are seen in the courtyard as Ugandan medical staff inspect the Ebola preparedness facilities at the Bwera general hospital near the border with the Democratic Republic of Congo in Bwera, Uganda, June 12, 2019.

This is not the first time Uganda has confronted Ebola, but these are the first reported cases in Uganda carried into the country via DR Congo's current Ebola crisis.

Now that Ebola has spread to Uganda and potentially other countries like neighboring Rwanda and South Sudan, WHO is calling an emergency meeting on June 14 in Geneva to discuss the potential designation of the crisis as a PHEIC:

Following the spread of #Ebola to #Uganda from #DRC, I am reconvening the IHR Emergency Committee on 14 June in Geneva to ascertain whether the outbreak constitutes a public health emergency of international concern. This will be the 3rd meeting of the committee on this outbreak. pic.twitter.com/tchEuKmu6k

Tedros Adhanom Ghebreyesus, director-general of the WHO, commended the Ugandan health ministry for recognizing the need for nationwide action to prevent the spread of Ebola. He says that Ugandan officials vaccinated nearly 4,700 health workers in 165 health centers, including the hospital where the infected boy and grandmother were treated before they died:

#Uganda has vaccinated nearly 4,700 health workers in 165 health facilities - including the facility where the infected child is being cared for - as part of their preparedness for a possible imported #Ebola case during the current outbreak in #DRC https://t.co/pWiYriVdbk

According to a WHO report from 2018, Uganda's Ministry of Health began to strengthen its Ebola response system. Activities include “strengthening surveillance, capacity-building in contact tracing, laboratory diagnostics, infection prevention, and control, [and] clinical management of patients including psychosocial care, safe and dignified burials, enhanced risk communication and community engagement.”

Temperature screening at Mpondwe border point in Kasese district. Mpondwe is a border point between #Uganda and #DRC #Ebola pic.twitter.com/gUfys3j6ZT 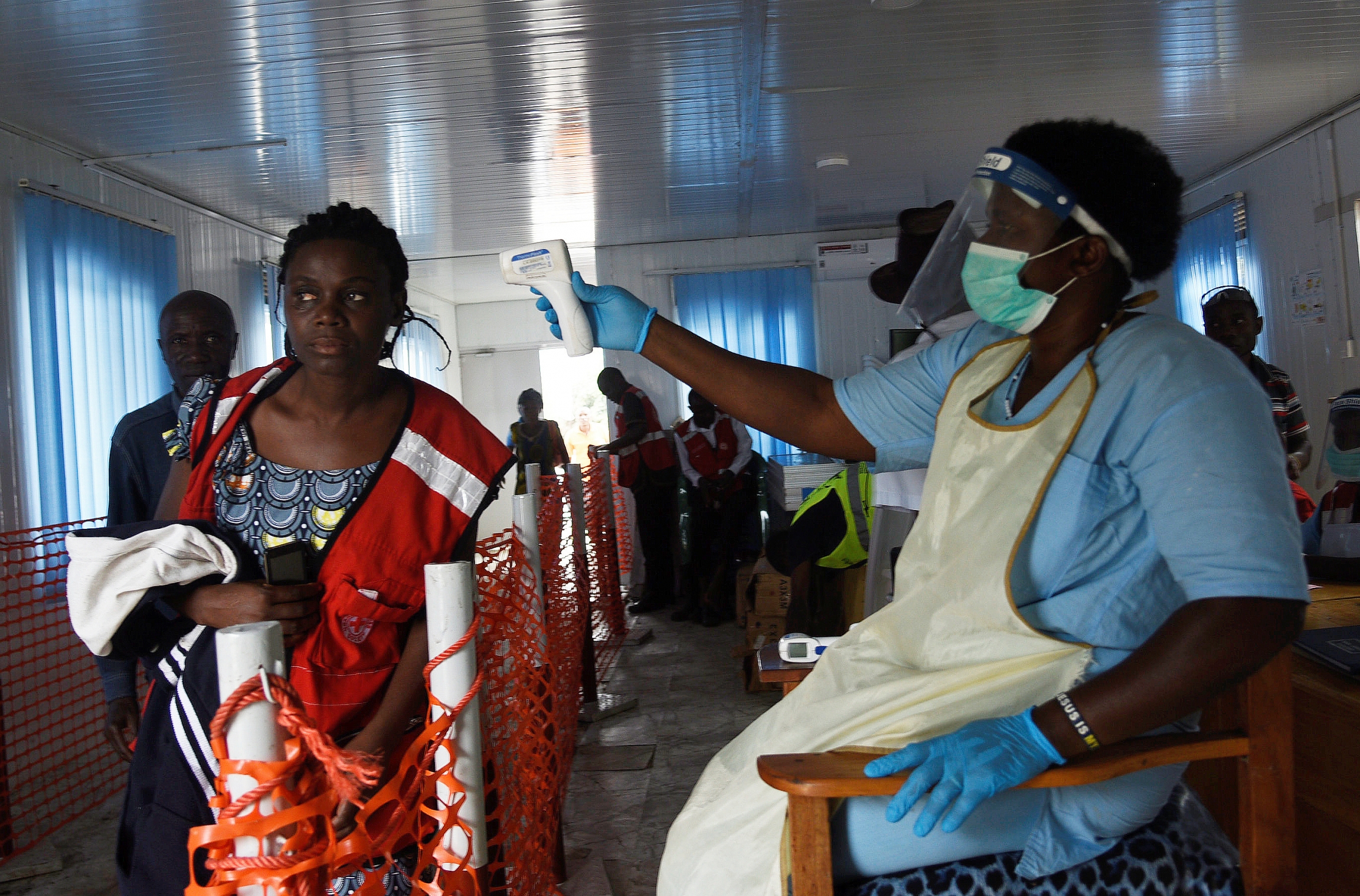 A health worker checks the temperature of a woman as she crosses the Mpondwe border point separating Uganda and the Democratic Republic of Congo as part of the Ebola screening at the computerized Mpondwe Health Screening Facility in Mpondwe, Uganda, June 13, 2019.

Uganda has called on communities to halt border markets in the wake of its confirmed Ebola cases:

Govt of Uganda Call on communities at DRC-Uganda border to halt all market days & mass gatherings/weddings/burials.
This is after a 5 year old boy died from Ebola in Kasese this morning.
Also confirm 2 more cases- his 3 year old brother & grandmother. pic.twitter.com/gbVKDpPm3F

Since last year, health educators have gone door-to-door to make visits and educate people and Ebola messages also run on TV and radio.

Ugandan netizens have expressed fear about the new cases but also praise for the Ugandan government's quick response and proven commitment to detection and prevention:

Credit to the #Uganda Ministry of Health and ground teams for their swift #ebola protocol activation; wishing success to all the containment personnel. https://t.co/M9Knwtne8r

This is not the first time Uganda has faced Ebola and managed to contain it, though the strain is different this time:

Interesting #Ebola factoid: Though #Uganda has had 5 previous Ebola outbreaks, none were caused by Ebola Zaire, the strain responsible for the DRC outbreak. In fact, Uganda had the 3rd largest outbreak on record, at Gulu in 2000-01. They have experience with Ebola. pic.twitter.com/OOQwO8rmfi

In 2012 alone, Uganda dealt with two Ebola outbreaks that left 21 one people dead. Uganda's record in responding to epidemic viral diseases is starkly different from many countries in the region because of its heavy investment in the Uganda Virus Research Institute (UVRI) and its standing as a “world leader in virus surveillance.”

Uganda now faces a unique threat because the outbreak has spread from neighboring DR Congo, with its long borderline and an unrelenting Ebola outbreak.

Uganda has banned public gatherings in Kasese district. WHO reassured, however, that movement across the DR Congo-Uganda borders has not been restricted at this time.

A version of this story originally appeared in Global Voices.