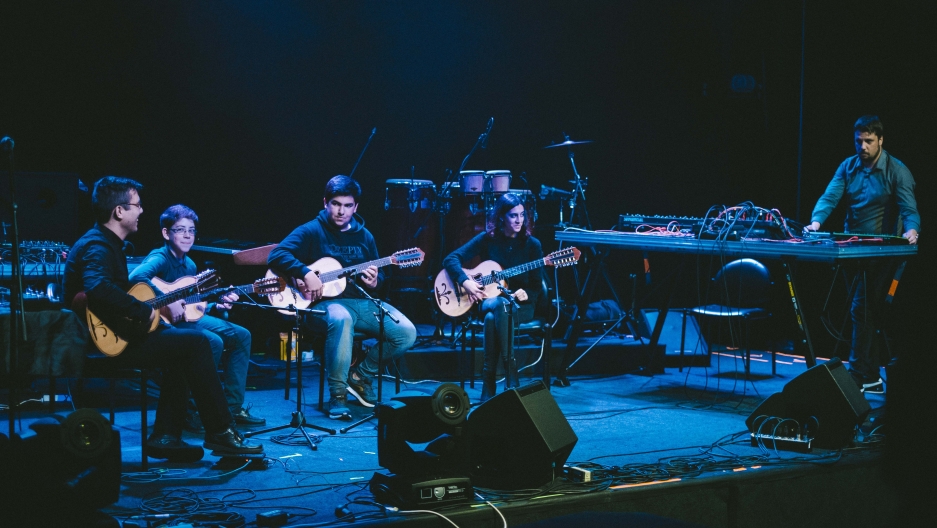 Musician Rafael Carvalho (left) and his students perform on stage at the Tremor Festival in April 2019, held annually on the Azores' main island of São Miguel. The nine Azores islands are a Portuguese archipelago in the mid-Atlantic Ocean.

Musician Rafael Carvalho tunes his viola da terra, a 12-stringed, double-hearted small guitar and begins to play a sweetly wistful melody. As he plucks away at the strings, Carvalho’s viola fills the room with poignant music described in Portuguese as saudade — which captures a longing for family and friends who have emigrated abroad and nostalgia for the homeland left behind.

Carvalho, 38, is from the small fishing village of Ribeira Quente in the Azores islands, a remote Portuguese volcanic archipelago in the Atlantic Ocean. In the last century, emigration brought hundreds of thousands of people from the Azores to North America in search of better economic opportunities. That included Carvalho’s own family members, who emigrated to Canada and the US.

About a million North Americans were born in or descend from the Azores — four times more than the current population of these islands. The majority live in southeastern Massachusetts, Rhode Island and California. Following major periods of emigration between 1880 and 1920, and peaking in the mid-1960s, by the 1970s, Azoreans owned and operated about half of all dairy farms in California’s Central Valley.

This history of emigration has influenced the musical style of the islands, notably in Carvalho’s music.

“Saudade is missing someone who is not with us, missing our family. It’s missing all the things that make us complete,” Carvalho says. “Azorean people have always lived with saudade, because families were divided. The ones who are not here also have saudade, they miss home.”

The viola da terra, which means viola “of the land,” has a special meaning on the Azores — it almost disappeared from the islands as people emigrated over the decades.

“When I was learning from my professor, he said he would teach me, but that I also had to teach someone else,” Carvalho says. “I only had six months of classes with him, then he got sick, so I had to learn by myself.”

At age 15, Carvalho became the instructor. “I started to teach my friends what I knew.”

But the fact Carvalho is in the Azores is also a stroke of luck. Before he was born, his parents went to Canada to work in factories — his father painted frames and his mother sewed clothes and also cleaned houses. A few years later, they returned to the Azores with enough money to build their own home. Turns out Carvalho would become the most prominent Azorean viola da terra player years later, keeping the instrument alive.

Related: In the 1930s, an ethnomusicologist tried to preserve the history of immigration in California — and combat anti-immigrant feelings — with song

Carvalho’s family is just part of the long history of emigration from the Azores. In the 1800s, American whaling ships traveling the mid-Atlantic stopped in the Azores to replenish supplies. During these pit stops, they also recruited large numbers of Azoreans to work as sailors. According to the Azorean Emigration Museum, the Portuguese crew on American whaling ships increased to 60% by the year 1920 and many ships had Portuguese captains.

These ships traveled back to the whaling hubs of Massachusetts and Rhode Island, where many Azoreans workers found jobs and settled. As the whaling industry declined, Azoreans moved into manufacturing, textile mills and farm work.

Many also migrated westward to California during the gold rush, and later to work in the lucrative dairy farming industry. Whale ships also hunted in the Pacific, and Azoreans sailors disembarked in the Hawaiian Islands, where they were recruited to work in the sugar cane, coffee and sweet potato plantations.

When a volcanic eruption devastated one of Azores’ nine islands in 1958, then-senator John F. Kennedy pushed through the Azorean Refugee Act, authorizing 1,500 special immigrant visas to families affected by the natural disaster. The US government increased the number of visas, allowing permanent residency for even more Azoreans.

Related: A family split between the US and Haiti dreads looming loss of legal status

In the years that followed, poverty and a lack of employment in Azores under Portugal’s right-wing dictator António de Oliveira Salazar led to the archipelago’s highest levels of emigration. More than 175,000 Azoreans moved to the United States between 1960 and 1980. According to the Azorean government, more than a quarter of the population left the islands in a three-decade span during the 1960s, ‘70s, and ‘80s. 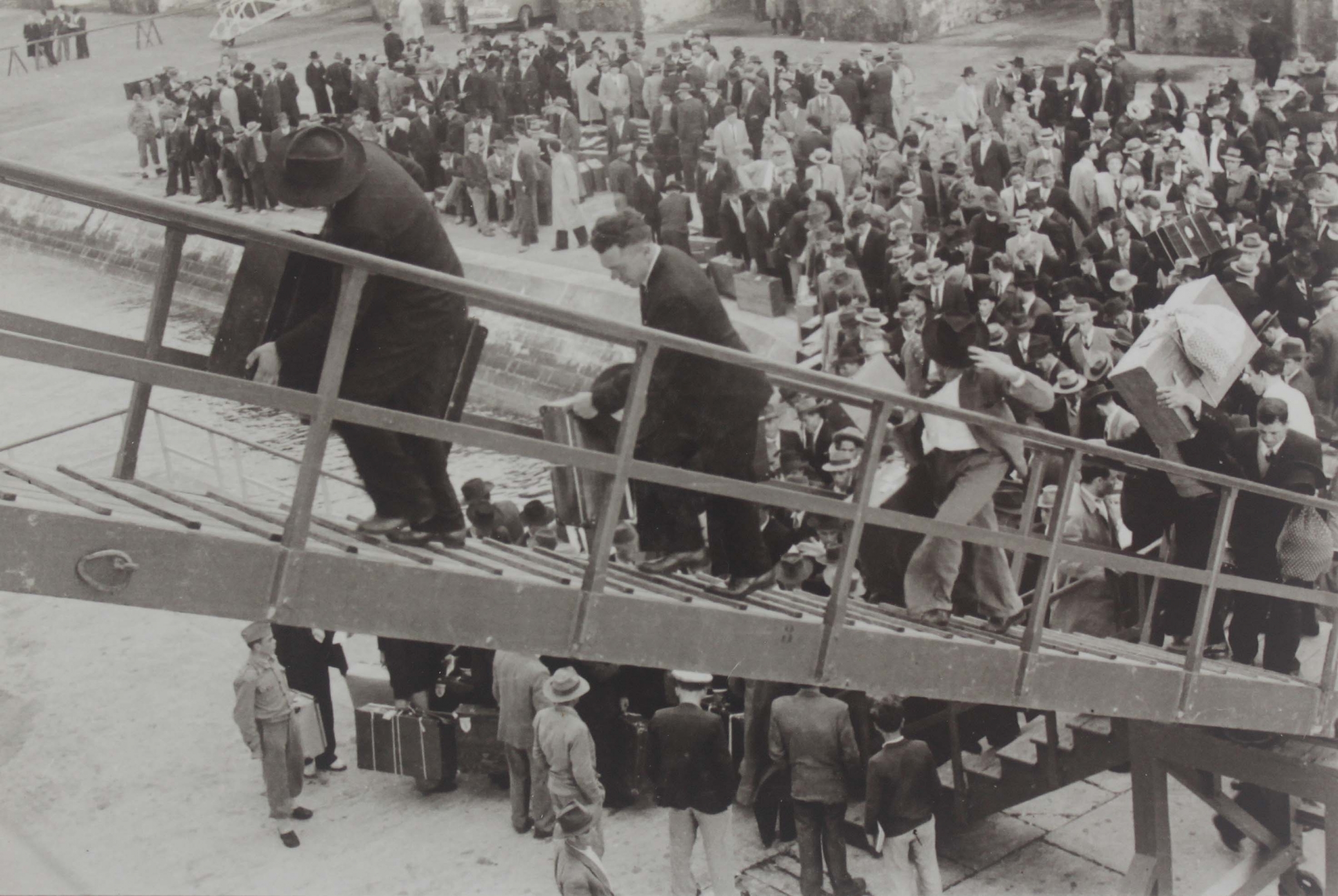 People from the Azores islands board the SS Homeland en route to North America on March 22, 1954. The history of emigration gave the Azores a musical legacy, one that captured the feelings of loss, separation and emptiness.

Courtesy of the Azorean Emigration Museum

“People left from the poorest and smallest communities where it was hardest to reach,” says Inês Dias, an Azores-based journalist with the news agency Lusa. “These places suffered the most, because they got really deserted.”

As younger people emigrated, the elderly who stayed behind had no one left to farm the land.

The socio-economic situation began improving in the Azores after Portugal’s revolution of 1974, when a mass democratic uprising overthrew Salazar, who had ruled the country for 40 years. Under the new democratic government, the islands moved into a more modern era, including building better infrastructure and roads.

“After fascism went down, we started to live better and have more contacts with outsiders,” says Correia, the museum coordinator. “The island developed faster than it used to.”

As the population dwindled over the years, only two viola da terra players remained in Carvalho’s village. For a time, there was only one instrument-maker left who knew how to craft it. Musicians who stayed in the Azores often stopped playing it out of sadness if a close family member left.

“If some musicians’ sons emigrated, most of them would never play again.”

The declining population affected the fabric of life and society in the Azores.

“Before, people would sing and dance and play to forget about the worries of life,” he says. “[Later,] they stopped having fun. They stopped the festivities at night. People started to look at life like you had to work.”

But, the once frowned-upon parties and gatherings made a comeback after Portugal’s new democratic government came to power and fewer Azoreans left, Carvalho says. People were free to enjoy themselves again, he adds. These days, there are even spontaneous dances that last all night long and into the weekend. 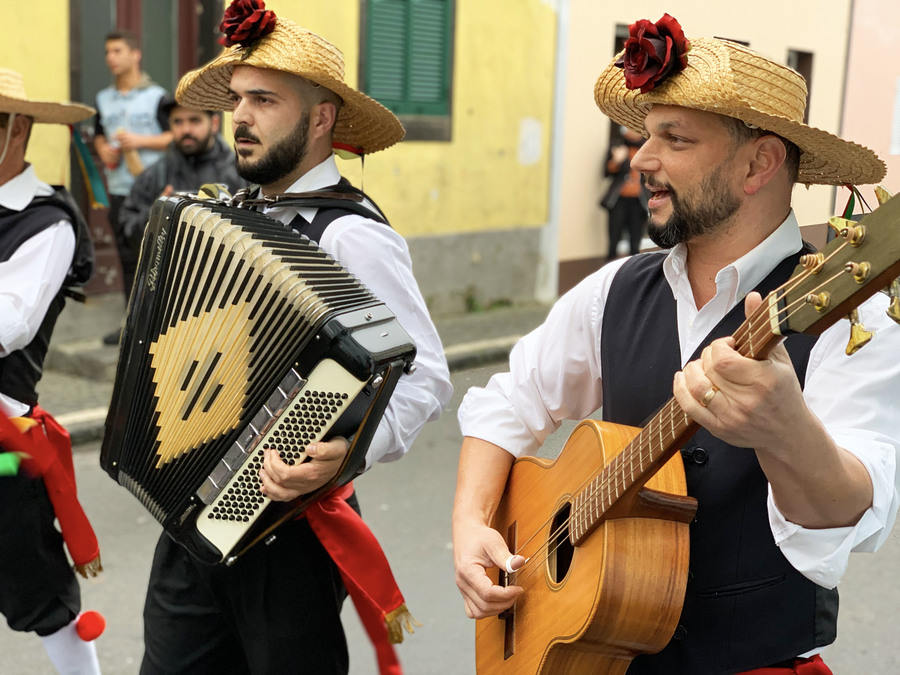 Local musicians sing and dance in the village streets of Rabo de Peixe during the Tremor Festival in the Azores in April 2019.

The history of emigration gave the Azores a musical legacy, one that captured the feelings of loss, separation and emptiness.

“Emigration is a big part of who we are, living apart from our families, writing letters on Sundays.”

“Emigration is a big part of who we are, living apart from our families, writing letters on Sundays,” Carvalho says. “So, it’s helped create some of our songs and melodies that people would play differently, with other feelings.”

He says saudades are his favorite genre to play.

“For all the music we play on viola da terra — and we have hundreds of melodies — saudade is the most meaningful, and for me, the one that expresses the best sound of the instrument.”

“They start crying, they feel the music connects to them, is speaking to them,” Carvalho says. “And, sometimes they spontaneously start singing in the audience when I play the happy, festive songs.”

Carvalho is also modernizing the music of the viola da terra for a new, younger audience of listeners. He’s experimented with sounds and composed his own variations of instrumental songs, as heard on his albums. He hopes to take the instrument’s revival a step further — teaching his instrument in all schools across the Azores islands. 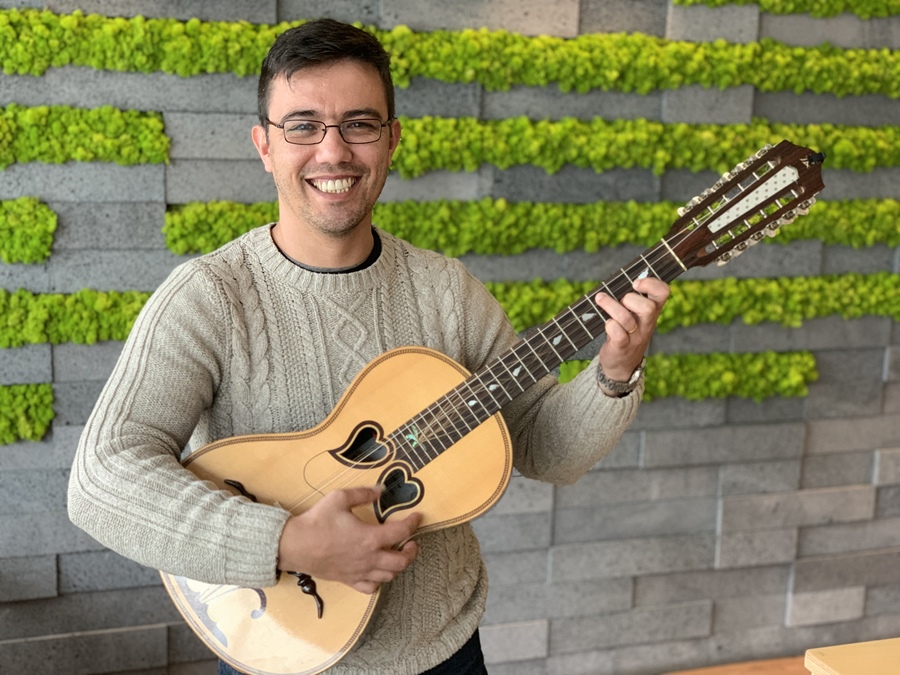 Carvalho, 38, is from the small fishing village of Ribeira Quente in the Azores islands. He is helping to revive the viola da terra musical tradition.

After playing a few songs, Carvalho explains the meaning of the two hollow hearts in the center of his wooden viola da terrra.

“One of the hearts stayed in the islands, and the other heart went away for emigration, looking for a better way of life,” he says. “But, they are always connected with these chords, which my teacher would call the umbilical cord.”

For Carvalho, this instrument has come to represent the islands.

“Viola da terra for me is the sound of the Azorean people. It’s our most unique way to show our Azorean feeling,” he says.