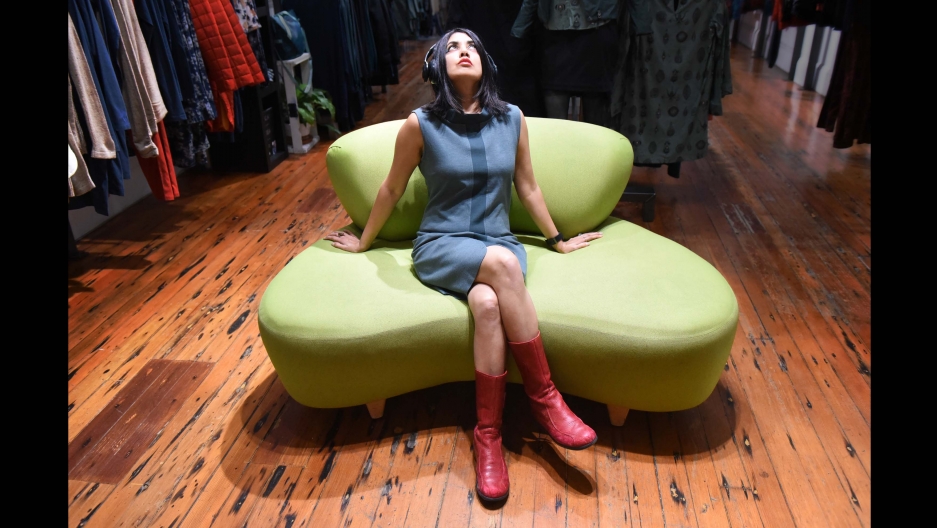 Micropixie is an alien. She comes to Earth and is reincarnated as a human called Single Beige Female. The United Nations invites her to speak. The visit is captured in a short, animated video.

“I was made in Bombay, or rather Mumbai, and born and raised in the UK,” Single Beige Female said over music. “I grew up in London. For part of my 20s and 30s, I lived in Paris. And now I reside in San Francisco, that hilly city by the bay, in the good old US of A.”

That timeline is actually the true story of Neshma Friend. Until recently, Friend was an administrator by day at a children’s music school in San Francisco. By night, for 15 years, she’s been producing short videos and music albums about her alter ego, Micropixie.

“The whole ‘being an alien’ thing, that actually came from the fact that I did feel like an alien growing up,” Friend said.

Her grandparents were from Gujarat, India. Her parents were born and raised in Uganda. Friend grew up reading and listening to music, and feeling alone in the world, with many questions about why things were the way they were — why some people were treated differently than others.

“I was told that I was strange for even thinking those things,” Friend said.

She was good at the arts, but wasn’t encouraged by her family to develop those talents.

“Growing up in a South Asian family and also being poor and being the clever one, I was pushed into ‘science-y’ things and anything that was going to get me a lot of money so that the family could be safe from poverty,” Friend said.

As an adult, Friend first followed one of the paths she felt she was expected to take. She did administrative jobs in the corporate world.

“I tried to do what others told me I should do,” Friend said. “I felt very ill in that world. I mean, I was literally ill. I felt like I was losing my mind in that space.”

In 2000, Friend was working for a publishing company in Oxford, England, when she attended a big annual music festival in Glastonbury, about 100 miles away. It was the best weekend of her life, she says, and it made her realize how unhappy she was, in general. Friend quit her job and searched for a new path. While visiting friends in San Francisco, she was out for a walk one night when she passed a bar with a man inside singing.

“And I walked in. He was wearing white. It was like he was a white rabbit or something,” Friend said. “I said, ‘I feel like I’m Alice in Stevie Wonderland,’ and I started writing all these notes and thoughts, and then I went to talk to him.”

That man, Jeff Crerie, became her first producer. Friend didn’t know how to sing, but in 2005, they released her first album, called "Alice in Stevie Wonderland."

“'Alice in Stevie Wonderland' is the true story of one little alien’s mission on Earth to understand what it means to be human,” Friend explained. “That first album is quite experimental and downtempo electronica. The second is more pop and trip hop.”

It took eight years to make the second album, released in 2013. In it, Friend continues Micropixie’s story and kicks the action up a notch.

“It’s called ‘The Good, the Beige and the Ugly.' And that's an intergalactic, feminist spy thriller,” Friend said. “Basically, in that one, Micropixie realizes she is human.”

Friend says she never planned on creating a trilogy. But in April, she and Spanish producer Paco Serén will release her third album, “Dark Sight of the Moon.”

“This last album is the third and final chapter to the 'Alice in Stevie Wonderland trilogy,'” Friend said. “It’s all about Micropixie understanding how things really work on this planet.”

In the album, Micropixie confronts the rise of political nationalism and has realizations about the people who run the world. The “greedy, greedy people who are controlling this planet's wealth,” as Friend put it.

One of the album’s songs, “New Year’s Day,” was featured in The New York Times’ first playlist of 2019.

“My friends will attest, I walk around San Francisco, I've got my headphones on and I'm just like, 'Did I really make this? Is this really me?'” she said.

After years of slow progress, Friend feels like she’s breaking through. She says her songs have helped her realize her own truth, and her family finally accepts her for who she is.