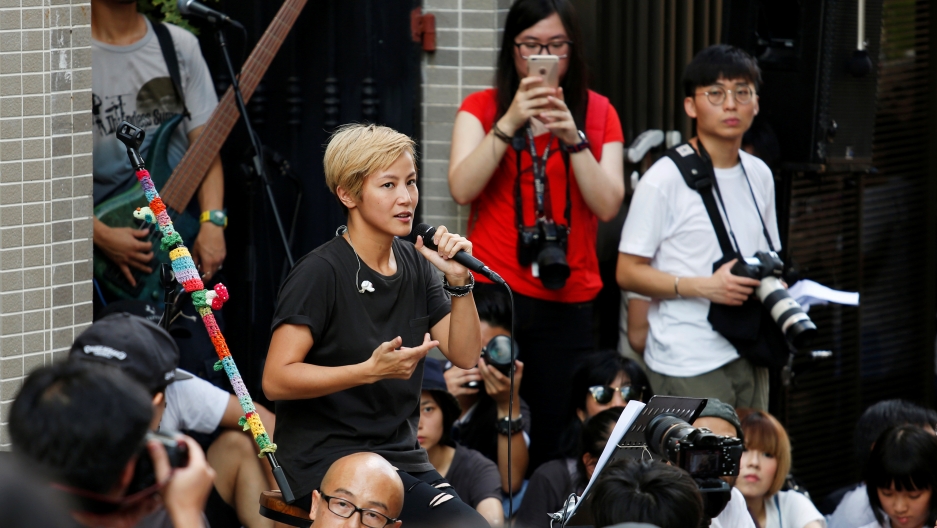 More protests are being planned across China and in Hong Kong for the weekend.

In recent weeks, demonstrators have rallied for some of Hong Kong's largest and more violent protests in opposition to an extradition bill that would allow suspects to be sent to China for trial.

Activists say that the "one country, two systems" status of Hong Kong is threatened.

Among these activists is Hong Kong pop star Denise Ho. Ho is a Hong Kong-based producer and singer and an activist popularly known as HOCC. Ho spoke in front of the United Nations Human Rights Council on Monday and said Beijing was "preventing our democracy at all costs." China interrupted her speech twice.

Ho spoke with The World's Marco Werman about the protest movement and what she said are broken promises from China to Hong Kong.

Marco Werman: These protests started last month. There have been some dramatic scenes from the demonstrations, over a million people in some protest marches, but what has all this accomplished so far?

Denise Ho: The change that I have seen, the most prominent, is among the people. This is a new movement that is very unique in itself because we have no leader. We have no one particular organization that is leading the crowds. It's really very organic and everyone pitches in in this movement. Of course, we've had some down moments during this month but I have seen people becoming even more creative than we were in the beginning. They're changing our ways of protesting, using different tactics and also there is a sense of coexistence between people who have different ways of doing these protests. This is a very big change from what we had during the Umbrella Movement because back then there were a lot of conflicts between the people protesting. Of course, we are not seeing a very big response from the Chinese government or the Hong Kong government right now.

Related: Hong Kong activist Joshua Wong: 'We will continue our battle until the day we have democracy'

Maybe not a big response from Beijing. Even with all these people turning out and these new tactics, you're still in the shadow of Beijing, aren't you?

That is the original state of being in Hong Kong, where we are legally a part of China but we are also legally an autonomous special administration in China. That is something that we have, from day one, been fighting for: our autonomy. Of course, there are a lot of rumors and propaganda saying that the people are requesting for Hong Kong independence but that is just basically not true in the majority because, as I said in my United Nations short speech, we have been asking for a one country two systems to be implemented properly, which has not been the case, 22 years in. We are still seeing a lot of erosion in our whole system.

For one thing, we were promised universal suffrage which means that we could elect our own chief executive in the year 2008. Right now we are in 2019 and we do not see that happening anytime soon. Beijing has put forward some rules where they have said that they would be the ones choosing the candidates for people to elect, which of course means it's not really universal suffrage. Just in this very basic sense of the one country two systems, it is just not working.

Protesters have set a new deadline today for the government to respond to their demands. What are you demanding?

We are, at the moment, still demanding for the extradition bill to be withdrawn. The government has said that the bill is dead but obviously for us it is just a word play because there is no legal term "the bill is dead." You have to either withdraw it or you can delay it but you cannot suspend it. There is no such thing as suspension. This is the prominent thing, and then also we are requesting for those who have been unjustifiably arrested to be released because we have seen a lot of police brutality and police arresting people for no reason on the streets. For myself, I think eventually we have to come back to the question of universal suffrage. It's only when we can really elect our own legislative council and chief executive officer that we can really have control over our own legal and judicial system.

You're an activist, a celebrity and evidently, you're also a cat owner. What difference does it make when a famous singer says these things as opposed to someone like activist Joshua Wong, who only has activist credentials?

For one thing, it raises curiosity I guess.

Does celebrity status give you a level of safety? Are you concerned for your own safety right now?

I have a lot of friends who are concerned for my safety after my speech in the UN, but personally, I do believe what you said just now is right. My celebrity might be somewhat of a protection for me right now.