It’s a rainy night in mid-May, and around 50 young adults are squeezed into a small classroom in the Casa Fusa health clinic in Buenos Aires, Argentina. In breakout groups, they polish their presentations — about safe sex.

Some have Power Point presentations lined up while others offer up demonstrations, games and skits. They show how to use a condom, for both men and women, and talk about things like consent and preventing HPV and HIV.

That may not sound too unusual, but in Argentina, sexual education is a controversial topic. Many schools here don't even broach the subject even though comprehensive sex education has been mandated by law since 2006. The curriculum, known as ESI (Educación Sexual Integral or Comprehensive Sex Ed), is designed to teach children across the country about contraception, consent and how to be more inclusive of LGBTQ rights and sexuality. But critics say many schools and provinces don’t offer it in a consistent way.

Today, the issue is getting plenty of attention because of the push to decriminalize abortion. Abortion rights activists inserted a clause into the abortion bill, which they reintroduced to Argentine Congress in May that says ESI must be taught in schools, reinforcing the existing law. Amid the abortion debate, both sides have agreed that the best way to prevent abortion is by providing sex education. 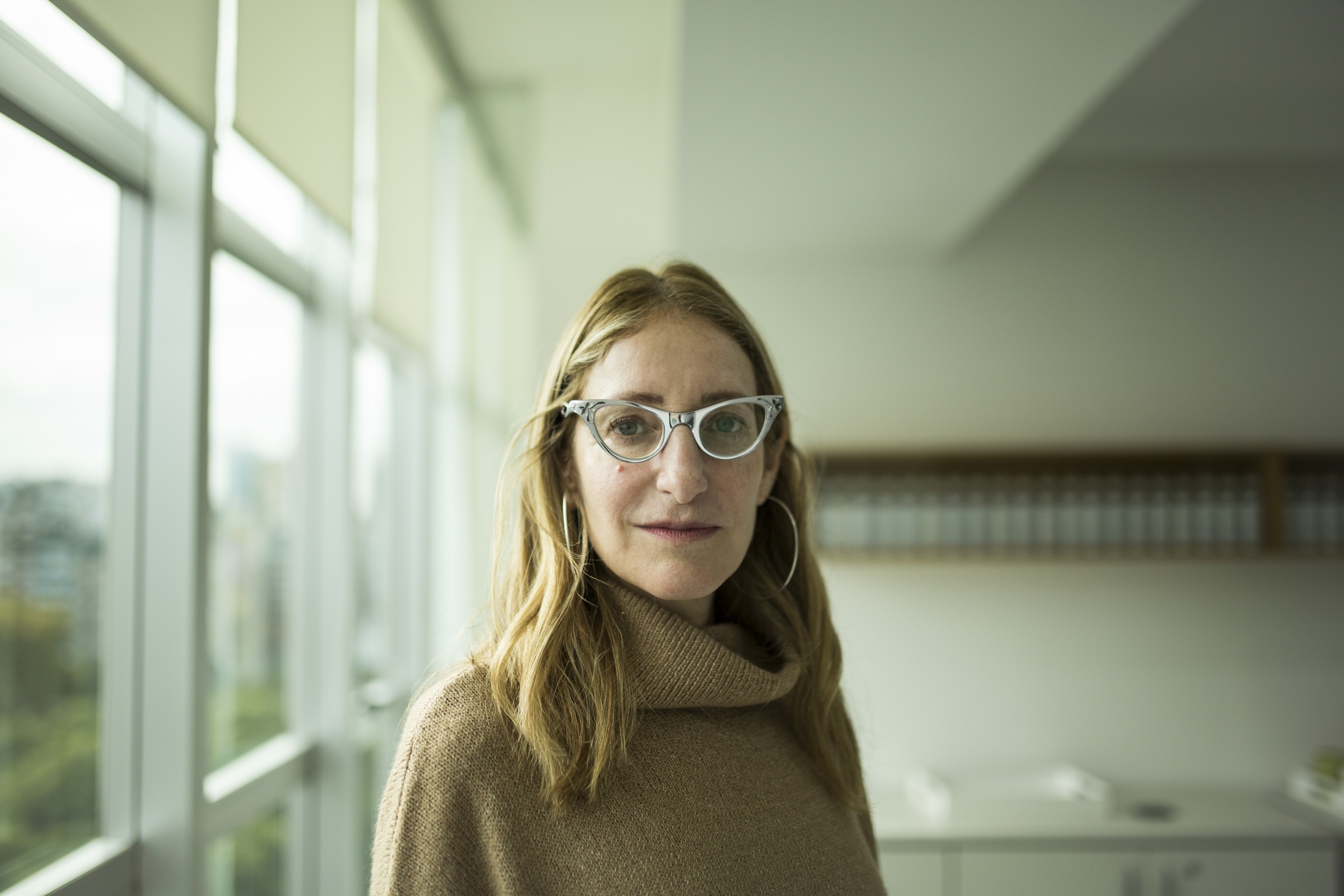 Mariela Belski is the executive director of Amnesty International in Argentina. Amnesty is one of the groups being consulted by the government on enforcing the sexual education curriculum in schools nationwide. Belski said that during the abortion debate, people on both sides agreed that teaching sex education is the best way to prevent abortions.

Mariela Belski, executive director of Amnesty International in Argentina, remembers how interesting it was to see both sides come together and agree on fully implementing the sexual education curriculum in schools nationwide. But after an earlier version of the abortion bill was defeated last year, and abortion remained criminalized, with the exception of a few cases, this alliance fell apart.

“They changed on this,” Belski said, referring to anti-abortion activists. “And they said, ‘We don't need to have this law in the schools.’ [They claimed that it] provokes children to have more sex, and [that] this brings in gender ideology.”

Amnesty International is a consultant for the government in helping to enforce the law. They want to make sure it’s carried out all over the country — not just Buenos Aires. Places like Tucumán and San Salvador de Jujuy. Both cities were in the news earlier this year for separate, but similar cases: two girls, ages 11 and 12, respectively, each got pregnant after they were raped by a family member. 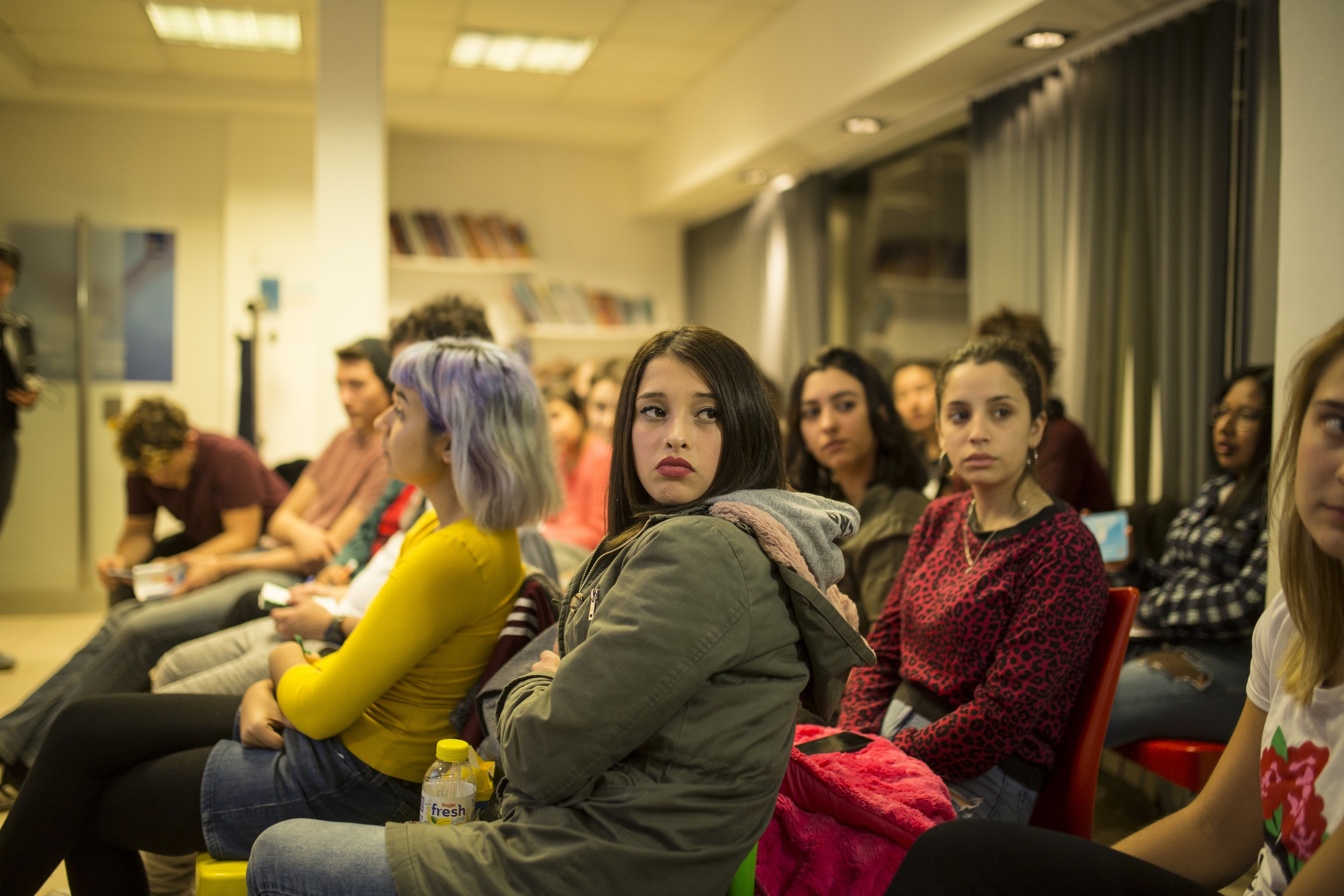 Students at Casa Fusa, a health clinic in Buenos Aires, Argentina, put in their own time to be here after the regular school day. They're trying to be proactive about their own sexual education.

Belski says that in addition to finding ways to enforce the law around sexual education, they are focused on collecting data, too — like, about how many girls get pregnant along with their ages and socio-economic status. That will help Amnesty International and others monitor the problem and make their case for comprehensive sexual education.

“The main goal of the program is to try to avoid adolescent pregnancies,” Belski said.

The students at Casa Fusa are motivated to learn on their own time. In fact, many come here after the school day is over and still have homework to do when they get home. Most arrive from neighborhoods close to the clinic and usually find out about it through word-of-mouth. The free, two-hour class happens on Monday evenings for five weeks. It goes for two hours each time. 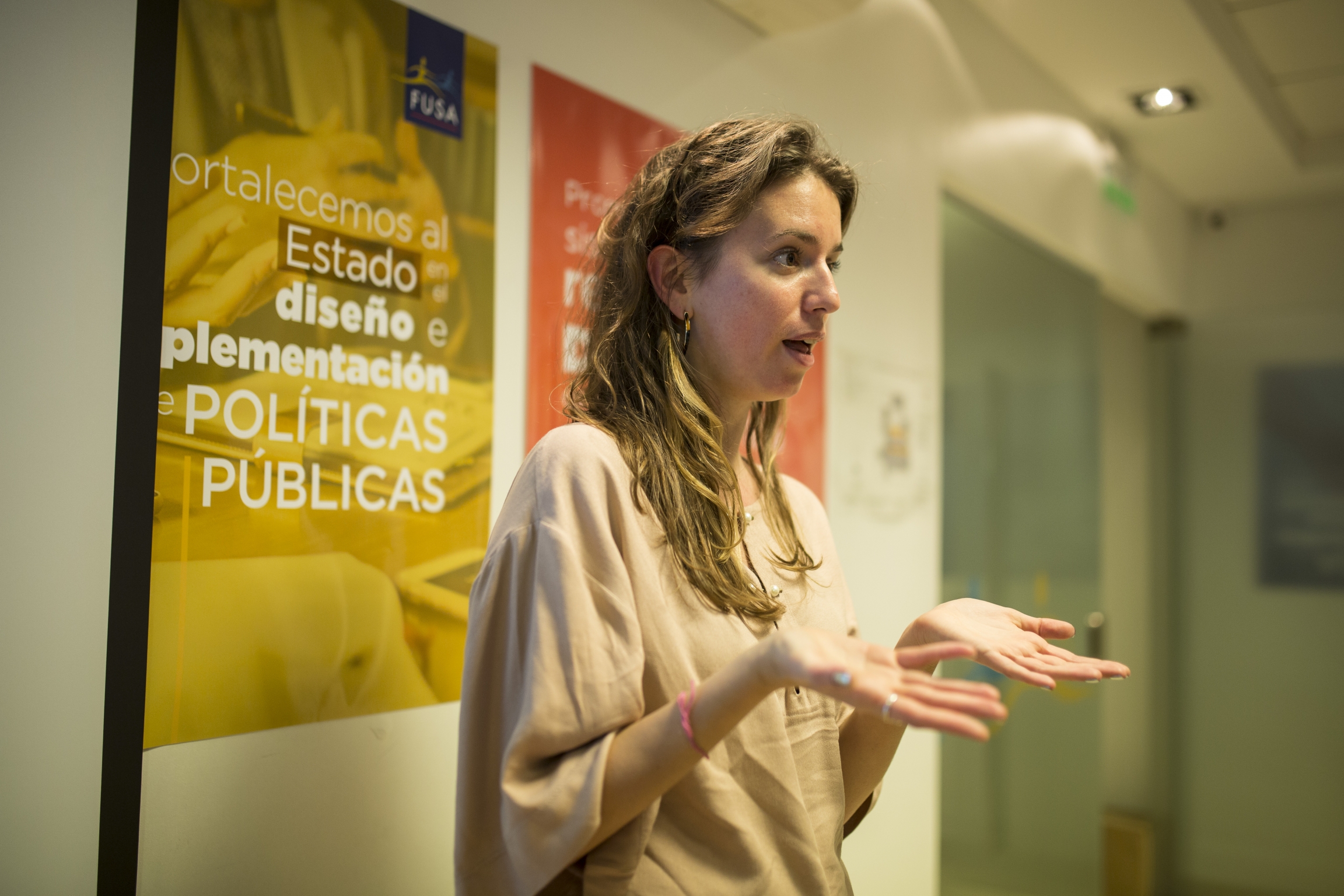 Daniela Giacomazzo is one of the coordinators at Casa Fusa. She leads a class on sex education for young people ages 15-24. She says there is a lot of fear about the sex education curriculum in Argentina. Religious groups, she says, are falsely claiming that the curriculum promotes homosexuality.

“Knowledge is power,” Casa Fusa instructor Daniela Giacomazzo said to the roomful of students. Yes, she says, the class is about teaching people about their bodies, but it’s also about feeling empowered to ask questions of adults.

“The fact that many young people are searching for a class like this shows how desperate the situation is regarding sex education in Argentina.”

It’s meeting a crucial need, Giacomazzo told The World: “The fact that many young people are searching for a class like this shows how desperate the situation is regarding sex education in Argentina.”

And here at Casa Fusa, this isn't your typical sex ed class. During the five-week course, students also learn about gender violence, abortion and sexual diversity and inclusion. Afterward, many of them will go on to do peer-to-peer teaching about sex education.

Like Laura Moses, 19, who arrived at Casa Fusa because, she says, sex education at school was sorely lacking. She works at a political organization and wants to lead similar classes in her community, but she realized she just had a basic knowledge. She came across the Casa Fusa class on the internet. 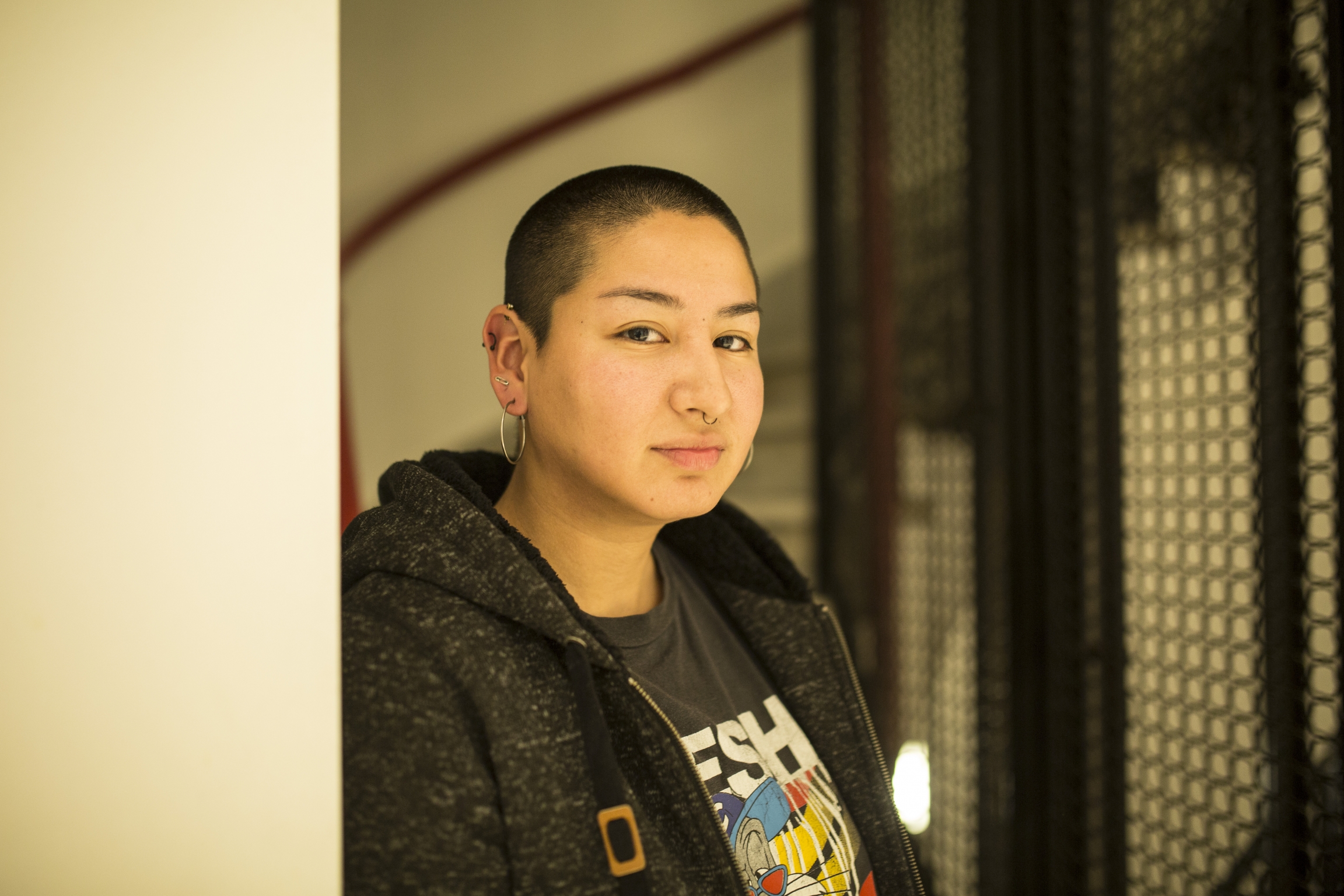 Laura Moses wanted to take the class at Casa Fusa because she belongs to a political organization that wants to be able to teach about sexual education in the community. She said what she learned in school was totally inadequate and “crappy.”

Back in school, “We had a class of one hour, and they taught us about feminine hygiene and how to use a condom,” she complained. “They also separated the boys from the girls.”

The more she’s learned at Casa Fusa, the more she feels shortchanged by the school system.

“I thought the class at my school, that was it. And, it had a totally heterosexual focus. When I grew up, I thought, ‘Oh what a crappy class.’”

“I thought the class at my school, that was it. And, it had a totally heterosexual focus. When I grew up, I thought, ‘Oh what a crappy class,’” Moses said.

For her, the small class size at Casa Fusa, plus the fact it's co-ed, means she can have more exchange and conversation about experiences.

Moses feels fortunate that she can take this class, but knows that many young women and girls like her who live outside of Buenos Aires don’t have the opportunity. Those areas are poorer, she says, and very conservative. She explains that there is a lot of sexual abuse in Argentina — especially among young girls. She says this class is important for them to have the tools to advocate for themselves.

At Casa Fusa, students talk openly and ask questions about how you contract HPV, which can lead to cervical cancer, and HIV and AIDS, as well as knowing your rights at the doctor’s office.

Arianna Ruggero agrees. She went to a private, religious school where she was taught that sex was bad. And, of course, she says, there was nothing about homosexuality or respecting people who identify as LGBTQ or gender nonbinary.

“They only taught us about contraception and nothing about pleasure. I’m gay, and there was nothing about your own pleasure and I felt very alone,” said Ruggero, who is studying communications at a local university. 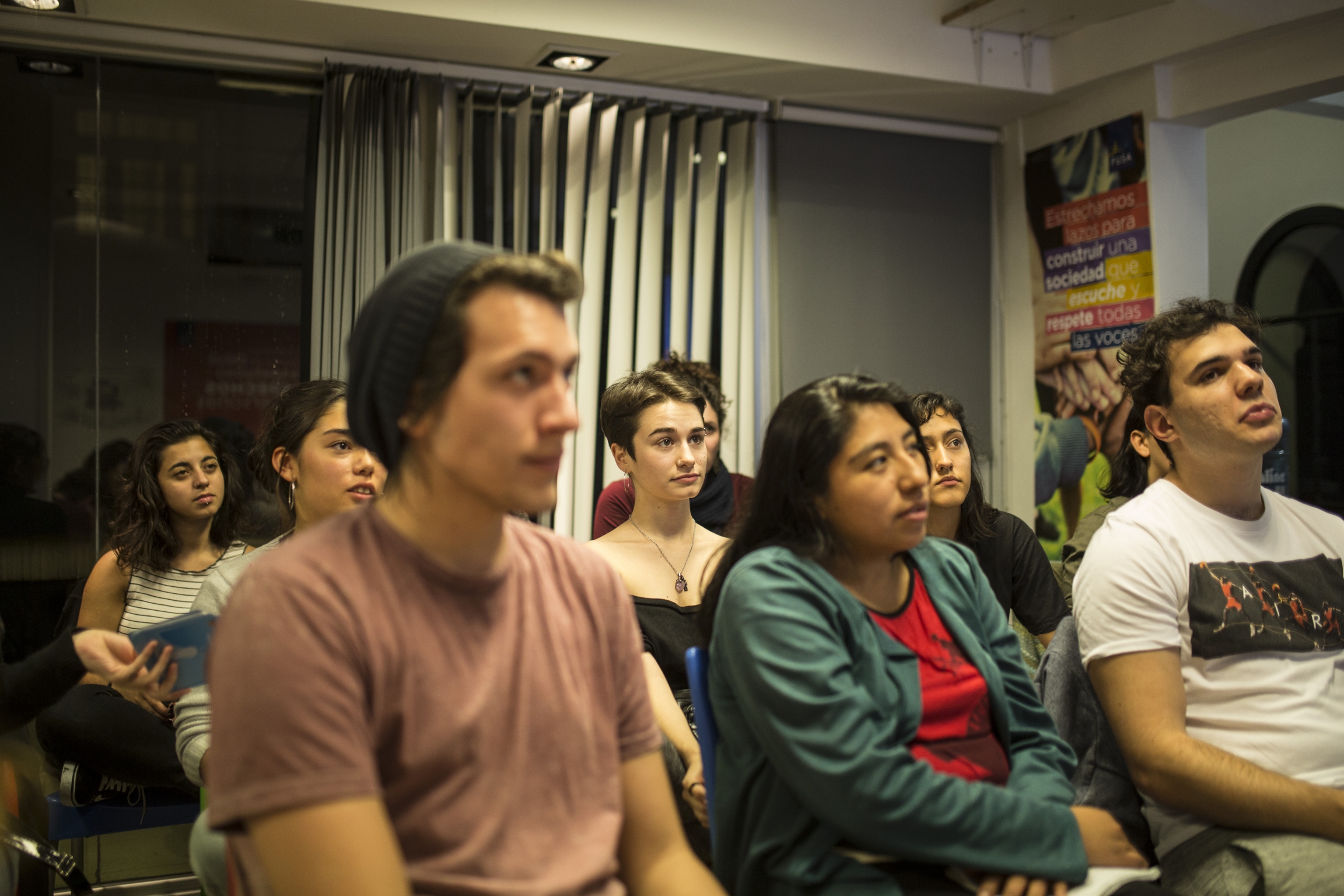 Arianna Ruggero is studying communications at a university in Buenos Aires, Argentina. She’s taking a five-week course on sex education at Casa Fusa because she wants to have more open dialogue about sexuality and LGBTQ rights.

That ESI includes LGBTQ sexuality is a big issue for religious and conservative groups, and they have been outspoken against it.

Late last year, the hashtag #conmishijosnotemetas, which translates to “don’t mess with my kids,” started circulating among parents and conservative activists in Argentina.

A recent Facebook post from the group with the same name, Con Mis Hijos No Te Metas, featured a video advertising a planned demonstration in front of the Ministry of Education. Parents looked into the camera saying things like: “The schools will teach our children about so-called sexual and reproductive rights, encouraging them to have sex at a young age without taking into account our opinion, their parents and grandparents.”

“There is also a regional attack on comprehensive sex education, with campaigns like Con Mis Hijos No Te Metas, which is related to an advancing conservatism in the region,” Giacomazzo said. “It creates a lot of fear in families ... because they [the attacks] disseminate a lot of fake news, also fake news about the content of the comprehensive sex education curriculum, and also by educational institutions, which are afraid to teach it even though it's the law.”

The organization Defensores de Mamás or Defenders of Moms, says yes, sex education is needed. They acknowledge that women they talk with need information to prevent unwanted pregnancies. But, they don’t necessarily think this law is doing it.

Casa Fusa's Giacomazzo says that not teaching sex education can be harmful. It's also important that it's geared for all ages, Giacomazzo adds.

The data, she says, backs that up: A 2016 Ministry of Health report says that “many pregnancies that occur in teenagers under 15, and in particular under 13, are a product of sexual violence.”

“As you know, we have a lot of sexual abuse among minors. So, this curriculum makes them aware of what is a good touch and what is a bad touch from an adult,” she said. 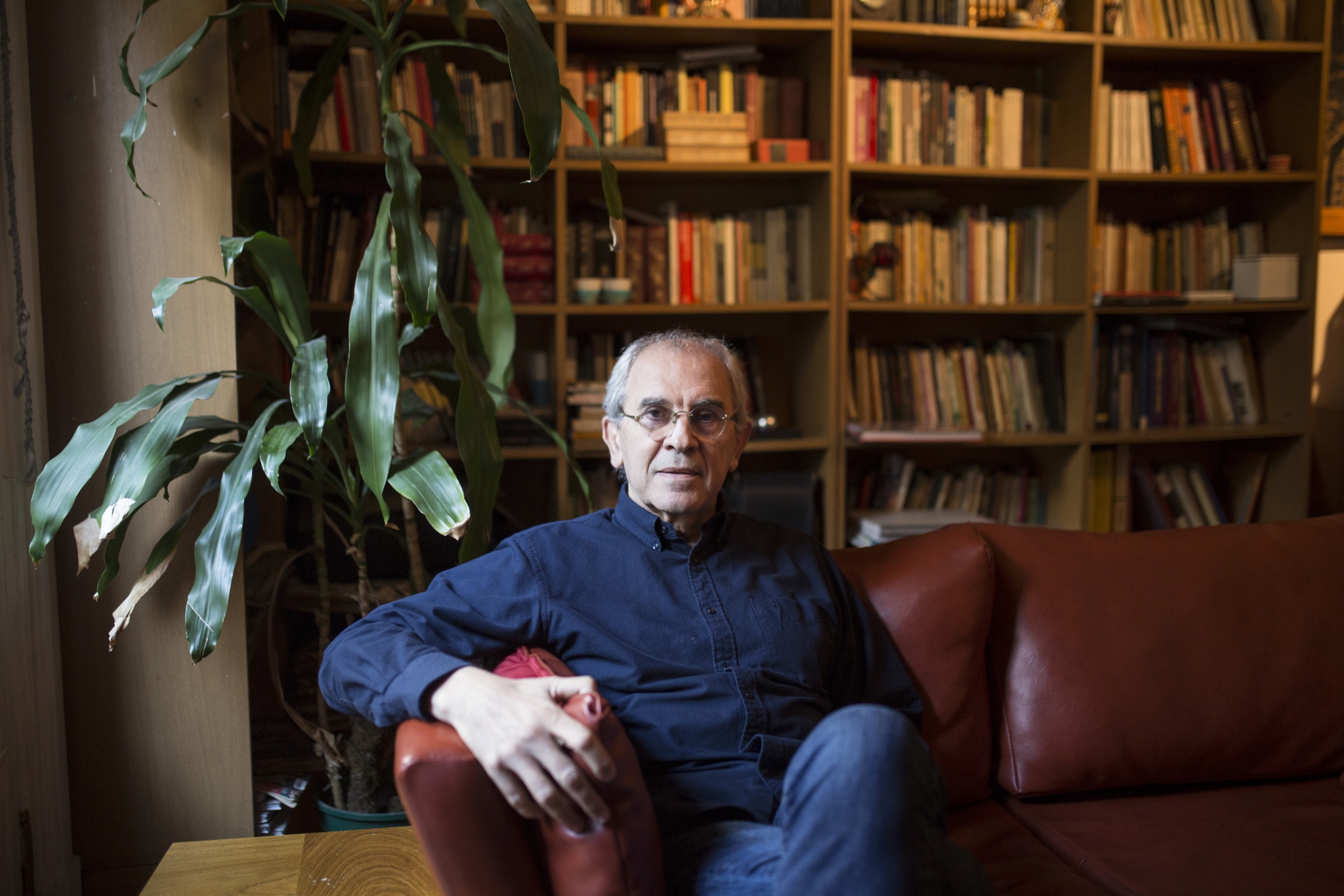 Enrique Stola has been a psychologist for 40 years. He believes that sexual abuse of minors could be deterred if sex education were widely embraced by Argentina’s school system.

Psychologist Enrique Stola agrees. He’s been practicing for almost 40 years as a family and adolescent psychologist and has seen dozens of abuse cases during his practice. He says the one way to combat this problem is through education.

“The way is the ESI. Of course, there is a lot of resistance and reluctance from the Catholic Church and the pope. They say it destroys the paradigm of the family.”

He cited the recent cases of the two young girls in San Salvador de Jujuy and Tucumán as prime examples of why the ESI is needed.

“Whenever kids have those words, they know who to ask for help. … But if no one tells them what their body is, what their rights are, how adults should behave with their bodies, then they are totally defenseless against any sexual abuser.”