Luciana Angueira, a social worker in Villa Fiorito, a poor neighborhood outside of central Buenos Aires, Argentina, says many of the women she sees are looking to end their pregnancies, but don't want their husbands to know.

“That would mean they are being unfaithful — the men are very possessive,” she said. “We have some patients who don’t believe in abortion, but they still come here looking for pills because they don’t want more children.”

In Villa Fiorito, families struggle to meet basic needs — many don’t have proper drinking water — and they've run out of room in their houses, says Angueira, who has worked in the clinic here for more than a decade.

The Center of Primary Social Health is located in the heart of Villa Fiorito. Many people survive as cartoneros, sorting through trash and selling whatever they’re able to recycle.

On a cold, windy, May morning, Angueira explains how there is a big effort to clean up the neighborhood. She points to a park and small field where kids play soccer — the famous player, Diego Maradona, came from here.

“This neighborhood is not middle class, and things are very different here. Usually, by the age of 11, girls have boyfriends. By the age of 35, you have several kids and you are expected to be a poor housewife.”

“This neighborhood is not middle class, and things are very different here. Usually, by the age of 11, girls have boyfriends. By the age of 35, you have several kids and you are expected to be a poor housewife.”

It’s women like her patients, Angueira says, who are often left out of the abortion debate that’s playing out across Argentina. It’s a fight that’s far from over.

Abortion has been illegal here since the 1880s. It’s only permitted in cases of rape and incest and when a woman’s life is in danger. That has led many women to seek out abortions under the table: The health minister estimates that there are more than 350,000 clandestine abortions a year in the predominantly Catholic country. And the number may be much higher.

But a growing movement in the country to combat violence against women has helped bring abortion to the fore.

Angueira thinks that the whole health system in Argentina is misogynistic. Women, she explains in Spanish, are the only ones expected to get birth control and then take care of the kids’ health needs. Every month, she tends to women who need the birth control implant, Mesigynia, which is injected. They get it so their partners won’t know they’re using birth control.

There are no “feminist” or “deconstructed men” here, Angueira says.

Related: Legal abortions remain elusive in Argentina, especially for the most vulnerable

Victoria Tesoriero is the head of a national campaign to make abortion legal in Argentina.

She just got back to Buenos Aires from the Cannes Film Festival in Cannes, France, where she went to a screening of the documentary, “Que Sea Ley (Let it be Law),” about the fight to legalize abortion in Argentina. She was joined by a dozen other activists who turned out to support the filmmaker, Juan Solanas. Afterward, they walked the red carpet waving their movement's signature green scarves and chanting “solidarity for women.”

She says the international attention they received in Cannes makes a difference at home. Tesoriero is part of an organization called Católicos por el Derecho a Decidir, or Catholics for the Right to Decide. In her view, Catholicism and abortion aren’t at odds.

Tesoriero says the canonical code allows for Catholics to be in favor of abortion.

“I think that has nothing to do [with] the faith that you might have with something that is a right, and it has to do with health care. First of all, there are many documents in the church that allowed our position of supporting [to] be Catholic and support legal abortion,” Tesoriero said.

It’s politicians who use the Catholic Church to support their anti-abortion cause, she says.

But Catholicism’s influence on everyday Argentines isn’t as strong as it once was, she adds.

She says events like the Cannes screening put pressure on politicians and sends the message that women all over the world are paying attention to the issue in Argentina and beyond.

“To position the issue of abortion internationally, it [puts] more pressure [on] the Argentinian government,” she said. 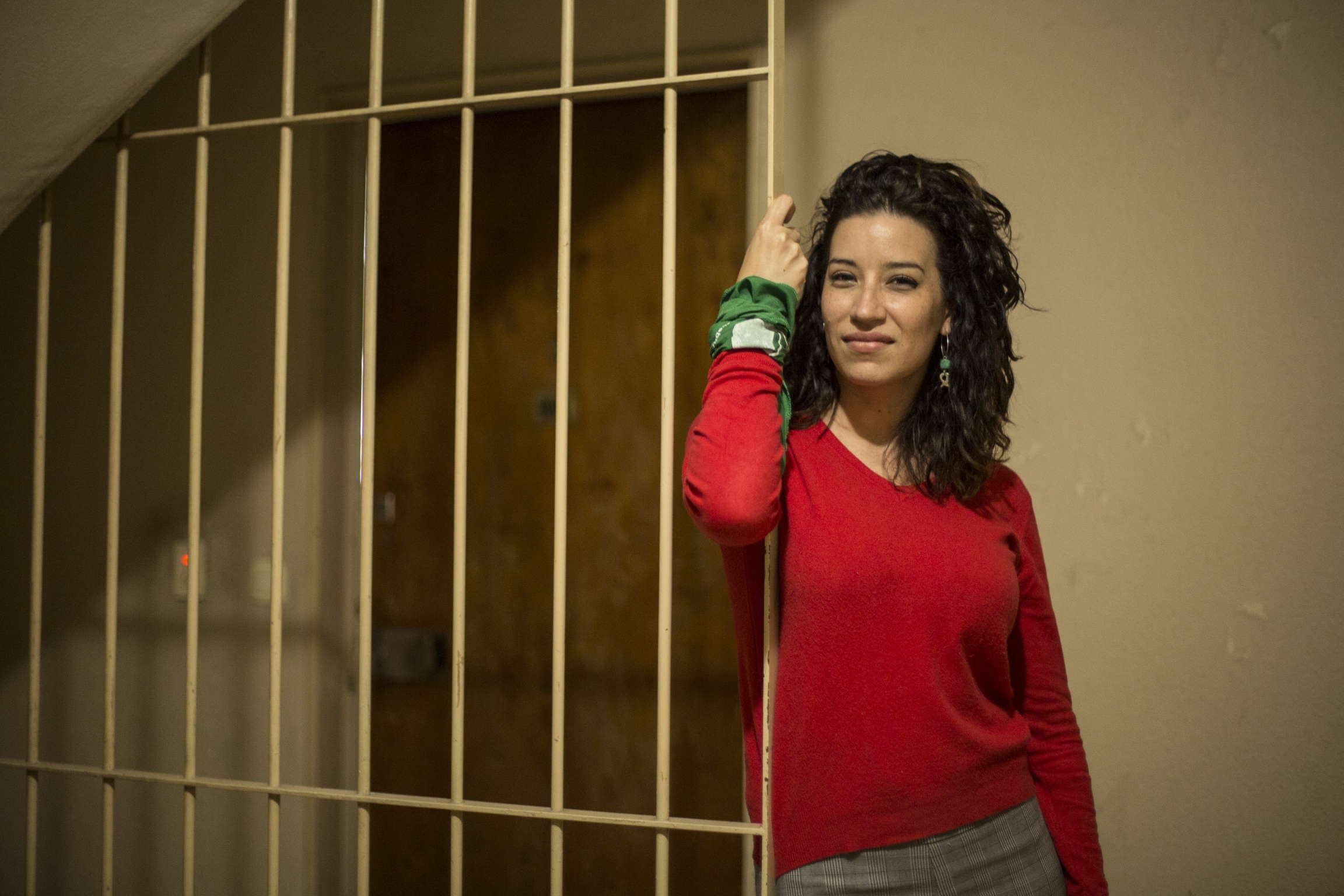 Victoria Tesoriero is the head of the national campaign to legalize abortion in Argentina. She also belongs to a group called Católicos por el Derecho a Decidir, or Catholics for the Right to Decide.

After the legislation to decriminalize abortion failed last year, Tesoriero and others kept organizing. On International Day of Action for Women’s Health on May 28, advocates like Tesoriero helped reintroduce another abortion bill in Congress.

“The bill says that every woman has the right; every woman or a person with a capacity of gestation has the right to decide to interrupt pregnancy up to 14 weeks of pregnancy. And the state has to ensure that decision. The public health system has to respect that.”

She says the bill is simple: “The bill says that every woman has the right; every woman or a person with a capacity of gestation has the right to decide to interrupt pregnancy up to 14 weeks of pregnancy. And the state has to ensure that decision. The public health system has to respect that.”

The legislation passed in the lower House, but fell short in the Senate.

Even though a similar bill failed in the Argentine Senate last summer, it energized a movement to decriminalize abortion. It also mobilized the other side to keep the restrictions firmly in place.

Argentinians go to the polls this fall to elect representatives to Congress. Carla Pitiot has been in office since 2015 and uses her voice in Congress to champion causes that affect women. 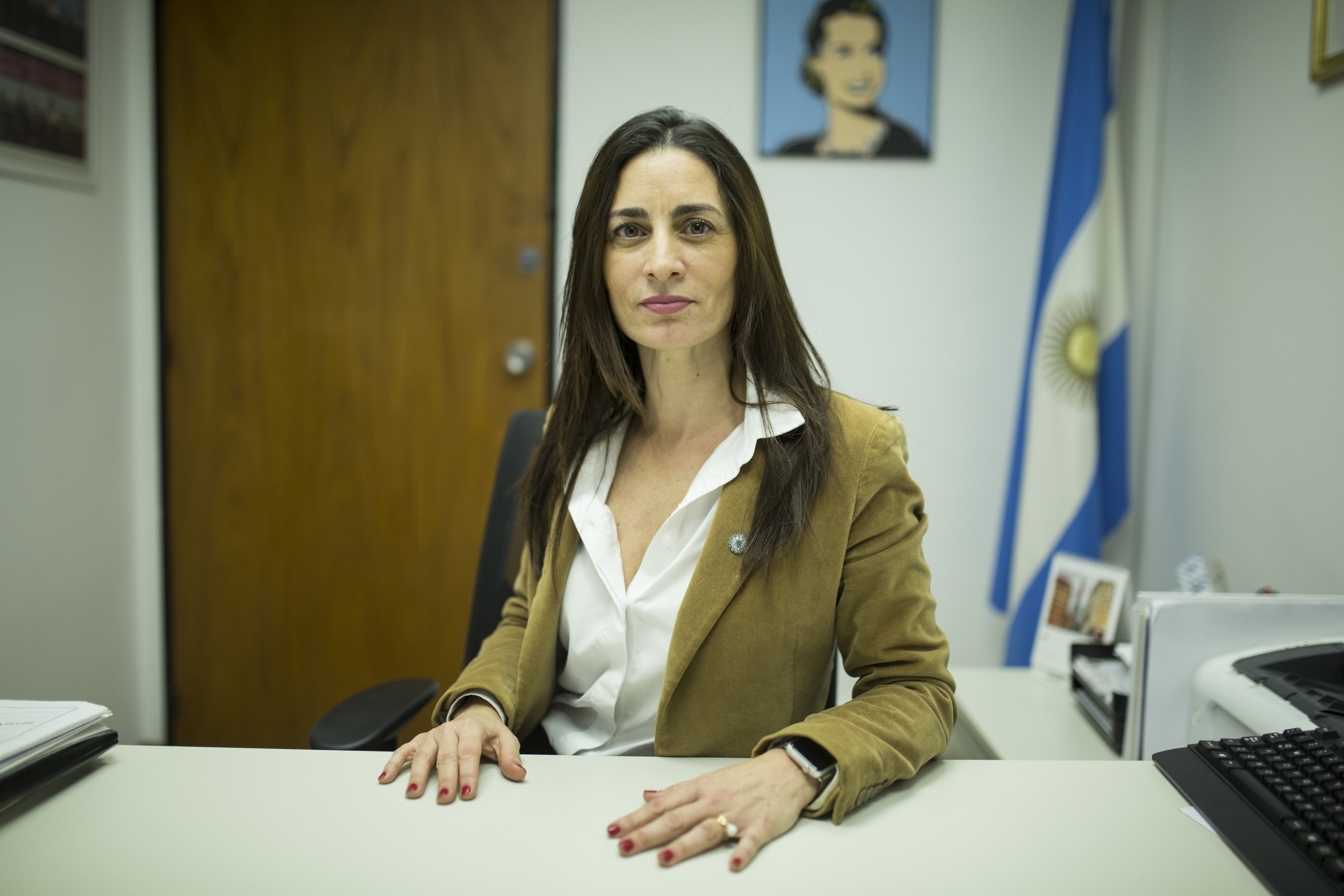 Carla Pitiot has been in office in Argentina since 2015. She helped set up a hotline for victims of domestic violence and rallied around "femininist causes," but she's against abortion.

On the walls of her office are portraits of Frida Kahlo, a portrait of her hero, Eva Perón, and posters advertising a hotline for victims of domestic violence. She worked to set up the hotline, or consejería, and she’s pushing Congress to give men stiffer penalties when they assault women. But, despite taking up these “feminist causes,” she says, she’s against abortion.

“We’ve already decriminalized abortion in the most serious cases. Like when a woman is raped. Some countries don’t even have that.”

“We’ve already decriminalized abortion in the most serious cases. Like when a woman is raped. Some countries don’t even have that,” said Pitiot.

During an abortion debate last year, Pitiot tweeted, “Legalizing abortion is a break in our rule of law. We have a constitutional duty to save two lives.”

She thinks a healthy debate is good.

“I am in favor of the debate. I thought it was very mature, and I’m convinced that if we were to take a vote today, it would be the same.”

Earlier this spring, on International Day of the Unborn Child, anti-abortion activists held a rally of their own.

Thousands of people marched against abortion and waving their blue scarves with the slogan of the anti-abortion campaign printed on it: “Las dos vidas,” or “Both lives,” referring to the mother and her unborn child. 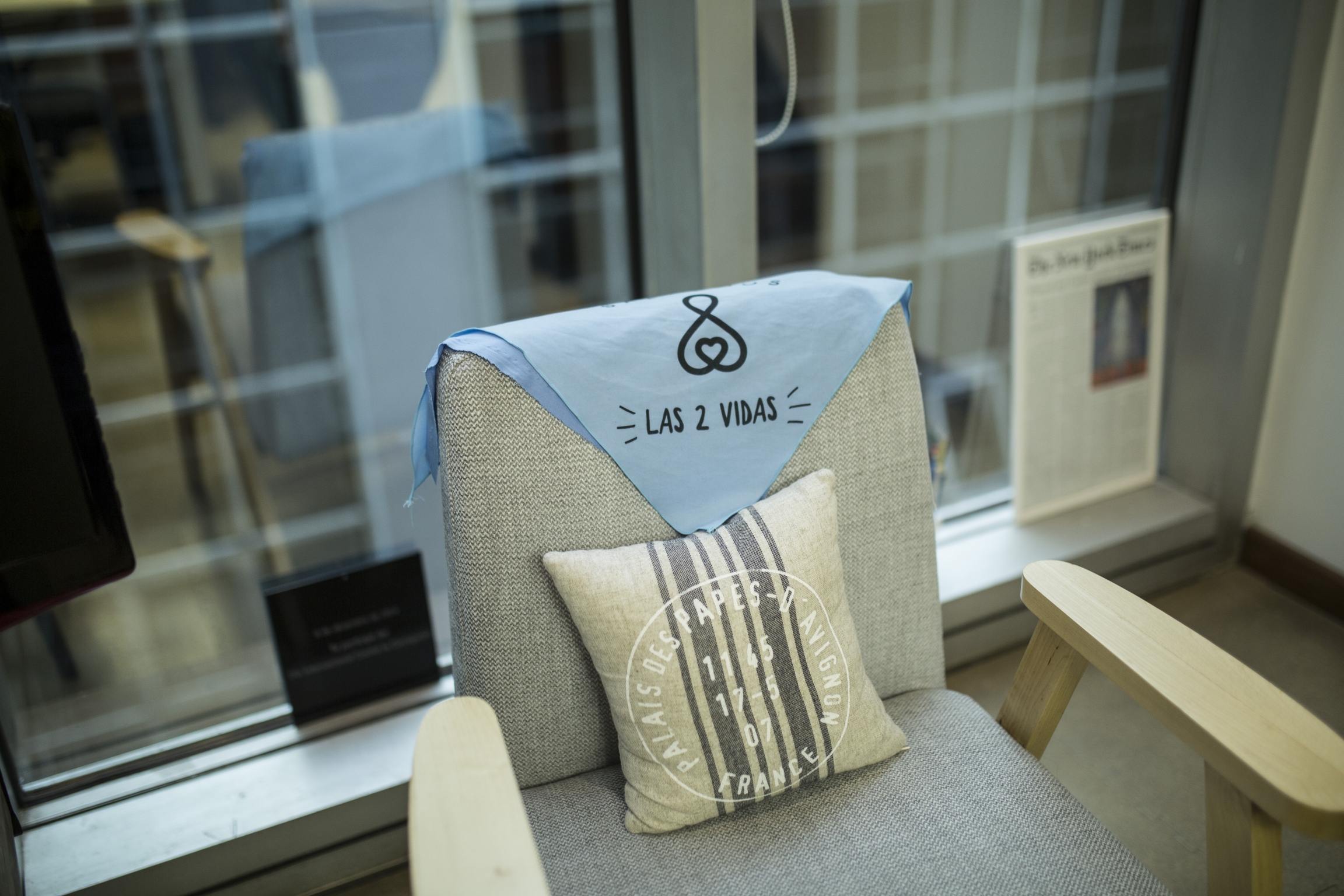 A blue scarf that is the symbol of the Save Both Lives campaign sits on the back of a chair in Carla Pitiot's office.

Guadalupe Batallán was one of those marchers. She started volunteering with the anti-abortion campaign right after the debates in Congress in 2018.

“We’re really amazed to see our message here in Argentina spreading to other countries, including the US, where I’ve even seen photos of blue scarves like ours at a march. That means there are people there who think like us, regardless of what the laws say there,” she said.

Batallán says she thinks abortion should be outlawed in all instances, including rape. And she cites a case that made headlines earlier this year of an 11-year-old rape victim who was initially blocked from getting an abortion.

“I personally am not in favor of abortion in the case of rape. Because even if someone has been the victim of a crime, that doesn’t give her the right to commit another crime, by taking another life. Plus, in terms of mental health, the trauma of undergoing an abortion simply makes the original trauma of the assault worse.”

“I personally am not in favor of abortion in the case of rape. Because even if someone has been the victim of a crime, that doesn’t give her the right to commit another crime, by taking another life. Plus, in terms of mental health, the trauma of undergoing an abortion simply makes the original trauma of the assault worse.”

Batallán has some personal experience recovering from the trauma of rape. Her mother was a rape victim. And although the attack didn’t result in a pregnancy, it was still traumatic.

Batallán says her group has set up centers for pregnant women in poor areas outside of the capital where they offer free food and classes. She says they want to provide alternatives for women who think they don’t have any options. 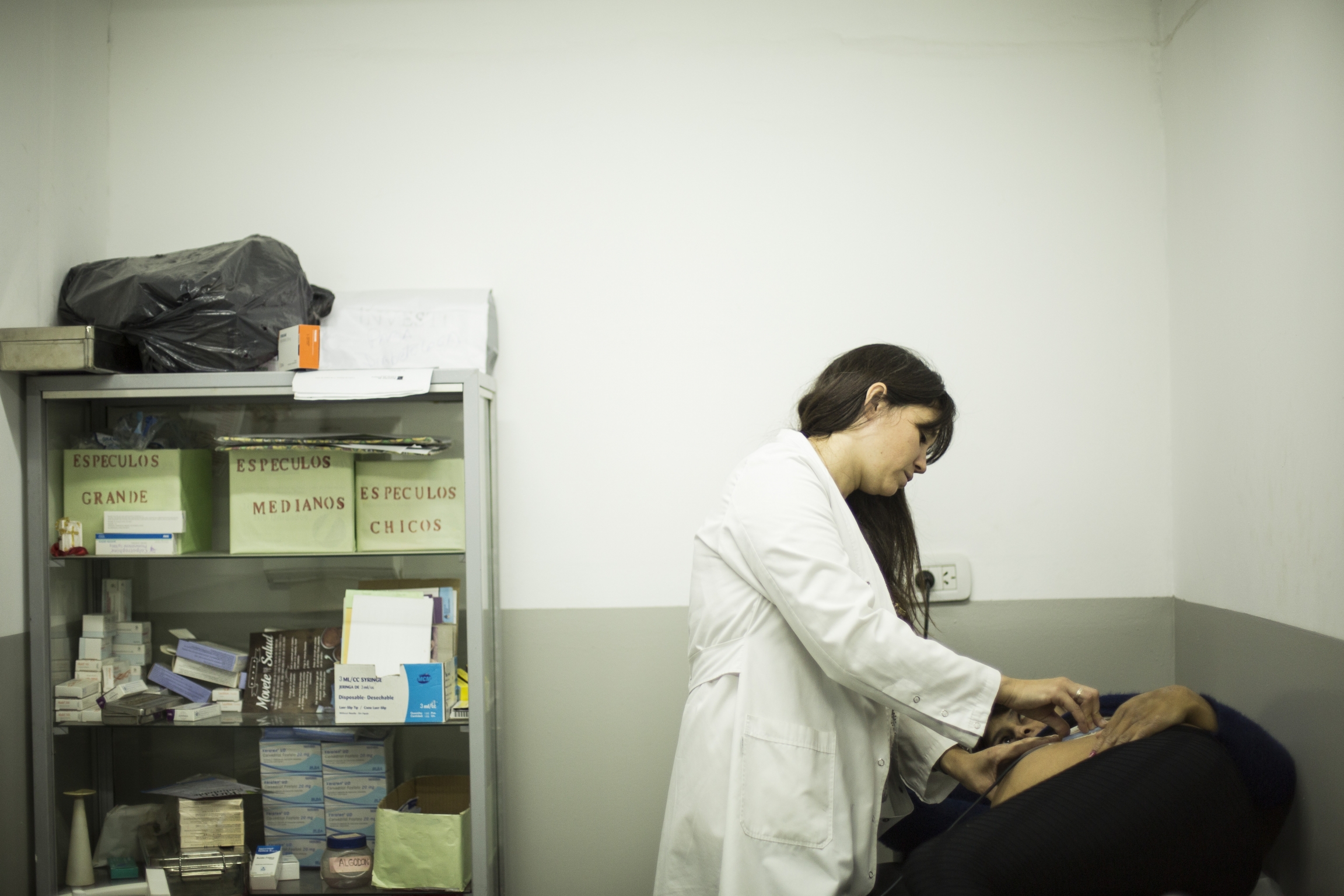 Mariela, a gynecologist at the health clinic in Villa Fiorito attends to Támara, a young pregnant patient. At the time of this photo, Támara was due any day.

But Tesoriero says the rights she’s pushing for would protect all women. Her campaign is also working on the ground to spread the message that abortion is a health care issue and should be available to anyone.

She says it seems especially important at a time when a country like the United States might be rolling back legal protections for abortion.

“Maybe women in the US thought they would always have access to abortion, so they’ve taken it for granted. But here in Argentina, we are always on the lookout for things that can set us backward,” Tesoriero said.

Women in Argentina have to pull together, she says. They can’t afford to look back.