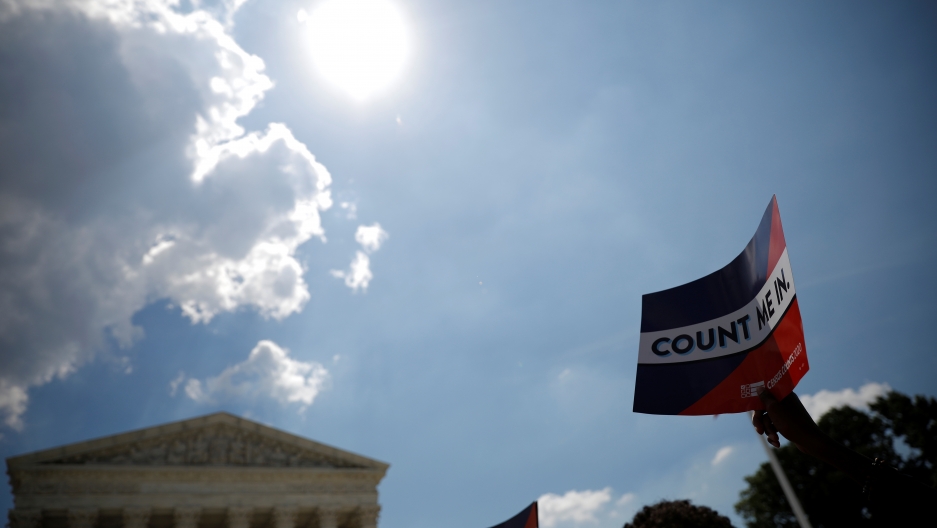 A protester holds a sign outside the US Supreme Court where the court ruled that US President Donald Trump's administration did not give an adequate explanation for its plan to add a citizenship question to the 2020 census, delivering a victory to New York state and others challenging the proposal in Washington, June 27, 2019.

A citizenship question is off the 2020 US census form — for now.

The US Supreme Court sent back to the lower courts a case looking at whether the federal government has the right to ask a person's citizenship status on the census.

The 5 to 4 ruling said that the federal government needs to provide clearer justification for asking the question. In its opinion, the court found that federal officials’ reasoning was “incongruent with what the record reveals about the agency’s priorities and decision-making process” and that there was a “disconnect between the decision made and the explanation given.”

The ruling is a setback for the Trump administration, which wanted to include a citizenship status question in the 2020 census. Those who oppose the question have argued that the federal government had political motives for adding the question.

Commerce Director Wilbur Ross had argued that the question was included as part of an effort to improve enforcement of the Voting Rights Act. The court's opinion stated that the reasoning seemed "contrived."

More recently, challengers pointed to new evidence from the files of deceased GOP consultant, Thomas Hofeller, who had pushed for the question. They discovered documents that indicate that he told census officials that adding the question would be beneficial for Republicans and non-Hispanic whites.

The ruling makes it harder for the federal government to settle all the legal questions around the citizenship question and still have enough time to print out the forms.  But federal officials could work quickly to clarify its reasoning to the lower courts.

Opponents say adding the citizenship question would negatively impact communities with higher proportions of immigrants. They say people would refuse to answer the census, which would result in a massive undercount — affecting how many congressional seats and electoral votes states get. It would also mean losing out on federal dollars for infrastructure, education and health care.

Related: This algorithm could keep your census data 'future-proof'

Julie Dowling, a sociology professor at the Department of Latino Studies at the University of Illinois Urbana-Champaign, talked with The World’s Marco Werman about why damage may have been done already, even if the citizenship question is not a part of the 2020 census.

Marco Werman: What do you think was at stake with this ruling?

Julie Dowling: There's a lot at stake here. I mean, the citizenship question could have detrimental effects for our counts. We already have undercounts of Latinos, Asian Americans, various racial and linguistic minorities in this country and to put a question on there that would deter responses for those populations would have had really disastrous impacts, particularly for states with higher immigrant populations, so California, New York, … Illinois. Those states could have lost congressional representation and a lot of federal funding as well.

What is your take on this decision and what it actually means?

I was hoping to see a more clear shooting down of the citizenship question in its entirety. What we did get, though, was a remand to a lower court. The lower courts have been basically striking down the question. And so I think that this is a promising move, especially since they are on an imminent deadline right now to get those forms printed for census 2020. With it still being caught up in legal battles, this will then hopefully mean that we will not have it on the census 2020. I think that some people are already saying it's not going to be there. I'm a little bit cautious because they left a little window there where it still could be argued for.

A big concern with the citizenship question is about whether people would participate and answer it and how that would impact the actual count. If we don’t see the question in 2020, does it solve that problem?

It will definitely be better, not having it on the form. But I think at the same time we've seen all of this coverage for the last year. Last year, when we had a dress rehearsal for the census, they did this in Providence, Rhode Island, last summer, and the citizenship question was not on there. And yet, because it was already in the media that the administration wanted to add it, they saw some decreases in participation. They saw people saying they didn't want to fill it out because of the citizenship question.

In terms of how people are perceiving the census now … there's still going to be that fear that's out there and so I think that damage has been done.

We want an accurate count. Is there a way to ask the citizenship question that doesn't cause fear in the immigrant population?

On the census, you really just want a head count with very basic demographic information and a citizen question just doesn't need to be there on that count. There really isn't a need for it. We have other data that's available to generate those kinds of numbers without jeopardizing participation in a form that is so critical for people to get both voting representation and federal funding for their communities.

Citizenship has come up on the census before. What is the history on that and the lessons learned?

There were also all kinds of questions that were on there, they used to have: free or slave. They used to have [questions] on different gradations of blackness. All kinds of things were on there that decreased participation or that were problematic in different ways. We haven't seen a citizenship question on there …  for I guess about 70 years now. But with the climate that we have right now around immigration, we're at a very heightened anti-immigrant sentiment. And so this is a very different political climate that we're in right now, a particular climate that I think having a citizenship question on this on the census form would be a real problem.

You're on the US Census Bureau's Advisory Council. Citizenship questions aside, how else is a census missing people? How does race and origin questions play into this?

We traditionally have challenges with counting lower-income, minority populations because of things like housing instability, people living in group residences, basically you might have multiple families living together, people not being able to access the form because of linguistic barriers, et cetera. So you have a lot of challenges that are already there to count minorities, including linguistic and racial minorities. Then the possible citizenship question has led to a heightened degree of fear in those communities. [Even without the question,] you're still going to have the usual barriers of trying to get people to participate who are disengaged from society, who are distrustful of the government in general.