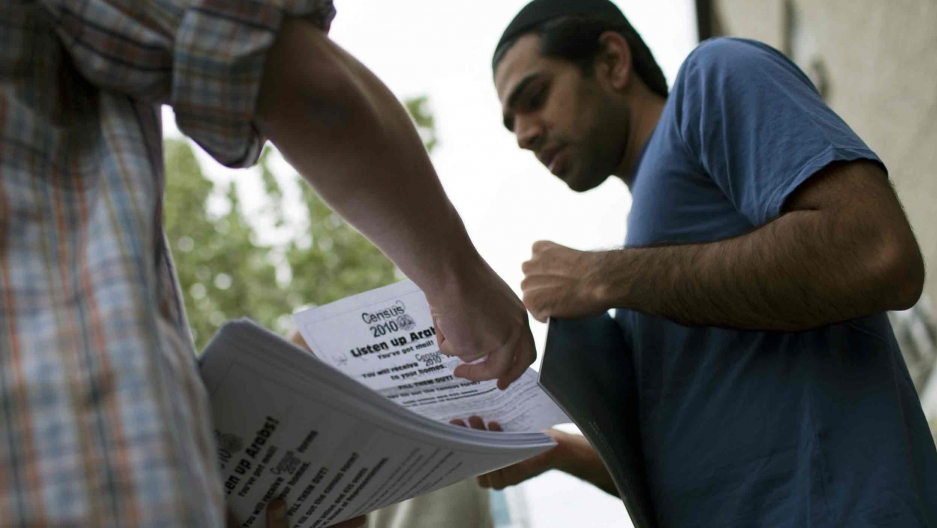 Arab American men exiting a mosque following Friday prayers take fliers encouraging the Arab population to fill out their 2010 census forms in Bay Ridge, New York. Some heavily immigrant neighborhoods are considered "hard to count" and a question added to the 2020 census asking about citizenship could cause many more immigrants to not participate in the census.

Census experts, social scientists and immigrant advocates have warned for years that adding a question on citizenship to the 2020 survey would scare immigrants — no matter their legal status — from participating. And this week, a New York federal judge issued a decision that blocks the Trump administration from asking it.

The question would have required respondents to answer whether they and everyone in their household is a US citizen. The Justice Department has filed a notice to appeal. There’s a small chance it could still end up on the census if the Trump administration can convince the Supreme Court to step in on its behalf. That would all need to happen by the June deadline for finalizing questions so the questionnaires can go to print.

But the damage may already be done: Whether or not the question is included, immigrant communities may already feel they cannot give their personal data to an administration that often vilifies them. They’ve been told to be cautious if anyone asks for their papers or comes to their doors. When people don’t answer the census by mail, census workers follow up in person — and in the current political climate, that can be scary.

“Even before this administration began, immigrant communities have been telling each other, ‘If you don’t know who is at the door, don’t answer the door.’”

“Even before this administration began, immigrant communities have been telling each other, ‘If you don’t know who is at the door, don’t answer the door,’” said Rosalind Gold, senior director of policy research and advocacy for the National Association of Latino Elected and Appointed Officials (NALEO) Educational Fund, a nonpartisan group. “And for us to now tell them to open the door — for us to be able to say that — we need to have stronger reassurances from this administration they’ll keep data confidential, in light of everything else.”

Related: US to add citizenship question in 2020 Census

“Everything else” refers to specific immigration policies as well as the Trump administration’s general rhetoric around foreign-born residents. Unlike past presidents, Donald Trump has made all undocumented immigrants — not just those with criminal histories — priorities for deportation. Rising numbers of undocumented people have shown up to regular check-ins with Immigration and Customs Enforcement only to be detained without warning and deported. There’s been a dramatic increase in workplace arrests. This administration is making it harder for people to obtain legal residency by proposing changes to who counts as a “public charge.” And it’s prosecuting small, but growing numbers of naturalized citizens for immigration fraud and stripping them of citizenship.

That makes immigrants afraid to voluntarily share their personal data with the government, said Gold, whose organization encourages Latino participation in civic life.

If enough immigrants avoid the census, the decennial count could be off by a lot.

Undercounting is a big deal. Every 10 years, the census counts every person in the country “once, only once, and in the right place.” There are no do-overs.

Overseen by the Commerce Department, census results determine the apportionment of congressional seats, as well as federal resources for things like health care services, infrastructure planning, disaster preparedness and research. So, inaccurate counts affect not just immigrants, but everyone living alongside them. There’s a real worry that communities that are already marginalized could be marginalized further if they’re undercounted.

In a sternly worded, 277-page ruling Tuesday, Judge Jesse M. Furman wrote that while the citizenship question itself is not unconstitutional, Commerce Secretary Wilbur Ross acted in an “arbitrary and capricious” manner in pushing the question through. Ross added in the question in March 2018, saying it was necessary to help the government enforce the 1965 Voting Rights Act. Furman said that justification was “pretextual,” or false.

“[Ross] failed to consider several important aspects of the problem; alternately ignored, cherry-picked, or badly misconstrued the evidence in the record before him; acted irrationally both in light of that evidence and his own stated decisional criteria; and failed to justify significant departures from past policies and practices.”

“[Ross] failed to consider several important aspects of the problem; alternately ignored, cherry-picked, or badly misconstrued the evidence in the record before him; acted irrationally both in light of that evidence and his own stated decisional criteria; and failed to justify significant departures from past policies and practices,” Furman wrote.

Several more legal challenges to the census citizenship question are underway around the country. They’ve been brought by states, cities, counties, the US Conference of Mayors and immigrant rights’ or civic groups. One trial in California wrapped up this month, and another will start Jan. 22  in Maryland.

Racial and ethnic minorities, immigrant populations and non-English speakers have historically been considered “hard to count” for reasons such as language barriers, legal status and housing stability. Under past administrations, the Census Bureau has taken pains to build their trust so they will fill out the questionnaire.

In 2000 and 2010, the Census Bureau worked with ICE and its predecessor, the Immigration and Naturalization Service, to ensure immigration raids were not being conducted as the census was ongoing. It ran advertising campaigns in more than a dozen languages and hired noncitizens with bilingual skills to go door-to-door following up with households that might misunderstand or mistrust the census process. Even then, undercounts persisted.

But for the 2020 survey, the Census Bureau reportedly will not hire noncitizens — a move seen as political at a time when a low unemployment rate makes it a harder market to hire for.

Kenneth Prewitt is one of six former Census Bureau directors who submitted a joint letter to Ross last January warning him of the consequences of including a citizenship question.

“There is a great deal of evidence that even small changes in survey question order, wording and instructions can have significant, and often unexpected, consequences for the rate, quality and truthfulness of response,” wrote the directors, who served under both Democratic and Republican administrations.

“Mistrust of the government is very different. Back then, if someone suggested whether we should add a citizenship question, we’d say, ‘We don’t need it because it’s on the American Community Survey.’ We wouldn’t have been anxious about it. But a lot has changed.”

“The mood today is very different than it was in 2000,” said Prewitt, who oversaw that year’s census. “Mistrust of the government is very different. Back then, if someone suggested whether we should add a citizenship question, we’d say, ‘We don’t need it because it’s on the American Community Survey.’ We wouldn’t have been anxious about it. But a lot has changed.”

The American Community Survey is an ongoing, annual survey of just over 3.5 million randomized households that is also administered by the Census Bureau. The ACS asks more detailed questions than the decennial census, inquiring about things like commute times, the type of home people live in and their access to running water and internet.

Immigrants were worried about the citizenship question long before it was officially announced last March. Back in November 2017, a research scientist for the Census Bureau studying the results of census “pretests” — or training exercises — conducted earlier that year found that respondents were “spontaneously expressing concerns to researchers and field staff about confidentiality and data access relating to immigration.” It happened across many different foreign communities, including Latinos, Asians and Arabs. Respondents falsified data such as their names and birthdates, skipped questions, undercounted members of their households and skipped out on interviews, leaving census workers behind in their homes. The findings showed an “unprecedented ground swell in confidentiality and data sharing concerns, particularly among immigrants or those who live with immigrants ... [that] could impact data quality and coverage for the 2020 Census.”

There’s at least some historical precedent for their worry. The citizenship question used to be asked of all households until the 1950 census. Data from 1940 was secretly used to locate and round up residents of Japanese descent and incarcerate them during World War II, according to research by statistician William Seltzer and historian Margo Anderson. Now, confidentiality around census data is much stronger.

The 2020 census will also take place as a particularly “intense, polarized and angry” presidential election campaign is underway, Prewitt pointed out.

In past years, the federal government did more to reassure people their census responses would not be shared across government agencies, said Randy Capps, director of US research at the nonpartisan Migration Policy Institute in Washington, DC. It also put more effort into reassuring people the census answers would not be used for political purposes, such as congressional redistricting in 2021.

“There are things they could [do] to allay people’s fears. Instead, they are doing things to make the fears worse. That appears to be in their political interest.”

“It’s not just the general climate around immigrants. It’s the specific safeguards that don’t appear to be in place,” Capps said. “There are things they could [do] to allay people’s fears. Instead, they are doing things to make the fears worse. That appears to be in their political interest.”

The government will have to do much more to earn immigrants’ trust if it wants an accurate census count, advocates say.

“The political and policy environment under this administration is completely different,” Gold said. “The mistrust of the federal government has grown dramatically. … The administration must do much more to win people’s confidence in the privacy of these data.”