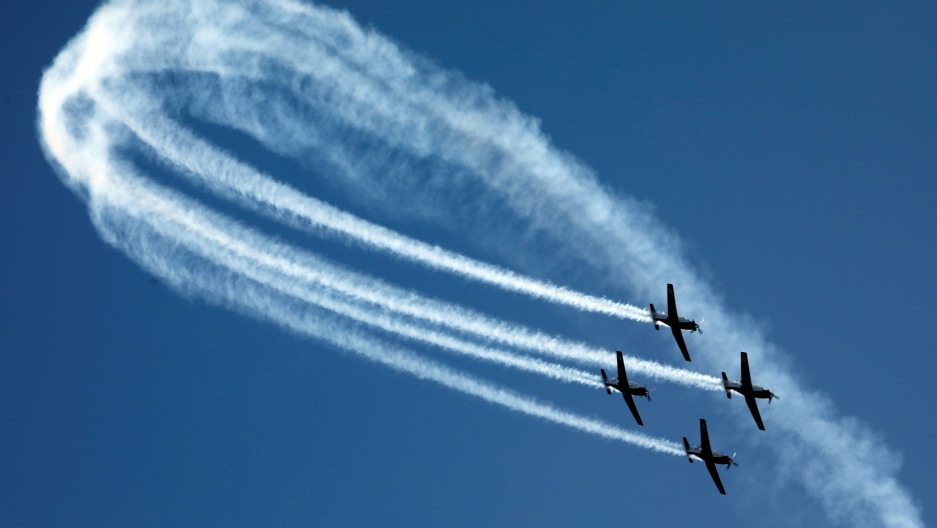 Israel has a powerful air force — and it’s not afraid to strike neighbors it perceives as a national security threat.

Iran shot down a US drone on June 19, further escalating tensions between Iran and its adversaries.

Relations with Iran have been worsening for months. In early May, one year after the United States withdrew from the nuclear deal negotiated in 2015 between Iran, the US, the European Union and five other countries, Iranian President Hassan Rouhani said that his country may also withdraw from the agreement, which limits its ability to develop nuclear weapons in exchange for lifting sanctions.

In June, Rouhani announced that Iran will restart uranium enrichment, which could put the country on track to develop a nuclear weapon within a year. Rouhani’s government insists its uranium will go to civilian nuclear power, not weapons.

As a “deterrent” to Iran, the United States is sending an additional 1,000 troops to the Middle East.

The US is not the only country considering a military response in Iran.

Israel, which has faced threats to its national security since its founding as a Jewish homeland in the Middle East in 1948, is known to take aggressive, preventive action to protect itself — including by launching preemptive strikes on neighboring nations it perceives as threatening.

If international relations with Iran grow more volatile, Israel could take dramatic, unilateral action against its neighbor and longtime adversary.

I’m an international security scholar who studies Israel’s proactive use of its military to prevent nuclear buildup in the Middle East.

Israel has a counterproliferation policy, called the Begin Doctrine, which allows it to wage preventive strikes against enemies with weapons of mass destruction programs. Using the Begin Doctrine as a justification for preemptive strikes, the Israeli government has for decades quietly decimated nuclear and chemical facilities across the Middle East.

“On no account shall we permit an enemy to develop weapons of mass destruction against the people of Israel,” a government release stated at the time. “We shall defend the citizens of Israel in good time and with all the means at our disposal.”

In 2007, Israel responded to Syria’s failure to report its uranium processing by striking a nuclear reactor in the Deir ez-Zor region. The United States, which was reportedly informed ahead of the attack, made no effort to stop Israel.

Israel has also been accused of sponsoring the assassinations of at least four Iranian nuclear scientists since 2010. The incidents have never been fully investigated, and Israel has neither confirmed nor denied responsibility for the targeted killings.

Related: A massive US weapons deal with Israel means more weapons for its Arab neighbors, too

In 2008 and 2009, Israel used computer malware called Stuxnet to disrupt Iran’s nuclear infrastructure. The program infected the software that controlled centrifuge speed at the Natanz nuclear plant, alternately speeding up and slowing down the machines that produce enriched uranium to cripple production of the material. The Obama administration secretly supported the cyberattacks.

Though the United States, United Nations and other world powers officially condemned some of these unprovoked Israeli military aggression, other preemptive Israeli attacks have been met with silence from the international community.

The international community may even appreciate Israel’s role as a nuclear nonproliferation watchdog in the Middle East, my research suggests. Israel has never been punished for attacking its neighbors’ weapons programs.

“It kept Saddam Hussein from developing nuclear power,” he said at the 2005 Davos World Economic Forum.

“But it’s not clear to me they have that option in Iran,” he added.

That was 14 years ago. In 2005, Iran was just beginning its nuclear buildup.

Today, Israel’s government seems strong in its belief that it has the option to strike Iran.

Iran’s Islamic fundamentalist government is openly hostile to Israel. Citing fears that Iran would use nuclear weapons against Israel, Netanyahu has warned, “Iranian acquisition of nuclear weapons would be infinitely more costly than any scenario you can imagine to stop it.”

He told Iran and other adversaries not to “test” Israel.

If the nuclear deal ruptures further and Iran does restarting uranium enrichment, Israel might launch targeted airstrikes against it. 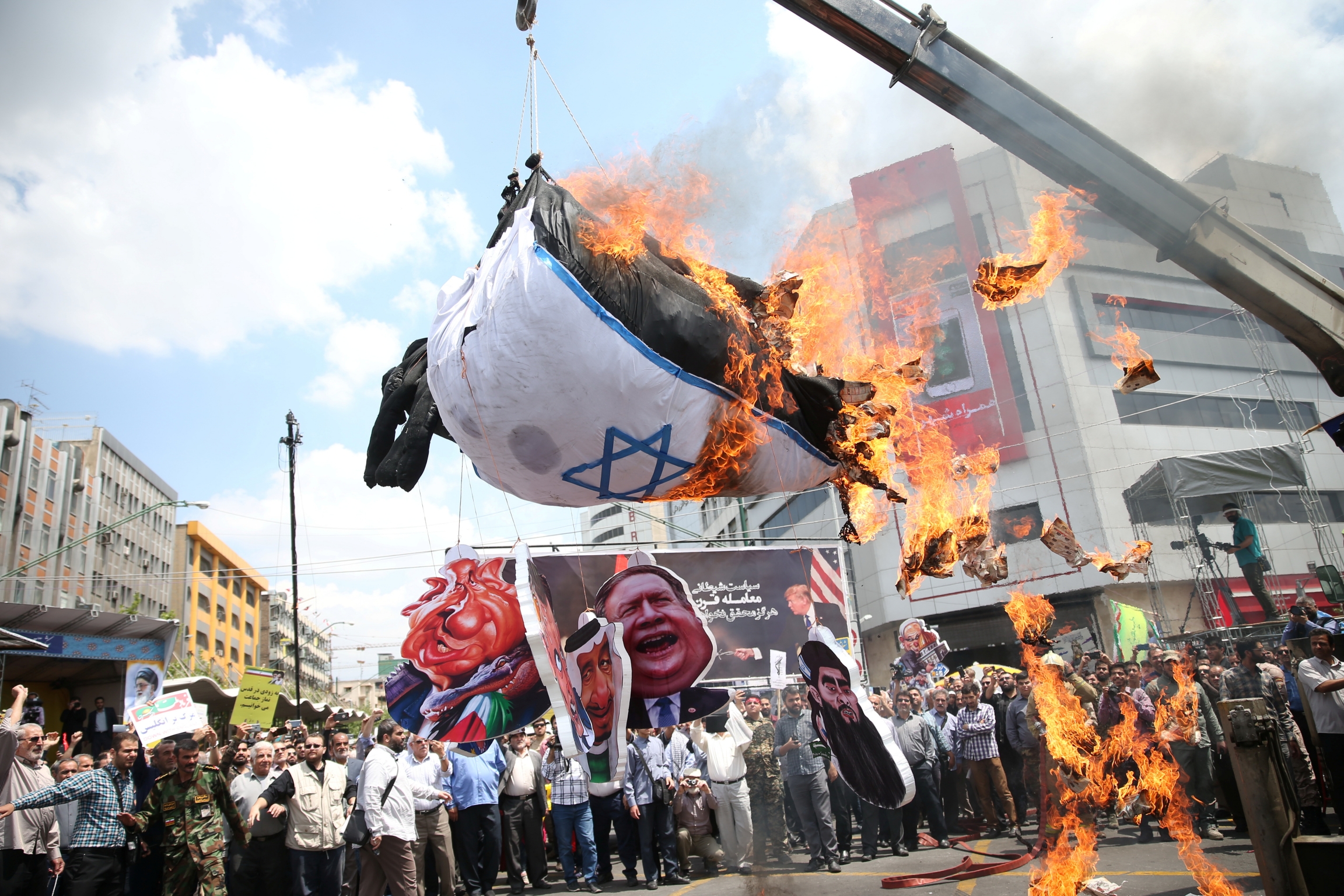 Iranians burn an Israeli flag during a protest marking the annual al-Quds Day (Jerusalem Day) on the last Friday of the holy month of Ramadan in Tehran, Iran May 31, 2019.

Risks of an Israeli strike

History suggests other countries are unlikely to actively deter Israeli military aggression in the guise of nuclear nonproliferation.

The Trump administration has expressed anti-Iranian sentiment and is a staunch backer of Netanyahu’s government.

And while European powers will recognize preemptive Israeli strikes on nuclear facilities as a violation of international law and of the sovereignty of Israel’s neighbors, they also see Iran’s nuclear program as a grave global security concern.

A nuclear Iran could escalate ongoing Middle East conflicts into nuclear exchanges, and, as some commentators say, spur other regional powers like Saudi Arabia and Egypt to develop nuclear weapons themselves.

Of course, potential Israeli attacks on Iran present their own serious risks. Because most of Iran’s reactors are in full operations, air strikes may mean cutting off the power supply to Iranian citizens and could release large amounts of radioactive contaminants into the air.

Iran, a militarily well-equipped country, would surely retaliate against any Israeli attacks. That, too, would trigger a conflict that would spiral throughout the Middle East.

Of course, Israel faced similar dangers when it went after the weapons programs of Syria, Iraq and other neighbors.

If history is any guide, Israel may strike Iran while the world quietly watches.

Doreen Horschig is a PhD candidate in security studies at University of Central Florida.