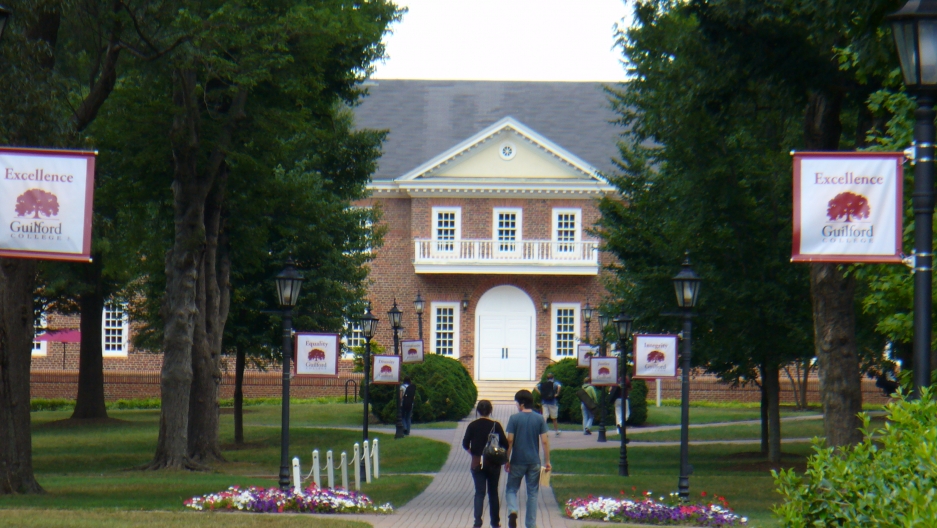 Guilford College in Greensboro, North Carolina, is a plaintiff in a lawsuit challenging the US government's new policy on how international students accrue unlawful presence. They argue that foreign students could inadvertently find themselves subject to years-long ban because of the policy implemented by United States Citizenship and Immigration Services in August 2018.

International students in the US have to follow a lot of rules: They can only work part-time, on-campus jobs; they have to maintain a full course load and they must prove they can pay for tuition and living costs.

But under the Trump administration, international students are facing new administrative hurdles, some proposed and some already in effect. There’s been an increase in student application fees and new ways to punish students who violate the conditions of their visas — even if the violation was inadvertent. And there’s intense scrutiny over permit programs that enable students to get work in the US after graduating from their studies.

These changes have drastically altered the policy landscape for international students in the US over the past two years. Advocates say the new rules are restricting and complicating student visa holders’ abilities to enter the US, maintain their legal status in the country, and ultimately obtain permits to work.

"... policies from the current administration are already reshaping and creating a chilling effect for study in the United States.”

“The reality is that implemented and proposed policies from the current administration are already reshaping and creating a chilling effect for study in the United States,” says Jill Welch, deputy executive director for public policy with NAFSA: Association of International Educators. “Students need certainty in the process. Studying in the United States is a significant investment from them, and they need predictability and certainty that the rules of the game won't be changed while they are applying.”

There are signs those changes are driving international students away from higher education in the US — students who are a boon for many US college campuses because they usually pay higher tuition rates.

Among the starkest examples of the Trump administration’s toughened stance on international students is a policy memorandum by United States Citizenship and Immigration Services that went into effect in August 2018. The policy changes how USCIS calculates “unlawful presence” — and advocates say it makes international students more vulnerable to deportation and three- or 10-year reentry bans to the US. Last month, a judge issued a preliminary injunction that temporarily prevents the federal government from implementing the new rules.

Several universities, a student group, a teachers’ union and two former college students from China filed the lawsuit in December 2018 to stop USCIS from implementing the change. They argue that USCIS did not seek public input on the changes and that international students could be inadvertently subject to serious penalties.

“It creates enormous fear for international students who are thinking about where they want to pursue their undergraduate or graduate education.”

“It creates enormous fear for international students who are thinking about where they want to pursue their undergraduate or graduate education,” says Paul Hughes, an attorney representing the plaintiffs.

News of the temporary injunction came as a relief to many international students. At the end of May, both sides in the lawsuit asked the judge to make a decision.

The US has been a top destination for students and researchers from around the globe for decades. But according to NAFSA, the US has experienced a nearly 10% drop in the number of newly enrolled international students in the last two academic years.

More: Fewer international students coming to US grad schools in science and engineering

Advocates say the overall anti-immigrant rhetoric from this administration makes the US less attractive for prospective students.

Advocates say the overall anti-immigrant rhetoric from this administration makes the US less attractive for prospective students. And they worry that other proposals — including a plan to impose a maximum number of years that a student can stay on their visa, heightened scrutiny for work visas after graduation, and a push to end a program that allows international students to stay and work in the US after completing their academic programs — could exacerbate feelings that the US is no longer a welcoming place for them.

At the heart of the “unlawful presence” lawsuit is a change in how the federal government decides when someone’s visa is “out of status” — which means they no longer have authority to be in the US.

Depending on the amount of unlawful presence accrual, students could be banned from entering the US up to 10 years or permanently.

In the past, USCIS had to formally issue a finding that a person violated his or her visa and is no longer authorized to be in the US, before they start accruing unlawful presence. But the USCIS proposal starts unlawful presence accrual on the day of the alleged violation.

According to Hughes, there are circumstances where students with good intentions might not know they are “out of status” and are accruing unlawful presence.

“[With the change] it's simply that the clock will be backdated. You effectively create all these time bombs of individuals who, knowingly or not, are out of status,” Hughes said.

Students can find themselves in violation of their visas for minor missteps they cannot control, such as a university administrator's typo on their records.

Students can find themselves in violation of their visas for minor missteps they cannot control, such as a university administrator's typo on their records. Foreign students are required to report if they move or if they change their major to a school administrator, who then enters the information into a government database.

More: How H-1B work visas transformed tech and education in the US and India

“There are many ways to violate status, and many of these ways are, for many international students, it’s very hard for us to know,” said Jesus Cruz-Garza, an international student from Mexico who is getting his doctorate in electrical engineering at the University of Houston. “Many of us are not legal experts, so it's possible to violate your status without knowing it.”

USCIS declined to comment for this story, citing pending litigation. But in its memo last year, the agency said the change was meant “to reduce the number of overstays” among student visa holders. In another document, the agency described the change as a “clarification of the unlawful presence” rule and that it holds “foreign students accountable” for visa violations.

The international student plaintiffs who are part of the federal lawsuit on “unlawful presence” are in a unique position. They joined the US military through the Military Accessions Vital to the National Interest program, or MAVNI, which recruits legal immigrants with special skills for a few years of military service in exchange for expedited citizenship.

Background checks for MAVNI has slowed to a trickle in recent years. The wait is so lengthy, that the students have since graduated and therefore are no longer on student visas as of February this year. Under the USCIS change, if they continue to stay in the US, they could be deported and banned from re-entering. But if they go back to their home country, they would violate their military contracts.

One of the plaintiffs, Jia Ye, talked about this state of limbo in a video produced by immigrant advocacy group FWD.us. He says former students like him are, “a bunch of people with great potential, great education, great skills, prepared to make contributions to this country."

The MAVNI program allowed the U.S. military to recruit immigrants with critical language and medical skills and for those immigrants to earn citizenship. Right now the program is frozen and many enrollees are in jeopardy of being barred from the U.S. because of a new policy out of the Trump Administration. Watch their story here.

More restrictions on the way

Another issue worrying international students is a proposal to limit on the number of years students can stay in the US — a drastic change from current policy where students have the ability to stay in the US indefinitely as long as they maintain their student visas.

Unlike other types of visas, international students are often allowed “duration of stay” in the US as long as they follow all the rules and they continue their studies. But the proposal from ICE puts a maximum on the number of years that students can stay — potentially forcing students to complete degrees in a shorter timeframe or placing restrictions on those who want to participate in doctorate programs, which often take several years to complete. Public comments on the proposal will start in Fall 2019.

Cruz-Garza says the proposal is a concern for graduate students, especially those in the sciences who need to conduct experiments as part of their dissertations. He says it’s hard to know upfront when an experiment will be done and to have an end date for a doctorate program.

“It's very hard to predict a particular day that you would be graduating,” says Cruz-Garza.

International students say the uncertainty from proposed and pending visa changes makes it harder to create plans for the future.

“When people ask me whether I want to say or not and I don't know how to answer it because I don't know whether I will get to stay or not,” says Vedant Deepak Kulkarni, an international student from India at Kansas State University. “The current visa rules have made it a little difficult for ... especially international students, to get those working visas and carry on with the studies and work in America.”

In Texas, graduate student groups from four universities came together to create the Texas International Graduate Student Advocacy, with the goal of advocating around the issues of unlawful presence and maximum period of stay. The group sent an open letter earlier this year to lawmakers urging them to take a closer look at proposals from the administration.

The letter states that USCIS’ proposed policies could have detrimental effects on the ability and desire of international students to pursue graduate research and education in Texas and the United States.

The letter urges “prompt examination of the factors that impede our ability to bring high-quality talent from around the world to pursue graduate studies in the United States.”