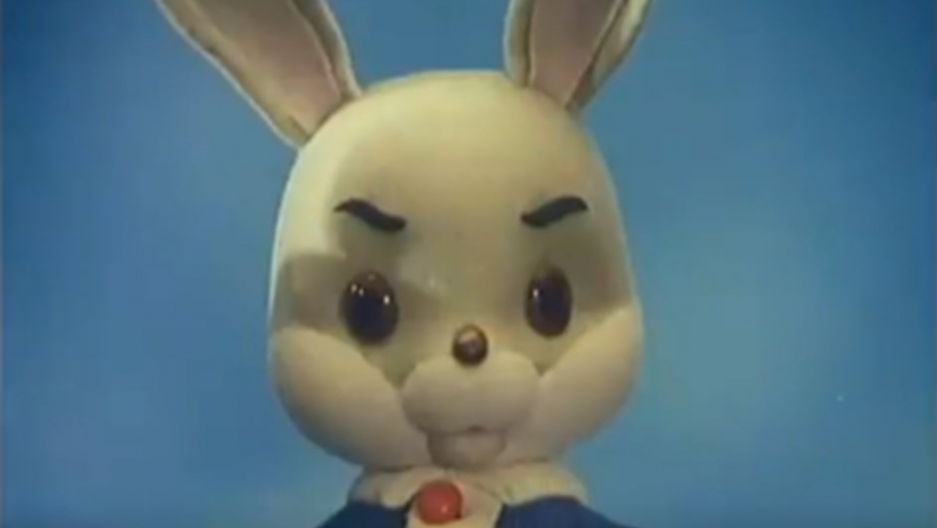 The North Korean TV show "Bunny Brothers and the Wolf" features cute rabbits who exact violent revenge against their nemesis, the wolf.

In recent weeks, North Korean television has aired an animated show titled “Bunny Brothers and the Wolf.” It was spotted by BBC Monitoring staff, who scan TV feeds around the world. Like most original programming on North Korean TV, it was likely produced under the auspices of the Propaganda and Agitation Department, directed by Kim Yo-jong, the younger sister of Kim Jong-un.

The show’s heroes are plump bunnies wearing spiffy sweaters. They are tormented by a wolf — a gangly, snarling creature determined to invade their lives. But do not mistake the bunnies’ cuteness for weakness.

Prey upon them and you may die screaming.

Just your everyday story of fluffy bunnies beating the crap out of a wolf on North Korean TV pic.twitter.com/ZZDvrCQAig

This is a lesson they teach the wolf over and over. They stomp his wolf fingers with their bunny feet. They cast him into a fiery pit. They force him into a hole and stone him until his snarls go quiet.

But the wolf never learns. He dies over and over, like Wile E. Coyote, only to crawl back and hatch more schemes. Through pluck and comradeship, the bunnies always defeat the dastardly wolf — often giggling and cheering as they finish him off.

I missed this one from earlier this week: Just your everyday story of cute fluffy bunnies stoning a wolf to death in a hole then laughing about it afterwards pic.twitter.com/JgwwPRnreg

Exact details about “Bunny Brothers” are elusive. It’s hard to determine when it was created. The show has aired in recent weeks yet appears vintage, with production values on par with the Burl Ives-voiced “Rudolph the Red-Nosed Reindeer” stop-motion animation from the 1960s.

The show is definitely amusing — but is it meant to be funny? Hard to say. The violence is quaintly reminiscent of "Tom and Jerry." The beatings are brutal, for sure, but hardly gruesome. There’s no blood in the series of clips posted by Alistair Coleman at BBC Monitoring. He believes the show was produced by an animation studio that also churns out other kid-centric programs.

That studio is called April 26 Animation Studio — and so prestigious that Kim Jong-un himself recently stopped by to praise its workers. They’ve produced cartoons for European television and contributed to such titles as “The Spaghetti Family” and “Papa Beaver’s Storytime.”

But the most interesting question about the “Bunny Brothers” concerns its villain, the wolf.

Sigley can’t speak to the animators’ intentions but says that “wolf-like American imperialist bastards” is a phrase that has often been used in the country’s propaganda. Even in speeches by Kim Jong-il, he says, US imperialists have been likened to wolves: predatory, rapacious beasts by nature.

“The cultural stereotype of bloodthirsty, outside invaders is quite strong — and it’s one that has at least some historical basis.”

Indeed, this is the granddaddy of all North Korean narratives: underdog fends off menacing foreign invader.

It was entrenched through the Korean War, in which the US, by the admission of its own top generals, “killed off — what? — 20% of the population” and “bombed everything that moved in North Korea, every brick standing on top of each other.”

There’s no carpet-bombing in “Bunny Brothers” — at least not in the available clips — but another program by April 26 Animation Studios is more explicit in its portrayal of war-like wolves.

The North Korean cartoon “Squirrel and Hedgehog” imagines a world in which heroic critters (squirrels and hedgehogs) are besieged by uniformed wolf platoons that run amok with flamethrowers and machine guns.

Given all this evidence, it’s natural to assume that the wolf in “Bunny Brothers” is a proxy for “wolf-like American imperial bastards.”

“You shouldn’t assume everything is about politics in North Korea,” says Fyodor Tertitskiy, an author and analyst with the outlet NK News who can understand Korean in the northern dialect. He has seen his fair share of North Korean propaganda and, at The World’s request, reviewed a few short “Bunny Brothers” clips.

North Korean propaganda is “usually not very subtle,” he says. “They’d just say, ‘The evil American bastards must die!’” He says we shouldn’t assume there’s an anti-American message hiding behind every cartoon monster.

Tertitskiy says this is like deducing that, in “Star Wars,” Emperor Palpatine is actually a stand-in for the head of the Soviet Communist Party and Luke Skywalker actually represents the CIA.

“It’s like saying, ‘This is an American film. It was made during the Cold War,” he says. “So, of course, it must be about Americans fighting the Soviets.’”

Precise details about “Bunny Brothers,” like so much in North Korea, seem elusive, at least to observers from afar. Perhaps its pro-underdog theme is influenced by Korean history — but, ultimately, the wolf really is just a wolf. Or maybe it’s about as propagandistic as, say, GI Joe.

It at least offers evidence that North Koreans, like Americans, enjoy a bit of silly animated violence. Never mind “Bunny Brothers.” Some North Korean defectors claim that a similar show has also aired on Pyongyang’s airwaves: “Tom and Jerry” itself.

In North Korea, according to one South Korean paper, the American show goes by a different name: “The Magic World of a Mouse.” That title suggests the regime’s apparatchiks prefer rooting for Jerry, a tiny underdog forever outwitting his lumbering, violent rival.