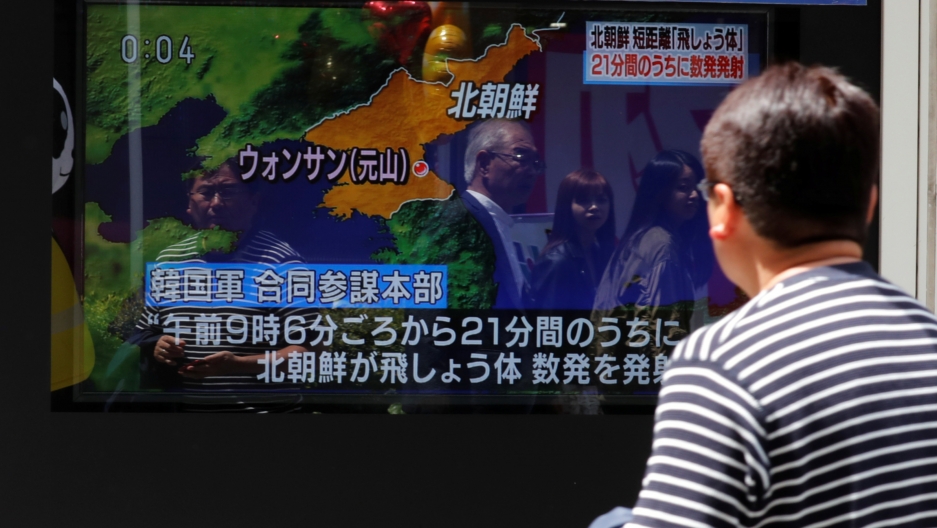 A man watches a television screen showing a news report on North Korea firing several short-range projectiles from its east coast, on a street in Tokyo, Japan, May 4, 2019.

North Korea’s leader, Chairman Kim Jong-un, clearly is in no hurry to demilitarize his country. In the wake of two historic yet unproductive summits with President Donald Trump, Kim made a state visit in April to Moscow, where he made clear that his country will not give up its nuclear weapons without international security guarantees. North Korea also tested what appeared to be short-range missiles on April 18 and May 4.

These tests are reminders that North Korea’s military forces, particularly its nuclear arsenal, pose a serious threat to the United States and its Asian allies. This reclusive nation is a high-priority US intelligence target, but there are still large uncertainties about the power of its nuclear weapons. North Korean scientists work in isolation from the rest of the world, and defectors are far and few between.

My research focuses on improving techniques for estimating the yield, or size, of underground nuclear explosions by using physics-based simulations. Science and technology give us a lot of tools for assessing the nuclear capabilities of countries like North Korea, but it’s still difficult to track and accurately measure the size and power of their nuclear arsenals. Here’s a look at some of the challenges.

A nation in the dark

For an isolated nation like North Korea, developing a functional nuclear weapons program is a historic feat. Just eight other sovereign states have accomplished this goal — the five declared nuclear weapons states (the United States, Russia, Britain, France and China) plus Israel, India and Pakistan.

North Korea has been developing nuclear weapons since the mid-1980s. Paradoxically, in 1985 it also joined the Treaty on the Non-Proliferation of Nuclear Weapons, or NPT, under which it pledged not to develop or acquire nuclear weapons. But by 2002, US intelligence discovered evidence that North Korea was producing enriched uranium — a technological milestone that can yield explosive material to power nuclear weapons. In response the US suspended fuel oil shipments to North Korea, which prompted the North to leave the NPT in 2003.

Then the North resumed a previously shuttered program to extract plutonium from spent uranium fuel. Plutonium-based nuclear weapons are more energy-dense than uranium-based designs, so they can be smaller and more mobile without sacrificing yield.

North Korea conducted its first nuclear test on Oct. 6, 2006. Many experts considered the test to be unsuccessful because the size of the explosion, as determined from seismograms, was relatively small. However, that conclusion was based on incomplete information. And the test still served as a powerful domestic propaganda tool and international display of might.

Since 2006 North Korea has conducted five more nuclear tests, each one larger than the last. Scientists are still working to measure their yield accurately. This question is important because it reveals how advanced the North Korean nuclear program is, which has implications for global security.

Estimates of the size of North Korea’s most recent test in September 2017 place it between 70 and 280 kilotons of TNT equivalent. For reference, that’s five to 20 times stronger than the bomb that was dropped on Hiroshima. In fact, the explosion was so strong that it caused the mountain under which it was detonated to collapse by several meters.

We have a variety of tools for gaining knowledge about these events, ranging from satellite imagery to radar and seismograms. These methods give us an idea of North Korea’s capabilities, but they all have drawbacks. One difficulty common to all of them is uncertainty about geological conditions at the test site. Without a good understanding of the geology, it’s difficult to accurately model the explosions and replicate observations. It is even harder to constrain the error associated with those estimates.

Another, less understood phenomenon is the effect of fracture damage at the test site. North Korea has conducted all of its nuclear tests at the same location. Field experiments have shown that such repeat tests dampen the outgoing seismic and infrasound waves, making the explosion appear weaker than it actually is. This happens because the rock that was fractured by the first explosion is more loosely held together and acts like a giant muffler. These processes are poorly understood and contribute to even more uncertainty.

Additionally, my research and work by other scientists have shown that many types of rock enhance the production of earthquake-like seismic waves by underground explosions. The more energy from an explosion that gets converted into these earthquake-like waves, the more difficult it becomes to estimate the size of the explosion.

What do we know?

What US officials do know is that North Korea has an active nuclear weapons program, and any such program poses an existential threat to the United States and the world at large. Intelligence experts in South Korea and nuclear scientists in the United States estimate that North Korea has between 30 and 60 nuclear weapons in reserve, with the ability to produce more in the future.

It’s still unclear how far North Korea can deliver nuclear weapons. However, their ability to produce plutonium enables them to make small, easily transportable nuclear bombs, which increase the threat.

In the face of such developments, one course of action available to the US that would serve our country’s national security interests is to negotiate with North Korea in good faith, but accept nothing less than complete nuclear disarmament on the Korean peninsula. And any such agreement will have to be verified through disclosures and inspections to ensure that North Korea doesn’t cheat.

That’s impossible if US experts don’t have an accurate accounting of what the North has achieved so far. The more that Americans negotiators know about Pyongyang’s nuclear activities to date, the better prepared they will be to set realistic terms if and when North Korea decides — as other nations have — that its future is brighter without nuclear weapons.

Marshall Rogers-Martinez is a PhD candidate at the University of Southern California – Dornsife College of Letters, Arts and Sciences.