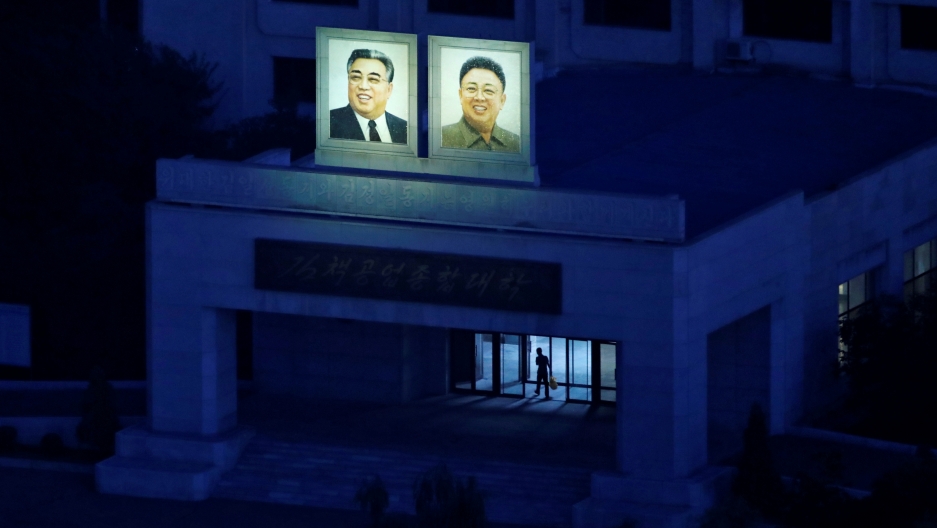 Portraits of late North Korean leaders Kim Il-sung and Kim Jong-il are seen on the facade of a building at Kim Chaek University of Technology pre-dawn in Pyongyang, North Korea, Sept. 8, 2018.

Update: Alek Sigley, an Australian student who was detained in North Korea, was freed and safely left the country on Thursday, after Swedish officials helped broker his release. Sigley had been missing since June 25. He declined to comment about what happened to him in the North Korean capital of Pyongyang where he had been living. He made a peace sign as he walked through the airport. — Reuters

For young North Koreans, there are few achievements more prestigious than attending Kim Il-sung University — the alma mater of Kim Jong-un and many of his top apparatchiks.

Inside the nation’s most elite school, students often wear crisp black blazers, some adorned with red lapel badges exalting the Kim dynasty. But there’s also a cohort of roughly 50 students who are not subjects of the regime.

Among them: Alek Sigley, a 29-year-old Australian who speaks fluent Korean. He’s one of very few students hailing from a nation that is aligned with Pyongyang’s historic rival: the “imperialist aggressor” United States. (Almost all of the other students come from China.)

Sigley is seeking his master’s degree. His thesis will be on romance in North Korean literature. In years past, he’d probably just be toiling away at his studies in obscurity.

But Pyongyang is becoming a world of smartphones — and Sigley is now the most prominent tweeter inside the North Korean capital.

Twitter appears to be officially banned in North Korea. But Sigley says authorities have neither complained about his posts nor censored them. He is also blessed with another perk: freedom to roam the capital without a government minder and visit shops off-limits to tourists.

Just a few months old, his Twitter feed has become a rare keyhole through which to view a fast-changing Pyongyang. Sigley mostly documents what North Koreans buy — and for a supposed anti-capitalist haven, they seem to do a lot of shopping.

For products such as knock-off Cocoa Puffs, produced by the state.

#NorthKorea n breakfast cereal with a chocolate/ coffee flavour. My second favourite of the six we sampled. #Pyongyang @TongilTours

At the snacks kiosk-- "Pass me that #Fanta over there. Wait..."#NorthKorea knock-off @Fanta. #DPRK #Pyongyang @TongilTours pic.twitter.com/ybJi0Bm8IE

Which is designed especially for North Korean-made smartphones.

What happens when you turn on a #NorthKorea #Pyongyang brand mobile phone. This one cuts out early though... #DPRK @TongilTours pic.twitter.com/WU29Cv1vhj

His tweets never mention North Korea’s crushing poverty nor its horrendous labor camps. What they do offer is a glimpse inside a country where a core ideological principle — resisting the “filthy winds of bourgeoisie liberty” — is softening.

Last year, Kim Jong-un proclaimed that North Korea’s successful acquisition of nuclear weapons would free up the nation to focus on its economy. This seems to have accelerated a trend that was already in motion: allowing entrepreneurs to open shops so long as they officially operate under the state — and profits are shared with officialdom.

This economic liberalization, reminiscent of China in the 1980s, has given rise to a growing nouveau riche. Their unabashed shopping in Pyongyang signals that Kim Jong-un’s North Korea has drifted farther from its Stalinist roots than ever before.

Sigley himself is an entrepreneur in North Korea. He operates Tongil Tours, a company he started five years ago to bring travelers to Pyongyang.

Related: Why Trump failed to convince North Korea to give up its nuclear weapons, and how he can do better at the next summit

Sigley spoke to The World via Skype about his life in Kim Il-sung University’s dorms and Pyongyang’s changing landscape — including people adopting a more respectful tone toward US President Donald Trump. 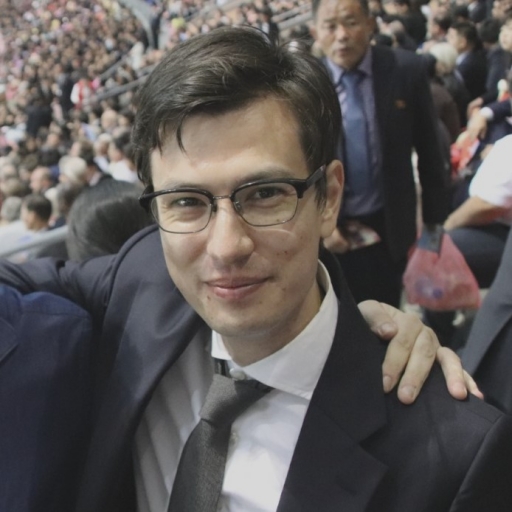 Alek Sigley is fluent in Korean and is doing his thesis on North Korean romance novels at Kim Il-sung University. He’s one of very few students hailing from a nation that is aligned with Pyongyang’s historic rival: the “imperialist aggressor” United States.

On getting into North Korea's top school:

You need connections. There’s not really an open application process. The university has a web site but, if you go there, you won’t find any information whatsoever on how to apply.

But if you’ve already started a business and made connections, then it becomes possible. They have to decide you’re trustworthy.

Because I’m doing a master’s degree, I had to show my undergrad certificate. They wanted a health examination and a police certificate stating you don’t have a criminal record [in your home country] … and I also had to get a letter from Korean faculty in Australia [at his undergrad university] vouching for my language ability.

Interestingly, at no point did they ask for an academic transcript.

On perks extended to foreigners at his university:

Basically, in Pyongyang, you can go anywhere you like. We can take the subway. We can take taxis without guides or interpreters — which is unique to foreign students. The diplomats, they have a similar degree of access within Pyongyang but, if they want to get on the subway, they’re supposed to have a Korean interpreter.

Foreigners can also use the internet [providing they have access to foreign web sites].

Foreigners can’t use the intranet — or at least, I haven’t found a way to get on.

On passing as a North Korean:

Because I’m half-Chinese, I can blend in a little bit more. There have been times when I’ve been talking to someone and halfway through the conversation they’re like, “Wait. You’re not Korean are you?”

There’s been a fair amount of liberalization. The market economy is playing an increasing role with enterprise managers [business owners connected to the state] having more freedom … and they can keep a portion of the profit as well.

As a result, the consumer economy has grown. That’s manifested itself with new restaurants opening up. They can be quite diverse: pizza, conveyor-belt sushi and very good and very authentic Chinese food.

There’s also a conveyor-belt hot pot restaurant that’s also really good. And places where you can get pasta and Western food.

Had lunch with Chinese and Swedish friends from #KimIlSungUniversity at a conveyer belt hotpot restaurant. One of my favourite restaurants in #Pyongyang. Will blog about it and other good restaurants in #NorthKorea soon :D #DPRK @TongilTours pic.twitter.com/VdHWIpWLm6

If you own a smartphone or tablet and want apps, you don’t buy them from an online store. You have to go to a physical place.

It’s usually a counter inside a bigger store. On the wall, they’ll have fliers advertising different apps. You tell the person behind the counter what you want. You pay, then you have to wait as the shop installs each app one by one onto your phone.

The North Koreans see their literature as heavily indebted to the Western tradition. Shakespeare is highly regarded […] because his works encapsulate the more unfair aspects of feudal society.

And Charles Dickens is very popular in North Korea. He’s seen as critiquing the excesses of capitalism during the industrial revolution.

What do North Korean students do for fun?

They’re not too different from uni students anywhere else. They’ll get together and have drinking parties. Or go play ping pong.

One of the things I like about North Korean people is they enjoy simple pleasures, like sitting around with friends and just singing. They don’t feel any sense of shyness about singing in public — and, of course, they’re all very good.

It starts from kindergarten, where everyone sings together as a class. So, even when people get older, they’ll get together in the park, drink some soju [rice-based alcohol] and sing. The songs are very patriotic, exalting the leaders of the country. Others are more like folk songs, romance songs or songs about the natural scenery.

Karaoke is popular as well.

A local bartender/DJ plays #TaylorSwift, #edsheeran ,@Maroon5, @BrunoMars, @coldplay and other pop stars. You can order songs from the karaoke book too so I like to sing @IronMaiden Fear of the Dark 🤘🤘🤘 and #NorthKorea revolutionary music.#Pyongyang @TongilTours https://t.co/qJ70hrzSvf

On changing rhetoric toward the US:

Before the summit in Singapore, people’s attitudes were more dogmatic. They weren’t sure they could ever trust Trump or the American government: “They started the war. We’ll never forget that.” My roommate reminded me that the American imperialists are “sworn enemies of the Korean people.”

That was in the summer [of 2017]. In the dorms, flies were starting to come in and staff were putting fly nets on the windows. One guy told me, "You know, before the Korean War, we didn’t have any flies. They were brought in by the American imperialists."

There was one [billboard] that had crosshairs on the White House with missiles coming in … and another one across from one of the main subway stations in Pyongyang. It said, "If the US imperialists strike us again, we will wipe them from the face of the earth." The text was white except for "US imperialists" in black with this scary-looking font. It reminds me of the font from those "Goosebumps" novels —a sort of drippy font.

Attitudes toward the US government seem to be loosening up a lot. Some of the anti-US slogans and propaganda billboards have been taken down.

Now some students say this is a new era. They’re still cautious. But they embrace some hope that US-DPRK [Democratic People’s Republic of Korea] relations can improve.

People are also using Trump’s title — saying President Trump — instead of just saying Trump. They’re just recognizing him as an important statesman. It’s a small thing but, in the north, they’re very fixated on some of these details.

One day in my [literary theory] class, the teacher was looking at the concept of the dramatic. He told us that […] when the Dear Respected Marshall Kim Jong-un meets the President of the United States — and puts an end to 70 years of animosity — that is dramatic!