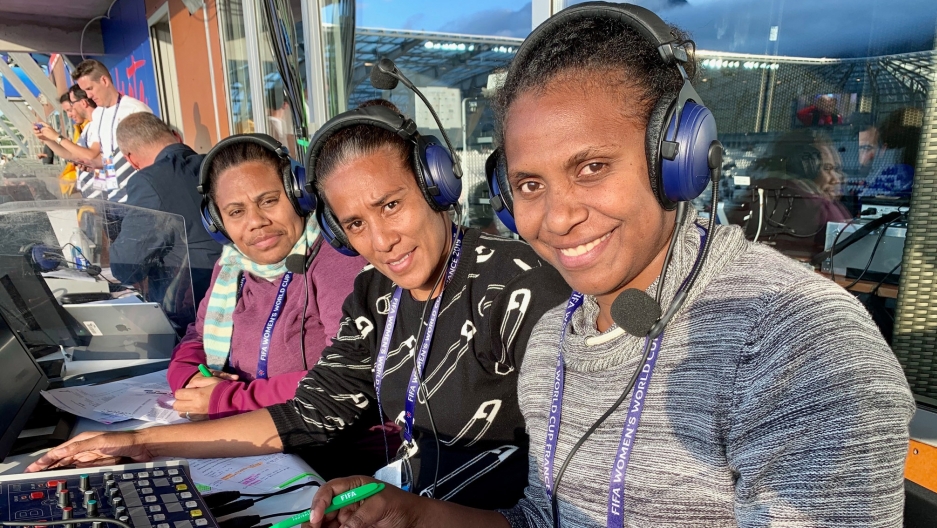 From left: Adele Willie, Lavenia Yalovi and Jennesa Hinge Moli are among the first generation of female sports commentators from the Pacific Islands.

It’s never fun to hear the sound of your own voice. But that’s part of the job for Adele Willie, Jennesa Hinge Moli and Lavenia Yalovi.

Or at least it is now.

A year ago, they were recruited to be among the first generation of female sports commentators from the Pacific Islands. Willie and Hinge Moli are from the archipelago nation of Vanuatu. Yalovi is from Fiji.

“What I like is the tone of my voice,” Hinge Moli responds shyly during a listening exercise.

Hinge Moli and her colleagues are in a cramped hotel room on the outskirts of Montpellier, preparing for their final game of the Women’s World Cup (WWC). Their mentor, Aaron Kearney, has asked them to listen back to their first commentary, a match between New Zealand and the Netherlands. 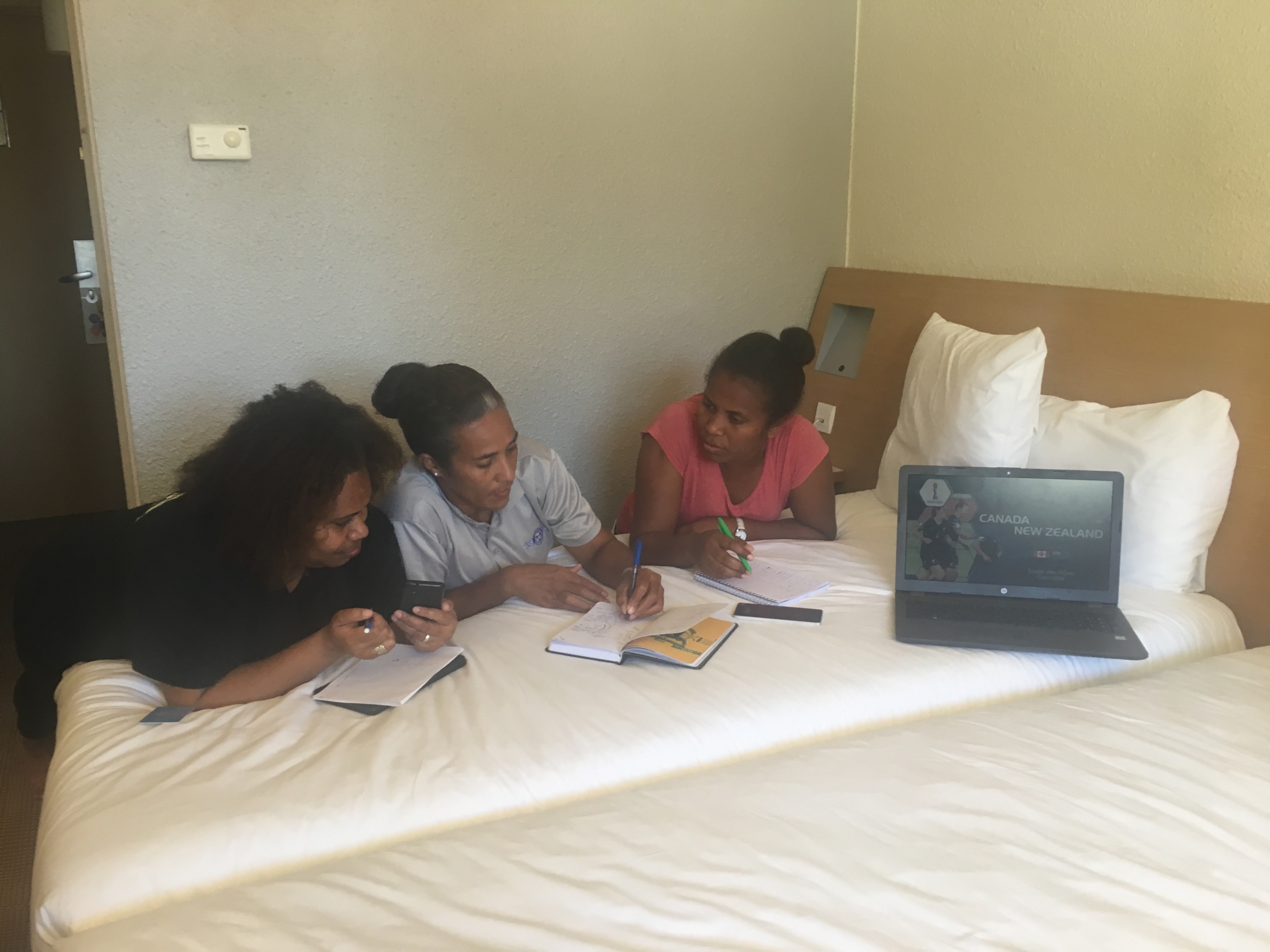 From left: Willie, Yalovi and Hinge Moli prepare for their final Women’s World Cup commentary from their hotel room in Montpellier, France.

“Now remember the word we were using was ‘crispness,’” Kearney tells them. “You got to get in with your idea, communicate it crisply and fade out.”

While there’s still studying to be done, the women are already making history. Not only are they the first female sports commentators from the Pacific Islands to commentate the Women’s World Cup, but they are also doing it in their native languages. Hinge Moli and Willie broadcast in Bislama, a type of Creole and an official language of Vanuatu, while Yalovi commentates in Fijian.

For Lavenia Yalovi, her commentating is an opportunity to connect with her native Fiji.

“It’s bringing the connection back to my country, my language and culture,” says Yalovi. “It enables those far away from the cities to tune in and say ‘Oh! I know this one! This one comes from Fiji!’”

Yalovi has played on three of Fiji’s national sports teams. But she had never thought of turning that experience into a commentating career. Then she received a call from Kearney, who was looking to put a team together.

She said she would give it a try. Yalovi was introduced to Hinge Moli and Willie, who both came from media backgrounds but had less experience in sports.

Together, they’ve been able to complement their combined sports and media skills.

“It can be a bit difficult to know the technical terms because I don’t come from a soccer background,” says Willie. “But that’s why we have Lavenia.”

Related: A #MeToo moment for Afghanistan's women's soccer: 'It happened so many times'

Last November, the fledgling commentators made their debut at the Oceania Nations Cup. Their broadcast attracted the attention of FIFA (Federal International Football Association) which organizes the World Cup tournaments, who then invited them to come to France for the WWC.

While in France, they have been calling the New Zealand matches. New Zealand beat Fiji late last year to become the Pacific champions to qualify for the WWC.

Being here, Willie says she can’t stop pinching herself.

“[In Vanuatu] women don’t do commentating,” she says. “Soccer is a male-dominated sport, so I’m very proud that we’ve made it as far as we have. It’s amazing that Bislama has taken us to the other side of the world.”

While the commentators were recruited a year ago, the idea for the project started long before that.

About ten years ago, Kearney, the project’s creator, came up with the idea for a program called “Commentary for Good.”

The goal: train people from around the world to do sports commentary in underrepresented languages. He also wanted to use sports commentary as a way to deliver messages that promote the United Nations Sustainable Development Goals (SDGs), such as gender equality or access to health care. 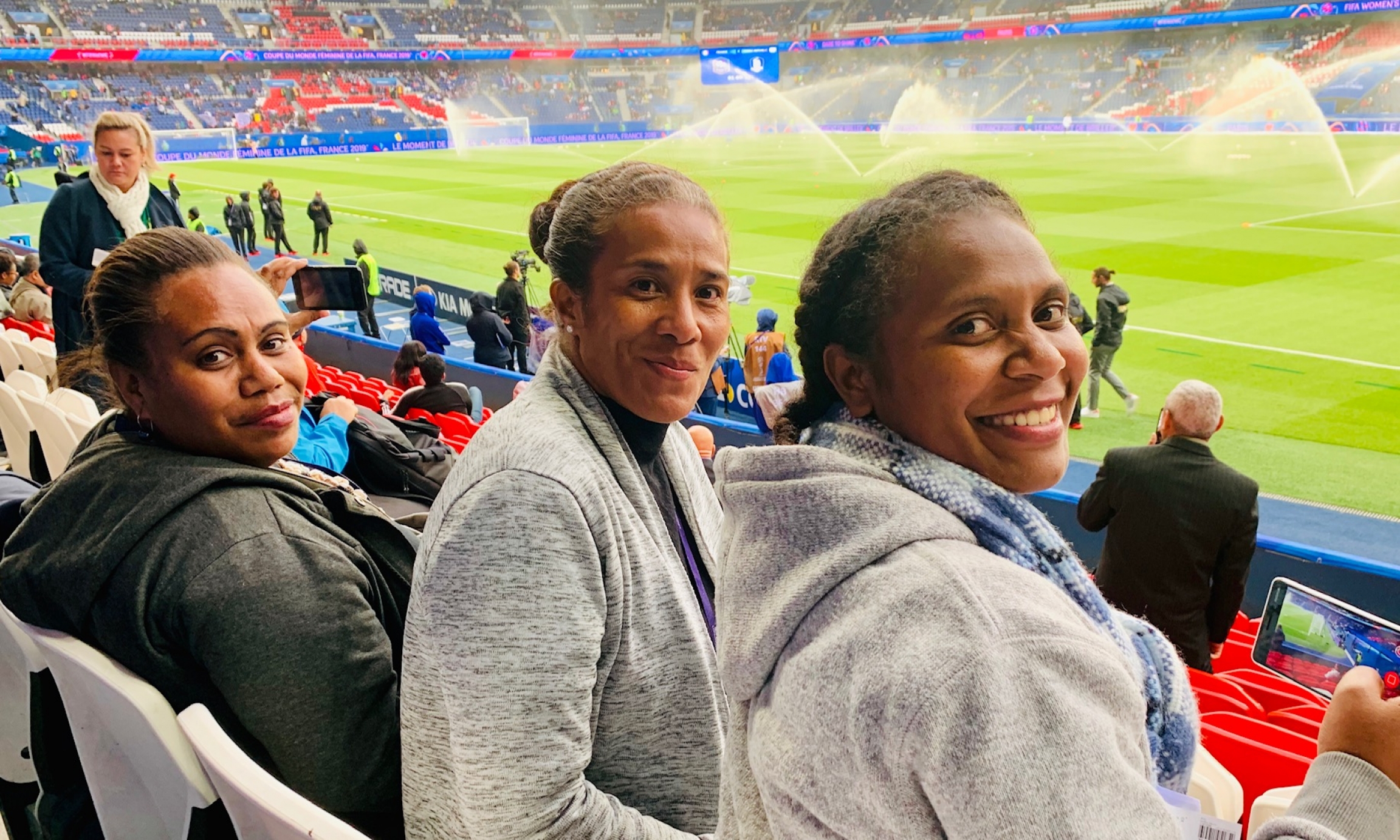 The pioneering commentators enjoy the view before a match.

“The SDGS can only be achieved if people hear and act upon them,” he says. “All across the world, you have people who say, ‘We have sexual health clinics, but it’s hard to get people to turn up; we have vaccinations but don’t know how to get the message out.'”

Kearney wanted to intertwine these kinds of messages with sports commentary.

“Sport is a universal language, everybody understands sports and everybody is enthusiastic about it,” he says.

Eventually, Kearney teamed up with a group called Women in News and Sport (WINS) to create the program that exists today.

Kearney eventually plans on expanding the program by recruiting more female commentators speaking underrepresented languages from around the world.

When asked if they’ll be back for the next WWC in 2023, Yalovi nods encouragingly.

“Or see other women coming on board and do this in the next WWC,” she says enthusiastically. “Even if I’m not there, I’ll say yeah, we did it! In 2019 we started it off. And look at what it’s become.”