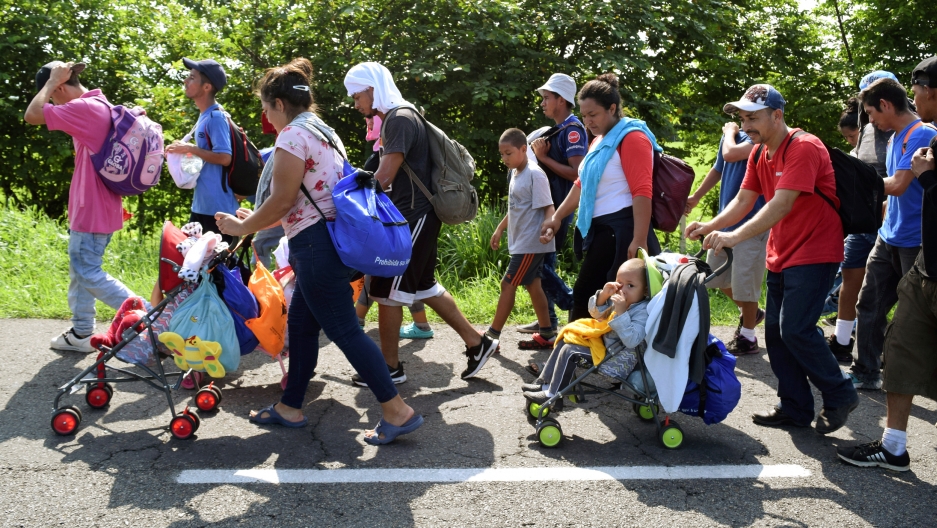 Migrants from Central America walk on a highway during their journey towards the United States, in Ciudad Hidalgo, Chiapas state, Mexico, on June 5, 2019.

US President Donald Trump's administration on Monday cut hundreds of millions of dollars in aid to El Salvador, Guatemala and Honduras after Trump blasted the three countries because thousands of their citizens had sought asylum at the US border with Mexico.

The plan will likely encounter stiff opposition in Congress.

Lawmakers, including some of Trump's fellow Republicans as well as Democrats, have chafed against the president's repeated decisions to disregard spending bills passed by Congress, some of which he has signed into law himself.

Lawmakers who opposed the plan said it was cruel to cut off aid to countries grappling with hunger and crime and that the move would be counterproductive because it would more likely increase the number of migrants than decrease it.

"As feared, a presidential tantrum will limit our nation's ability to actually help address the challenges forcing people to flee to the US," Democratic Sen. Bob Menendez said on Twitter.

The @StateDept just announced they'll finalize Trump's irresponsible order to cut off a large swath of our aid to the #NorthernTriangle.

As feared, a presidential tantrum will limit our nation's ability to actually help address the challenges forcing people to flee to the U.S. https://t.co/a8Pc0xaPMj

Trump has made reducing illegal immigration one of his signature policy pledges, both during his presidential campaign and 2-1/2 years in the White House.

All of the money for those years has not yet been spent.

The administration said in March it would cut aid to the three countries after Trump expressed unhappiness with their immigration policies.

No funds will be provided until the administration is satisfied the countries are reducing the number of migrants reaching the US border, State Department spokeswoman Morgan Ortagus told reporters.

"This is consistent with the president's direction and with the recognition that it is critical that there be sufficient political will in these countries to address the problem at its source," she said.

Without elaborating, she added: "Working with Congress, we will reprogram those funds to other priorities as appropriate."

A US official, with knowledge of plans, said the administration would review the funding by April 2020.