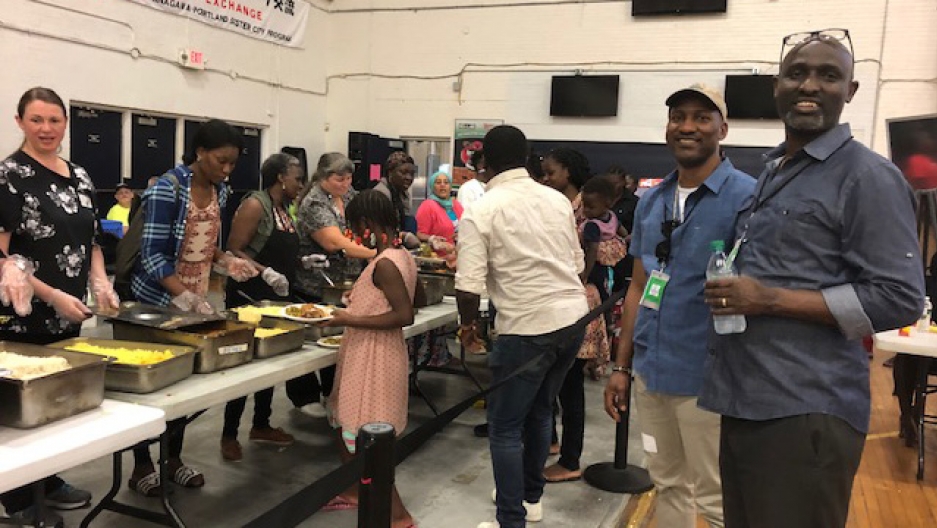 Claude Rwaganje and colleague at an event aiding asylum seekers in Portland, Maine

The city of Portland, Maine, has seen an influx of migrants from the Democratic Republic of Congo and Angola.

And as the nation engages in a heated debate over whether to welcome immigrants or keep them out, Maine's governor, Janet Mills, has said the state will help those who arrive.

"Obviously, we're having a situation here by fate, by circumstance, by the hand of God," Mills said in a meeting with municipal and state leaders in June. "And there are those who might want to make it political. I don't see it that way. None of us here sees it as a political issue. It is a humanitarian issue. The broader community of the people of the state of Maine are going to be lending a hand and helping these people who are in such dire need. They call upon us, and we will be there for them."

The Democratic Republic of Congo has been embroiled in conflict for decades. It has seen a new wave of instability since its fiercely contested 2018 general elections, which ended the rule of Joseph Kabila after 18 years in power. Internal conflict that drove Congolese citizens to Angola to work in the informal mining sector has led to regional conflict with Angola, which faces its own problems — namely, widespread corruption and dire poverty. Many of those who arrive in the US are seeking asylum.

Claude Rwaganje is among those helping these migrants acclimatize to live in Portland. Born and raised in the Democratic Republic of Congo, Rwaganje now directs a group called ProsperityME: The Center For Financial Education. Rwaganje has firsthand knowledge of the conditions refugees go through in order to find safety.

"The majority fly to Brazil," Rwaganje says. "Then they start the journey through the buses, mostly, and others walk."

Rwaganje spoke with The World's Carol Hills about the journey that asylum seekers from the Democratic Republic of Congo must endure and Maine's attitude toward them.

Carol Hills: So it could be a plane, a boat, but it definitely includes lots of walking, and then eventually, a bus ride from San Antonio?

Claude Rwaganje: Definitely. Once they landed in South America or Central America, walking was a big issue for them. And I feel so bad for the little children and mothers who are pregnant. I was talking to a mother who actually delivered in Panama, and I was talking to others who delivered in New Mexico. So I wondered how they really did this journey. It's unbelievable.

That journey is more than 10,000 miles. It takes months. Do these migrants know that when they start the journey? Do they know what's ahead of them?

I really doubt it, because if they knew how long it would take them, somebody would really reflect twice before they can put a pregnant woman on a journey or even a baby on a journey without knowing the outcome. You might reconsider taking such a risk.

Why are migrants from the Democratic Republic of Congo and Angola heading to Portland, Maine? It's certainly not a familiar climate for these migrants.

Every group wants to migrate. They go where their friends and their family members are. Portland, Maine, has been a welcoming city for many immigrants — Angolan and Congolese. So when you communicate back home people know where you are. Newcomers, they tend to go where the other immigrants have resettled.

"Obviously we're having a situation here by fate by circumstance by hand of God. ... They call upon us and we will be there for them."

So they go there because there's already people from the Democratic Republic of Congo?

Absolutely. I will add that this city is also a welcoming city to many immigrants.

The governor seems to be welcoming those in need, but at the same time, the migrants' numbers have really deluged shelters and attorney caseloads. Portland officials are kind of overwhelmed, aren't they?

Portland has even had to turn its basketball arena at the Portland Expo Center into an emergency shelter. And I know you and your staff have been there translating and helping out in other ways. Tell us what the scene looks like there with some 200 African migrants sleeping on cots.

When you go to the Portland Expo, first of all, at the entrance, you have to have a badge. You have to be signed up as a volunteer to get in because there is police at the door. Of course, there are beds everywhere, maybe a couple hundred. Then you see some tables. Interpreter agencies, medical screening, lunch and breakfast and dinner is served. We line up some tables there. Then, on the other hand, you have kids playing — they created a little station where there are some cartoons — and it's wonderful. It's wonderful to see that these children finally have a place where they can spend a day without traveling.

Related: As hundreds more asylum-seekers are sent back to Mexico, rights groups say US policy is illegal

Portland doesn't have a formal asylum assistance program, so these people who are arriving, they're unlikely to get all the help they need. And as more of their friends and family members are on the way, isn't this going to turn into a bit of a crisis? Is it sustainable to keep welcoming more and more people into Portland?

Poland may be overwhelmed on its own but definitely, we expect more cities to support as well. Once we send these migrants into different cities, I don't think this is going to be a big deal for the city of Portland at all.

Is there anything any of the migrants have said to you that particularly moved you?