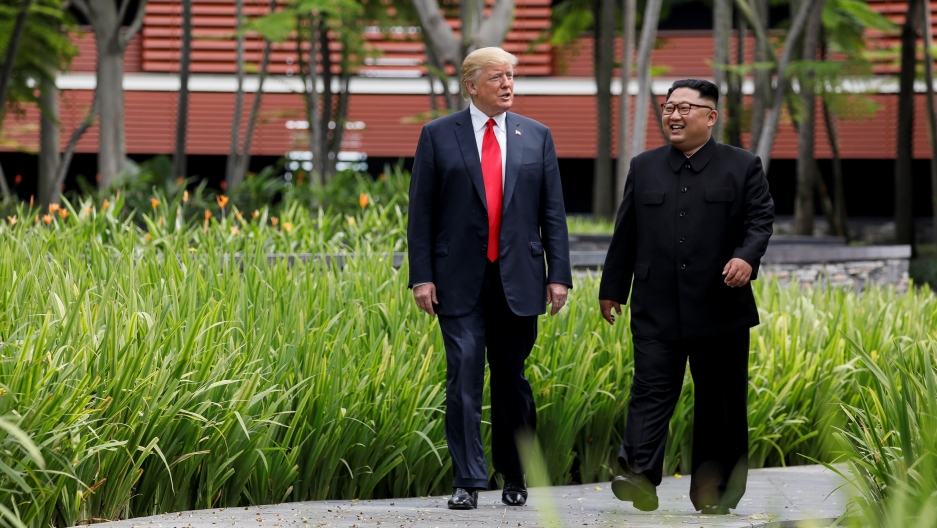 US President Donald Trump and North Korea's leader Kim Jong Un walk together before their working lunch during their summit at the Capella Hotel on the resort island of Sentosa, Singapore June 12, 2018.

Wednesday marked the one-year anniversary of US President Donald Trump's summit with North Korea's leader Kim Jong-un in Singapore. But Washington and Pyongyang remain at a stalemate over North Korea's nuclear weapons. That impasse doesn't seem to bother Trump much, who spoke highly of Kim at a press conference on June 29, saying he had received a "beautiful letter" from the North Korean dictator.

"I can't show you the letter obviously, but it was a very personal, very warm, very nice letter," Trump told reporters outside the White House.

Trump, who has tried to convert what he feels is a warm personal relationship with Kim into a diplomatic breakthrough, gave no details, but repeated that he believed North Korea had "tremendous potential."

Yeonmi Park sees through that. She is a North Korean defector who escaped from North Korea with her mother at just 13 years old.

"We are living in a world right now, in this 21st century [in which] a dictator like Hitler can be praised."

"It just makes no sense," Park says. "We are living in a world right now, in this 21st century [in which] a dictator like Hitler can be praised. Kim Jong-un's job is oppressing people, killing people, killing his uncle, assassinating his half brother and that is perceived as a toughness and worthy of praise from the leader of the free world."

Park spoke with The World's Carol Hills about her thoughts on the summit, Trump and the current state of North Korea.

Carol Hills: Do you think that the summit in Singapore and the fact that Kim Jong-un was out on the world stage — do you think that maybe that's affected him and made him have a better approach to human rights in North Korea?

Yeonmi Park: Wow. No. North Korean human rights, it's never been this worse, this oppressed than ever before under any Kim previously. The persecution for anybody in North Korea now is so much worse than before.

So, you think that the summit in Singapore last year gave Kim Jong-un credibility that he doesn't deserve?

"Trump gave him a platform to put on a show for us to watch and Kim Jong-un is a master at brainwashing people, he's a master at manipulation and that is what he's been doing to the rest of the world too."

Absolutely. Trump gave him a platform to put on a show for us to watch, and Kim Jong-un is a master at brainwashing people. He's a master at manipulation and that is what he's been doing to the rest of the world too. North Koreans are not the only ones who are brainwashed, then being manipulated. The rest of the world is following his direction of believing this guy and believing this dictatorship, and somehow think this guy is doing the right thing.

Related: Twitter and Cocoa Puffs: The surprising life of a student at North Korea’s top university

Yeonmi, you escaped North Korea at 13 with your mother. You made it to South Korea, and now you're in New York. You've been telling your story all over the world and you've even written a memoir about it. When people ask you about your experience, what's the one thing you tell them about North Korea?

"... the media portrayed North Koreans as some brainwashed robots that have no humanity." 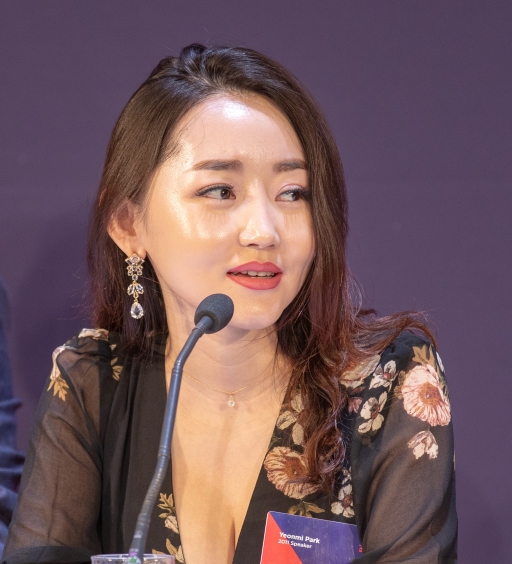 The one thing that I want to tell the world about North Korea is that the media portrayed North Koreans as some brainwashed robots that have no humanity. But I just want to tell people, the people who are living there right now — 25 million people just like us — are just so unfortunate, being punished for their birthplace.

So you want us to understand that the citizens of North Korea — they're not brainwashed robots, that they're just like you and me?

Do you still have family in North Korea?

Yeah. That's a tricky question, because as soon as I spoke out against the dictatorship, the North Korean regime portrayed my entire family and my relatives in a propaganda video denouncing me as the propaganda mission of the West. And they've all disappeared, because of me and I have no idea if they're still alive or sent to prison camp or I have no idea. And that's why we're talking about Kim Jong-un. Nothing got better under Kim Jong-un. It's getting worse.

Related: South Korean aid to North Korea could be a game changer — if North Korea accepts it

You've called on Americans to urge President Trump to bring up human rights in North Korea with Kim Jong-un. It never happened at the Singapore meeting. Do you still think it could help if an American president put pressure on Kim Jong-un?

"It's such contradictory behavior by these politicians that I do not understand. If they really care about life, how are they not caring about human rights, but just caring about nuclear weapons?"

Of course. [The US] is the most powerful country in the world. As the US president, if he acknowledged there is a human rights violation that has to be resolved, then that is signaling the entire world. The entire world will know about it, and we have to care about it. It's such contradictory behavior by these politicians that I do not understand. If they really care about life, how are they not caring about human rights, but just caring about nuclear weapons?