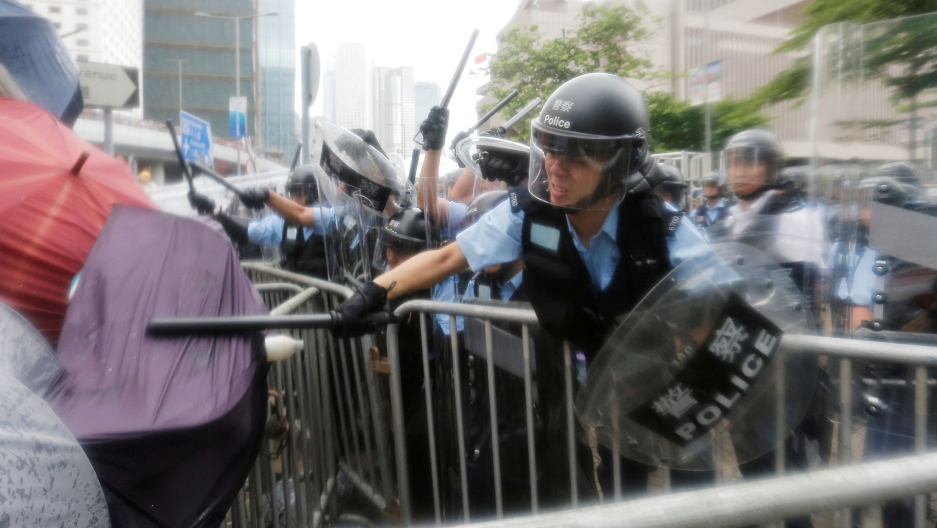 Protesters clash with riot police during a demonstration near the Legislative Council in Hong Kong, China, June 12, 2019.

It’s after sundown, but the woman in a video on Twitter is still wearing a sun hat as she shouts at Hong Kong police officers.

Holding up a mobile phone in front of her, she asks the cops if they want to send her back to China. When one of them offers her a snack because she may be tired. She refuses.

“I don’t take things from running dogs,” the woman says.

Angry auntie shout at the police. The anger runs deep in society. Cops tried to pacify her with some snacks. But she refused to take it.#AntiELAB #AntiExtraditionBill pic.twitter.com/E8U4A0LrGM

The scene was captured by Hong Kong-based photojournalist Alex Hofford. “Angry auntie shout at the police. The anger runs deep in society,” he writes.

Hong Kong protesters have been calling for the repeal of a new extradition bill that would allow mainland authorities in China to apprehend anyone in Hong Kong, including foreign visitors. The largest demonstration on Sunday saw an estimated one million people march.

But the frustration with China has been building for a long time, says Kacey Wong, a visual artist and Hong Kong native.

“Although the photographs might look strikingly similar, this time feels like an end-game compared to five years ago with the Umbrella Movement,” Wong says, referring to 2014 pro-democracy protests named for the umbrellas demonstrators used to protect themselves from tear gas.

On Wednesday, Hong Kong’s Chief Executive Carrie Lam issued her first public statements since the start of this week’s demonstrations. Lam condemned the protesters in no uncertain terms.

“Ignoring law and discipline is unacceptable for any civilized society. It’s obvious these are not peaceful rallies, but openly organized riots,” Lam said. “It’s impossible that these are actions of a loving Hong Kong.”

But Kacey Wong says it is the police who are responsible for the violence. “They’re not afraid of using violence against innocent civilians anymore,” he says. The authorities did not want to see protesters occupy parts of the central business district like they did for nearly three months in 2014.

When more than 150 years of British rule in Hong Kong ended in 1997, China agreed to preserve its unique system of governance. Hongkongers have had more freedom than mainlanders, including an independent justice system under a "one country, two systems" policy. But Lam vowed on Monday to forge ahead with legislative changes that would allow suspects to be extradited to the mainland, eroding some of that autonomy.

Wong says it is hardly a surprise that Hongkongers don’t want to live under China’s legal system.

“A lot of people don’t understand how the courts work in China. They don’t provide a fair trial,” Wong says. “They work for the police, and the police authorities work for the Communist Party.”

“After they snatch the guy, then they figure out the crime.”

When it comes time for the police to apprehend a suspect, Wong says, first the authorities grab a suspect. “After they snatch the guy, then they figure out the crime.”

Hong Kong's legal system works very differently, says Sophie Richardson of Human Rights Watch. “You’re guaranteed a right to a lawyer, and you’re actually going to get one,” she says.

Richardson says defendants in Hong Kong are presented with the evidence being used against them. They also have a right to know what they are being charged with and the right to a trial.

“It’s exactly the opposite in the mainland,” Richardson says. “The overwhelming majority of [suspects] never have a lawyer at all. They frequently have no ability to know the evidence being presented against them.”

“I think the conviction rate in the mainland is something like 98 or 99%, and I don’t think it’s because the prosecutors are that good”

“I think the conviction rate in the mainland is something like 98 or 99%, and I don’t think it’s because the prosecutors are that good,” she says.

It's not just the court system.

One by one, China has been closing off avenues for political expression in Hong Kong. And what these recent protests prove, Richardson says, is that many people there are not simply going to shrug it off.

Wong says China has inserted its control over education policy, policing, elections and press restrictions, to name a few.

Before this week, he says that many young people would have told you that they wanted to get out of Hong Kong.

“This is an escape plan with no destination. Exile and drift is the theme for Hong Kong.”

"But if you further interview them, they cannot tell you where they want to run to,” Wong says. “This is an escape plan with no destination. Exile and drift is the theme for Hong Kong.”

But, he adds, that doesn’t mean the protesters should give up.