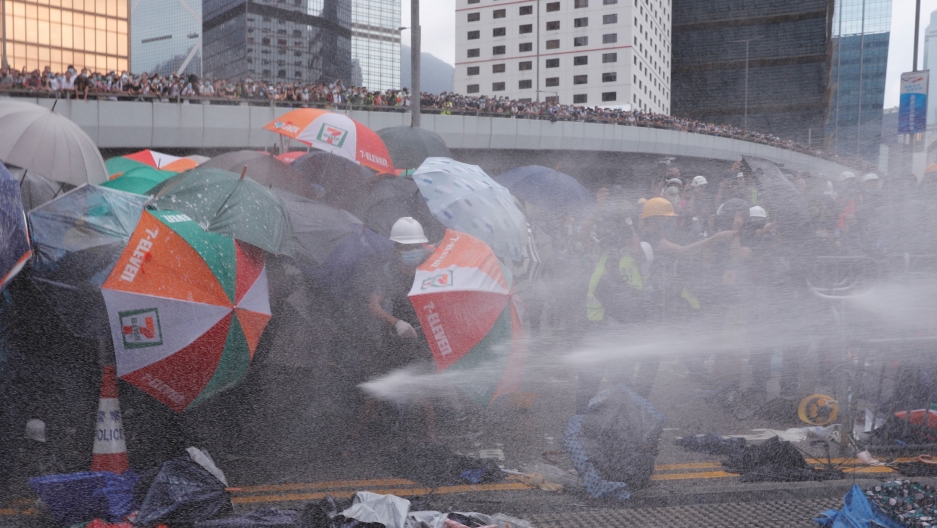 Protesters are hit by police water cannon during a demonstration against a proposed extradition bill in Hong Kong, China, June 12, 2019.

Hong Kong police fired rubber bullets and tear gas at demonstrators on Wednesday after they had initially gathered peacefully outside the Chinese-ruled city's legislature to protests against an extradition bill.

The peaceful demonstrated didn't last long as tempers flared with some protesters charging police with umbrellas.

Police warned them back, saying: "We will use force."

Ambulances sped toward the protest area as panic spread through the crowd, with many people trying to flee the stinging tear gas, according to a Reuters witness. More than 10 people were wounded in the clashes, Cable TV reported.

Police used pepper spray, tear gas and batons to force the crowds back. Some shops put up their shutters at the nearby IFC, one of Hong Kong's tallest buildings.

Civil Human Rights Front, which organized a protest on Sunday that it estimated saw more than a million people take to the streets in protest against the extradition bill, accused police of using unnecessary violence.

The protesters, most of them young people dressed in black, had erected barricades as they prepared to hunker down for an extended occupation of the area, in scenes reminiscent of pro-democracy "Occupy" protests that gridlocked the former British colony in 2014. 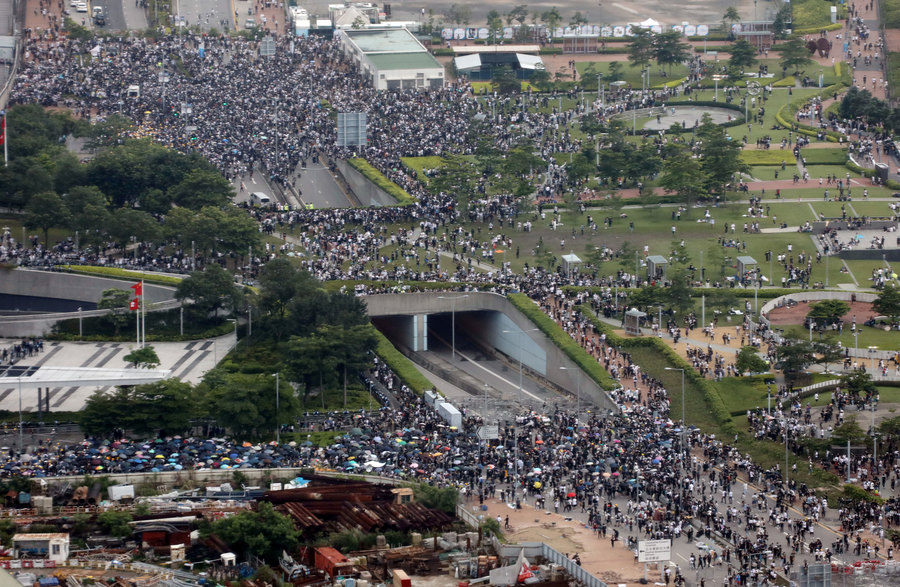 Protesters march along a road demonstrating against a proposed extradition bill in Hong Kong, China, June 12, 2019. Picture taken through a glass window.

The violence had died down by early evening under light rain, but tens of thousands still jammed the streets in and around Lung Wo Road, a main east-west artery near the offices of embattled Hong Kong Chief Executive Carrie Lam.

"Didn't we say at the end of the Umbrella movement we would be back?" pro-democracy lawmaker Claudia Mo said, referring to the name often used for the 2014 demonstrations, whose trademark was the yellow umbrella.

"Now we are back!" she said as supporters echoed her words.

Others once again called for Lam to step down.

Opposition to the bill on Sunday triggered Hong Kong's biggest political demonstration since its handover from British to Chinese rule in 1997 under a "once country, two systems" deal guaranteeing it special autonomy, including freedom of assembly, free press and independent judiciary.

But many accuse China of extensive meddling since, including obstruction of democratic reforms, interference with local elections and of being behind the disappearance of five Hong Kong-based booksellers, starting in 2015, who specialized in works critical of Chinese leaders.

Lam has vowed to press ahead with the legislation despite deep concerns in the Asian financial hub, including among business leaders, that it could undermine those freedoms and investor confidence and erode the city's competitive advantages. 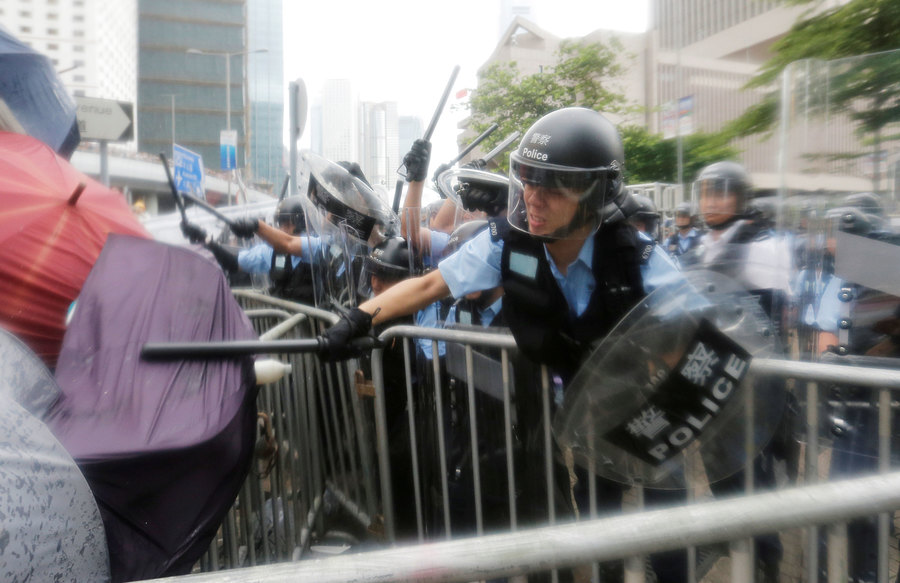 Protesters clash with riot police during a demonstration near the Legislative Council in Hong Kong, China, June 12, 2019.

In a brief evening televised address, Lam "strongly condemned" the violence and urged the city to return to normal  as soon as possible.

In a separate interview recorded earlier on Wednesday before the worst of the violence, she repeatedly stood by the introduction of the bill, and said the time was right for it to be debated.

"I have never had any guilty conscience because of this matter, I just said the initial intention of our work is still firmly right."

She added that "perhaps it is impossible to completely eliminate worry, anxiety or controversy."

The government said debate on the bill that was due to take place in the city's 70-seat Legislative Council on Wednesday would be delayed until further notice.

The legislature is controlled by a pro-Beijing majority. 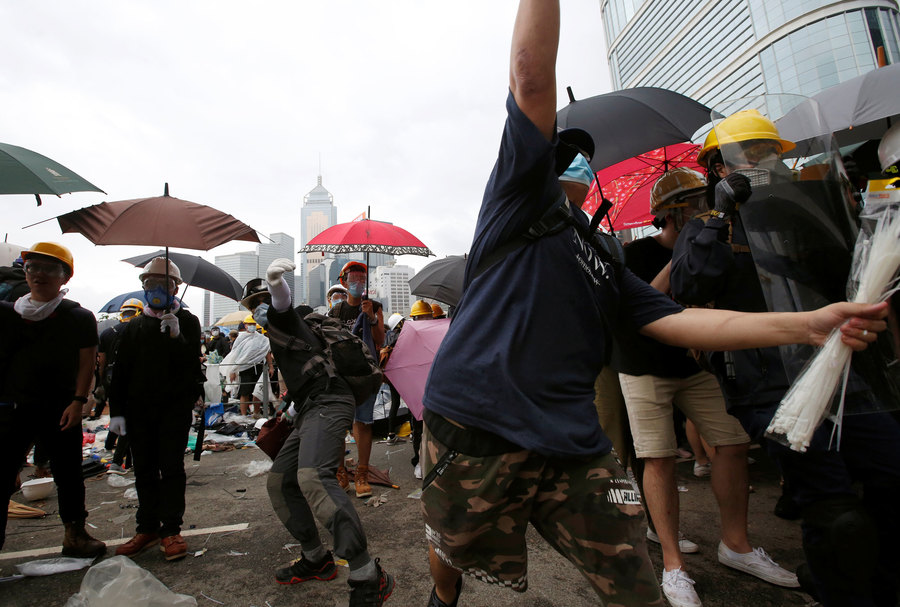 "We won't leave till they scrap the law," said one young man wearing a black mask and gloves.

"Carrie Lam has underestimated us. We won't let her get away with this."

Financial markets were hit. The benchmark Hang Seng Index closed 1.7% lower, having lost as much as 2% in the afternoon, while Chinese companies in Hong Kong ended down 1.2%.

British Prime Minister Theresa May said extradition rules in Hong Kong had to respect the rights and freedoms set out in the 1984 Sino-British agreement on Hong Kong's future.

"We are concerned about potential effects of these proposals particularly obviously given the large number of British citizens there are in Hong Kong," May told parliament.

"But it is vital that those extradition arrangements in Hong Kong are in line with the rights and freedoms that were set down in the Sino-British joint declaration."

China reiterated its support for the legislation.

Asked about rumors that more Chinese security forces were going to be sent to Hong Kong, Geng said that was "fake news."

The rally was within sight of the Hong Kong garrison of China's People's Liberation Army, whose presence in the city has been one of the most sensitive elements of the 1997 handover. 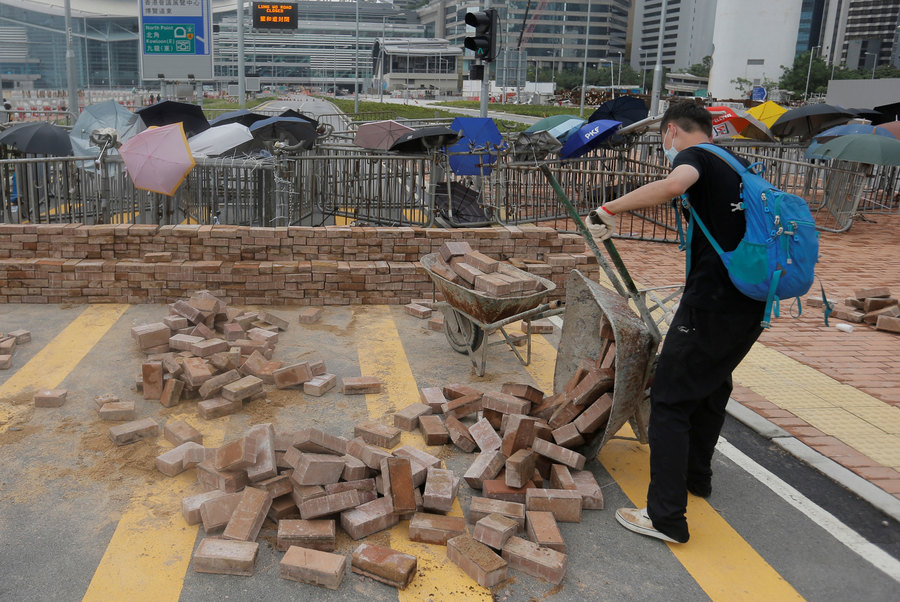 A protester gathers bricks to build a barricade during a demonstration near the Legislative Council in Hong Kong, China, June 12, 2019.

The protesters, who skipped work, school or university to join the rally, rallied just a stone's throw from the heart of the financial center, where glittering skyscrapers house the offices of some of the world's biggest companies, including HSBC.

Lam has sought to soothe public concerns about the bill and said her administration was creating additional amendments to the bill, including safeguarding human rights.

Under the proposed law, Hong Kong residents, as well as foreign and Chinese nationals living or traveling through the city, would all be at risk if they were wanted on the mainland.

The failure of the 2014 protests to wrest concessions on democracy from Beijing, coupled with the prosecutions of at least 100 mostly young protesters, initially discouraged many from returning to the streets. That changed on Sunday.

Human rights groups have repeatedly cited the alleged use of torture, arbitrary detentions, forced confessions and problems accessing lawyers in China, where courts are controlled by the Communist Party, as reasons why the Hong Kong bill should not proceed.

China denies accusations that it tramples on human rights and official media said this week "foreign forces" were trying to damage China by creating chaos over the extradition bill.

By James Pomfret and Clare Jim/Reuters