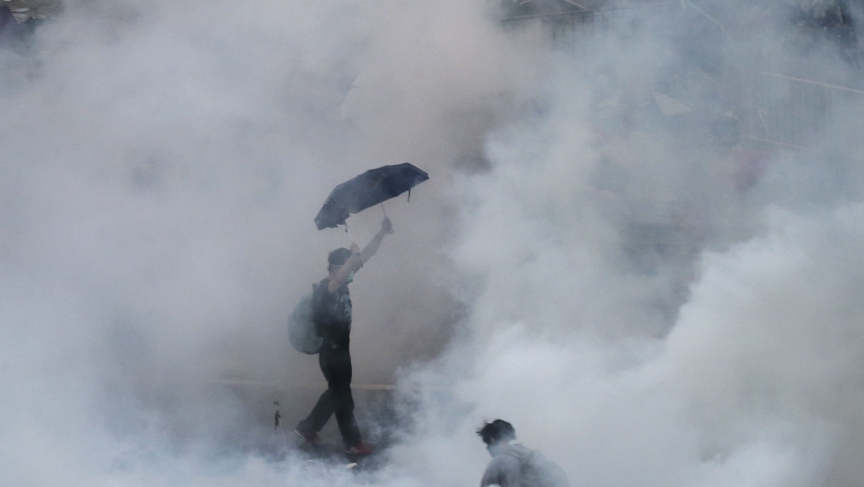 A protester walks in tear gas fired by riot policemen after thousands of protesters blocked the main street to the financial district outside government headquarters in Hong Kong on September 28, 2014.
Credit:

Police in the Chinese territory of Hong Kong are cracking down on pro-democracy protesters gathered in the center of the city, but their actions have seemingly done little to deter Hong Kongers from turning out.

On Sunday, Hong Kong police used tear gas and pepper spray to disperse thousands of activists near a government complex. Protesters responded by using umbrellas and face masks to defend themselves, prompting some people to nickname the demonstrations the "Umbrella Revolution."

The activists want the Chinese government to scrap rules requiring that candidates for chief executive in Hong Kong's 2017 election must be approved by a pro-Beijing nominating committee. They argue the current system does not amount to true democracy.

“The central government in China, at the end of August, decided not to give Hong Kong the right to elect its chief executive — that’s basically its governor,” says The World’s Matthew Bell, who is reporting from Hong Kong. That [decision] rallied the pro-democracy forces here. And especially the students.”

On Monday, tens of thousands remained on the streets, defying police orders to disperse. Unlike during previous days, officers did not respond with force as protests continued into the evening in Hong Kong.

“There are thousands of people who look like they are ready to settle in for the night,” Bell says. “They’ve got blankets, they’ve got some food, water, supplies, they’ve got goggles, and they’ve got masks … it seems pretty organized. The protesters have barricades set up around a several square block area.”

Looking like people are settling in for the night at Hong Kong's #OccupyCentral. pic.twitter.com/etw8plt2FN

Protesters have set up barricades and they occupy several blocks in Hong Kong's business district. pic.twitter.com/gsqsqIRnV3

The stand-off has attracted global attention, but China's foreign ministry has rejected any criticism of its stance, calling the unrest in Hong Kong "purely" an "internal affair." China has condemned the protests, and offered its "strong backing" to the Hong Kong government.

The use of force of this weekend is a break from the historical pattern, Bell says. China has rarely used force to disperse protesters in Hong Kong,.

“Hong Kong has a tradition of protests. For example, it’s the only place in China where the events of Tiananmen Square in 1989 — when the violent crackdown happened there — can be marked publicly," he points out. "It’s definitely a different system and there are more rights: freedom of speech, freedom of assembly, freedom of the press.”