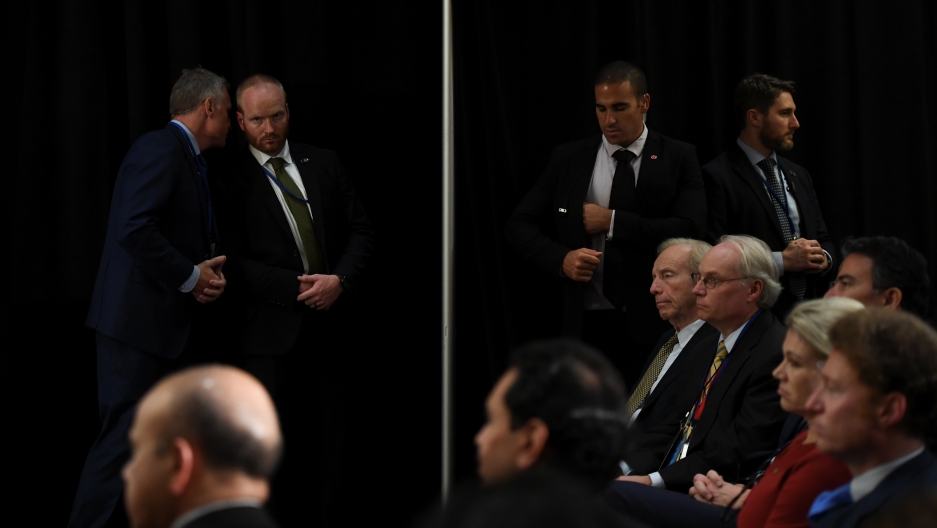 Members of US State Department security stand guard while US Secretary of State Mike Pompeo gives remarks during the United Against Nuclear Iran Summit on the sidelines of the United Nations General Assembly in New York City, September 25, 2018.

Things That Go Boom is a co-production of PRX and Inkstick Media, and is a partner of PRI's The World. This season, the podcast digs into backroom negotiations and political ploys, and asks: Is American foreign policy doing its job? Listen and subscribe to the podcast to hear the whole story.

When it comes to foreign policy — and especially the Iran nuclear deal — the Washington, DC, swamp can get pretty murky.

“It’s literally the first line of my book: US foreign policy is for sale … and it's not just for sale. It's an auction,” says Ben Freeman, director of the Foreign Influence Transparency Initiative at the Center for International Policy and author of, “The Foreign Policy Auction.”

Money in DC politics comes from just about every place one could imagine, Freeman says, from billionaires and corporations like Lockheed Martin, to foundations and foreign governments, like Saudi Arabia, China and Japan, to the US government itself.

But there is more to it than meets the eye. Think tanks with nonprofit status aren't required to disclose much of anything when it comes to the source of their funding. Though some choose to be transparent, many aren’t — and operate with an agenda.

Thousands of nonprofits around the world focus on foreign policy. Hundreds have focused just on issues relating to Iran, particularly preceding the Iran nuclear deal, when the political environment was very contentious.

Some such groups hold significant political sway, while also being extremely secretive about their funding.

“It became pretty clear early on that this one group, United Against A Nuclear Iran, was very powerful — like, they’re very loud,” says Katherine Sullivan, an investigative reporter covering money and politics for the podcast, “Trump, Inc.”

UANI, which was founded in 2008, before there was an Iran deal on the table, has the stated objective to “prevent Iran from fulfilling its ambition to become a regional superpower possessing nuclear weapons.”

During negotiations over the Iran deal, UANI was working to sway public opinion and helping write legislation. One of its most prominent activities was naming and shaming companies that do business with Iran.

Related: In nuclear negotiations, diplomacy can be a slog

“They were going on television, on news shows, as experts and talking heads. They were testifying in Congress, publishing op-eds in newspapers, and they were protesting,” Sullivan says.

Sullivan also noticed UANI had big names on its current and former leadership roster, including Florida Gov. Jeb Bush and Connecticut Sen. Joe Lieberman, along with a slew of folks from the intelligence community. 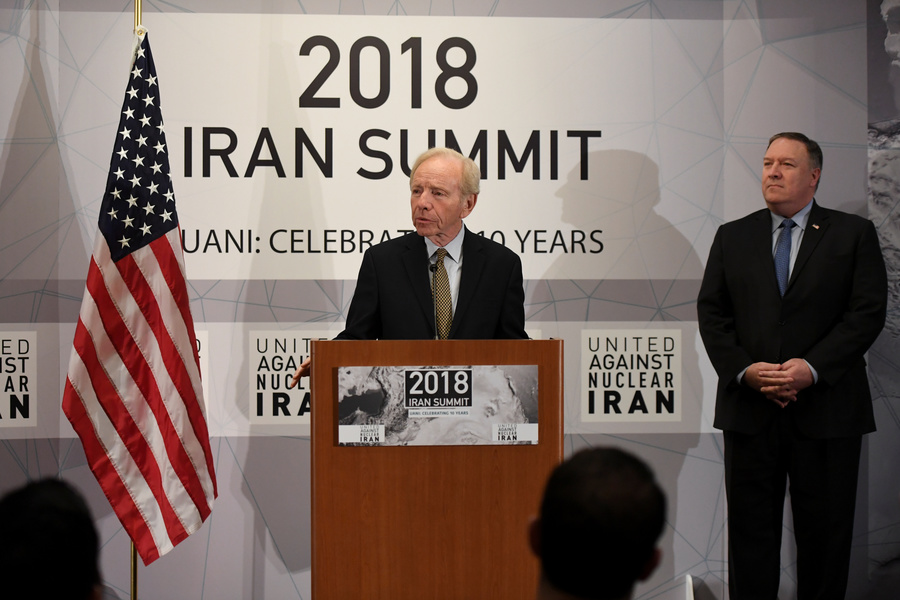 Former US Sen. Joe Lieberman introduces US Secretary of State Mike Pompeo during the United Against NuclearIran Summit on the sidelines of the United Nations General Assembly in New York City, September 25, 2018.

But there’s another reason Sullivan says UANI sparked her interest.

Eli Clifton, an investigative reporter focusing on the role of money in US foreign policy, is a fellow with the Type Media Center. Clifton has been following the story of UANI's funding for years.

“It's really a fantastic case study and maybe a microcosm of the ways in which American foreign policy is actually influenced and implemented.”

“It's really a fantastic case study and maybe a microcosm of the ways in which American foreign policy is actually influenced and implemented,” Clifton says.

In his investigative work, Clifton dug deep into UANI's roster, which was full of former diplomats and politicians.

“There was little to no explanation for why this startup organization with a rather narrow focus — based in New York, not in Washington — would have that draw to it. It didn’t make sense,” he says.

Then Clifton noticed something odd: Mark Wallace, UANI's co-founder, hadn't been paid by UANI for years. His actual salary traced back to Thomas Kaplan, a billionaire gold and silver investor.

“While Mark Wallace is leading one of the loudest Iran pressure groups in the country, he’s also working as a top executive for Thomas Kaplan at his company, called the Electrum Group,” Sullivan says.

The connection between Kaplan and UANI seemed incongruous to Clifton until he came across UANI's Schedule B form, a part of the nonprofit's tax form detailing where their money came from in 2013. 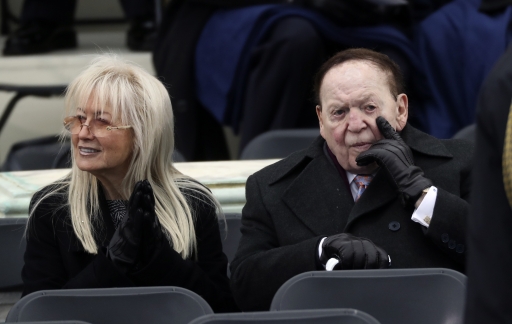 Sheldon Adelson and his wife Miriam attend the inauguration ceremonies to swear in Donald Trump as the 45th president of the United States at the US Capitol in Washington, DC, January 20, 2017.

The first major source of UANI funding listed was billionaire Sheldon Adelson, one of President Donald Trump’s top campaign donors. Adelson has been vocal against Iran, including publicly stating that the US should bomb the country. In 2013, Adelson gave UANI half a million dollars.

The next major funding sources came from two trusts connected to the Tigris Group, a financial firm controlled by Kaplan. A total of $843,000 came to UANI through these trusts, or about half of UANI’s total budget for the year.

Kaplan had been secretive about his connection to UANI, but it has raised the question of why a gold and silver investor would be interested in naming and shaming groups doing business with Iran.

One answer could be that Kaplan is ideologically committed to UANI’s mission, but others have speculated that a hard line on Iran is good for Kaplan's bottom line. Iran has used gold to get around sanctions, and there are reports of Iranians stockpiling gold, which could drive up the price of the precious metal.

An official filing for one of Kaplan’s companies, a silver mine, acknowledges that political unrest in the Middle East is a factor in the mine’s success.

UANI co-founder and former ambassador Dennis Ross says the suggestion that Kaplan, or UANI, might have something to gain from continued unrest in the Middle East, is bunk.

He says he and his original co-chair, former ambassador Richard Holbrooke, were just focused on policy.

“I don't think either one of us asked, you know, where the money was coming [from]. We weren't getting any money from it. So we were focused on the issue of the policy objectives and that was largely it,” Ross says.

Still, Ross believes more transparency would counter such questions in the first place.

“As a matter of principle, I think more transparency is better than less,” he says. “Then you don't have to deal with the aura of suspicion.” 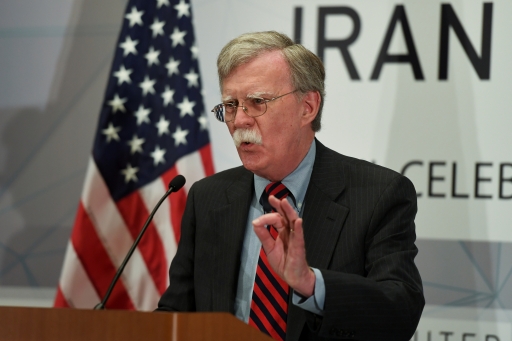 US National Security Advisor John Bolton speaks during the United Against Nuclear Iran Summit on the sidelines of the United Nations General Assembly in New York City, September 25, 2018.

As the Trump administration has backed away from the Iran deal, UANI continues to be playing an influential role. In fact, Secretary of State Mike Pompeo and national security adviser John Bolton, who is known for his hawkish stance on Iran, spoke at UANI's annual Iran Summit in 2018.

As UANI continues to advocate for greater pressure on Iran, it's still largely unclear to whom they are financially beholden.

As UANI continues to advocate for greater pressure on Iran, it's still largely unclear to whom they are financially beholden.

Freeman, the author of “The Foreign Policy Auction,” says these murky finances in influential organizations is a problem because it means the policies they produce could be tainted.

“The perception of think tanks is that they are sort of the referees in DC — that these are the folks who are providing objective analysis, and that information is not politically driven,” Freeman says. “That is the idealized view of think tanks, and it is a completely naive view of think tanks.”

"The perception of think tanks is that they are sort of the referees in DC ... it is a completely naive view ...”

Think tanks and nonprofits also receive significant funding from defense contractors and foreign governments — millions of dollars, in some cases.

“The amount that these folks are spending, it absolutely dwarfs the advocates for peace and for the folks who would like to keep us out of foreign wars,” Freeman says.

While most groups claim to be neutral — and that the money isn’t tied to any particular outcome — criticizing funders can have consequences.

“I think if I'm Lockheed Martin, and a think tank keeps disparaging the largest thing that I sell, I think I'm probably going to stop giving you money and I'll give my money to somebody that will say nice things about that thing I sell,” Freeman says.

Freeman says nearly all of the most prominent foreign-policy think tanks in Washington have accepted money from authoritarian regimes, such as Saudi Arabia. This has the ability to impact how the US behaves toward other countries, such as Iran.

“I think the system is actually rigged,” Freeman says. “It's rigged towards the money.”

This isn't the whole story on UANI and its murky connections. Subscribe to the Things That Go Boom podcast to hear how the US Justice Department stopped a case against UANI — to protect state secrets.