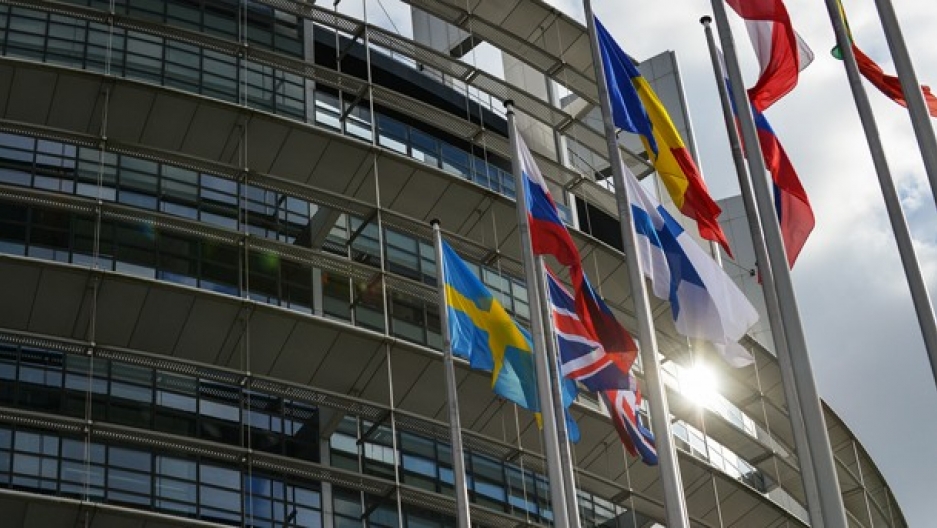 The flags of the European Union’s 28 member states fly outside the European Parliament building in Strasbourg, France.

Growing concern about climate change and increasing political fragmentation have helped usher in a new wave of Green Party members to the European Parliament.

Green Party members gained roughly 20 seats on top of the 51 they already held, and many of the new seats came at the expense of center-left seats. These wins were big and they were unexpected, says Jon Henley, a European correspondent for the Guardian.

“The big standout performance was in Germany, where the Green Party actually finished second, behind the ruling center-right conservatives of the chancellor, Angela Merkel,” Henley says. “And they beat her coalition partners, who are the big Social Democrat, center-left Party in Germany. … They basically doubled their score in Germany over the previous European Parliament elections.”

The Green Party also finished second in Finland and, most surprisingly, third in France, where the party is led by Yannick Jadot, a former Greenpeace official.

The climate crisis, which has “really shot up everybody's agenda in Europe over the last few months,” was the primary driver of the big changes, Henley says. The Friday for Future protests, inspired by Swedish high school student Greta Thunberg, "have gotten masses of young people out on the streets in towns and cities around Europe," Henley notes. And two big UN Climate reports have come out since the last election, effectively saying time is running out.

“So, people have become a lot more conscious of the whole climate debate in Europe, and they turned, logically enough, to the party that has had a very strong stance on the environment for many years now, which is the Greens,” he says.

The Green Party’s increasing level of participation in national and local governments in Europe, particularly in northwestern countries — Sweden, Germany, Denmark and the Netherlands, for example — also had an effect, Henley believes.

“They co-run 11 out of the 16 German states and they've proved themselves to be very responsible and very effective in government,” he notes. “And as one political scientist said to me the other day, when you compare the Greens, who've been in local and national government, to the kind of wackier fringes coming up on the nationalist, populist end of the spectrum, then, if you're a reasonably progressive voter, the Greens really start to look like the adults in the room.”

And finally, he adds, the Greens are benefiting from “the fragmentation of the political landscape.” The two big parties that have run most European countries since the end of the Second World War — the center-right Christian Democrat conservative parties and the center-left Social Democrat parties — are shrinking quite rapidly and losing votes to a range of smaller parties, both on the far-right, nationalist populist fringe and on the left.

Urgent climate action is at the top of the Green agenda. “They basically want deeds, not just words,” Henley says. These include things like CO2 carbon pricing, reduced aviation, and serious, green agricultural reforms. And they want all this done with an eye to social justice.

“It must be done fairly,” Henley says. “They don't want it to be the ordinary people who pay for the green transition [and] the energy transition. They want to make sure that it's corporations and the polluters, basically, who pay for the transition.”

Henley cautions that Green Party surges have happened in the past, only to fizzle over time. The last surge came after the Fukushima nuclear plant explosion in Japan in 2011. Today, however, most political scientists and other observers, looking at the strength of feeling, particularly of young people across the continent, and the urgency of the climate crisis, are confident this surge hasn’t yet reached its peak.

“There is genuine concern about the climate crisis and that concern is going to continue,” Henley concludes.