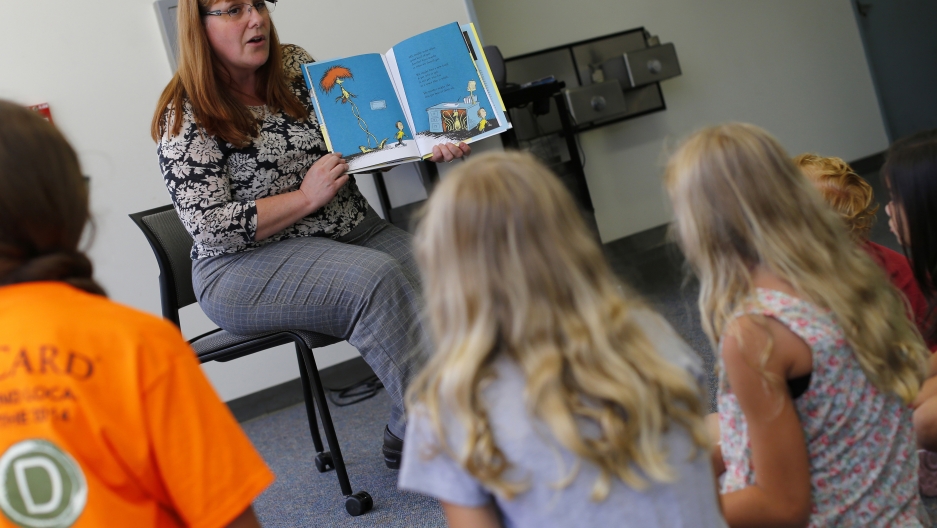 A librarian reads the Dr. Seuss book "What Pet Should I Get?" to a group of children.

Who knew a book about an anthropomorphic cat, and his tall, candy-striped hat, would become a phenomenon in the world of children’s literature? Well, it did, and it transformed a man named Theodor Seuss Geisel into a beloved household name, revolutionizing the nature of how and what children read.

But Dr. Seuss’ road to revolution was winding. He was a political cartoonist at the progressive magazine PM, an ad man, a film animator for the army and a Hollywood screenwriter. And it was during his time as an animator for the Army Signal Corps, according to Brian Jay Jones, author of “Becoming Dr. Seuss: Theodor Geisel And The Making of An American Imagination.”

Then Geisel met two people who would shape his work as an author and illustrator: Hollywood director Frank Capra and animator Chuck Jones.

Related: What you're reading: Children's books for a Global Nation

“There were a lot of enlisted soldiers who couldn’t read,” explains Jones, “and he was brought in to train them by putting together animated cartoons.” He adds, “Most of his cartoons teach by example, by showing how not to do it,” including the Private Snafu series.

Under Capra’s tutelage, Geisel learned the art of writing concisely, and through his colleague Chuck Jones — who would go on to work on the “Looney Tunes” cartoons at Warner Brothers — Geisel was introduced to the use of storyboarding, a process he would later use in writing books for children, says Brian Jay Jones.

“Take the book 'The Cat in the Hat.' Even if you look at the way it’s drawn, the cat is always in motion, his feet are very rarely on the ground from panel to panel … He’s got lessons from both Chuck Jones and Frank Capra going on in just that book,” points out Jones.

Some of Geisel’s early books for kids received a tepid response, but "The Cat in the Hat," which he published at the age of 53, was a blockbuster. The book also challenged unimaginative children’s books such as the "Dick and Jane" series which dominated classrooms at the time. With an educator-approved word list of 350 words provided by his publisher, and the request to “give me a book that a first grader can’t put down,” Geisel took well over a year to write "The Cat in the Hat." He was later challenged to write a book with 50 words, which lead to "Green Eggs and Ham."

Related: Rediscovering your favorite kids’ books as an adult

What made Dr. Seuss a trailblazer was his ability to write for young readers without condescension, which revolutionized reading and children’s literature, according to Jones.

Geisel considered kids the “toughest audience to write for,” because simple words had to convey complex ideas — while also being entertaining.

In the 1950s — just as now — parents, teachers and intellectual readers worried about kids reading less and less (or reading more and more junk). Dr. Seuss aimed to bridge the gap between adults and kids, writing books that children (and their parents) wanted to read, and still do.

This story was originally published at Innovation Hub.