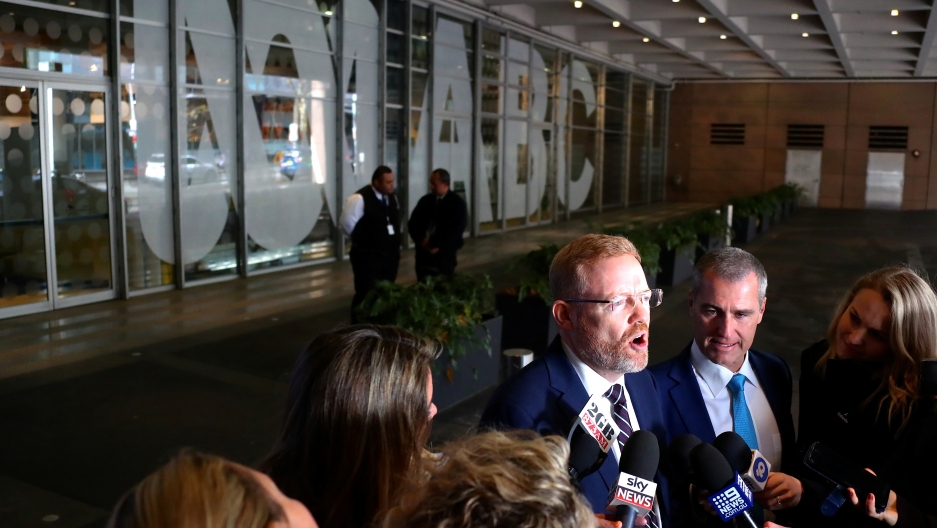 Editorial Director of the ABC Craig McMurtie speaks to members of the media outside the ABC building in Sydney.

Australian Federal Police executed a raid at the Australian Broadcasting Corporation's (ABC) offices to search thousands of documents relating to investigative stories that ABC reported in 2017 regarding alleged misconduct of Australian troops in Afghanistan. Authorities say the material was classified, and their search warrant covered thousands of documents, emails, raw footage and broadcast scripts relating to the stories.

This raid comes at a time where press freedom seems to be deteriorating around the world. A new report called "Downward Spiral" from Freedom House, which advocates for democratic policies, documents how this erosion of freedom has occurred globally. Sarah Repucci is the senior director for research and analysis at Freedom House and she spoke with Marco Werman about what this report means and how it ties to the raid in Australia.

Sarah Repucci: Unfortunately, it is common for democracies to use national security as an excuse to shut down stories that are sensitive, especially in a war situation. This move in Australia has happened in the past in other major democracies including here in the United States, even under the Obama administration. That kind of move is using our laws and, of course, national security speaks to a lot of people in order to silence a story that they felt uncomfortable with.

Marco Werman: What did you find most troubling in your findings?

I think what's most troubling is that major democracies, who used to be the ones who upheld press freedom both at home but also in the world and stood up against dictators, are now pressuring their own media at home and are not standing up for these values.

So, you're not just talking about how the White House hasn't held a press briefing in a number of weeks now, it's beyond that?

No, here in the US we're looking at things like President Trump's verbal attacks on individual journalists, or on the media as a whole, as enemies of the people. There are also threats to change our libel laws. Our protections against libel suits are some of the most robust in the world. Threats to overturn those laws would be a major change in our state of press freedom. Of course, it means something very different when the judiciary is not independent, when you can't have a fair trial, and when the laws are so repressive.

What are the consequences in nondemocratic countries or dictatorships when they see democratic governments restricting press freedom?

It's really problematic because, of course, these countries are looking to the United States — we're the most prominent democracy, also countries like Australia — as a model. Other countries can aspire to be as good as we are but they can also use our techniques as cover for much more drastic measures. For instance, if there are verbal attacks on journalists then that can turn into arrests in a country like Cambodia, where they say, "Journalists are being attacked in the United States and we're just doing the same thing."

Your report describes a correlation between the rise in populism and attacks on press freedom. What do you see as the connection?

Definitely this rise of populism that we've been seeing across the democratic world over the last few years is very closely tied to attacks on press freedom. The two institutions that populists go after the most are the media and the judiciary. In countries like Hungary, Serbia, and even India now, these right-wing populist leaders who were fairly elected are then trying to find ways to silence certain segments of the independent media so that voices that are critical of their administration are not heard.

Related: What does Assange's arrest mean for press freedom?

You actually found some reasons to be hopeful in this otherwise discouraging report titled "Downward Spiral." What are you hopeful for?

There are some individual cases where the media has had the opportunity to regrow. I think it's a sign that you can't ever fully extinguish this desire to spread information freely. In Ethiopia, Armenia, Malaysia and Ecuador in the last two years we've seen a shift in a political system that went along with a very rapid improvement in the state of press freedom. We see journalists who returned from exile and journalists who were let out of jail. We definitely can be hopeful that even where there are declines, that they can turn around and that things can get better.