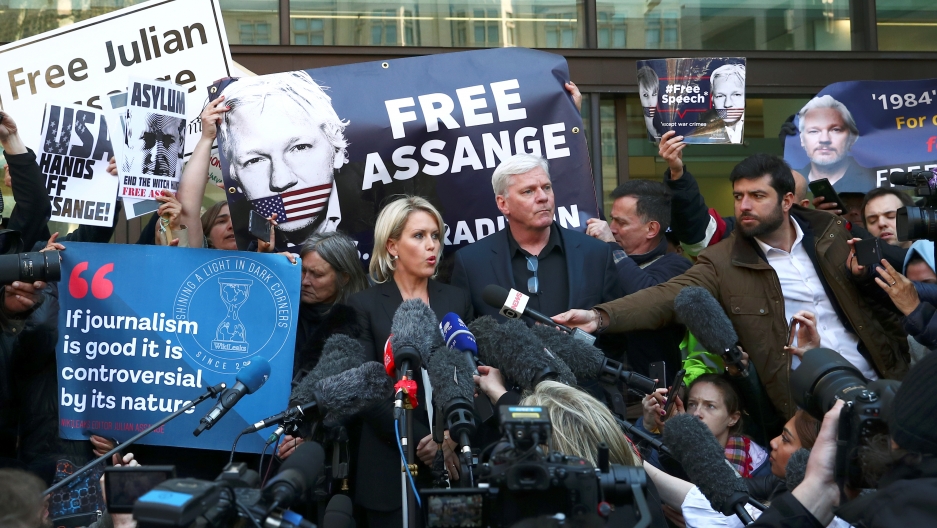 Kristinn Hrafnsson, editor in chief of Wikileaks, and barrister Jennifer Robinson talk to the media outside the Westminster Magistrates Court after WikiLeaks founder Julian Assange was arrested in London, Britain, April 11, 2019.

The arrest paves the way for his extradition to the United States, where a US court unsealed an indictment hours later charging him with one count of conspiracy to hack a classified Defense Department computer. Assange, 47, was behind a high-profile leak of classified information that, according to the indictment, stemmed from helping Chelsea Manning, a US Army intelligence analyst, crack a password to obtain classified US military and diplomatic documents. WikiLeaks published an enormous tranche of secret US military and government documents in 2010.

He is due to appear in court May 2 in the UK on the matter of his possible extradition.

Carrie Cordero, a senior fellow at the Center for a New American Security and law professor, spoke with The World’s host Marco Werman about what might happen next — and what his arrest means for news organizations publishing national security stories.

Related: A decade of WikiLeaks’ Assange, from allegations to arrest

Marco Werman: Assange has long said that he feared being handed over to the US for prosecution. Is his extradition now a slam dunk?

Carrie Cordero: It is an unusual case in that it's somebody who has been involved in the media world. But it's important to note that the charging document — the indictment that was filed in the Eastern District of Virginia, in federal court — does not charge him with any crime related to publishing classified information. The charge has to do with conspiracy to commit computer fraud and abuse. And so, although his defense will try to make this out to be a First Amendment case and try to make it appear as if he's being charged with publishing information, that's not at all what the charges are.

Why is that important that he's not charged with publishing?

It's important because it is relevant to newspapers and media organizations, for them to know that even if they are on the receiving end of classified information — which many national security journalists are involved in sometimes receiving classified information from individuals who work in governments and are in positions of trust — that they won't be prosecuted for simply publishing that information. What's different in this case — and it's the key difference — is that he's charged with actually helping Chelsea Manning, who was a Department of Defense employee, with cracking a code to be able to access Department of Defense systems. So the facts in the indictment include specific information about extra activity that he was engaged in that's not traditional media activity.

Are you thinking of the possibility of other charges down the road? What's to stop the US from charging Assange with other crimes?

Well, nothing can stop them from doing it. And I'm very curious as to whether, over time, we will see more charges brought against him not necessarily pertaining to Manning, but perhaps pertaining to other activities that Assange may have been involved in: assisting or conspiring to violate the computer fraud laws for other hacks. So, for example, the big question that many of us have on our mind is whether or not there would be any charge against him for involvement in the Russian government intelligence operation that hacked US entities during the 2016 election. There's nothing about that in his current indictment. But I'm curious as to whether there might be in the future.

Why is there not an espionage charge here?

I think that's an important judgment that was made by the Justice Department. Espionage is usually charged against somebody who is the individual in the government who is in the position of trust. So I think media organizations would be more concerned if there had been an espionage charge. It's a much cleaner case for the Justice Department to only charge him with conspiracy regarding violating the Computer Fraud and Abuse Act.

" ... there is a world of difference between legitimate journalistic enterprise when a journalist is on the receiving end of information — even if that secret information or classified information — versus being an active participant in a conspiracy to conduct criminal activity."

Another thing that's been connected to this whole story is protecting free speech and the First Amendment. Bruce Shapiro wrote in The Nation recently, “If the First Amendment means anything, it is the right to obtain public interest information from impure, indeed hopelessly tainted, sources.” When you think about that about the press freedom issues at stake here, what goes through your mind?

Certainly, that is a part of this case. The activity that is alleged took place in 2010. So there was significant debate ... throughout the Obama administration as to whether or not he could be charged with something. And so this was a significant step for the Justice Department to decide to bring these charges. But I think that's why they chose to bring a narrow charge only related to the actual hacking activity. And there is a world of difference between legitimate journalistic enterprise when a journalist is on the receiving end of information — even if that secret information or classified information — versus being an active participant in a conspiracy to conduct criminal activity.

Donald Trump spoke about WikiLeaks often with admiration dozens of times on the campaign trail in 2016. Did the positive attitude have any impact on the treatment of Assange?

Well, it's interesting — I think the president was just asked about that in the pool outside the White House recently and he demurred and decided not to comment on feelings that he may have had about WikiLeaks certainly throughout the 2016 campaign. And so, he had a long track record that certainly was making concerning statements from the perspective of those of us who worked in the national security community. Clearly, it looks like this indictment that was brought in the extradition process is something that was handled by the Justice Department and law enforcement completely separate from any influence from the White House. And that's how it should be.