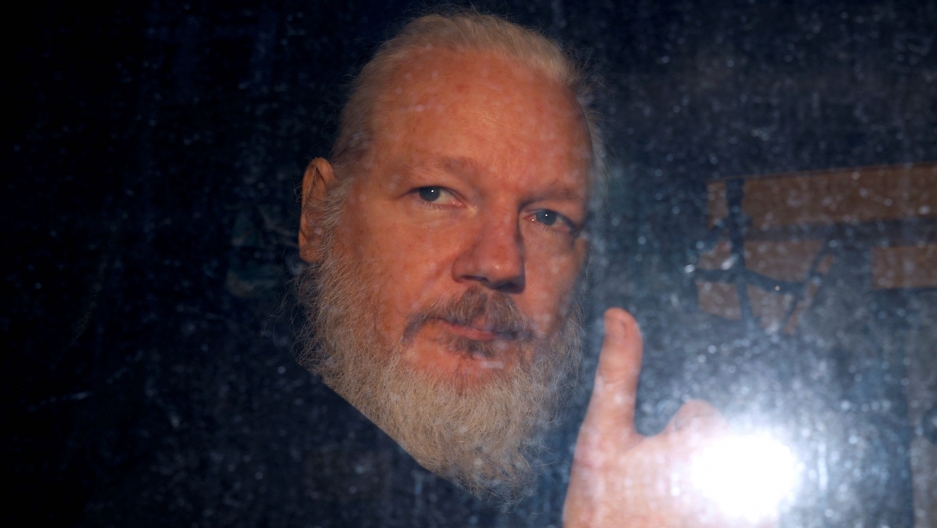 WikiLeaks founder Julian Assange is seen as he leaves a police station in London, April 11, 2019.

British police dragged WikiLeaks founder Julian Assange out of the Ecuadorian Embassy on Thursday after his seven-year asylum was revoked, paving the way for his extradition to the United States for one of the biggest-ever leaks of classified information.

Police said they had arrested Assange, 47, after they were invited into the embassy following the Ecuadorian government's withdrawal of asylum. Just hours later, US prosecutors said they had charged Assange with conspiracy in trying to access a classified US government computer with former US Army intelligence analyst Chelsea Manning in 2010.

Related: The must-read pieces of the Roger Stone indictment

The United States alleged Julian Assange engaged in a conspiracy with Manning, who served seven years in military prison for leaking classified data, and charged Assange with conspiracy to commit computer intrusion with a maximum penalty of five years in prison.

On Nov. 18 of that same year, Sweden issued an international arrest order against Assange for questioning in a rape case.

Assange was arrested on the Swedish warrant on Dec. 7; nine days later he was granted conditional bail after supporters raised $313,264 (240,000 British pounds) for his release.

Assange had appealed his extradition to Sweden on human rights grounds, but on Nov. 2, a judge denied that extraditing Assange to Sweden would be a violation of his human rights.

According to The Daily Beast, “Assange had good reason for choosing Ecuador as his protector. ... The interview revealed Correa as a Wikileaks fan, and the interplay between the two was filled with the friendly banter of fellow travelers.”

Assange entered the Ecuadorian Embassy on June 19 and requested political asylum; at the same time, Scotland Yard announced that Assange was subject to arrest for breaching bail.  Ecuador granted him asylum at the embassy on Aug. 16, where he would remain for nearly seven years.

After years of inquiries and interviews, Swedish authorities on May 19 abruptly ended the investigation into the allegations of rape against Assange.

On April 11, Ecuadorian President Lenín Moreno released a three-minute video statement, saying his government was terminating the asylum protections the country had granted Assange in 2012 due to Assange’s “discourteous and aggressive behavior.” Moreno went on to say that the founder of WikiLeaks violated an agreement not to meddle in the internal affairs of other countries while staying at the embassy.

Assange was arrested at the embassy in London later that day.

Here's footage of Assange being removed from the Ecuadorian embassy this morning & bundled into the back of a @metpoliceuk van. He looked very pale & was shouting "the UK must resist." Footage via Ruptly live stream. pic.twitter.com/tqnieW8o6s