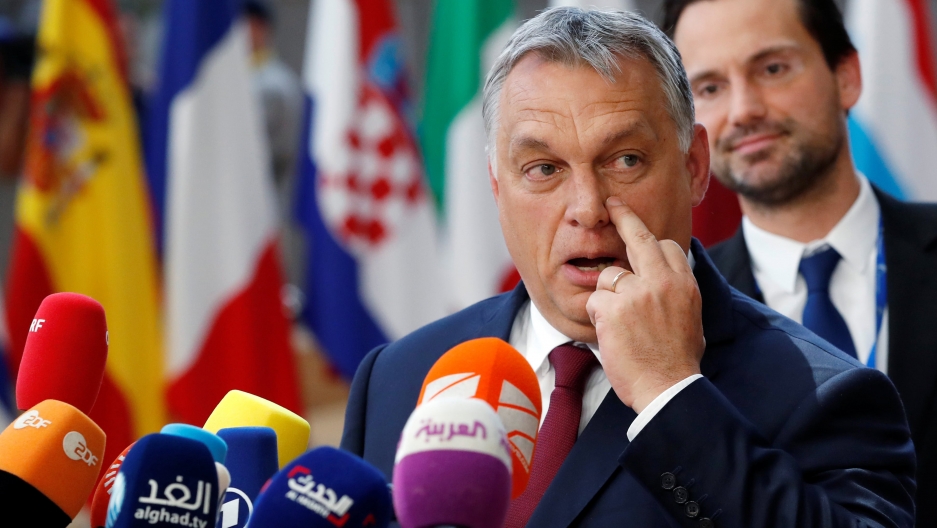 Hungarian Prime Minister Viktor Orbán talks with the media as he arrives at an European Union leaders summit in Brussels, Belgium, June 28, 2018.

Prime Minister Viktor Orban’s domination of media in Hungary is a concern for not just the young European democracy, but for the rest of Europe and the world.

The country currently ranks 73rd out of 180 countries on the Press Freedom Index, a ranking developed by Reporters Without Borders. It's dropped 50 places since Orbán took power in 2010.

Independent media outlets do exist, but find themselves often struggling to find funding and advertising dollars.

In 2018, the European Parliament voted for the first time to trigger Article 7 against Hungary, calling the country a “systematic threat” to democracy and the rule of law. The vote just missed the required two-thirds majority to pass.

The World's Marco Werman spoke with Kim Lane Scheppele, a professor of sociology and foreign affairs at Princeton University and expert on Hungary, for some greater context.

Marco Werman: András Petho, co-founder of Hungarian investigative news site Direkt 36 and former reporter, suggested to The World's Orla Barry that independent media in Hungary might have a chance to survive if it turns to the public for support. Do you think that's a real possibility?

Kim Lane Scheppele: First of all, it's not so clear to me that there are enough Hungarians to support the kind of news gathering that they need. And second of all, the government of Hungary has really turned into a police state. They can surveil everything everyone does and everyone knows it. So, if you start giving money to government-critical news media, the next thing you know, they might come after you.

So when you say not enough Hungarians would be able to support that, we're talking paying for news, right?

Paying for news. Absolutely. So one of the problems is that the Orbán government has been so tough on the kind of audience that would want independent news, that many, many people have left the country. One recent estimate said that out of the 10 million people in Hungary, something like 1 million have left since 2007.

Now, it's really hard to know because a lot of people have one foot there, one foot out. But for people who speak languages and who travel, the Hungarian media isn't really where they're getting their news from. And so that group isn't so likely to support the independent media in Hungary. And for the people who are stuck in the country and who are living solely in the Hungarian language space, it's very difficult for that group to actually support independent news as well. Now, it's happening. It's happening much more than I thought it would, but when you have a situation where the government is just blanketing the country with its own version of the news, having these other versions also then starts to look somewhat suspicious.

Secretary of State Mike Pompeo was in Budapest yesterday. Did he address any of these concerns about the media and democracy there?

Well, it used to be the case that when high-level government officials from the US would go to Hungary, this was on the top of their list of things to raise. But under the Trump administration, Secretary Pompeo has been much more interested in the foreign relations of other countries than in their domestic affairs. So Mr. Pompeo met with some people from the civil sector in Hungary. This was not a high-profile part of his visit and his public comments didn't really focus on it. And in fact, whenever someone from the US government is asked about the internal affairs of any country they usually say something like, "it's none of our business." And I think that was very much Pompeo's message yesterday.

You've studied Hungary for 30 years. What do you find most fascinating about the country?

I always want to say it's a country of geniuses and that it's a beautiful place and the culture is very rich, very deep. The people are amazing.

But what I find really depressing is that what we're seeing now, is the re-emergence of so many structures that look exactly like the kinds of structures of control that were present in the communist time. Many of my friends who lived through the '70s and the '80s before the wall came down say that Hungary is worse off now than it was then, and they've lived through both times, so they have a way of understanding it. And this is at a moment when Hungary is touted as a member of the European Union, a member of NATO, one of the democracies in something called the Community of Democracies, and yet it's fallen so quickly.

It's not because Hungarians have never gotten over communism, it's because they've literally been captured by an autocrat who knows how to get elected and then change the laws to make it impossible for anyone to ever get him out of power. And it's a new kind of model about how autocrats operate now. And I don't think the world has yet figured out how to rein these guys in.