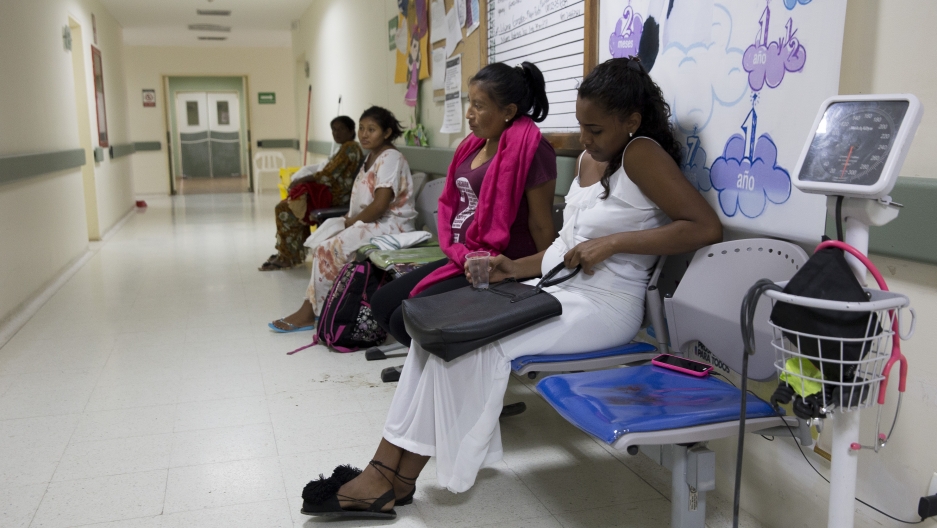 Women wait for care in the maternal ward of Hospital San José, a public hospital in the border city of Maicao, Colombia, on May 5, 2019.

When 19-year-old Emily Semplu was about to give birth to her first child, she knew it was time to leave Venezuela.

The day before she went into labor, she fled to neighboring Colombia by night through trochas, illegal dirt pathways along the border run by dangerous armed groups. The next morning, she was alone, writhing and drenched in sweat at Hospital San José, the only public hospital in the northern border city of Maicao, Colombia.

“I’m here because there [in Venezuela], you can’t get anything,” she said. “If you give birth there, you have to buy everything for them to take care of you.”

As her doctor implored her to push, Semplu’s hands locked around the side of her bed and she bit down on the faded blue rag crammed in her mouth. 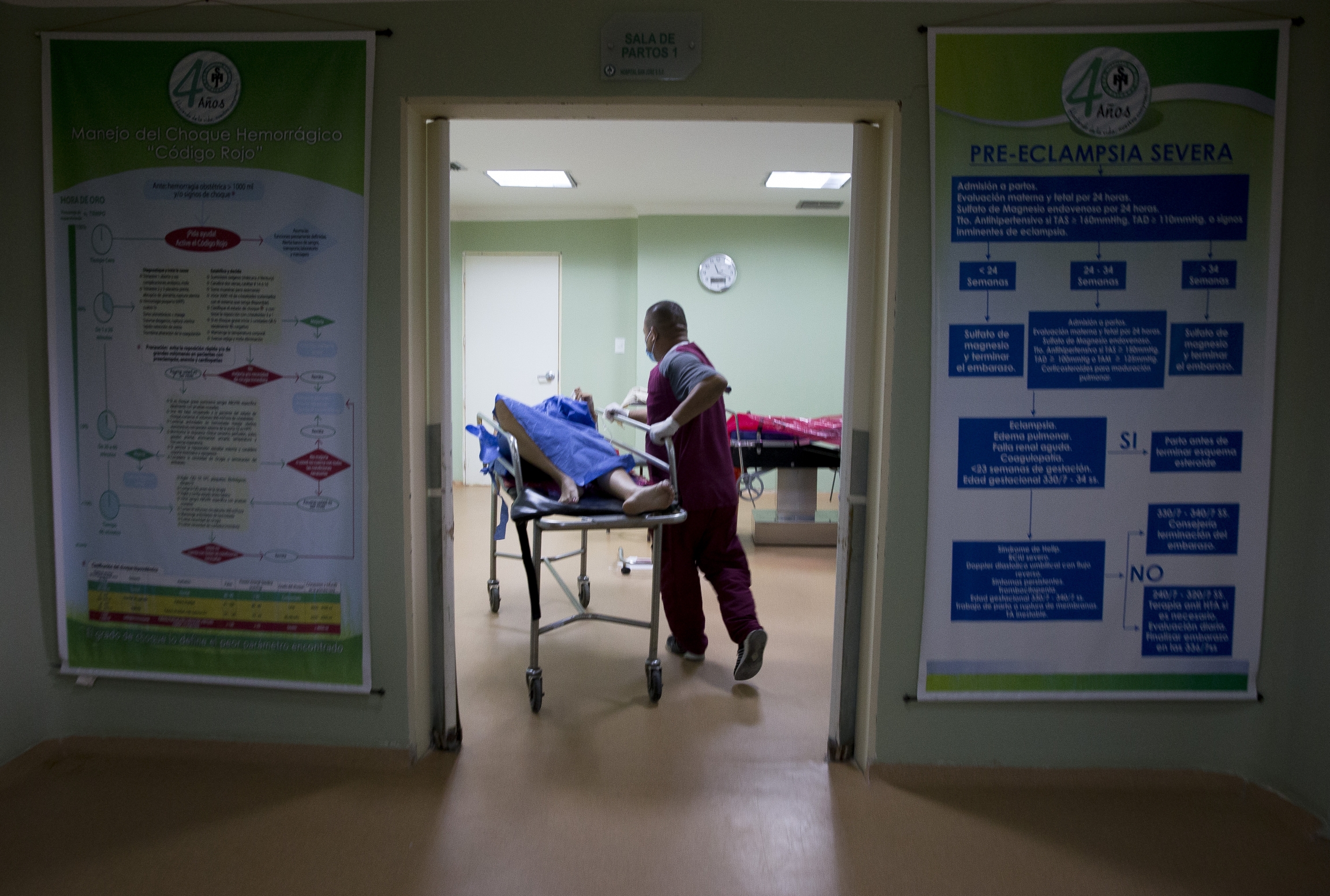 A nurse runs Venezuelan migrant Emily Semplu into a birthing room in Hospital San José the northern border city of Maicao, Colombia, on May 5, 2019.

Without an epidural available and sparse medical supplies, it was all Semplu could do to stop herself from biting her tongue or screaming.

Semplu is one of a growing mass of Venezuelans streaming into Colombia for health services as Venezuela’s health system collapses from the economic crisis and devastating blackouts. Over 3.4 million migrants have fled to neighboring countries since 2015. 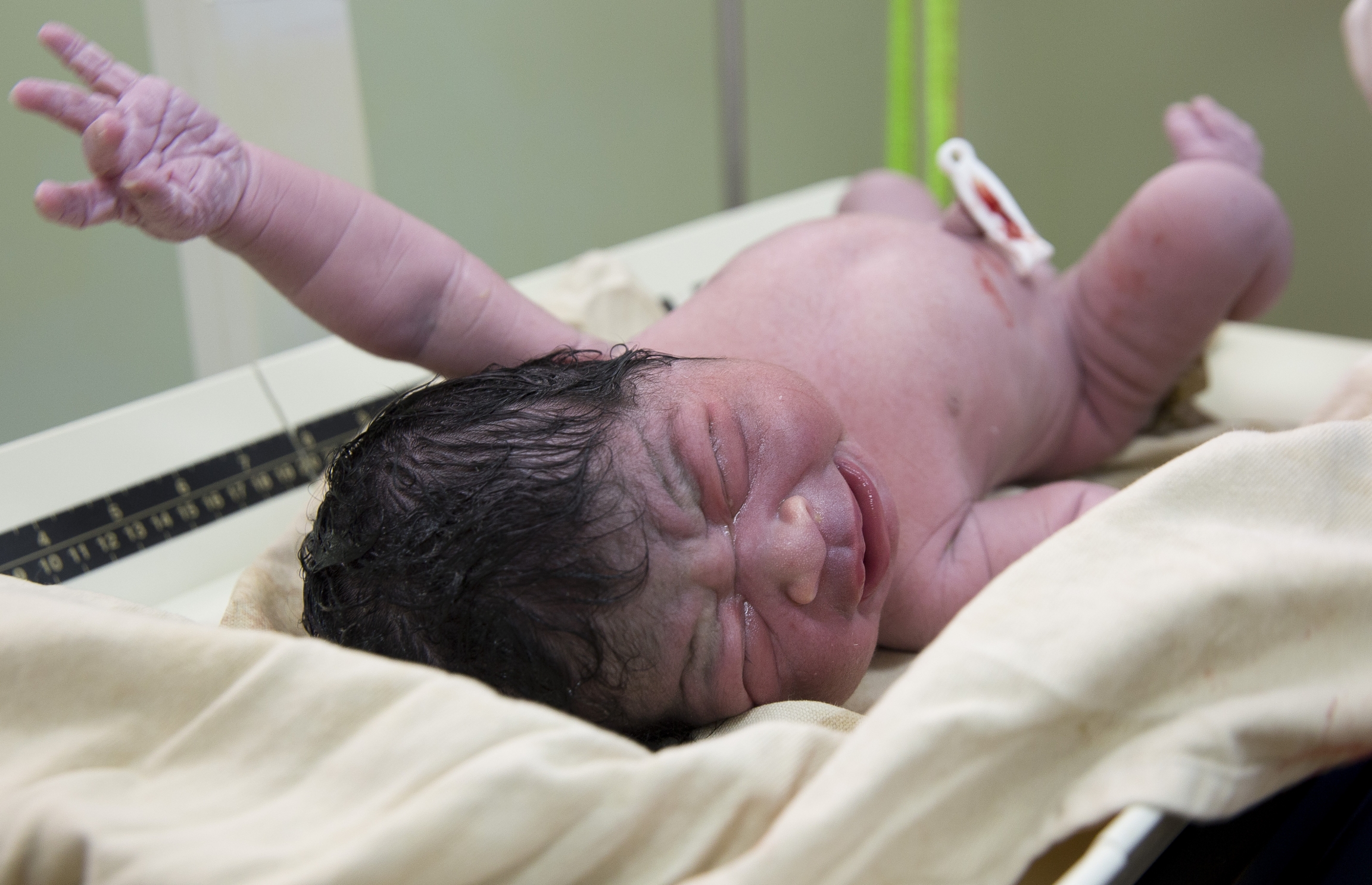 A nurse weighs a baby recently born to Venezuelan mother Emily Semplu in Maicao, Colombia on May 5, 2019. The mother crossed through illegal pathways along the Colombia-Venezuela border called trochas the night before so she could give birth in Colombia.

Colombia — a country that has received more Venezuelan migrants than any other — remains startlingly unprepared to take on that mass migration.

The city of Maicao, once a trade hub, lies in the La Guajira desert of northern Colombia and is home to the Wayuu people. The area, which already suffers from poverty, is also one of the hardest hit by Venezuela’s migrant crisis. Today, entire migrant families live on the streets under the blazing sun. The number of Venezuelans who appear at Hospital San José suffering from infectious diseases, malnutrition and violent injuries has surged in the last year alone.

Overall mortality rates in Maicao are on course to more than double, possibly triple, in 2019 from the previous year, according to Maicao’s Secretary of Health office. If the crisis continues to deepen, health officials say they’re headed for a “collapse of the general health system,” which could happen as early as October.

“The hospitals are turning into cemeteries of the migrant population. ...More complex cases that we aren't prepared to attend to arrive every day.”

“The hospitals are turning into cemeteries of the migrant population,” said Carlos Sánchez, assistant director of Hospital San José. “More complex cases that we aren't prepared to attend to arrive every day.”

When Venezuela began its free fall in 2015 and 2016, migrants arriving to Maicao were young and healthy, seeking basic care like vaccines. But that changed in the coming years, especially in 2019, with country-wide blackouts all but devastated Venezuela’s failing health system.

“This most recent group of immigrants right now don't arrive with the flu, with pain, with diarrhea,” Sánchez said. “They arrive with cancer, with chronic kidney disease, with HIV, and always with high-risk pregnancies.”

Leonardo Pérez, a Venezuelan obstetric gynecologist working both in his country and on the Colombian border, said he’s watched Venezuela’s medical system crumble, often having to deliver babies without light or life-saving medical equipment.

“The situation there [in Venezuela] is very critical. ... They lack supplies, they lack personnel, who have immigrated because of the same crisis. … In hospitals, the operating rooms aren't working, intensive units aren't working.”

“The situation there [in Venezuela] is very critical,” he said. “They lack supplies, they lack personnel, who have immigrated because of the same crisis. … In hospitals, the operating rooms aren't working, intensive units aren't working.” 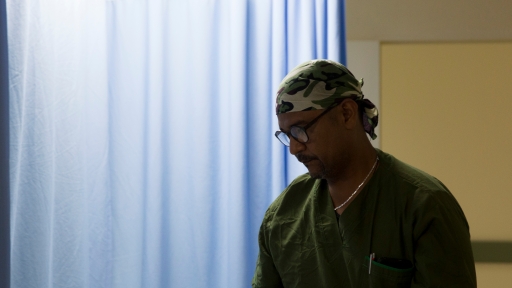 Venezuelan doctor Leonardo Pérez prepares for a delivery on May 5, 2019. Pérez spends half of his time in Colombia and half in Venezuela, struggling to combat a deepening health crisis.

Crises have emerged across Venezuela’s borders. Brazil suffers from outbreaks in measles and diphtheria and other parts of the Colombian border have seen similar surges in maternal mortalities and infectious diseases.

But in Maicao, the situation has grown even more dire.

That is if the health system hasn’t collapsed by then.

Since the crisis began, the municipality has reported spikes in cases of congenital and gestational syphilis, measles, cancer, malaria, deaths from malnutrition, HIV/AIDS, tuberculosis, dengue, acute malnutrition in children under the age of five, maternal mortalities and more. In the public hospital, about half the cases they care for involve children and pregnant women.

While syphilis has been a longstanding problem, the measles outbreak is only just emerging and worsening, Salom said. In 2019, they’ve had 18 confirmed cases of measles and seven suspected cases.

That situation worsens month-to-month. With ongoing power struggles between Venezuelan opposition leader Juan Guaidó and President Nicolás Maduro deepening the conflict in Venezuela, Salom and Sánchez said they are seeing patients with more violent injuries arriving at their facilities.

“They arrive with all kinds of situations, from a birth emergency to an emergency from violence or bullets.”

“They arrive with all kinds of situations,” Salom said. “From a birth emergency to an emergency from violence or bullets.”

The small cluster of aid organizations — like the Red Cross, United Nations Children Fund, Americares and United Nations High Commissioner for Refugees, which recently set up a small migrant camp near Maicao — only offer basic health services like first aid and vaccines and can’t tend to the growing mass of serious cases arriving at their doorstep.

Instead, patients from the UNHCR camp get sent to the Hospital San José, an often-dangerous three-hour walk from the border in the scorching desert sun.

When those patients arrive, doctors often don’t have the resources to address the more extreme cases because of the unprecedented number of patients.

The camp can hold up to 350 migrants, but due to limited resources, they only accept the most vulnerable including women, children, the elderly and disabled people. Residents also face a 30-day limit, so many end up back on the streets.

“Apart from this small group of NGOs present in Maicao,” said Marco Rotunno, spokesperson for the UN refugee agency, “there is a medical services gap here in Maicao. So, we don't have third-level medical services,” or higher-complexity treatments that require more money and resources.

That was the case for 10-year-old Isabel González, a migrant from Venezuela who, in early May, laid in her hospital bed with a makeshift tourniquet and cast wrapped around her shattered knee.

In April, Isabel fell from a taxiciclo, an auto rickshaw commonly used along the border, on her way to school. Her mother rushed her to San José. When she and her mother arrived, they learned doctors had the ability to operate, but the hospital couldn’t afford the resources for the surgery that could cost up to $6,000. 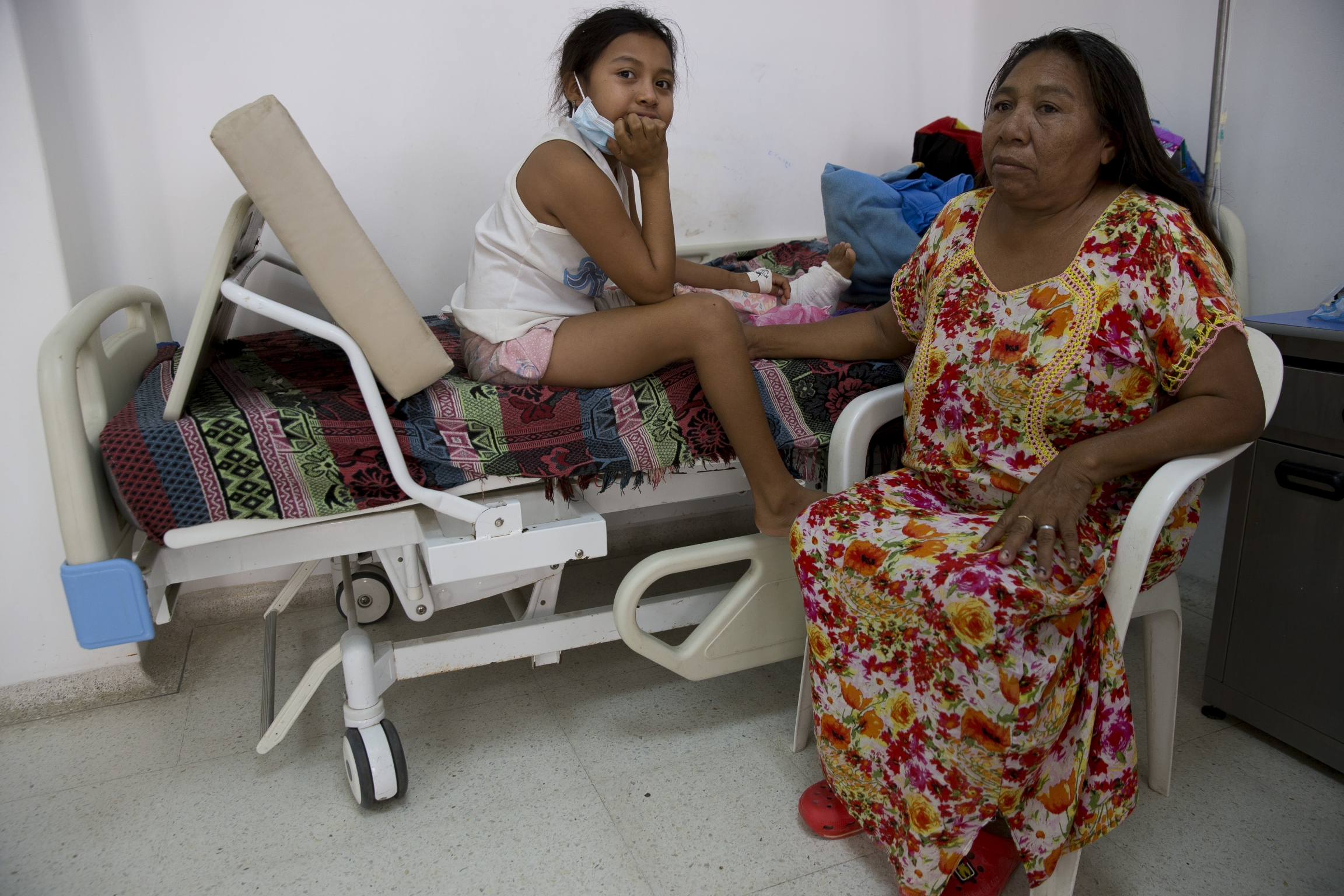 Isabel González, a 10-year-old Venezuelan migrant, poses for a portrait in Hospital San José on May 5, 2019. Isabel has lived in the public hospital on the Colombia-Venezuela border for more than a month, unable to find resources for a surgery to fix her broken knee and leg.

For more than a month, they waited in the hospital as administrators fruitlessly called NGOs for help. For them, it’s still unclear if Isabel will get the surgery she needs or ever walk again.

“I'm scared that something will happen to [her], and all I can do is pray,” said her mother, Celia Ipunna, crying at the foot of her bed. “Someone has to help her. ... If I could, I would ask God if I could take her place.”

Other situations are fatal.

In the maternity ward, sobs echoed through the hallways as one woman clutched a phone with a picture of a baby on the screen. Her pregnant niece had crossed into Colombia to give birth, but she died during the labor. The baby, however, survived. Months prior, the woman's niece had received an operation in Venezuela that, without antibiotics, had caused a deadly infection in her stomach.

“She waited five days for an intensive care unit,” said Sánchez, the assistant director. “But we couldn't offer one because we didn't have an available bed in La Guajira or other departments [in other hospitals].”

Death rates in Maicao have shot up in since January. For the entirety of 2018, the Secretary of Health’s office documented 86 deaths, while in just the first four months of 2019 they documented 65 deaths, the vast majority a result of basic public health issues.

Aid providers anticipate the crisis will worsen; they say their only hope is more aid from international or Colombian leaders, which thus far has been “insufficient.” If they don’t, more complex medical care for Venezuelan migrants streaming across the northern border could be all but eradicated.

“It's going to get worse because we're going to arrive at a moment where the public hospitals aren't going to have resources to take care of migrants or Colombians,” Sánchez said.