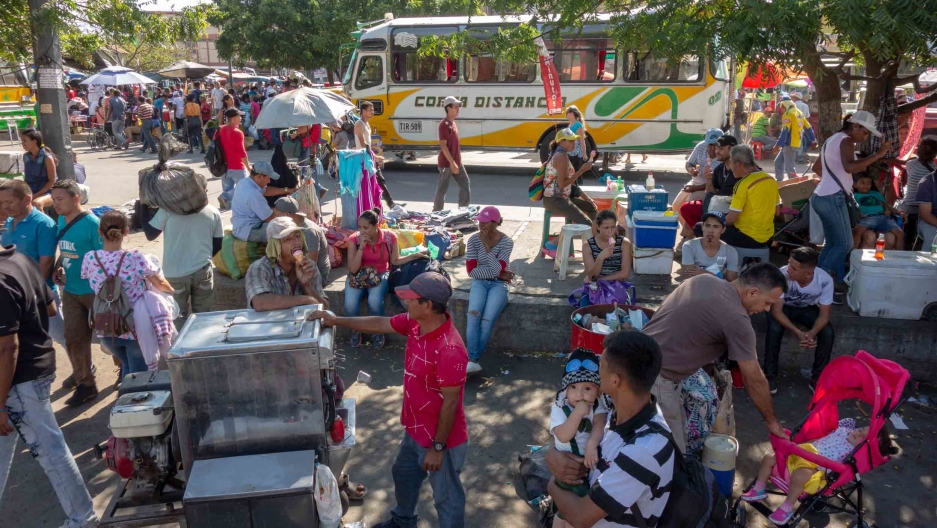 Over 40,000 Venezuelans cross into the border town of Cúcuta, Colombia, everyday, fleeing the crisis in Venezuela. Some come to purchase more affordable medicine or supplies, others linger at the border or choose to keep walking toward Bogotá, the capital. Photo taken Jan. 29, 2019, Cúcuta, Colombia.

Amidst the stream of men and women lugging cumbersome sacks and dragging trolleys loaded with basic foodstuffs, Elizabeth Quijano, 63, hobbles gingerly over Simón Bolívar bridge over the Táchira River with the aid of her walking stick.

“I hate doing this, but what else can I do?” she asks, struggling in the intensity of the equatorial sun. “If I didn’t, I would be dead.”

Despite recent spinal surgery, Quijano makes the trip from San Antonio in crisis-stricken Venezuela to Cúcuta in neighboring Colombia three times a week to receive medical care provided by the Colombian government and to purchase medicine for high blood pressure and kidney problems.

“What you find is very little, and when you find it its too expensive. ... The government is not suffering, but we the people are.”

As the economic and political crisis continues under President Nicolas Maduro, some 40,000 Venezuelans a day cross the bridge, according to officials at Colombia’s migration agency. Most come to purchase goods unavailable on the other side of the border, but many also join the ever-growing exodus to find relief of all kinds.

Three million, or 10 percent of the Venezuelan population, have now left since the crisis began four years ago, according to the UN Refugee Agency, with another 5,000 leaving each day.

Many hope that Venezuela’s opposition, led by its new, fresh-faced leader, Juan Guaidó, recognized as legitimate by the US along with most other Latin American and Western nations, can end the country’s woes. But as President Nicolas Maduro continues to hold onto power with the backing of the military and Russia, China and Turkey  — among others — conditions are deteriorating and the flow of desperate migrants is increasing.

Those numbers could reach new heights as the domestic and international dispute over Venezuela intensifies. Protests against Maduro have surged in the past few weeks in Caracas, the capital, and across the nation, but state forces have squashes these uprisings as they did in 2017 and prior years.

Venezuela has the largest oil reserves in the world but economic mismanagement and pervasive corruption have left it in financial ruin. Hospitals struggle with power cuts and often lack even basic medicines. When there is food or medicine, it is often unaffordable because of rampant hyperinflation of one million percent which renders currency almost worthless.

“What you find is very little, and when you find it its too expensive,” Quijano says. “The government is not suffering, but we the people are.” 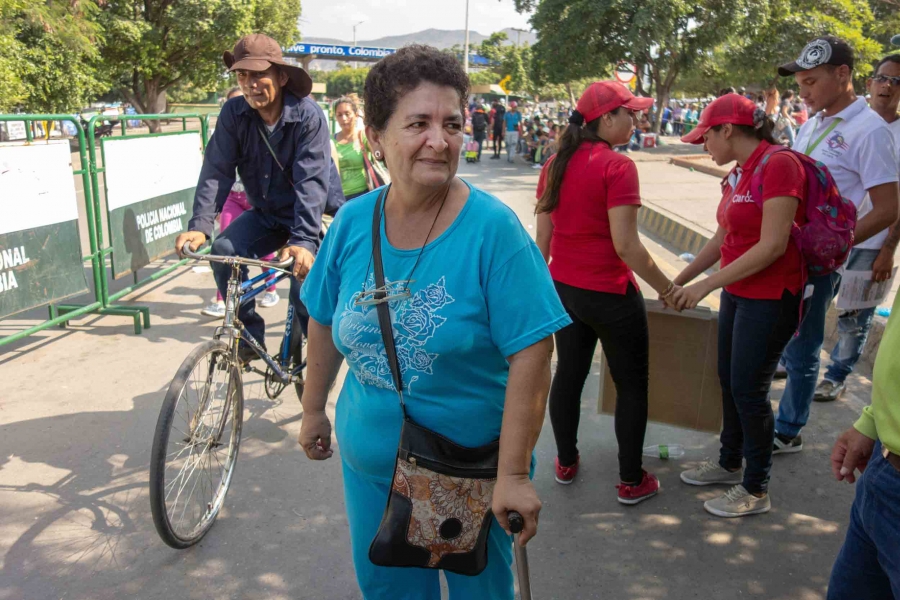 Elizabeth Quijano, 63, hobbles gingerly over Simón Bolívar bridge with the aid of her walking stick. Despite recent spinal surgery, Quijano makes the trip from San Antonio, Venezuela, to Cúcuta in neighboring Colombia, three times a week to receive medical care provided by the Colombian government and to purchase medicine for high blood pressure and kidney problems. Photo taken on Jan. 29, 2019 in Cùcuta, Colombia.

In Cúcuta, a leafy commercial hub dotted with shiny new hotels, restaurants and shopping malls, a parallel economy thrives off the desperation: Hawkers tout bus tickets and medicine or shout cabello (hair), which migrants sell to local wigmakers in order to buy food and accommodation. Others survive by carting heavy bags of rice and flour across the border on trolleys for change; some have to sell their bodies in order to eat.

A few blocks from the chaos of the bridge, Carolina Cobos, 32, sits at a plastic table in a converted car park finishing off a plate of rice, lentils and bread. Alongside her in the church-run La Casa de Paso soup kitchen is her cousin, Marilee Benitez, 24, and her 11-year-old daughter, Rosemary.

A month ago, they left the city of Maracaibo in northwestern Venezuela for Cúcuta, where Carolina now sells snacks. Her earnings allow her to buy food, send a little money home to her husband and son, and save for a bus ticket for the 14-hour journey to Colombia’s capital, Bogotá, a popular destination for migrants.

This is the second of the two meals a day they are grateful to receive. 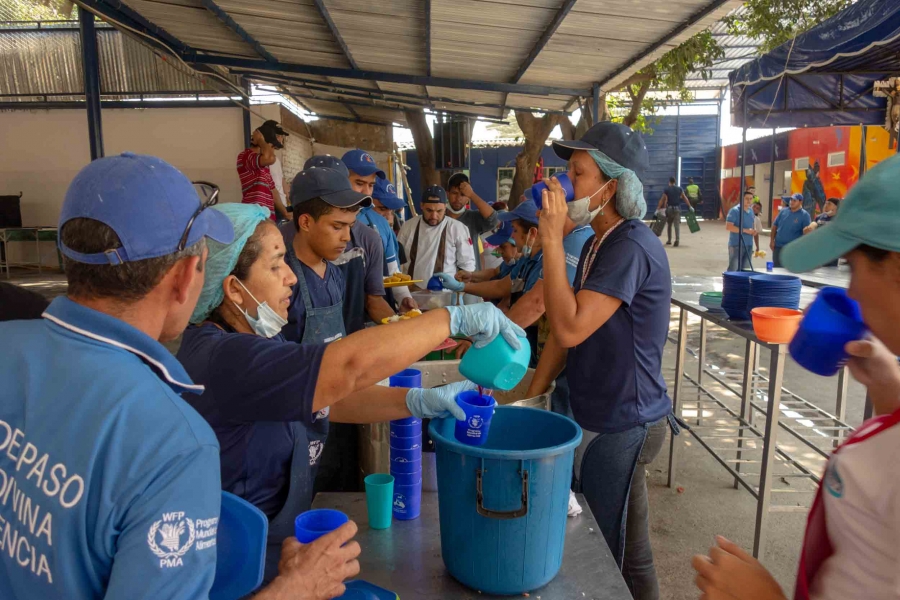 La Casa de Paso soup kitchen in Cúcuta, Colombia, was founded two years ago to serve food to 150, but as the crisis has reached new heights, volunteers feed 3,500 people a day — and the numbers are growing. Photo taken on Jan. 29, 2019 in Cùcuta, Colombia.

“In Venezuela there is nothing. Here, it’s hard to feed three mouths, but this means I am able to save the little money I need,” she says, glancing across at her daughter. “We are blessed.”

Cobos laments breaking up the family and not knowing when she can return home, but had to leave when her children had not studied for a year due to teachers’ strike over wages.

“I just want to be with my grandad and my brother,” says 11-year-old Rosemary.

Many of the visitors to La Casa de Paso are families who were forced to flee Venezuela but struggle to make ends meet across the border. Some pay two to three dollars a night for a room shared with 20 people, says Fabiola Ruiz, coordinator at the soup kitchen. Others sleep in the street.

The kitchen was founded two years ago to serve food to 150, but as the crisis has reached new heights it now feeds 3,500 people a day — and the number is growing.

“You see the distress of the people, many who arrive the first time crying, starving of hunger, not knowing what to do and without a penny in their pocket. ... It’s a situation that does not stop and every day gets worse.”

“You see the distress of the people, many who arrive the first time crying, starving of hunger, not knowing what to do and without a penny in their pocket,” she says. “It’s a situation that does not stop and every day gets worse.”

Those who eat there could be considered fortunate. As the lunchtime slot finishes, a queue forms outside for those who could not make it in time and beg for leftover bread to be passed through a hatch in the door.

“I had to work all morning to pay for our room,” Miguel, 29, says desperately, clutching his 2-year-old daughter in his arms. “My little girl hasn’t eaten.”

‘Worse before it gets better’

The Colombian government’s response to the migration crisis is an “example for the world,” says Trisha Bury, deputy director of the International Rescue Committee in Cúcuta.

Officials have largely attempted to incorporate as many of the one million Venezuelans who have fled to Colombia as possible into the economy. Passports are no longer required on entry on account of shortages in Venezuela and general visa requirements have been relaxed.

An attempt to seal off 1,400 miles of porous border on which armed gangs such as the ELN, a Colombian guerrilla group, profit from trafficking drugs — and now migrants — would likely be futile.

Bury hopes international attention on Venezuela will help secure new funds for nongovernmental organizations, but there is already “a huge gap in the response,” and political unrest in Venezuela will likely exacerbate the suffering.

“I see it getting worse before it gets better,” she says.

Most concerning is the growing number of those who cannot afford bus fare or do not have the necessary documentation and instead trek a grueling 370 miles from Cúcuta to Bogotá on a route with the presence of armed groups born out of Colombia’s armed conflict and where the cold of the Andes can be fatal.

Last month, 700 a week were taking the route; now it is closer to 1,200 a day, Bury says. It also attracts the most vulnerable. Of the women walking, over a third are pregnant or carrying newborns, Bury told The World.

Those numbers could reach new heights as civil unrest in Venezuela intensifies and conditions worsen.

Meanwhile, the power struggle over the OPEC nation continues with no peaceful solution yet in sight. International pressure mounts against Maduro and anti-government protests have surged in the past few weeks in Caracas, as well as nation-wide, but Maduro clings to power thanks to the loyalty of state forces.

Some fleeing the crisis now believe the only way out for Venezuela is brute force. 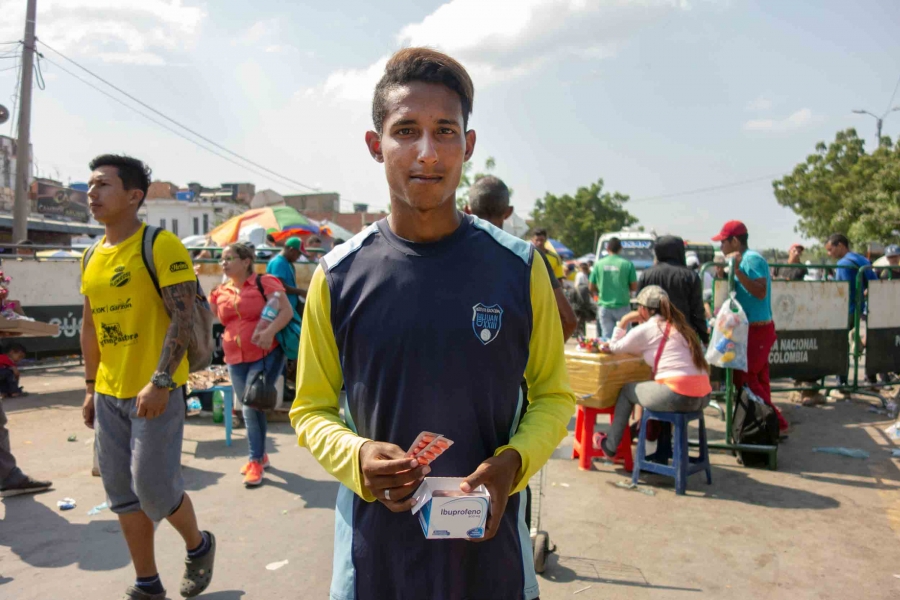 “Nobody wants Maduro, but all the time he doesn’t leave the country or the position he is usurping there will not be peace or a chance of a way forward,” says Jhon Gonzalez, a 22-year-old who left his college in the Venezuelan city of Valencia last week and now sells Ibuprofen tablets on the bridge wearing his school’s sports jersey to earn six dollars a day. “Military intervention is the only option left: Maduro does not want to leave and we have already tried all peaceful means.”

Others fear a civil war or US intervention would cause too much pain for those who have already suffered enough.