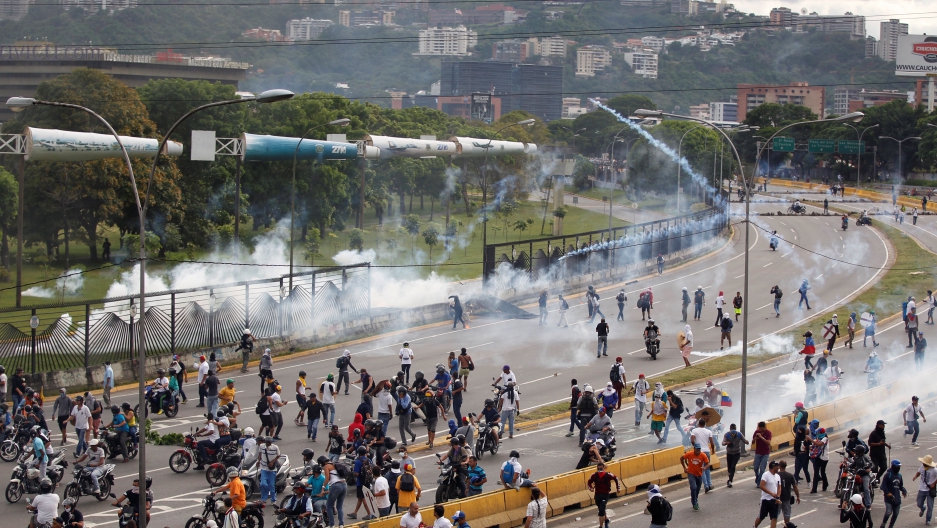 Demonstrators run from tear gas after they broke a fence surrounding an air force base during a rally against Venezuela's President Nicolas Maduro in Caracas, Venezuela, on May 1, 2017.

Venezuelan President Nicolas Maduro called for a new constitution Monday as he fights to quell a crisis that has led to more than a month of protests against him and deadly street violence.

The opposition immediately rejected the idea because the body drafting the new charter would not be the result of a popular election but rather be composed of workers and farmers.

Maduro's announcement, to thousands of supporters in Caracas marking May Day, came as security forces sprayed tear gas and water cannon at anti-government demonstrators elsewhere in the capital.

It was likely to sharpen international concerns over Venezuela's adherence to democracy and fears it was slipping over a precipice to civil conflict.

The opposition slammed the tactic as a "coup d'etat" and urged protesters to "block the streets" from Tuesday. It said it was organizing a "megaprotest" for Wednesday.

"People, into the streets! You must disobey such lunacy!" opposition leader Henrique Capriles said on Twitter.

The leader of the opposition-held Congress, Julio Borges, said, "What Maduro is proposing in his desperation is that Venezuela never again manages to have direct, free and democratic voting."

Maduro said he was invoking his power to create a 500-member constituent assembly representing a "working class base" and local councils to rewrite the constitution — cutting out the Congress.

The decree was needed to "block the fascist coup" he said threatened the country, repeating terms portraying his Socialist government as the victim of a US-led capitalist conspiracy.

Maduro's move mirrored that of his late Socialist predecessor Hugo Chavez, who in 1999 had a 131-member Constituent Assembly of various representatives draw up Venezuela's current constitution. The text was overwhelmingly passed by a referendum.

Back then, though, the charismatic Chavez enjoyed enthusiastic public support. Maduro, in contrast, is disapproved of by seven in 10 Venezuelans according to pollsters Venebarometro.

Political analyst Nicmer Evans said that with his new proposal Maduro is "playing for time at all cost, in order to stay in power."

"The pro-Chavez movement is convening the only kind of election it can win by manipulating the way voting is held," said Eugenio Martinez, an analyst who specializes in elections.

Anti-Maduro antipathy was evident on the streets Monday. Riot police officers clashed with hundreds of protesters, some throwing stones, who tried to break through security barriers to the electoral council headquarters.

Opposition leaders have vowed no letup in their protests demanding early elections to get rid of Maduro, whose term ends late next year.

They blame him for an economic crisis that has caused shortages of food and medicine.

A lawmaker was injured in the head in Caracas, photographs published online by his supporters showed. Similar protests took place in other towns across the country.

"I am out fighting for Maduro to go. This is a dictatorship in disguise," said Matilde Rodriguez, 67, from the working class Petare district of Caracas.

"Venezuela is in intensive care. There is no food, and they'll kill you for a pair of shoes."

Analysts say street rallies are one of the few means the opposition has left of pressuring Maduro.

The president's demand for a new constitution was a way of running out the clock on demands for elections, they said.

"Maduro is gaining time at the expense of everybody, including by stomping on the roadmap left by Chavez himself," said Socialist-leaning Nicmer Evans.

"This constituent assembly Maduro wants is a clear betrayal of Chavez and the people."

The violence and political spiral in Venezuela is increasingly unsettling other countries and regional blocs.

Pope Francis has offered to have the Vatican mediate, but was rebuffed by the opposition, which walked away from a previous attempt at dialogue in December when the government did not free political prisoners or set early elections as demanded.

Maduro initially voiced support for the pope's offer. But on Monday, he said the only response to dialogue was the constituent assembly he was setting up.

The president has rejected opposition calls for general elections before his term ends.

He had said he was willing to hold regional polls postponed in December, but electoral authorities did not set a date.

The president has bristled at what he calls international interference in his country's affairs.

Venezuela last week said it was quitting the Organization of American States after it and other international bodies expressed concern about the country's adherence to democracy.

Another regional bloc, the Community of Latin American and Caribbean States is to hold an extraordinary meeting on Venezuela in El Salvador on Tuesday.