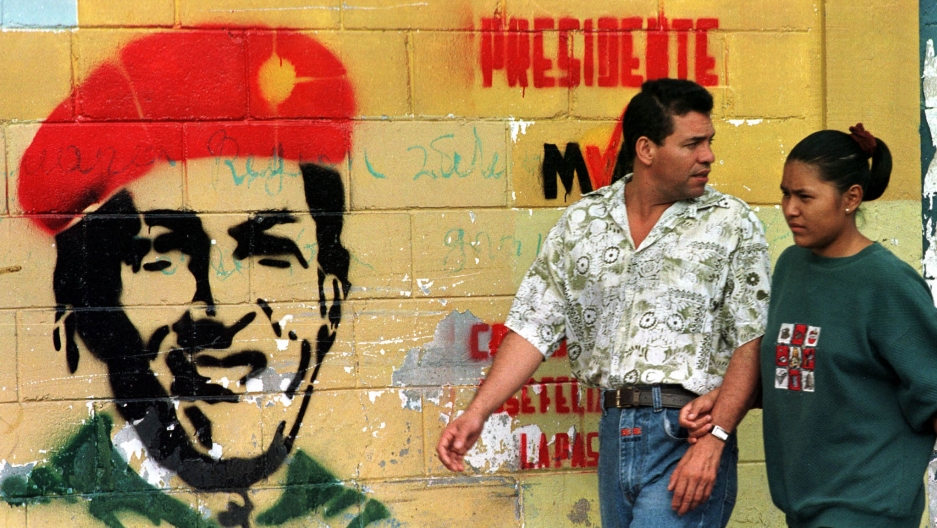 Venezuelans walk past a wall painted with the face of then presidential candidate Hugo Chávez. The leftist military leader tapped into a wave of discontent in the country with falling living standards and corrupt public institutions, December 1998.

In 1989, Caracas exploded into protests, riots and looting. Somewhere between an estimated few hundred to 3,000 people were killed, mostly at the hands of a brutal crackdown by government security forces.

“It was a surprise to all of us,” said Francisco Rodríguez, chief economist with Torino Economics, who was a college student at the time in Caracas.

“The Venezuela in which I grew up was a very confident nation. And it trusted its democracy, and it valued its democratic system. We all thought that this was a very stable system. It had been a democracy since 1958, so during the period of the 1970s where almost all of Latin America was in military dictatorship, Venezuelan democracy had survived.”

And so, Venezuela, with the world’s largest oil reserves, hummed along.

“[Until] the price of oil collapses significantly in the 1980s, so there’s not a lot of money to go around,” said Javier Corrales, a political scientist at Amherst College in Massachusetts, who also did research in Venezuela in the 1990s.

When oil prices plummeted, Venezuela was suddenly deep in debt. To get assistance from the International Monetary Fund, the country’s leaders pursued neoliberal, market-oriented solutions — the government cut back on social programs, eliminated price controls on gas and other consumer goods, and privatized state-owned companies. It was all done to try and make the economy run more efficiently.

“One theory is that the medicine that was applied was the wrong medicine. So, you make the patient worse,” said Corrales. “An alternative argument is that they didn’t have enough time to apply the medicine.”

When the government cut subsidies for gas, the cost to ride the bus immediately rose 30 percent, and people quickly took to the streets in 1989.

Venezuela’s government also overvalued its currency exchange rate for a prolonged period. Basically, it made the Venezuelan bolívar artificially strong.

This benefited Venezuela’s rich. It allowed them to cheaply buy US dollars and set up foreign bank accounts to shield themselves from higher inflation or economic crisis back home. The result: A lot of capital left Venezuela.

There was an additional reason to prop up the Venezuelan bolívar: to give the currency more spending power abroad.

Yes, a strong currency allowed Venezuelans to buy cheap imports, but it also stifled domestic growth. If you can import cars or sofas for less than building them at home, there’s no economic incentive to develop your own industry.

“The big mistake was not diversifying the economy and being so dependent and so reliant on the petroleum sector. That’s virtually the only thing that Venezuela produces.”

“The big mistake was not diversifying the economy and being so dependent and so reliant on the petroleum sector. That’s virtually the only thing that Venezuela produces,” said Michael Shifter, president of the Inter-American Dialogue, a think tank in Washington.

So, you have an economy almost entirely dependent on oil, plunging oil prices and failing economic policies, which also led to runaway inflation in the late 1980s. On top of all that, corruption in Venezuela was rampant.

“Everything, everybody,” said Shifter. “The system was that they would take off the top of these huge profits. They would not distribute that to public funds and public spending, but would be used for private use.” 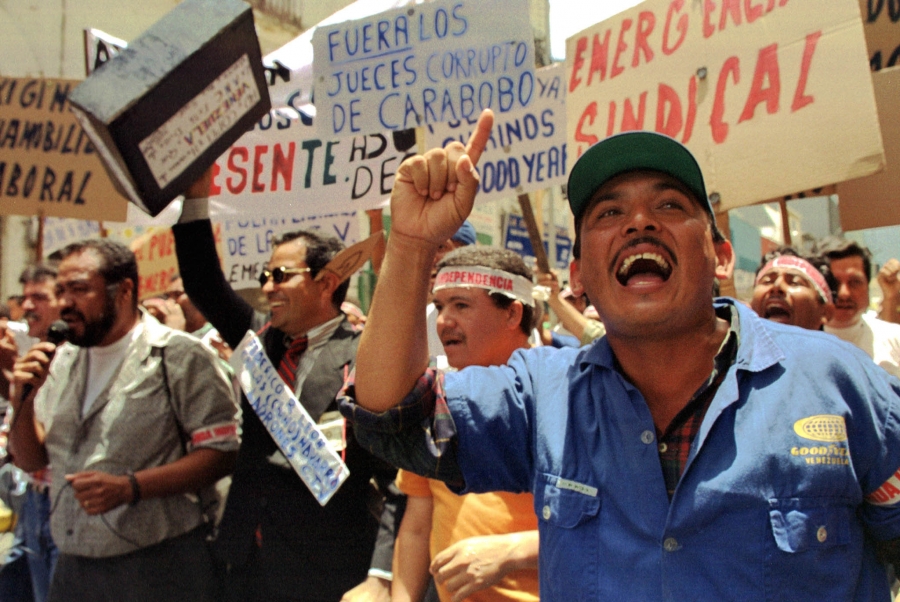 Protesters shout out for the end of political and economic corruption in front of the Venezuelan Congress, September 1999.

“There was a desire for change and especially for the poor. They wanted a voice. And Chávez, I think, very effectively tapped into that desire.”

“It would’ve been much wiser, in retrospect, to have had more attention on targeted social policies in the 1990s,” Shifter said. “There was a desire for change and especially for the poor. They wanted a voice. And Chávez, I think, very effectively tapped into that desire.”

Chávez was a leftist who appealed to Venezuela’s poor and successfully ran for president in 1998. At the time, Chávez was a young, charismatic military man, a third party candidate running within a historically two-party system.

As president, Chávez also ran Venezuela’s economy almost entirely on oil, but he benefited from higher prices. Chávez invested a lot of the profits into social programs to help the poor, and many Venezuelans loved him for it. But there was a lot of cronyism and inept management within his administration.

Chávez died in office in 2013 of cancer. His successor, Nicolás Maduro, stepped in and ran the economy into the ground.

“It seems like Venezuela has come full circle,” Shifter said. “The problems today are magnified —  but they’re the same kind. The corruption is monumental, the mismanagement is monumental, and so it’s interesting to reflect on the same themes being touched on by Juan Guaidó, the interim president of Venezuela, as was touched on by Hugo Chávez 20 years ago.”

And while the problems in Venezuela today are considerably worse, Shifter said there are economic lessons for whatever government comes next in Caracas.