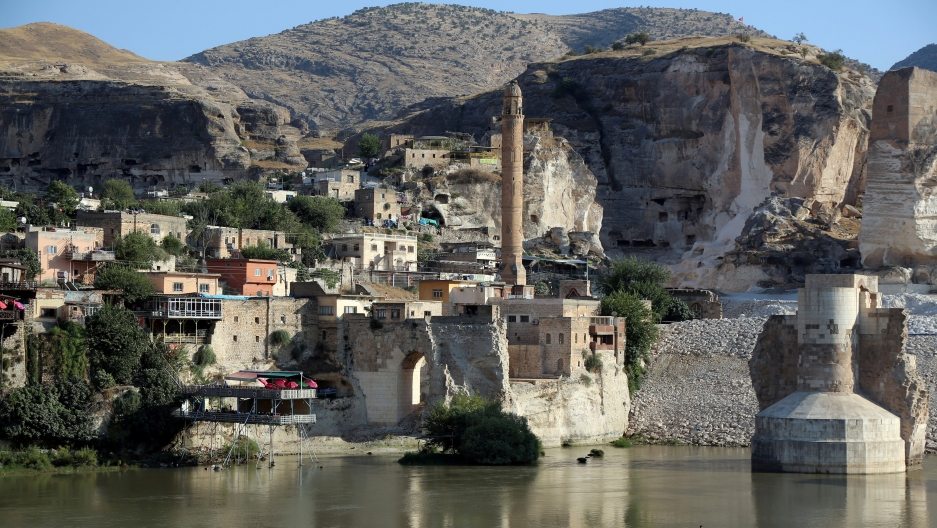 A general view of the ancient town of Hasankeyf by the Tigris river, which will nearly disappear due to the newly built Ilisu Dam, in southeastern Turkey, Aug. 26, 2018.

The town of Hasankeyf, Turkey, will soon be only a memory.

From her front door, Fatima Salkan has a sweeping view of the fruit trees, historic ruins and tidy stone compounds that run along this stretch of the Tigris River in southeastern Turkey. She tries her best not to look off in the distance, to the right. The town on the horizon, still under construction, is where she will move when the valley is flooded by a downstream hydropower dam.

“Do you see all these old places?” she asks in Kurdish. “We are the owner, but today we are homeless.”

Related: 100 years after genocide, Armenians in Turkey revive their identity

High above, an old Roman fortress crowns a limestone cliff, which is dotted with the caves where her parents and grandparents once lived. The valley below, emerald-green after a recent rain, is studded with yellow wild mustard flowers and bright red poppies. At 45, Hasankeyf is the only home Salkan has ever known. A future severed from it feels like no future at all. 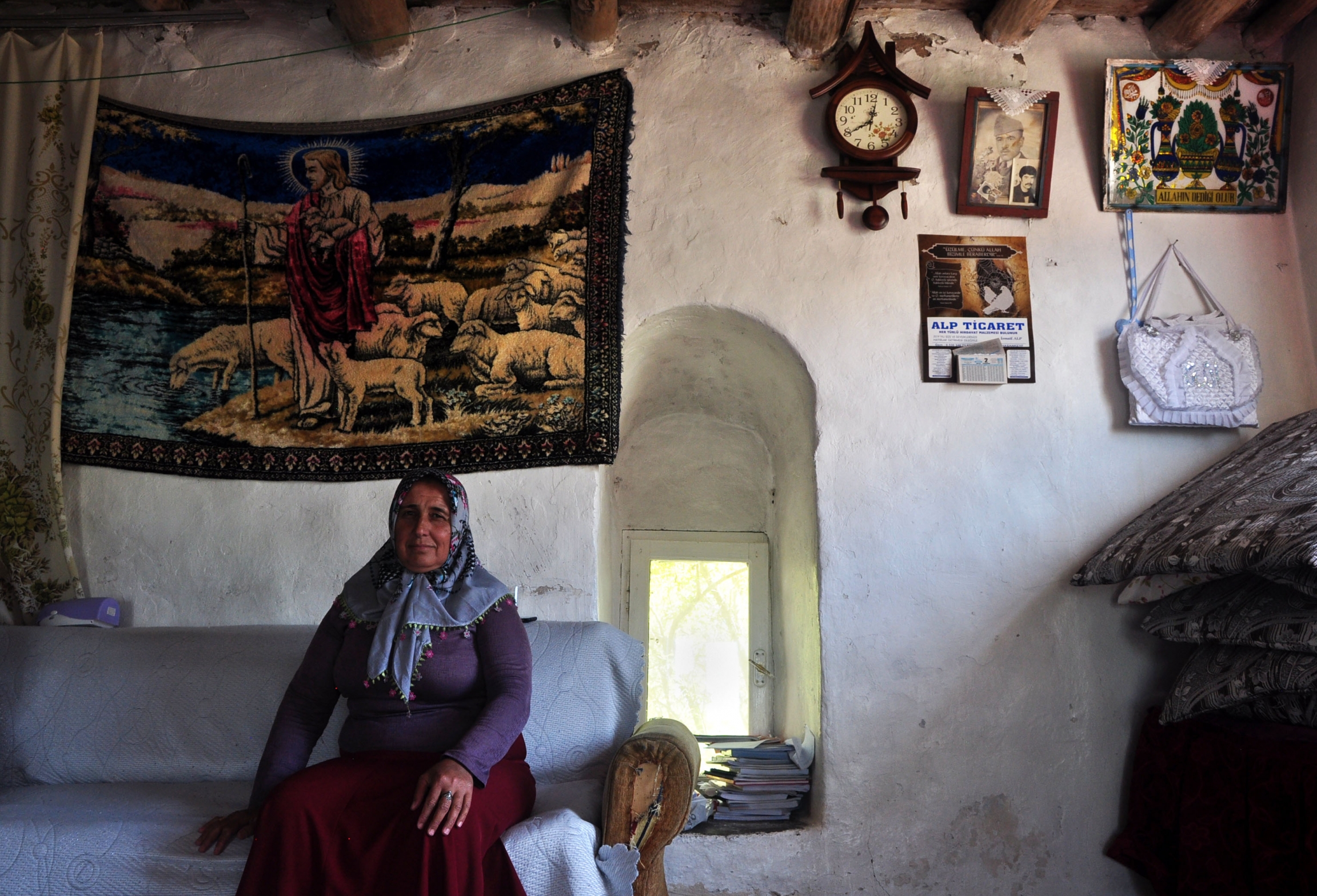 Fatima Salkan, 45, sits in the home her father built before her birth. The tapestry above her, she says, is not for religious reasons — she likes the animals.

The last generation of Hasankeyf

Archeologists believe that Hasankeyf’s history began 11,000 years ago, based on Neolithic remains found in the surrounding caves. (Thousands of caves remained inhabited until 1972.) Over the centuries, as the Tigris River became an important Silk Road thoroughfare, Hasankeyf passed through the hands of the Assyrian, Ayyubid and Ottoman Empires. In the second century, it served as a lookout for the eastern edge of the Roman Empire. In the 13th century, it was conquered by the Mongols. 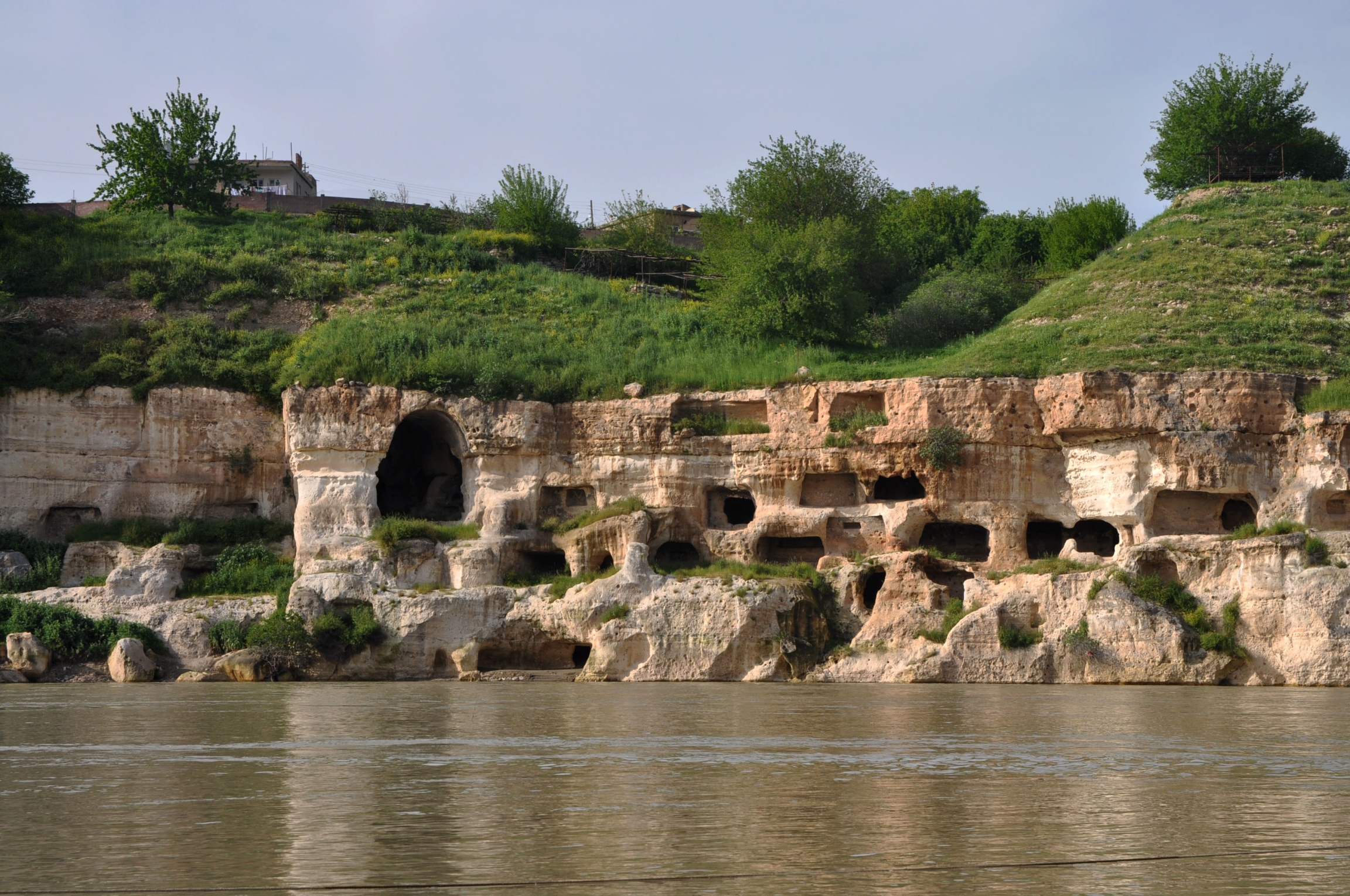 After the discovery of Neolithic remains, scientists believe the caves of Hasankeyf were settled as early as 10,000 BC. When the area is flooded, many archeological sites will be inaccessible.

Now, about 25 miles downstream, the Ilisu Dam is complete. The 6,000-foot-long, 1.2 billion euro behemoth is poised to generate 3,800-gigawatt hours of electricity annually, according to the Turkish government. When the project becomes operational — in June, officials claim — it will flood more than 115 square miles of an agricultural valley, submerging Hasankeyf and dozens of villages nearby. The very river that nourished the town for centuries will swallow it whole.

“With the Ilisu Dam, Turkey will gain great power,” Turkish president Recep Tayyip Erdoğan told a rally in a city near Hasankeyf in 2015. “This will be an important dam to satisfy our thirst.”

The Ilisu Dam is part of a network of projects known as the Southeastern Anatolia Project, or Guneydogu Anadolu Projesi (GAP) in Turkish, which the Turkish government hopes will generate electricity, irrigate and conserve water in the country’s lower-income southeast as climate change makes the region hotter and drier.

Related: Listen to an interview with geographer Aaron Wolf about Turkey's massive dam-building project on the Tigris and Euphrates rivers, as well as its efforts to address impacts both within the country and on its downstream neighbors, Syria and Iraq.

Environmentalists, however, came out firmly against the dam, voicing deep concern that the delicate ecosystem of the Tigris River basin — where some of the world’s earliest civilizations developed — will be disrupted forever. Downstream in Syria and Iraq, officials raised concerns that the dam would cut off part of their water supply, despite international agreements meant to regulate the flow of the Tigris. Turkey delayed filling the reservoir last year during a severe drought.

When Western investors pulled out of the project in 2008, the Turkish government charged on, deciding to come up with the funds themselves. A final, last-ditch effort to stop the dam with a lawsuit in the European Court of Human Rights was rejected this spring on the grounds that the protection of an individual’s cultural heritage is not a universal right.

A scant 2,500 residents remain in Hasankeyf, despite a sluggish tourism-based economy and a decades-long moratorium against building new homes and businesses during the construction of the dam. This past summer, the filling of Ilisu’s reservoir was delayed due to drought in Iraq — which helped to build hopes that Hasankeyf’s end could be postponed again. But strong rains this spring have forced the Tigris to swell above its normal levels, suggesting that if there ever was a time to fill it, it would be now. 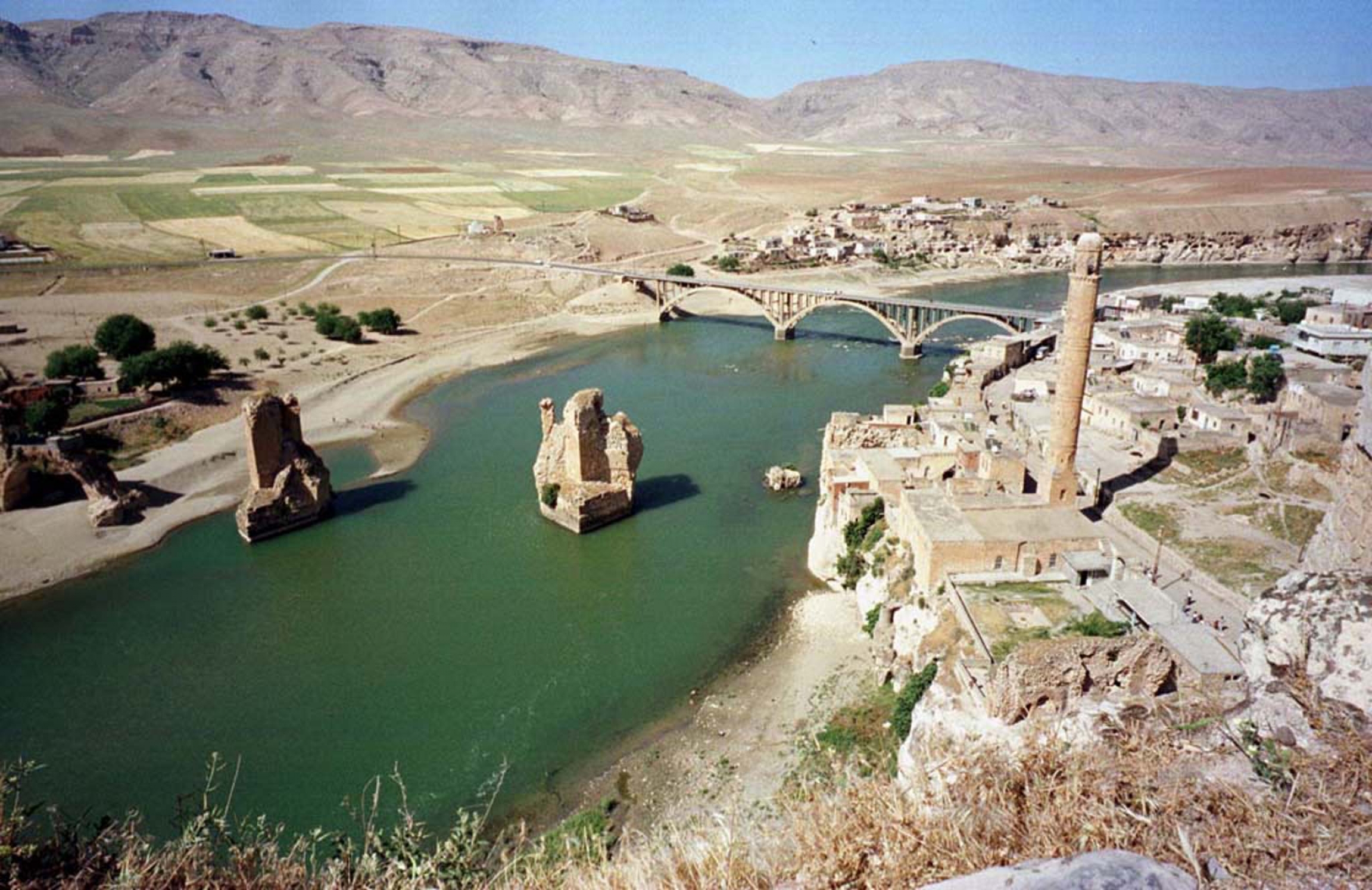 The Tigris river flows through the once-powerful town of Hasankeyf, which it has sustained through wars and hardship for thousands of years. In the next millennium, those same clear waters will submerge the crumbling ruins and caves, all for the sake of a huge energy and irrigation scheme to regenerate Turkey's southeast region. This picture was taken on May 19, 1999.

‘This is the decision that has been made, and we have to respect it’

Arguments against the dam do not phase Omer Guzel, who is a government representative in Hasankeyf and a member of the ruling AK party. Sitting in a restaurant in the part of town that will soon be underwater, Guzel sees opportunity. And a population that can adapt.

“I don’t think my people are being mistreated,” Guzel says, launching into a detailed description of plans for future tourism in the area.

A mile and a half away, above the reservoir’s future water line, are the rows of matching homes and newly planted parks of “New Hasankeyf.” Soon-to-be displaced residents were offered payment plans to resettle here, and some have already moved. Several of Hasankeyf’s historic monuments were moved across the river to New Hasankeyf, clustered into an open-air cultural museum. 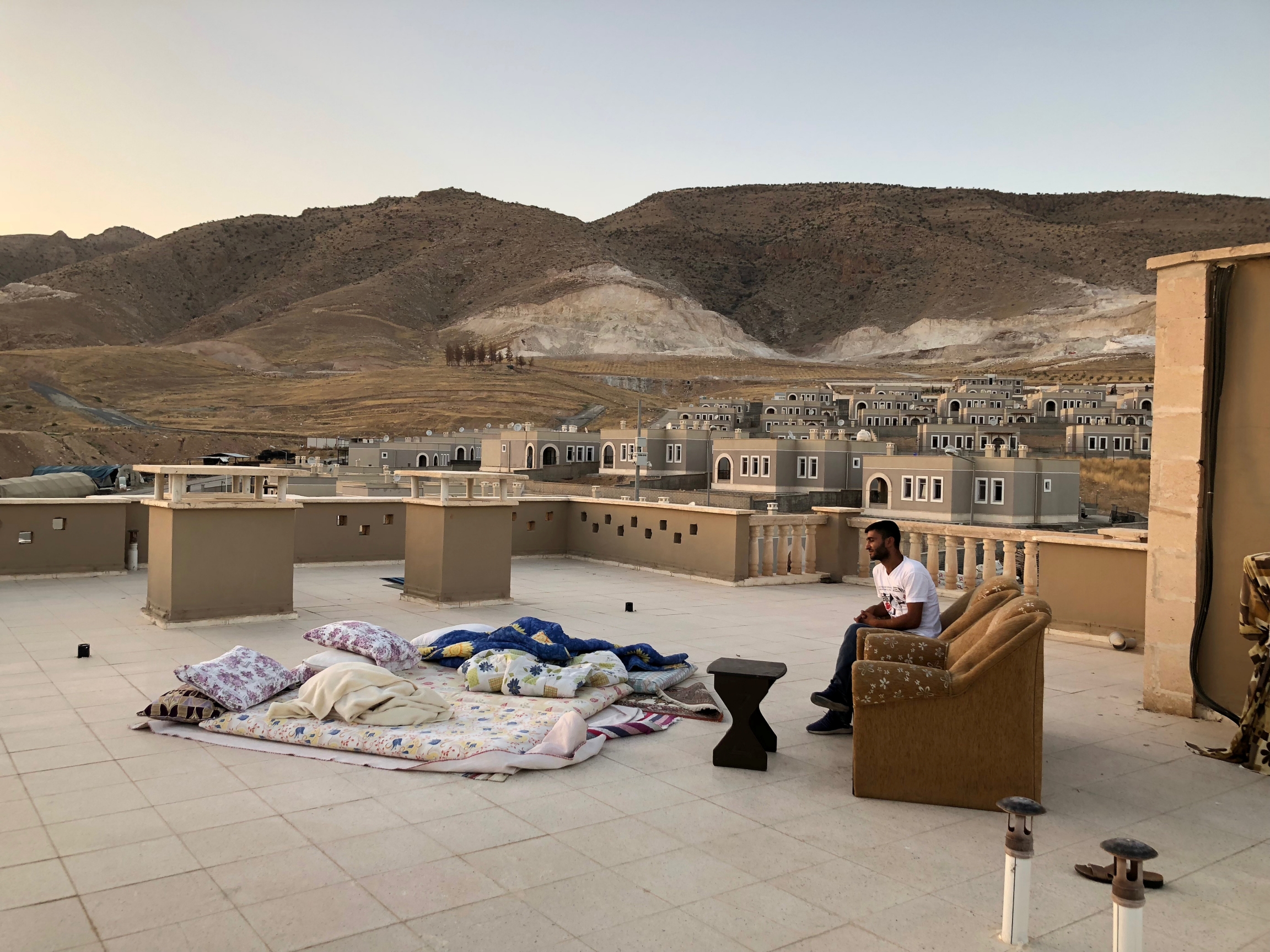 The Turkish government is building the town of New Hasankeyf for displaced residents, but many say the new homes are priced beyond their reach.

When the waters come, Guzel, says, tour boats will be able to traverse the lake created by the dam, so visitors can see the old Byzantine fortress on top of the hill. Other Turkish cities have done the same, and he’s confident that tourists — and income — will continue to stream in.

“We were born and raised here, so of course moving somewhere else creates a bit of sadness. ... But this is the decision that has been made, and we have to respect it.”

“We were born and raised here, so of course moving somewhere else creates a bit of sadness,” Guzel says. “But this is the decision that has been made, and we have to respect it.”

The historic pieces that could not be moved, such as the ruins of Hasankeyf’s 12th century stone bridge, have been fortified with concrete in preparation to be submerged. Others, such as ongoing archeological digs, will flood where they sit.

‘If people protest, they are punished’

For those who remain in Hasankeyf, it’s often because there is still some money to be made.

Tour buses still roll across the town’s dusty two-lane bridge every morning. Hasankeyf’s impending doom has created a small bump of visitors, hoping to have a last glimpse of the iconic homes and cafés on stilts, seemingly hugging the hilltop or sitting in a defensive crouch above the river. As chatty tourists poke around the rug stores and souvenir kiosks of the historic bazaar, shopkeepers and kebab makers stand stone-faced at the scene unfolding. 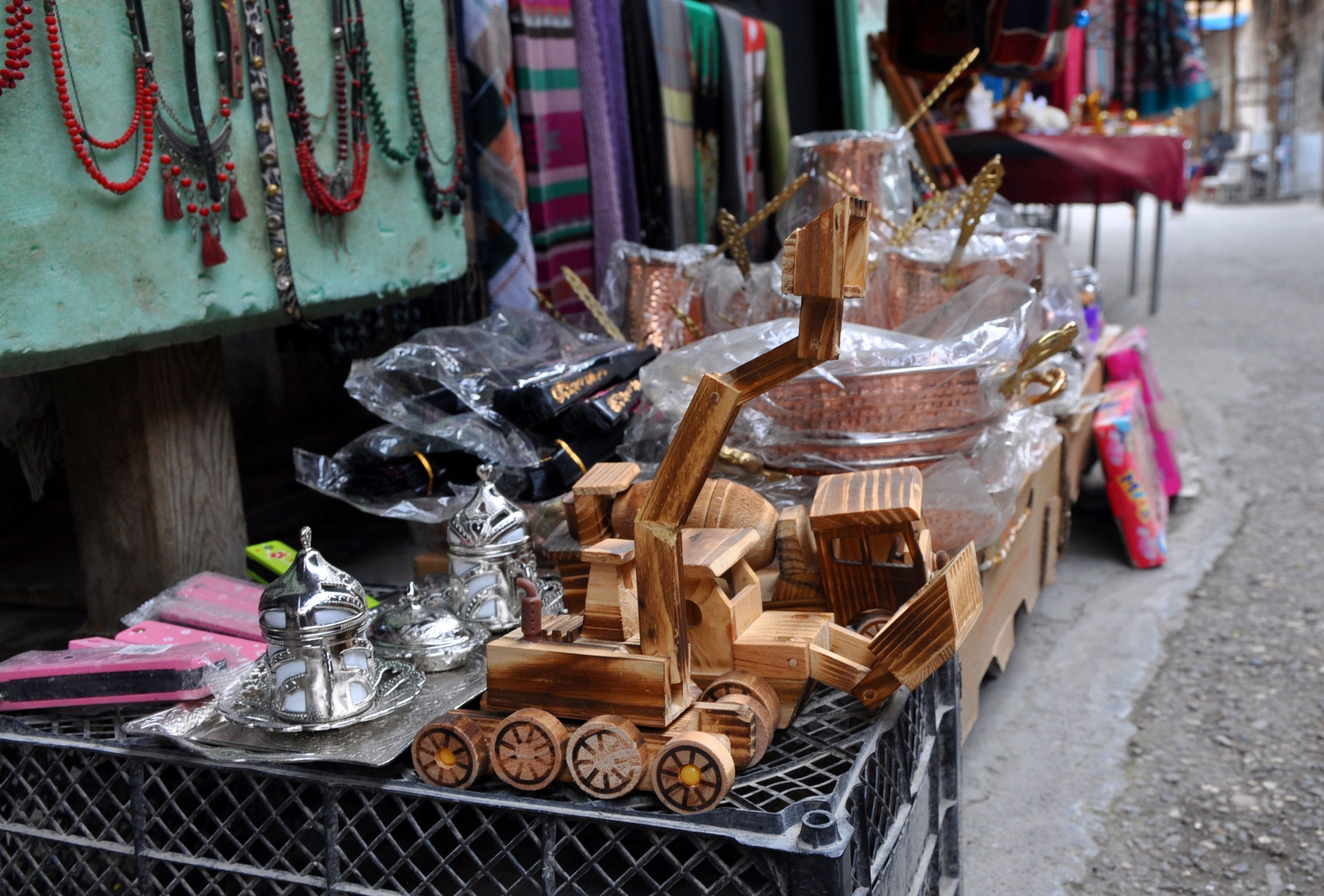 “You came too late,” one young man said. “Journalists came, we had many conversations. And still, nothing happened.”

The Turkish government estimates that 15,000 people will have to be resettled from the valley when the waters come, though opponents of the dam believe the total number of displaced residents is closer to 50,000. Some, including Fatima Salkan, say they were paid below market rates for their homes, leaving their future uncertain.

“We tried to protest but we could not, because they’ll call you a terrorist. ... If people protest, they are punished.”

“We tried to protest but we could not, because they’ll call you a terrorist,” Salkan said. “If people protest, they are punished.”

Turkey's president confirmed these fears in a 2016 speech in which he likened opponents of the Ilisu Dam to members of the PKK, a militant Kurdish separatist group that is listed as a terrorist organization by the US and Turkey. 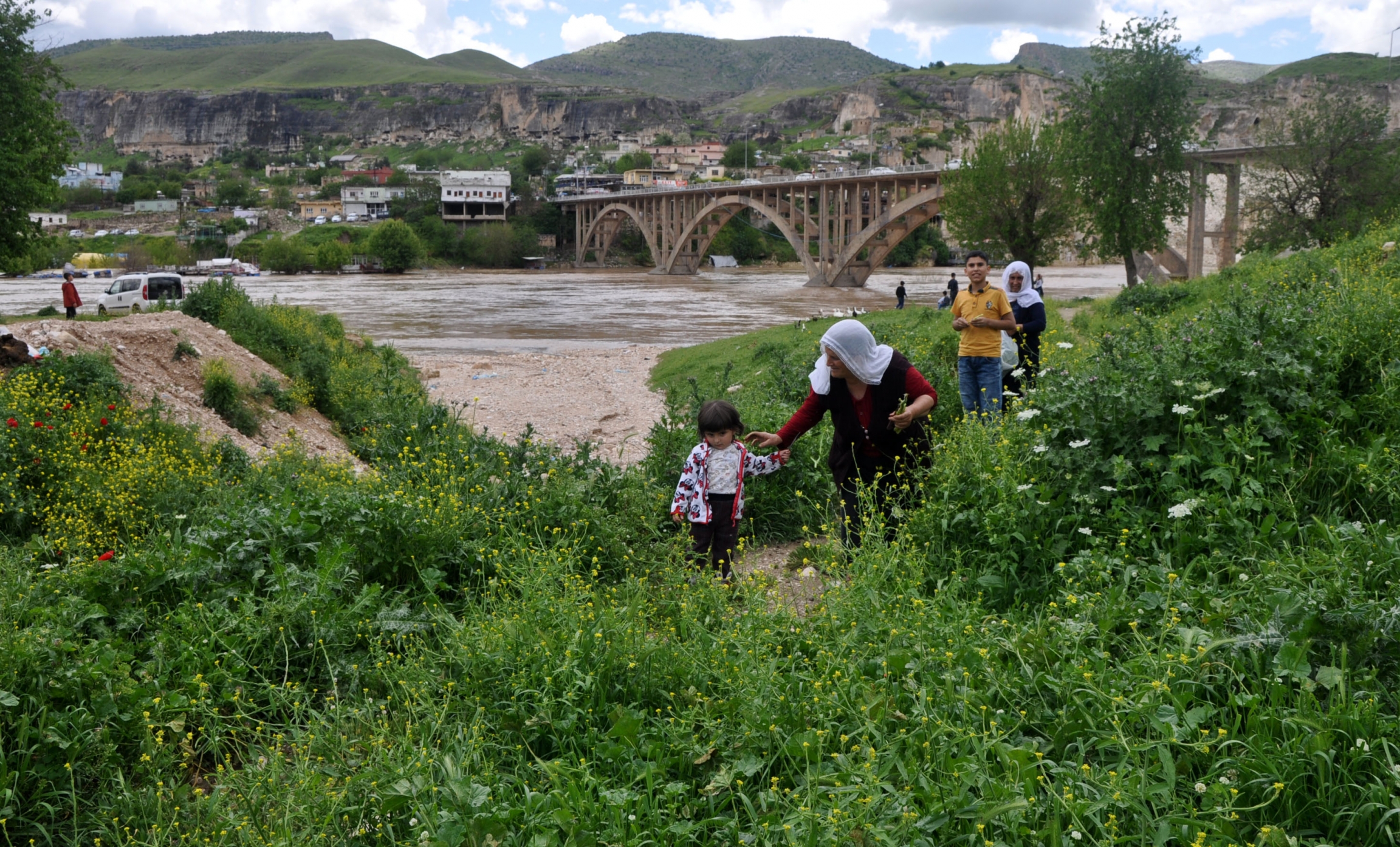 A family picks wild rhubarb shoots along the riverbank on a spring afternoon. Hasankeyf, in the background, is one of several villages that will be flooded by a 115-square-mile dam reservoir.

When the waters do come, everything that Salkan has known will be underwater. The home built by her father, all smooth white walls and a blue tiled roof. The shops owned by her neighbors. The tailors down the street. The leafy orchard nearby, which she has tended since she was a teenager.

It’s a short walk from Salkan’s home to her garden. She passes her primary school — now empty, its windows, broken and cracked.

When she ducks under the gate, she is surrounded by trees: figs, apricots, hazelnuts. Young grapevines climb a trellis on the north side. She planted this space with her mother and sisters after her father’s death. They would make tea and sit here until late at night, swapping stories in the grass.

“We wanted this place to be green,” she muses, sniffing the air. This is home. 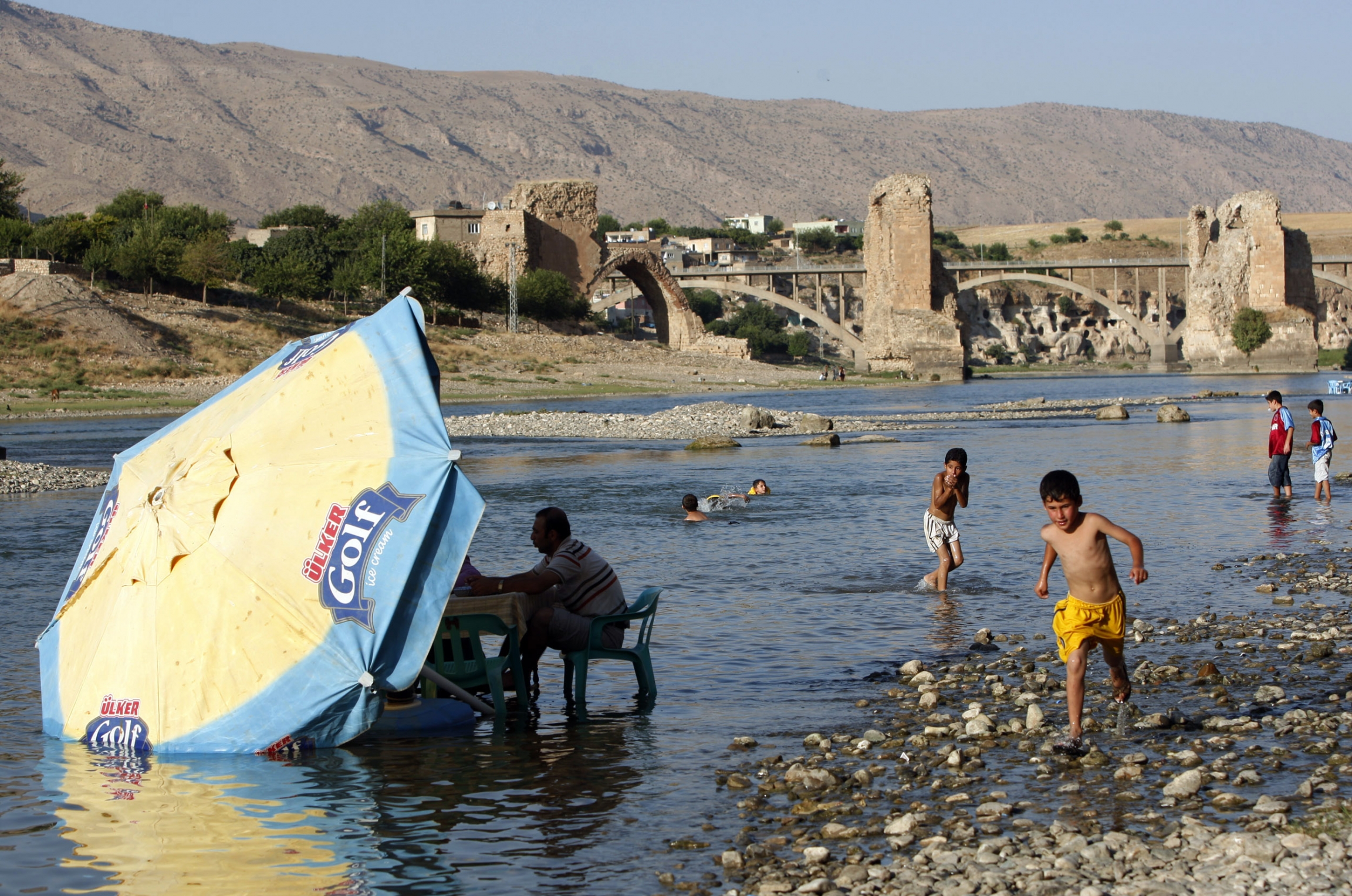 Turkish Kurdish men chat as children cool themselves at the Tigris river in the town of Hasankeyf, southeastern Turkey, Aug. 14, 2009. Partly under EU pressure, the government has taken small steps to improve cultural rights for Turkey's 12 million Kurds. The government plan is expected to allow Kurdish departments to be set up at university and pumping billions of dollars into the impoverished southeast.

Every year, she says, she plants a garden of vegetables in the center of the orchard. But this year, she knew she would be gone before the harvest. So the dirt is bare.

“Everyone has cut down their trees, but not me,” she says. “I couldn’t do it.”

Isn’t it difficult, she says — after all those years and all this work, to just pick up and leave?

Related: The era of mega-dams in Brazil may be coming to an end