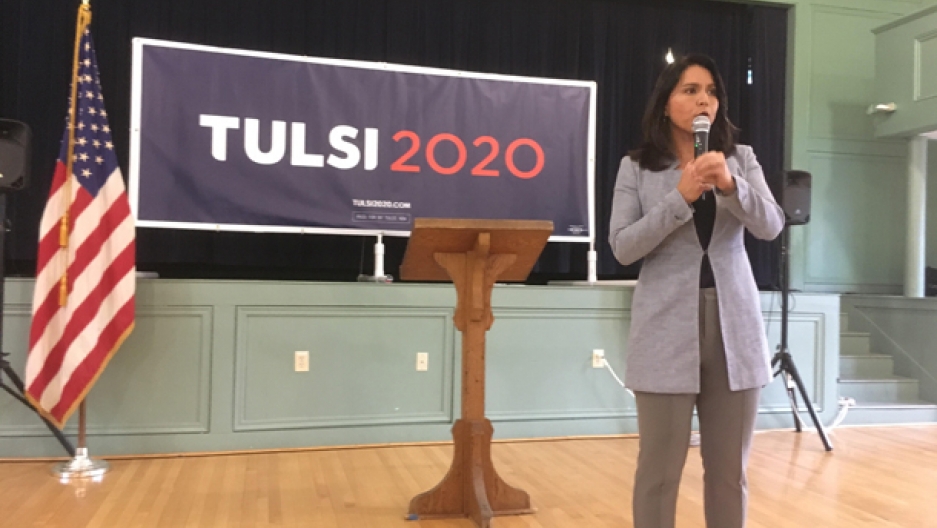 On a recent campaign stop in Exeter, New Hampshire, Democratic presidential candidate Tulsi Gabbard greeted nearly everyone with a handshake and a warm "Aloha."

At age 38, Congresswoman Gabbard has represented Hawaii’s second district since 2013, but she got her start in politics in the state legislature. She was just 21 years old at the time, which made her one of the youngest female state representatives in US history. She left the state government to join the Hawaii Army National Guard and served two tours of duty in Iraq and Kuwait.

Gabbard says aloha means much more than just hello and goodbye. It’s an expression of love, kindness and mutual respect, both for people and the land. Like our first president from Hawaii, Barack Obama, Gabbard hopes the spirit of aloha will carry her all the way to the White House.

A crowd of about 100 people gathered in the historic Exeter town hall where Abraham Lincoln spoke in 1860. The wooden seats were filled and a handful of people stood at the back of the room. As people waited for Gabbard, staff and volunteers handed out plastic flower leis.

Gabbard is a lifelong vegetarian and a practicing Hindu, like her mother, who is of German descent. Her father is American Samoan and Catholic. Many supporters, including campaign volunteer Doug Brenner, say they are impressed by her military service and platform for peace.

“She talks about how important it is for all of us to breathe clean air and to have clean water and she talks about environmental issues in a very bipartisan way. Because it’s not just one party or the other that wants clean air,” Brenner says. “It’s something that we all need.”

Representative Gabbard spoke for about 45 minutes, mainly about the need to scale back military intervention abroad. She said there is a peace dividend to be had when we stop spending trillions of dollars on regime change. We should instead invest that money domestically, on health care, infrastructure and the environment.

Gabbard grew up surfing and "having a deep appreciation for our environment." It wasn't something she had to be taught, she says. Environmental issues, especially water quality, inspired her to run for the State House of Hawaii at age 21 and still spur her to action. “Water is life. It is essential to everything else,” Gabbard says. “If we don't have clean water to drink, then we have nothing.”

In 2016, Gabbard traveled to North Dakota, along with thousands of Native Americans and other military veterans, to join the Standing Rock Sioux in rejecting the Dakota Access Pipeline. She says her decision to join the Sioux at Standing Rock was in part motivated by her concern for water safety. “Unless we stand together, recognizing that a threat to our water in one place is a threat to our water everywhere, then we are threatened and destined to perish,” Gabbard insists.

Representative Gabbard has not co-sponsored the Green New Deal resolution to tackle climate change out of concern that the language of the resolution is too vague. But, in 2017, she did introduce a measure that would eliminate tax breaks for fossil fuel companies and provide transitional support for workers in those industries. Its goal was for the US to generate 100% renewable energy by 2035.

“We have to address the seriousness of this threat and stop treating it like a political football,” Gabbard says. “We can and must do so by recognizing that the effects of climate change are threatening people in communities all across the country, whether you're in a Republican state or a Democratic state. In order to bring about the kind of big change that we need to see, we have to come together and unite toward making the big investments that we need to make.”

“And we have to be real,” she adds, “about the fact that, even as we must do all that we can here in this country, it still won't be enough unless we build relationships based on cooperation, rather than conflict, with other countries that are big contributors to this threat — countries like China, for example. While we have differences in certain areas, this is an issue that is a global crisis and can only be addressed with global action.”