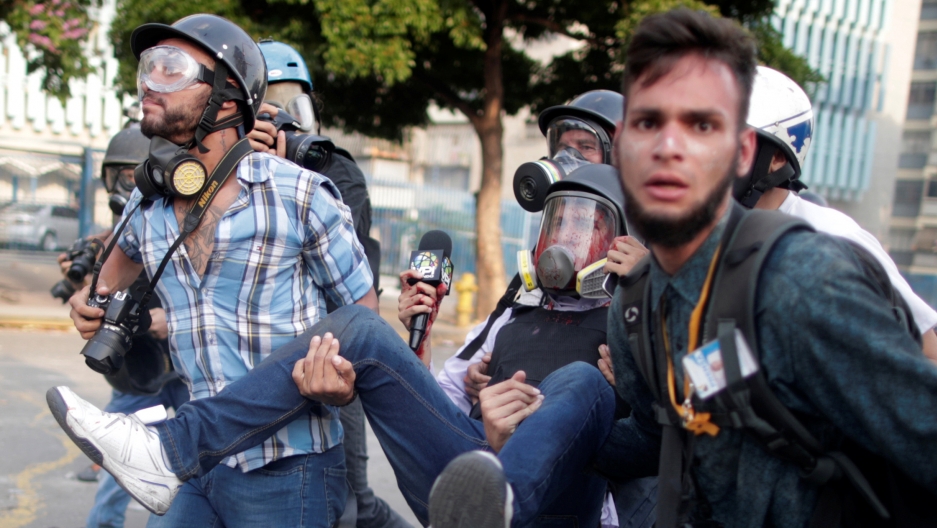 An injured member of the media is carried away during a May Day rally against the government of Venezuela's President Nicolás Maduro in Caracas, Venezuela, May 1, 2019.

There’s a startling headline for nearly every country in the world when it comes to press freedom:

The US now ranks as a ‘problematic’ place for journalists

Around the world, the state of the free press is under assault. According to the 2019 World Press Freedom Index released last month, “hatred of journalists has degenerated into violence, contributing to an increase in fear.”

“The number of countries regarded as safe countries where journalists can work in a proper condition, in complete security, is declining month after month, year after year,” said Pauline Adés-Mével, head of the EU and Balkans desk at Reporters Without Borders. “We’ve seen that authoritarian regimes are tightening their grip on the media everywhere. This is extremely worrying. Information is a right in theory, and in practice, it is not anymore.”

"Information is a right in theory, and in practice, it is not anymore."

The Committee to Protect Journalists recorded 54 journalists killed in 2018. They’ve recorded five in 2019, the most recently being the murder of Irish journalist Lyra McKee only weeks ago. And more than 250 journalists were in prison in 2018.

Adés-Mével said journalists have become increasingly in danger while covering protests and pointed to beatings of reporters trying to cover the Yellow Jacket protests in France.

“This is an issue which is completely global from Venezuela to France to eastern countries,” she said. “Journalists are not safe in demonstrations anymore. They are very often the target of police forces. They are prevented from covering demonstrations in a proper manner. They are not able to provide information, so citizens are deprived of their right to information.”

“We expect this to be a wake-up call for populations because it’s complicated,” Adés-Mével said. “We fear that we could get used to a world with no information, but that it would be too late.”

Officials gathered in Addis Ababa to mark the day and support a free press.

But the fact that World Press Freedom Day celebrations will take place in Addis Ababa, Ethiopia, is hopeful yet ironic.

Until 2018, Ethiopia was one of the most-censored nations in the world and one of the “worst jailers of journalists” in sub-Saharan Africa, according to the Committee to Protect Journalists (CPJ). Ethiopia’s state-run telecommunication company, EthioNet, was the only internet service provider, leading to frequent cases of internet censorship, surveillance and blocking.

But new prime minister Abiy Ahmed, 42, has ushered in swift and major reforms over the last 12 months and journalists have experienced a sea change in press freedom.

Abiy called for the release of all journalists held in prisons, including renowned journalist Eskinder Nega, who had been charged with terrorism and sentenced to 18 years in prison. For the first time in 14 years, CPJ recorded no journalists behind bars. The country unblocked over 260 websites and lifted various bans on digital media outlets. Abiy’s administration also opened the telecoms sector to limited competition.

But journalists there remain wary and haunted by the recent past.

Nearly 10 years ago, the ruling Ethiopian People’s Revolutionary Democratic Front introduced the Anti-Terrorism Proclamation, a broad set of laws that made it easy to target dissidents and activists for “security-related offenses,” which created a culture of pervasive fear and silence. At least 60 journalists have fled the country over the last decade, according to the Carnegie Endowment for International Peace.

“There is greater freedom,” says journalist Arefaynie Fantahun, founder of Ethiopia Observer. “My ability to work indeed changed for the better, though I should say running a website in English is a slightly different experience than other press products written in local languages.”

But this fight isn’t over, says Fantahun, who at one point abandoned journalism because of the roadblocks he encountered.

“The most important task lies ahead,” he says. “Something hard to change [is] the attitude of the public and government officials on the role of the media. They expect it to be their spokesperson. When the media doesn’t do that, they would go on categorizing it and labeling it, which also means depriving the media information.”

And Ethiopia today is considering a hate speech law that critics, including Human Rights Watch, say is too broad and will affect the press.

But where Ethiopia has improved, many countries have fallen, according to the Press Freedom Index.

The world watched in horror as the details of the murder of Washington Post journalist Jamal Khashoggi were slowly reported. Khashoggi wasn’t the first Saudi journalist to mysteriously disappear. Saudi Arabia ranks 172 out of 180 on the Index.

But Khashoggi’s death is evidence that helps show what can happen to journalists, RSF’s Adés-Mével said.

“It's very important that we don't forget, that we continue to pressure the authorities who conduct such behavior,” she said. “We also use this case to really prove how journalists can be attacked.”

The same is true in the wake of the murder of Lyra McKee in Londonderry last month.

“This death of a journalist on the ground is the evidence that journalists are not safe in democratic countries anymore,” Adés-Mével said.

"This death of a journalist on the ground is the evidence that journalists are not safe in democratic countries anymore."

Journalists fled Venezuela in 2018 and record numbers were arbitrarily arrested and harassed, RSF reported. The country ranks 148, a continued slide in the Index. (It was 117 in 2013.) 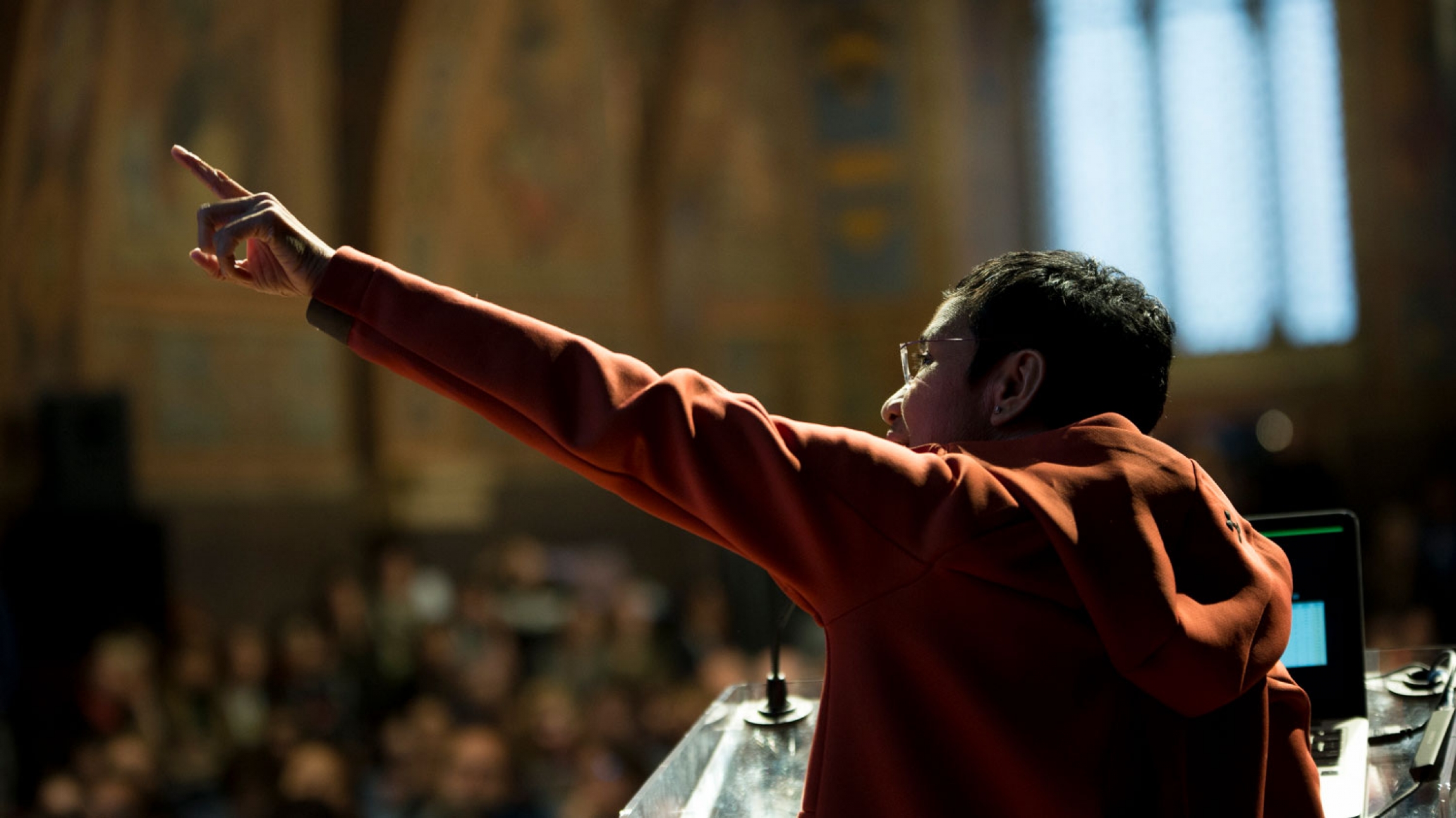 Maria Ressa, CEO and executive editor or Rappler, gives the keynote address at the International Journalism Festival in Perugia, Italy, on April 4, 2019. Ressa was named one of Time's 2018 people of the year.

Maria Ressa, who runs Rappler, an investigative news organization in the Philippines, told The World in a recent interview that journalists are the “canaries in the coal mine.”

Ressa faces 11 different charges from the Philippine government ranging from tax evasion to libel and was named one of Time Magazine’s “Guardians” for its 2018 person of the year.

“It's become an oppressive atmosphere,” she said. “There's a brutal drug war that's real-world violence and online violence — hate used to incite hate — journalists being the target. I've been a target of as many as 90 hate messages per hour. That's insane. I mean, this is a kind of psychological warfare that we've never dealt with before. We could hide behind our newsgroups. There's no way to do that in this day and age.”

"I've been a target of as many as 90 hate messages per hour. That's insane."

Adés-Mével said that online threats are increasingly being directed at all reporters, but women are often attacked more frequently and more intensely than men.

The Philippines ranks 134 on the index and three reporters were killed there in 2019. And Rodrigo Duterte said this when sworn in as president: “Just because you're a journalist, you are not exempted from assassination if you're a son of a bitch. Freedom of expression cannot help you if you have done something wrong.”

But Ressa remains committed to her work and encourages other journalists to do the same.

“Democracies can turn overnight,” she said. “You can lose rights very quickly and I'm shocked at what's happened to the Philippines. So — hold the line. I think we need to demand accountability. We need to stop impunity.”