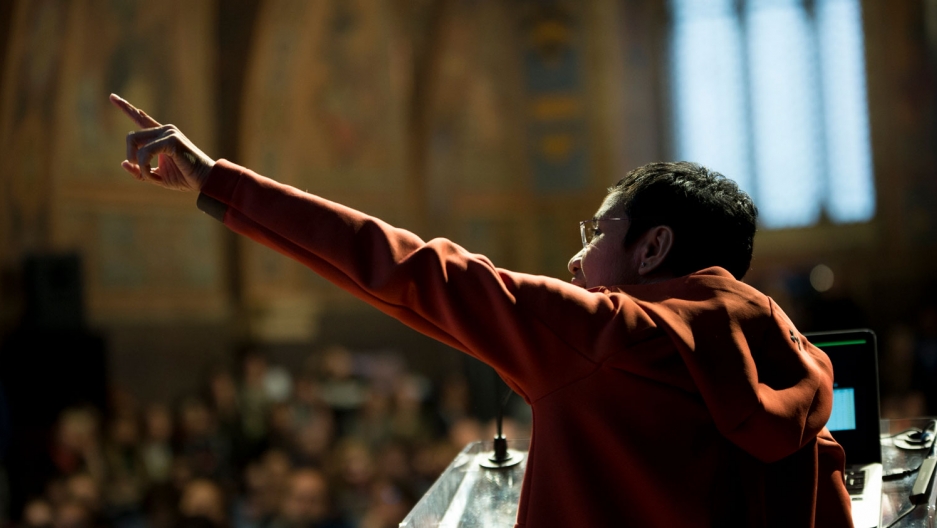 Maria Ressa, CEO and executive editor or Rappler, gives the keynote address at the International Journalism Festival in Perugia, Italy, on April 4, 2019. Ressa was named one of Time's 2018 people of the year.

Filipina journalist Maria Ressa says journalists need to "hold the line" as democracy is under threat throughout the world. The Philippines and her news organization, Rappler, she says, are the "canaries in the coal mine."

Ressa, who was among the "Guardians" that Time Magazine named as its 2018 person of the year, is facing 11 different charges from the Philippine government ranging from tax evasion to libel. The charges are widely believed to stem from Rappler's critical reporting on topics such as President Rodrigo Duterte's drug war.

Last Wednesday, Ressa appeared in court for her arraignment where she pleaded not guilty to four charges of tax evasion. She then got on a plane and flew to the International Journalism Festival in Perugia, Italy, where on Thursday she delivered a keynote speech on the role of journalists at a time when social media has fueled the spread of disinformation, threatening freedom of the press and other tenets of democracy. There Ressa said the international community's support has given her courage to fight the charges.

The World’s Tania Karas caught up with Ressa at the festival.

Tania Karas: Maria, can you remind us of the accusations against you? What are they and what were you arrested for most recently?

Maria Ressa: First, there are so many in 14 months. The Philippine government has filed 11 cases and investigations against Rappler. In about three months I posted bail eight times; I've been arrested twice in just a little over a month. The charges are crazy. I've run out of synonyms for the word ridiculous, ludicrous. The first time I got arrested was for a case on cyber libel. It's for a story we did in 2012 that was published before the cyber libel law was even enacted. The second time I was arrested was for something called the anti-dummy law, for violating that. It means that I was acting essentially as an agent for a foreigner. Most of these 11 cases stem out of one act, which is [that] we gave an investment to Omidyar Network. Every other case stems from that — there are five tax evasion charges from that transaction that the government filed. I've been arraigned last week on this, on four of the tax evasion charges.

There's a lot at stake. Those four tax evasion charges, each one carries a minimum of two years and a maximum of 10 years. So if I lose on four charges — there are five — that would be 40 years in prison. The anti-dummy law carries a maximum charge of 15 years in prison.

Again, I can only laugh because I'm not a criminal. My only crime is to be a journalist, and I will continue speaking truth to power.

Related: Maria Ressa says journalism is democracy's 'first line of defense' and Rappler won't back down

"The charges are crazy. I've run out of synonyms for the word ridiculous, ludicrous."

Can you tell us what happened on Wednesday? That's the day that you were arraigned, and then you came here shortly after.

It was a 24-hour day. I began in Manila with an arraignment for criminal charges for charges of tax evasion. It was actually — it gave me some hope. It's in front of three judges in the court of tax appeals. It was professionally done. I hope that there will be a sense of justice for me in that right.

But then that was also the time when I finally got approval to travel to Perugia. My plane was leaving at 6:30 that night. So from court, I went to the office to do a management meeting and then ran to the airport. So it was like I started the day, the 24-hour period, in Manila, facing tax evasion charges and ended it in front of these journalists.

Did you have any issues getting out of the Philippines, actually flying out when you were at the airport?

No, but I had to get approval from six different courts to be able to travel. And slowly I'm feeling my rights getting hemmed in and I think this is why my other challenge is anger management. I feel a sense of injustice that I have to deal with these things but you know, bring it. This is a battle for the quality of democracy of the Philippines. As long as our constitution is in place — it's patterned after the United States. We have a bill of rights, freedom of the press is enshrined, freedom of expression. We will not cede ground lightly.

"We're the canary in the coal mine for you. Democracies can turn overnight. You can lose rights very quickly and I'm shocked at what's happened to the Philippines."

Do you feel at risk on a day-to-day basis?

It's become an oppressive atmosphere. We've had to increase security because we're surrounded by violence. There's a brutal drug war that's real-world violence and online violence — hate used to incite hate, journalists being the target. I've been a target of as many as 90 hate messages per hour. That's insane. I mean this is a kind of psychological warfare that we've never dealt with before. We could hide behind our newsgroups. There's no way to do that in this day and age.

What happens next in the case against you?

I've had the first arraignment. There are 11 more. You know, a lot of my time. I mean, the reason why these cases have been filed is [because] it's a war of attrition as well. Right?

What I hope to do is continue our focus, continue doing hard-hitting investigative news stories. We continue doing civic engagement. We need to make sure that we're resilient. I think this is what our societies have to deal with. How can we create resilient communities against exponential lies and have those communities be able to hold our governments to account?

What is your message to fellow journalists?

On our end, what we've found is [that] the best thing we can do is continue to shine the light and you empower us by telling our stories. We're also a cautionary tale for you. Cambridge Analytica — the most compromised accounts — were in the United States. The second country that had the most compromised accounts was the Philippines. We're the canary in the coal mine for you. Democracies can turn overnight. You can lose rights very quickly and I'm shocked at what's happened to the Philippines. So — hold the line. I always say, "Hold the line." I think we need to demand accountability. We need to stop impunity. Those are the two main things. And whether it's in the Philippines or the United States, that's a good rallying cry.