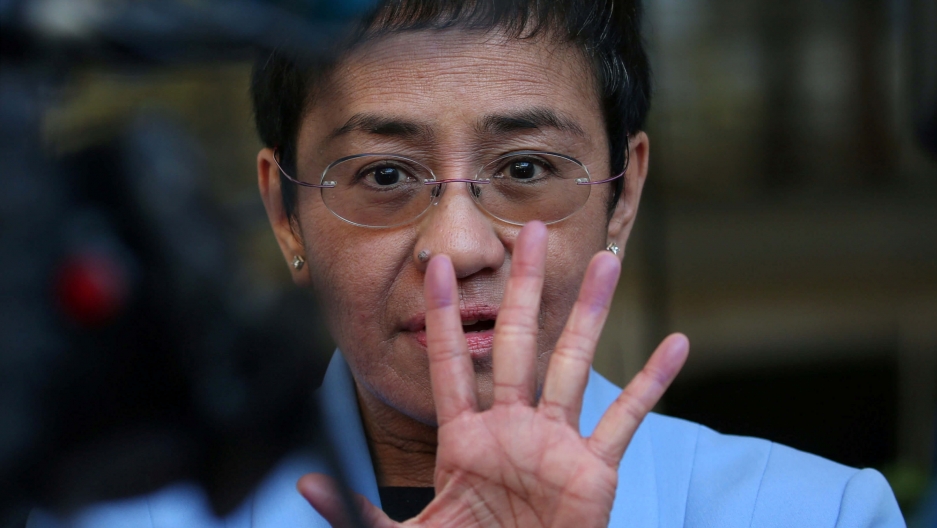 Editor's note: Maria Ressa, head of the news site Rappler, was freed on bail on Thursday, a day after her widely condemned arrest on libel charges that critics say is a government effort to bully journalists. Ressa was arrested by Filipino authorities on Feb. 13 on cyber libel charges stemming from a story published in May 2012 (and updated in 2014), which linked a businessman to murder and trafficking of humans and drugs, citing information in an intelligence report from an unspecified agency. The Justice Ministry filed the case on behalf of the businessman, who denies any wrongdoing. National Bureau of Investigation officers escorted Ressa through a group of members of the media. "People should know that the line has been crossed," Ressa told reporters.

In this age of fake news and presidents who label the media "enemies of the people,” pursuing the truth can be dangerous. That's why Time honored journalists with its “Person of the Year” award. They’re calling the reporters who have risked their lives this past year — and in some cases lost their lives — while pursuing the truth, “The Guardians."

Time's People of the Year include Jamal Khashoggi, murdered in October 2018 inside the Saudi consulate in Istanbul; Kyaw Soe Oo and Wa Lone, two journalists working for Reuters in Myanmar who were jailed for covering the persecution of Rohingya Muslims by the country's military; the entire staff at the Capital Gazette, the local paper in Annapolis, Maryland, attacked by a gunman last June; and Maria Ressa — founder of the investigative Rappler Media in the Philippines.

Ressa and Rappler have been covering extrajudicial killings in the country, part of President Rodrigo Duterte's so-called war on drugs.

They've also been documenting how Duterte has weaponized social media to go after and silence journalists and critics. More recently, Ressa and her company have been targeted with tax evasion charges by the Filipino government — charges Ressa firmly denies.

The World has spoken with Ressa before and on Tuesday she joined host Marco Werman again to talk about what's happening in the Philippines.

Marco Werman: We've been talking about you a lot on the show lately. What is your reaction to being part of Time's People of the Year?

Maria Ressa: I had to look at it. Khashoggi's brutal murder done with impunity; the Reuters journalists Wa Lone and Kyaw Soe are still in prison for a year now; just this morning I posted bail for four more tax evasion charges; and what's happening in the United States now, the Capital Gazette. We're at this existential moment and the award recognizes that now is the time we need to mark this moment because we're going to battle and the challenges are very real, they have very real costs and our democracies are challenged — and the first line of defense is the journalists.

Just remind us what you've been working on as a journalist in the Philippines and why it's such a risk.

We started Rappler, a startup that began in 2012, and we know the best of social media because we grew exponentially — we live online. We're an investigative outfit that used the technology to build communities of action. But something changed at the end of 2015, the beginning of 2016. With the election of President Duterte in May of 2016, by July, when he began the drug war, we noticed that anger and hate were being used to stifle alternative narratives. Anytime anyone questioned extrajudicial killings, they were brutally slammed on social media — and Facebook is our internet in this country — to a point that it created a spiral of silence. So this kind of impunity that threatened violence happened in July of 2016.

By August, we brought the data to Facebook and then continued doing these exposés on the disinformation war, the propaganda war on social media. Today, the police claimed that they have killed 5,000 people in the drug war. But what they don't always add is that they're also investigating 30,000 other deaths. So, how many people have really died? And this level of impunity, how long can it be sustained? How long will Filipinos be OK with this?

Maria, you just mentioned posting bail on one of several tax evasion charges. When we spoke with you last, we were talking about those charges and you're going back to Manila to face them. What is the latest on those cases?

I've been indicted on five counts, five different cases of tax evasion stemming from one mother case that was filed against us in January this year that tried to take away our license to operate. We've done quite well [because] that mother case has been remanded back to the regulatory agency. But yet, the tax agencies have gone ahead and I've been indicted in this and could face up to 10 years in prison. I'm going to face them because — I've run out of synonyms for the word ludicrous for these charges — the only way that they can call me a tax evader is by classifying Rappler as "dealer in securities." We are obviously not a stock brokerage house. We obviously don't deal in securities. I'm not a stockbroker. So, I always say, "bring it. I'll see these charges in court."

And do you believe these tax evasion charges are a way of slowing your work down and that of Rappler Media?

Yes, absolutely. We're small and this takes away both time and resources and money that I could be using to build a better tech platform. For example, I'm using to pay lawyers. But I guess that's part and parcel of being a journalist in the Philippines today. The best part is by targeting me personally, in a way, I feel unshackled. I have firsthand experience of how the law is being weaponized against perceived critics. I'm not a critic of the government. I call a spade a spade. I've been a journalist for more than 30 years and will continue to do my job. That's what these times are teaching me. I've never lived through something quite like this. It's made it clear to me that the values, the standards and ethics that we just have to — now, more than ever — hold the line.

How do you think being included in the Time's Person of the Year is going to affect your work in the Philippines?

I hope positively, but you never know. There's a saying in Indonesia: "you know that the nail that stands up, gets the hammer." That's the rough translation. It wasn't my choice to be targeted, we weren't the first to be targeted, but we were among the first not to duck.

In our country today, I talk about the three C's — the way government gets you to do what it wants you to do. And that is: corrupt, coerce or co-opt. And Rappler refuses to do any of that. We want to continue doing the story, we call a spade a spade because now when facts are debatable, we need to tell the stories and we continue to do that. And just by helping us shine the light ... that has certainly been our best defense.

It's a disparate group of journalists that you're part of. What do you see that you have in common with the group?

It's dangerous to be a journalist and we take those risks and we know that those risks are part and parcel of what our job demands today — and we walk in with our eyes wide open. The journalists in Myanmar have been imprisoned a year and they're facing the same things we are, which is, there was hatred that was fomented by the military. But we tell the stories. That's what we're supposed to do.

There are all these claims of fake news these days often from strongman leaders often used to discredit credible journalists. What hope do you have that the overall atmosphere in the world is going to change for reporters?

I think about this short, medium and long-term. In the short term, the group that has the power to change it almost immediately — this is if they take responsibility for it — are the American social media platforms that have allowed the lies to multiply and to be weaponized against journalists or perceived critics. Unfortunately, it's authoritarian rulers that have learned to manipulate social media and weaponize social media against the truth. Facebook is the world's largest distributor of news. Will it take the responsibility that came with it, that human journalists used to do? Because if they don't, we can't agree on the facts. In the medium term, journalists are important. We need to stand up and continue doing what we do because it's a changed world. The technology, these exponential lies, the rise of populist strongman leaders, is partly the manipulation of the human psyche. We've always said, "information is power." From my experience in the Philippines, part of the reason that information has helped turn the world upside down is because of technology. Hopefully, the pendulum stabilizes. And the new gatekeepers have to drain the toxic sludge so that real dialogue can again begin.

I'm curious, how are Filipino media covering your Time's Person of the Year story?

I don't know yet, but I know that I've been getting a lot of a lot of congratulations. One of the things journalists globally are learning is that this is not something that can be separated by boundaries of the nation-state. The old ideas of competition, they should be thrown out. We need to work together because the worst of human nature has been encouraged by these populist leaders weaponizing social media and we need to come back to use the internet according to the values that will preserve our humanity — and that's part of what unites us.

Reuters contributed to this report