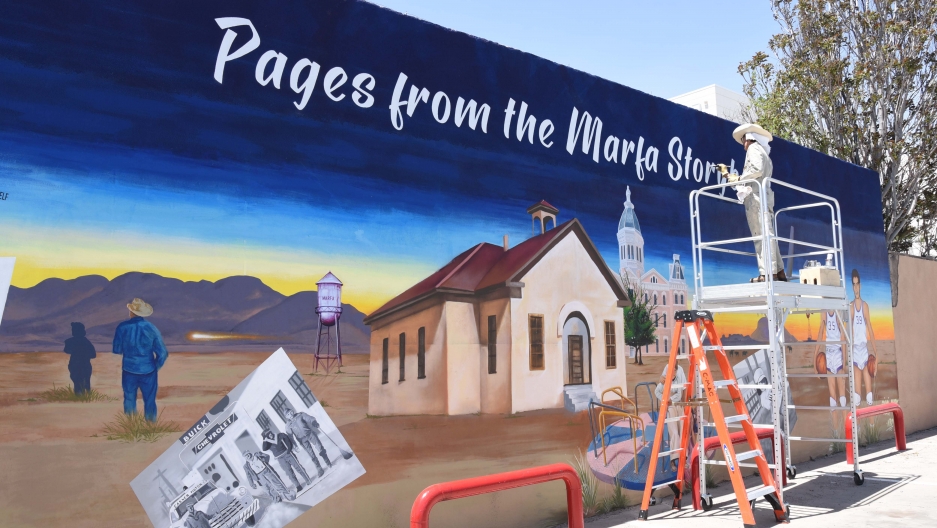 A community mural, "Pages from the Marfa Storybook," created by El Paso muralist Cimi Alvarado, gets a touch-up on April 17 in preparation for the Second Annual Blackwell Block Party in Marfa, Texas. The mural was presented during last year's block party in hopes of engaging the community and better educating visitors about the history of school segregation in Marfa.

In Marfa, a small town in far west Texas, more than two-thirds of the population speaks a non-English language, and 70% of the town's 1,800 residents are Latino. Hispanic families have lived in this working-class border town for generations.

But from 1909 to 1965, that linguistic diversity was suppressed. The Blackwell school — a segregated elementary and middle school for Mexican American children — had a universal rule: no Spanish allowed. 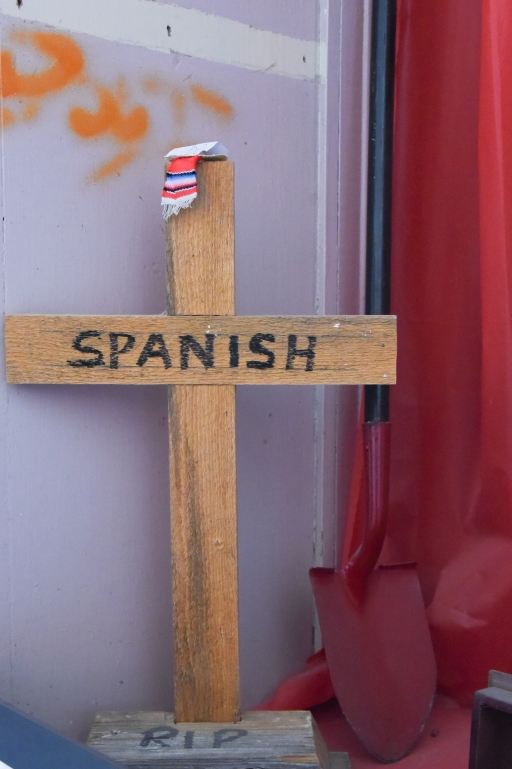 A small wooden cross with the words "Spanish" and "RIP" written on it is displayed alongside a shovel in the Blackwell School museum. Blackwell faculty organized "The burial of Mr. Spanish" to enforce the ban on Spanish language at the school.

School faculty enforced the language ban, even organizing activities like the “Burial of Mr. Spanish,” where students were asked to write their favorite words on slips of paper that were then placed in a cigar box and buried at the base of the American flag.

Related: At this school in upstate New York, students are free to speak Mohawk

Former Blackwell student Berta Sanchez, now in her early 80s, recalled a time her teacher reprimanded her for speaking in Spanish and shared it with the Blackwell School Alliance Oral History Project.

“I pointed a finger at him and said, 'You know what, no one is going to tell me not to speak my language. Because that’s my language and it’s yours because you’re also Hispanic,'” Sanchez said. “I went to the principal's and they gave me three licks [with the paddle].”

As a result of the Brown v. Board of Education decision, Blackwell closed in 1965, alongside a number of other segregated schools for Mexican Americans across Texas.  Many of the Blackwell school buildings were razed for public housing. The remaining school building was used as storage by the school district.

But when the Marfa school district discussed potential demolition of the deteriorating building in 2006, a group of former Blackwell students took action. Recognizing that the Blackwell school played an essential role in Marfa’s history, they rallied to preserve it.

Now, the Blackwell School Alliance is a nonprofit established with a focus to not only preserve and restore the historic school building but also interpret and commemorate the era of segregated Hispanic education.

Related: 'OK, Dad. Why did you kill Spanish in our family?'

“I feel like what happens when you constantly see your town in the news but don’t see yourself reflected in it, is you begin to lose a sense of ownership in the community. And we want to bring that back,” said Blackwell School Alliance Board President Gretel Enck. “We want people to be proud of our Mexican American roots. And we want to educate why that is so important.”

The Blackwell School Alliance’s efforts, with the support of other Marfa community members, are working to bring the Mexican American narrative to the forefront of town history, which is now more likely recognized for its arts scene, drawing visitors from across the state and the world.

“I went to school in Texas and I don’t remember ever learning about segregated schools for Mexican American children in history class,” said Christopher Williams, a visitor from Houston.

Hispanic students were separated into Blackwell through the practice of de facto segregation. While law mandated that black students attend separate schools, there was an unspoken understanding among Texas school districts to decide whether to separate Hispanic students or not. Most did, but some former students said they were unaware they were experiencing segregation until later in life. 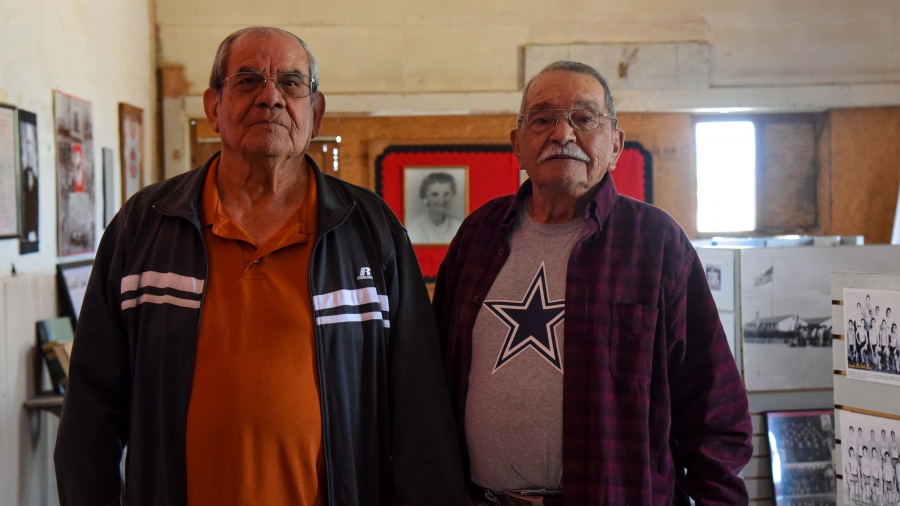 Former Blackwell students Lionel Salgado, who graduated eighth grade in 1951, and Mario Rivera, who graduated in 1957, pose among memorabilia and photographs displayed throughout the Blackwell School building on April 17, 2019, in Marfa, Texas.

“When I arrived in Blackwell, I didn’t know anything about English, and much less about the word 'segregation.' I never heard the word,” said Mario Rivera, who graduated from Blackwell middle school in 1957. “Nobody that I remember from my Blackwell years ever said, 'Do you know that we are separated from the others for whatever reason?”

Some students remembered Blackwell teachers moving beyond the language divide.

“The teachers didn’t know Spanish, and we didn’t know English. So it was either swim or drown. I always stressed that we had good teachers because to put up with us and the language barriers and all that,” said Lionel Salgado, who finished eighth grade at Blackwell in 1951. “Their deal was to teach us. And they did a magnificent job to teach us. I still remember all of my teachers, all of them.”

Related: Bilingual education in the South: Confronting the challenges

But for many former students, Blackwell memories are a source of pain. The group of former students that supports the Blackwell School Alliance's efforts is working to grow the participation of other students who have shied away. Through events like the annual Blackwell Block Party, the organization offers opportunities for the Marfa community and its visitors to come together and learn about segregation in US history that impacted the Mexican American community.

“Blackwell was a place where people were sent to be separated,” said Rivera. “Judging from last year’s Blackwell party and up to now, Blackwell is becoming a place where the races are coming together.” 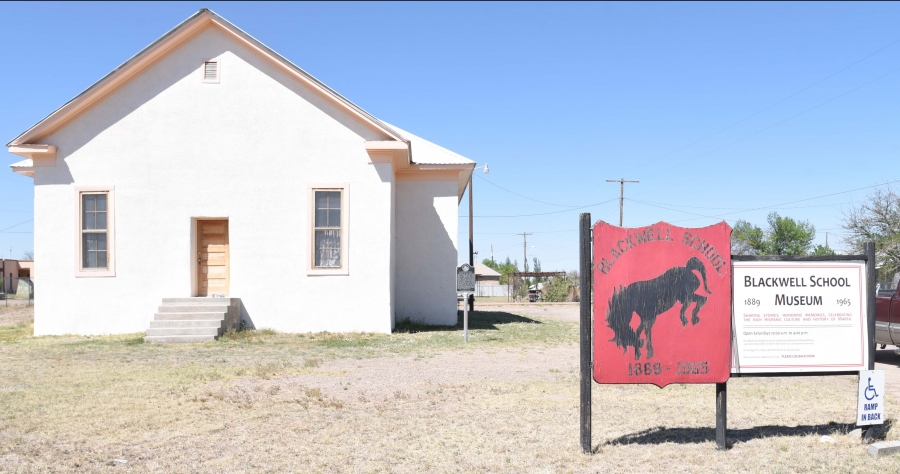 Last year’s Blackwell Block Party was supported by a group of volunteers that was predominantly white. Other newcomers to Marfa have been some of the biggest supporters of the organization.

This year, the Second Annual Blackwell Block Party, held April 27, featured a new community art project, “Images and Stories from the Archive,” in partnership with the Borderland Collective — a long-term art and education project based out of Texas State University.

The art project, which will be installed for one year, is a walking tour of Marfa’s history from the perspective of former students, teachers, friends and neighbors of the Blackwell School.

Today, the Blackwell school is currently a recorded Texas Historic Landmark, and the organization is working to be listed in the National Register of Historic Places. Only 60 miles north of Ojinaga, Mexico, the Blackwell stories are also an opportunity to reflect on the current political conversation surrounding the US-Mexico border former students say.

“All of the issues on the border, but particularly this thing that we as human beings do to each other in terms making somebody 'the other,'” said Gretel Enck, the Blackwell School Alliance board president. “And we see that really strongly in the way our politics and government is talking about the 'others' at the border.”

Preserving the history of Blackwell helps to move that conversation forward she added, asking, “How are the stories of the Blackwell School and the experiences of this community reflected in what’s going on today?"