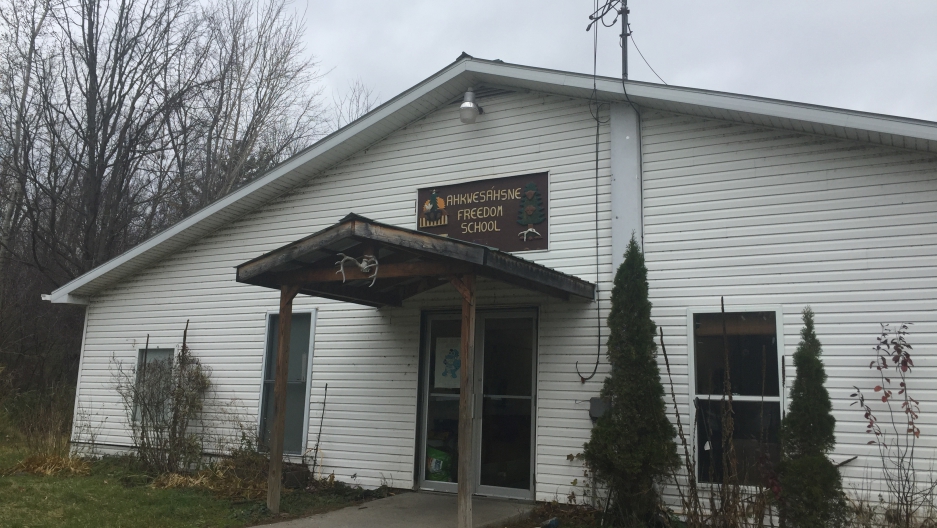 For more than 100 years, the governments of both the United States and Canada forcibly assimilated generations of Native people, taking their children and sending them to English-only boarding schools — a process that pushed the majority of indigenous languages to the brink of extinction.

More than 35 years ago, a small Mohawk tribe in New York decided to fight back by creating a school of their own.

During a recent Friday morning at the Akwesasne Freedom School, some 65 teachers and kids, sporting a mix of headdresses and hoodies, form a circle and make their way around the room to the beat of a water drum, chanting in native Mohawk.

They always begin with this song, "Standing Quiver," a tribute to hunters. A lot of reservation schools maintain traditions like these, but when the drum stops beating, the kids usually go back to class and back to speaking English. But here at Akwesasne, English is the foreign language. 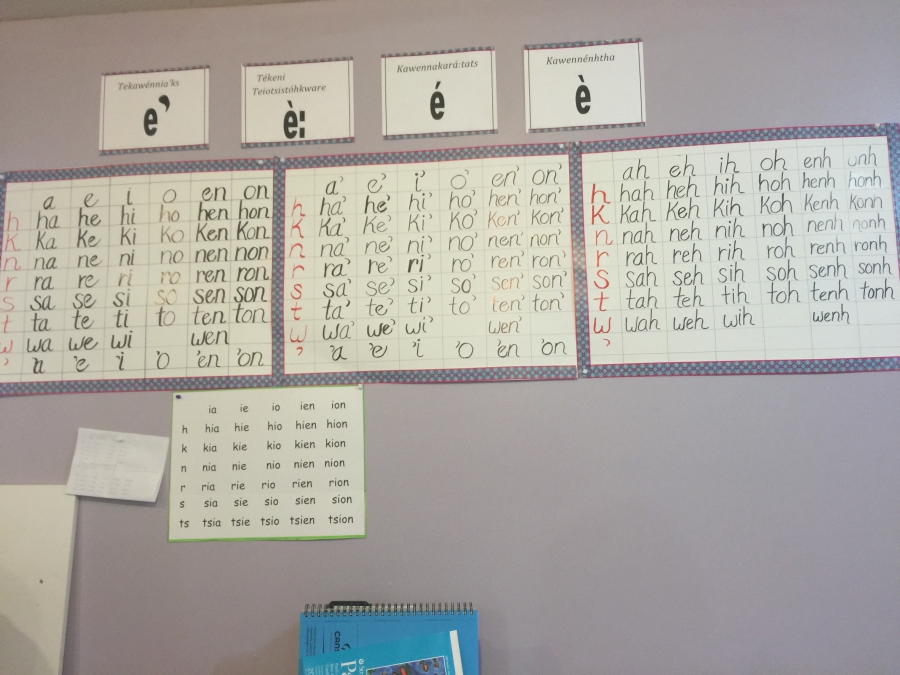 “We're not just teaching you to be a Mohawk who thinks like the outside system, but [a Mohawk who] thinks in Mohawk,” explains Iakonikonhriiosta, one of the founding teachers of the Freedom School.

It’s not as simple as just speaking the language, says Kahentente, Akwesasne’s phonics teacher. They also have to find creative ways to adapt ancient words to a very modern world. Take, for instance, the board games that the kids play — like Monopoly. In Mohawk, it’s called Ohwihsta.

“There's a lot of money involved, so we just call it the Ohwihsta, because ohwihsta is [the word for] 'money,'” explains Kahentente.

Like many other teachers at the school, Kahentente is a native speaker of Mohawk, which is unusual among tribes on the East Coast of the United States. But the remoteness of the St. Regis Mohawk Reservation, which sprawls from New York State, across a necklace of islands, and into Canada, has made the Mohawk more resistant to assimilation, like when agents from Native boarding schools on both sides of the border came for their children.

“It was common just for the Indian agent or an official of the government, to come into the home and say, ‘We're taking your children because it's obvious to us you can't take care of them,’” says Kaia'tahente, an upper-level teacher at the Freedom School.

Kaia’tahente’s own father narrowly escaped being taken to a boarding school, she says.

The Freedom School inverts the practices of those institutions — boarding schools where traditional clothing, rituals and Native languages were banned —  by putting Mohawk first.

“We're not just teaching you to be a Mohawk who thinks like the outside system, but thinks in Mohawk,” explains Iakonikonhriiosta, known by her nickname, Peachy. She was an early teacher at the Freedom School. “We're teaching our students to be Mohawks and to speak from the Mohawk perspective, or Khudaneshone perspective, which is controversial.”

Peachy helped found the school in the late 1970s — when enrollment in Native American boarding schools was at its peak.

From 1979-1980, the reservation was in tumult, locked in an armed standoff with the US government, and divided against itself, over what began as a dispute about building a fence around the US side of the reservation. Parents began to question busing their kids past roadblocks to state schools off the reservation.

“I think there were 25 of us that used to sit and think, ‘How are we going to start a school?’” says Peachy.

Meanwhile, members of the Mohawk tribe on the Canadian side of the reservation had already created their own Mohawk school, called the Kahnawake Survival School — to literally ensure their language and culture survived.

Suddenly, Peachy and her group had a model for their own school.

“There were women that were here helping us protest that were from Kahnawake [school] and they were like, ‘We can do this. Don't be afraid to do this.’ So people took their kids out of school and we started,” Peachy says.

The Mohawk language was just part of the curriculum at first. The decision to go full immersion came five years later. And it was a bittersweet moment for Peachy. 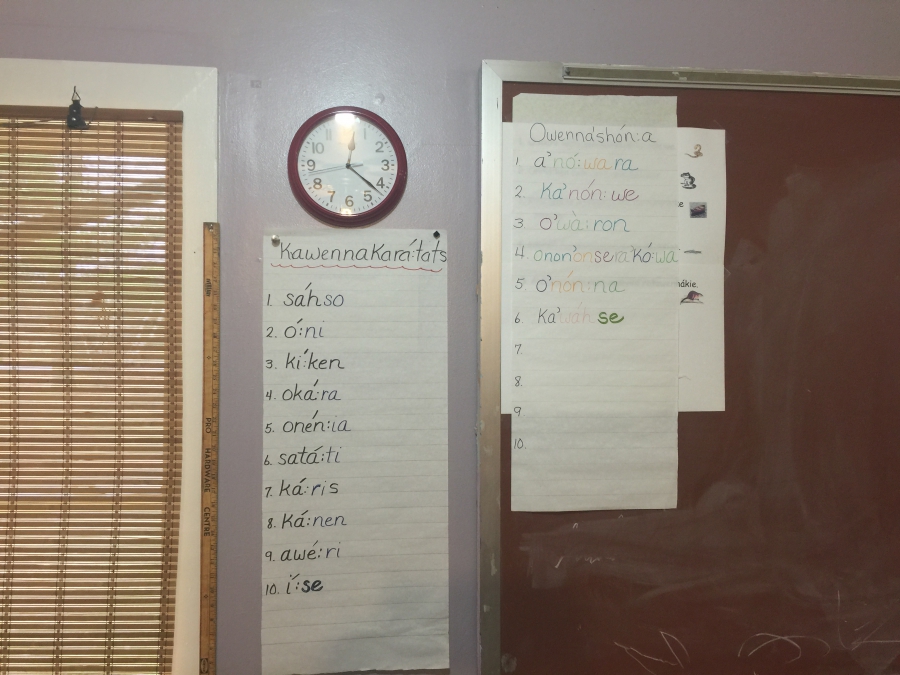 “The Akwesasne Freedom School—the word freedom—has to do with the freedom to think. And to be able to think, you need to be able to understand the language,” says Iakonikonhriiosta.

“I was one of the teachers, and I don't speak Mohawk. And there were several of us who didn’t speak Mohawk because we grew up in the public school system,” explains Peachy. “It was a heartbreak, actually, for us to make that decision to go total immersion, because I knew I wouldn't have a place here to teach anymore.”

Ultimately, as a parent, Peachy agreed with the decision to make the school a full immersion program. Peachy’s 10 children are graduates of the Freedom School.

“The Akwesasne Freedom School — the word freedom has to do with the freedom to think. And to be able to think, you need to be able to understand the language,” she says. “For us English speakers, we were able to say, ‘Yes, for our children, we think we should push that the language be number one.’”

Today, there’s a language gap between members of Peachy’s generation and the younger graduates of the Freedom School, one that students must grapple with.

“My parents don't speak Mohawk. I have some aunts and uncles that speak Mohawk, but not my parents,” says Tehonwenhniserathe.

Tehonwenhniserathe is a 17-year-old senior.  He started attending the Freedom School when he was 3. Today, he says he’s almost fluent. But maintaining fluency outside of school can be a struggle.

“You don't hear it a lot in common culture, so every time you leave, it's usually all in English,” he says.

Remember, Mohawk is still an endangered language, spoken by a minority of the tribe.

“But it makes me want to help more people to be able to speak,” says Tehonwenhniserathe. He says that after he graduates he already has plans to return — this time as a teacher.