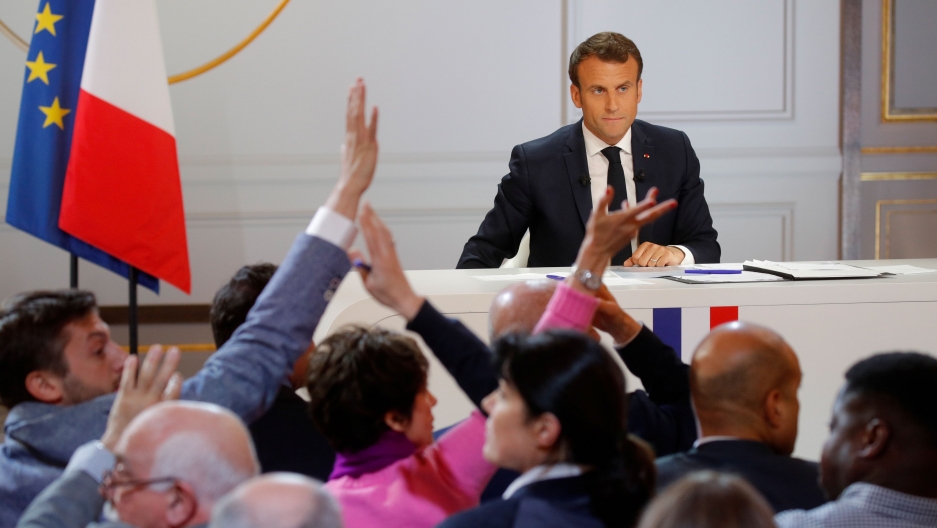 French President Emmanuel Macron gives a news conference after his speech unveiling his policy response to the yellow vests protest at the Elysee Palace in Paris, France, on April 25, 2019.

At the first major news conference of his presidency on Thursday, Emmanuel Macron pledged to cut taxes and said the French would have to work longer as he outlined his response to months of anti-government protests that have shaken his authority.

But his “grand-debate” speech didn’t satisfy everyone.

The 41-year-old president, a former investment banker and economy minister, said he wanted a significant cut in income taxes, saying it would be worth around 5 billion euros, financed by closing loopholes for some companies.

"I asked myself: Should we stop everything that was done over the past two years? Did we take a wrong turn? I believe quite the opposite," Macron said.

He spoke about a new push to decentralize government, with policy decided and directed from Paris. He said changes would come within a year, including no more schools or hospitals being closed without the backing of the local mayor.

“He talked about decentralization, but he didn’t talk about homelessness or the housing crisis or expensive housing,” Jean-Baptiste Eyraud, the spokesman for the Right to Housing Association in Paris, said in response to the speech.

Eyraud says that Macron hasn’t commented on the topic of homelessness since he was elected two years ago. Many people believe that he hasn’t lived up to his promise in 2017 to keep men and women off the streets. There are roughly 200,000 people without homes in France, according to a 2017 RTL report. The UN expects these figures to increase when the result of the next census is released in 2020, according to a preliminary report.

Housing prices and rental costs are on the rise. Shelters are at capacity.

Many families opt for living in temporary shelters, such as gymnasiums or at hotels. The UN report says that this doesn’t tackle the housing problem directly.

Related: Notre-Dame remembered as a gathering point for The World

Tensions with the government grew after more than 1 billion euros were raised for the Notre-Dame Cathedral after last week’s fire. Some French groups said the amount of donations highlights the state’s apathy to ongoing social issues.

“Unfortunately, we know that it’s easier to raise money for certain causes over others,” said Marie Huiban, one of the activists at the Right to Housing Association. “It’s been years since the state stopped financing the social housing budget.” 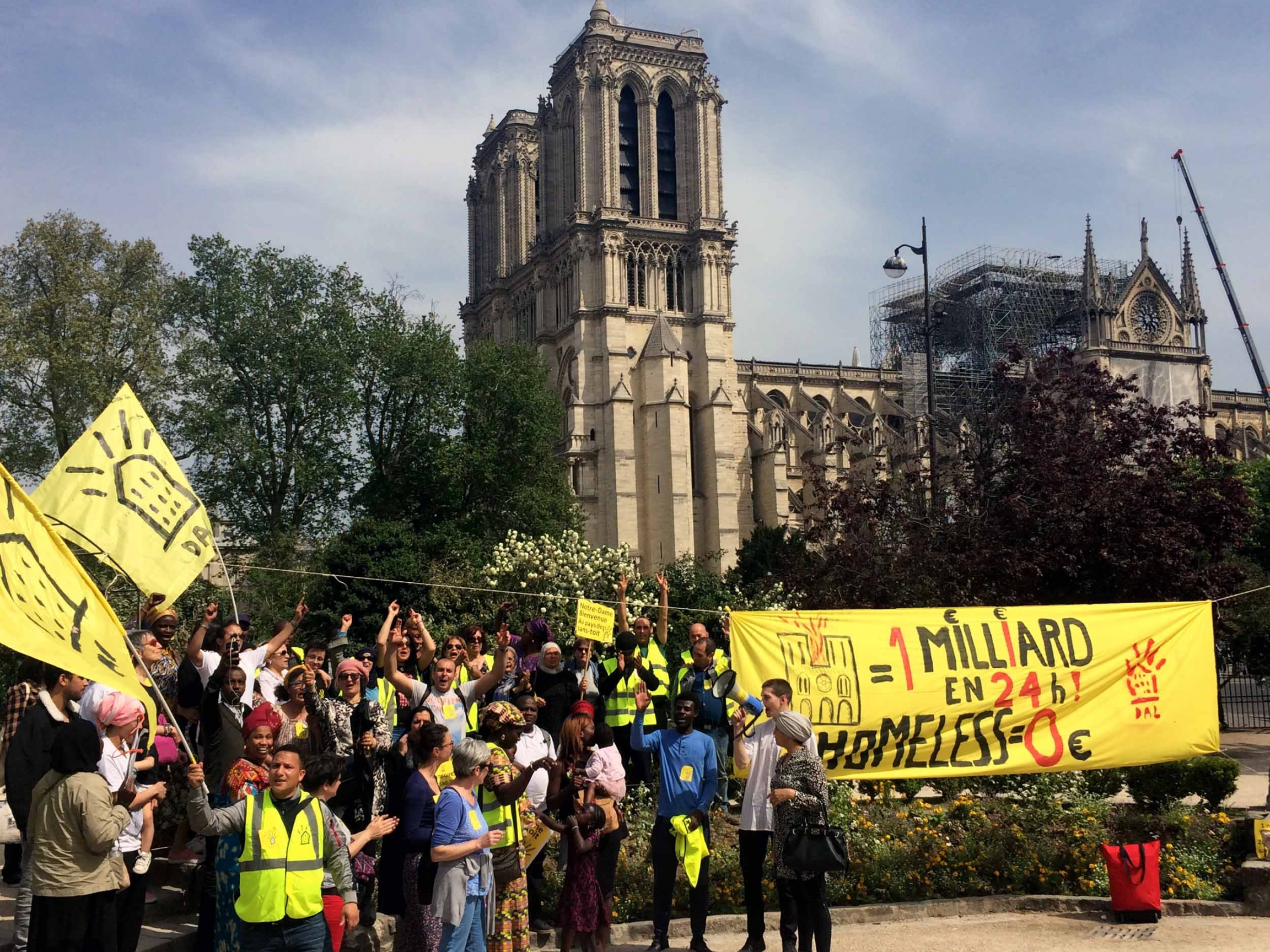 Protestors gathered at Notre-Dame with signs criticizing the money raised for the restoration of the cathedral but no money allocated to helping the homeless.

Courtesy of Right to Housing Association

On Monday, dozens of members of the housing association chanted and waved signs at the Notre-Dame Cathedral to highlight the issue of homelessness.

"One billion euros for Notre-Dame. Zero for homeless people," they chanted.

Some people were outraged over the suspicion that billionaires were donating to the cathedral to receive a generous tax cut. Under French law, individuals can deduct 66% of a charitable gift in their taxes, while businesses can deduct 60%.

Related: No sign of arson in Notre-Dame blaze as nation grieves

“One of the things France does not have is a tradition of private philanthropy. It’s not common to see businessmen put money into what might be considered in other times for the state to take care of. So, people are suspicious. They think there’s something behind it,” explained Sophie Pedder, the Paris bureau chief for The Economist.

The demonstration comes after a similar attempt by the gilets jaunes — yellow vests — on Saturday. The yellow vest protestors, however, were banned that day by authorities from going near Notre-Dame. After nearly six months of protests by the group, the sustained unrest has had a draining effect on business, tourism and the economy.

“Of course, there are issues with poverty and homelessness and housing," Pedder said. "There’s a huge strain on the housing supply in most big cities in France. But it’s not as bad as it is in some countries.”

France has a “right to affordable housing” law that prioritizes rehousing and accommodation for people in vulnerable housing situations, such as homelessness or domestic violence situations.

The DALO law, le Droit au Logement Opposable — or the Right to Affordable Housing — is the first of its kind in Europe.

But Huiban, and her colleague, Françoise Chiniard, say it’s not working.

Down the street from Notre-Dame, near Macron’s home in the Élysée Palace, 150 people are living inside a gymnasium, which serves as a temporary shelter. At least 40 of these people are homeless, while the rest of the families previously lived in substandard housing.

“There’s a lot of people who have been recognized as ‘priority-DALO,’ but they still haven’t been rehoused,” explained Chiniard.

Despite the criticism leveled at him, and opinion poll ratings that show his support at around 30%, Macron did not pull back from any policies Thursday, saying his government would push on with his reform drive.

The tax cuts come as France is trying to keep its budget deficit in check, while at the same time hoping to rid itself of a reputation as the world's most highly taxed country. Figures from the Organization for Economic Co-operation and Development (OECD) show France's “tax-take” is equivalent to 54% of gross domestic product.

Along with the tax relief, Macron said government spending would be squeezed and the French would have to work longer to build up social contributions, an announcement that is unlikely to be popular in a nation known for its 35-hour work week.

“I think that he does have a balanced policy,” said Pedder, author of “Révolution Française,” a biography on Macron. “But the perception is not that way. And because this perception has stuck that he’s acting on behalf of businesses, rich people and high earners  — these sorts of measures are somehow disregarded and seen as perhaps too little and perhaps too late. But I don’t think they’re seen as sincere, which I think is a misreading of what he’s trying to do.”

She points out that Macron has brought about measures such as “long-term social mobility and anti-poverty policy.”

“But that’s a long-term project,” Pedder said. “That’s not something anyone on the street is going to be thanking President Macron for now. I think the imbalance is partly because some of his, what you might call, ‘anti-poverty’ is about investing in education more long-term. It’s not about putting money in people’s pockets today.”

She pointed to his work on schools and education: Macron introduced a reform last year that would halve school class sizes, and this past week, he rolled out a plan that would give free breakfast to 100,000 children.

“What Emmanuel Macron is trying to do as president is invest in individuals’ capacity to improve their lives. And to do as good of a job as the state can to improve that environment for them,” Pedder said.

Chiniard and Huiban say they’re going to continue to organize protests to highlight the homelessness problem that they claim has gotten worse during Macron’s presidency.

“[We’re] not asking for charity,” said Chiniard. “We’re just asking for the laws to be enforced.”