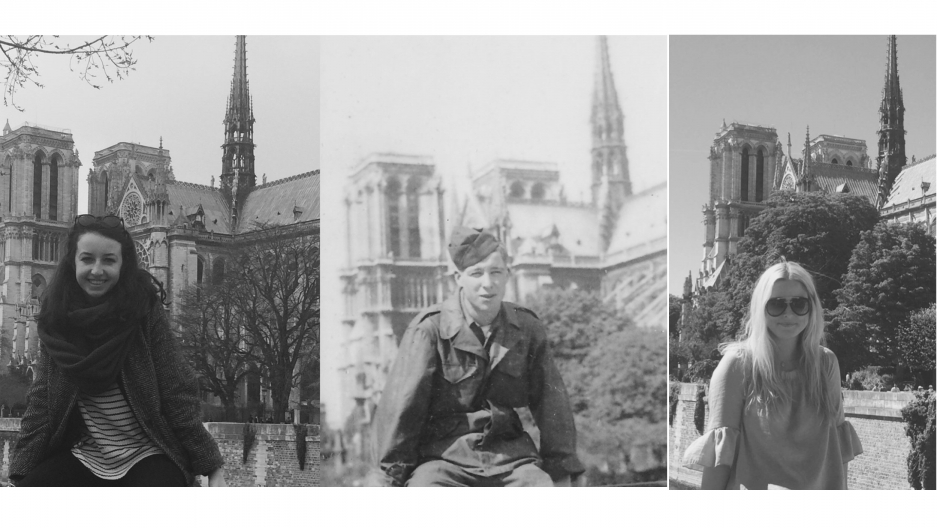 Grace Hynes' family has a tradition to recreate an image taken by Joseph Hynes while he was serving in the US Army during World War II. Grace, left, recreated her photo in 2016; her cousin, Madelyn Eagen, right, did so in 2017.

When Grace Hynes traveled to Paris in March 2016, she not only wanted to visit Notre-Dame. She also wanted to recreate an old photo of her grandfather, Joseph Hynes, posing in his military uniform in front of the Cathedral.

Grace’s grandfather, Joseph Hynes, was a technical sergeant with the 168th Engineer Combat Battalion in the US Army during World War II. He traveled to Paris while on leave, likely in 1945.

“He was on leave in Paris for a few days when he took this photo and talked about the city for the rest of his life,” Hynes told The World. “He passed away in 1983, before my cousins and I were born. As a way to honor him, whenever we are lucky enough to get to Paris, it’s now a tradition to try to recreate the photo.” 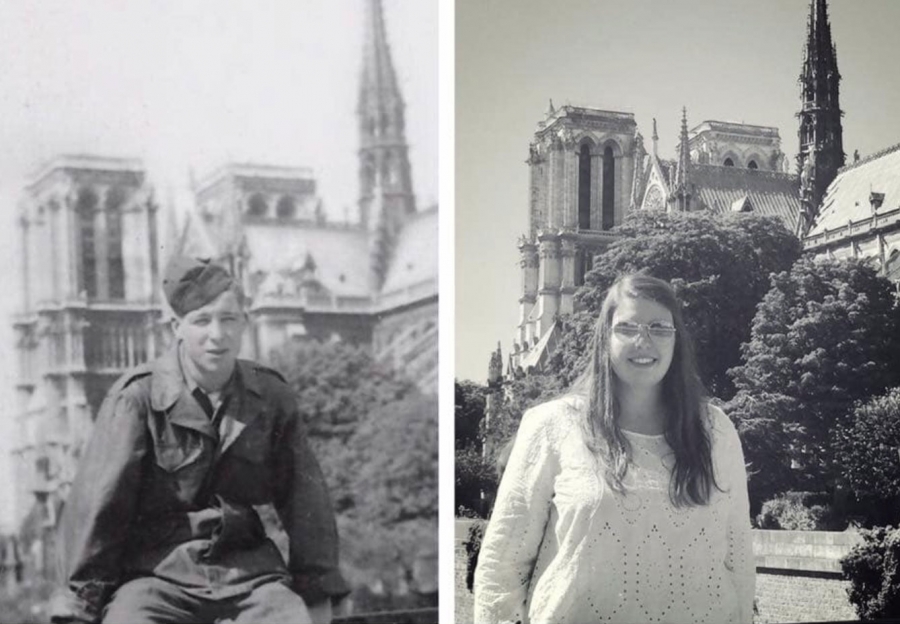 Cousin Alexis Eagen poses for her version of the Notre-Dame family tradition photo in June 2017.

Grace and her cousins grew up seeing this family photo on prominent display at her grandmother’s house in Buffalo, New York. Hynes was able to recreate her version of the family photo tradition three years ago.

Related: Why are we so moved by the plight of the Notre Dame?

In Paris, onlookers lined bridges over the Seine, some with tears in their eyes. Many people around the world mourned the damage on social media, including The World’s readers and listeners, who shared their photos and memories of visiting the centuries-old cathedral. 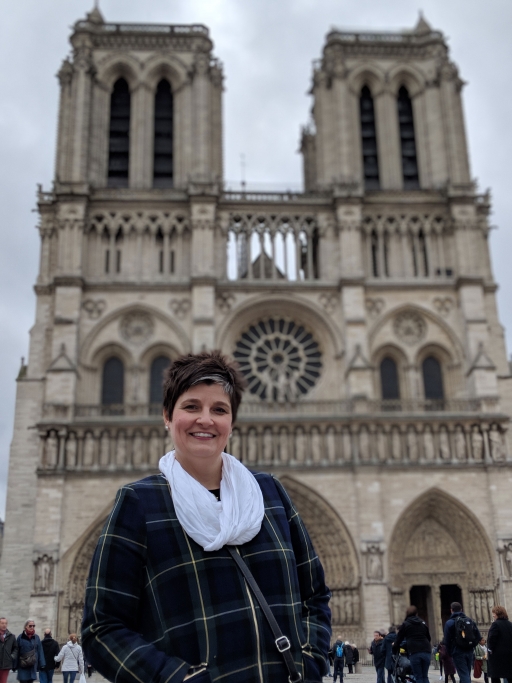 Sue Reynolds poses for a photo in front of the cathedral's towers during a visit in 2018. The facade and the towers were saved during Monday's fire.

For Sue Reynolds, seeing the flames engulfing the spire and the roof of the cathedral brought back memories of her visits over the past decade and how much the sight of Notre-Dame brought a sense of awe and connection to history.

“When you approach the Notre-Dame cathedral, you're overwhelmed with not only the architecture but the age of the structure, knowing that it goes back to 1100, and that people have gathered and worshipped there since that time,” Reynolds said. “You feel a part of that history. It's the history of Paris and in some ways the history of Catholics.”

Reynolds, too, has a special tradition when she visits Notre-Dame: she lights a candle in honor of her mother.

“My mother traveled to Paris decades ago with my sister during her elementary school French class and lit a candle in Notre Dame Cathedral,” Reynolds said. “And so, in 2013 I did the same in her honor.”

She did the same last year during another visit.

Construction on the cathedral began more than 850 years ago in 1163, though it continued to undergo modifications in the centuries that followed its primary completion by the mid-13th century.

Related: No sign of arson in Notre-Dame blaze as nation grieves

It has undergone several major restoration projects. Before Monday’s fire, the cathedral had been under construction to repair damages of weather and time, including renovations to the now-collapsed spire.

Marilyn Coté Miller visited Notre-Dame twice in the 1980s and 90s. Visiting Paris triggered her interest in architecture. Miller said she spent much of Tuesday looking at images of the ruined inside of the church.

“I think when you've been somewhere, it personalizes it for you — not only because it's so beautiful. But you can't help but feel the spirituality and to know that that is sitting there, in partial ruins now ... it just makes you sad," Miller said. "I'm very interested to follow what France is going to do to rebuild and restore. I've been drawn to the pictures today just looking at the inside of the cathedral and seeing the damage and it's heartbreaking.” 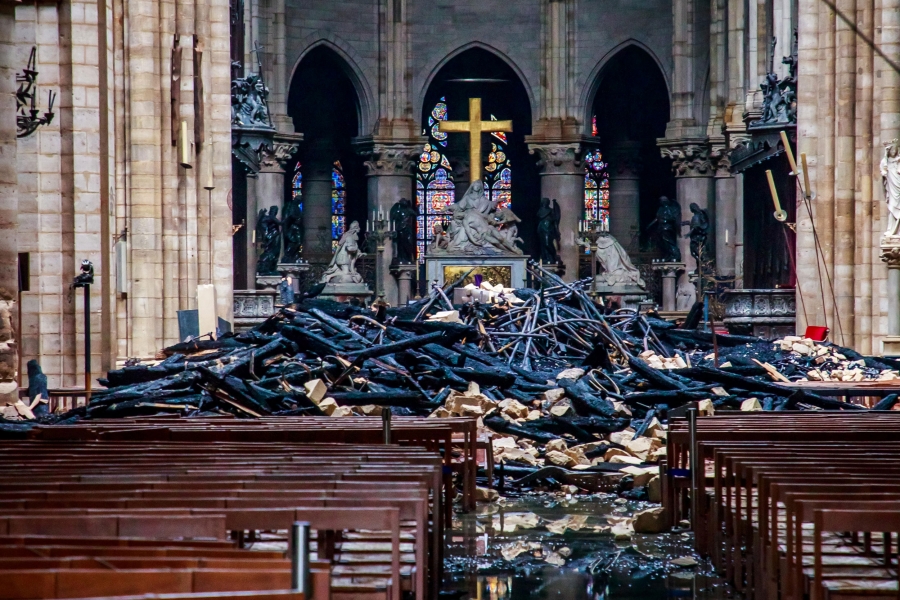 A view of the debris inside Notre-Dame in the aftermath of a fire that devastated the cathedral in Paris, France, on April 16, 2019. Much of the facade and the art inside was saved in the blaze.

Monday was not the first time the cathedral had suffered damage.

A fire broke out in the 13th century, and the building was desecrated during the French Revolution in the late 18th century. It had been largely left to ruin until writer Victor Hugo revived interest in the building with his novel, “The Hunchback of Notre-Dame,” published in 1831.

During World War II, fearing destruction by Nazi soldiers, the cathedral's famed stained glass was removed — in particular to protect the rose windows, which survived Monday’s blaze, as did the iconic bell towers.

Many other pieces of art also survived. A human chain of firefighters, police and municipal workers saved a centuries-old crown of thorns made from reeds and gold and a tunic believed to have been worn by Saint Louis, a 13th-century French king.

In less than 24 hours, more than 700 million euros have already been pledged to the rebuilding effort.

Despite the destruction and the uncertainty about reconstruction, Hynes said she hopes that other members of her family will be able to take a photo in front of a rebuilt Notre-Dame in the near future.

“The fact that it was saved brings me some hope that it can be rebuilt,” Hynes said. “And we, too, could be part of that part of rebuilding of something that we care for.”

Indra Ekmanis and Reuters contributed to this report.