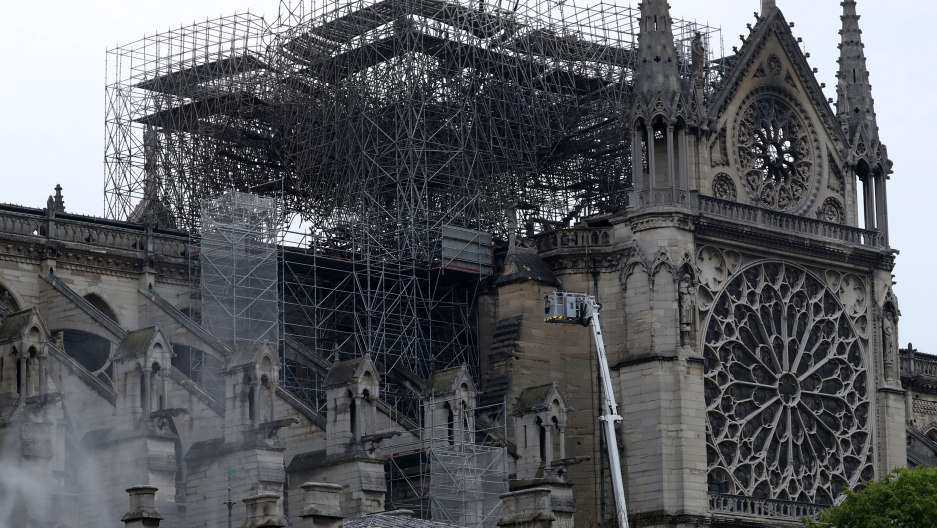 Firefighters continued working at Notre-Dame Cathedral in Paris on Tuesday after massive fire consumed the cathedral on Monday, gutting its roof and stunning France and the world.

French prosecutors said on Tuesday that the fire that tore through Notre-Dame Cathedral was probably caused by accident. The announcement came as France and people around the world grieved over the destruction at the iconic building.

More than 400 firemen were needed to tame the inferno that consumed the roof and collapsed the spire of the eight-centuries-old cathedral. They worked through the night to extinguish the fire some 14 hours after it began.

Paris public prosecutor Remy Heitz said there was no obvious indication the fire was arson. Fifty people were working on what would be a long and complex investigation. One firefighter was injured but no one else was hurt in the blaze which began after the building was closed to the public for the evening.

From the outside, the imposing bell towers and outer walls, with their vast flying buttresses, still stood firm, but the insides and the upper structure were eviscerated by the blaze.

Firefighters examined the gothic facade and could be seen walking atop the belfries as police kept the area in lockdown. 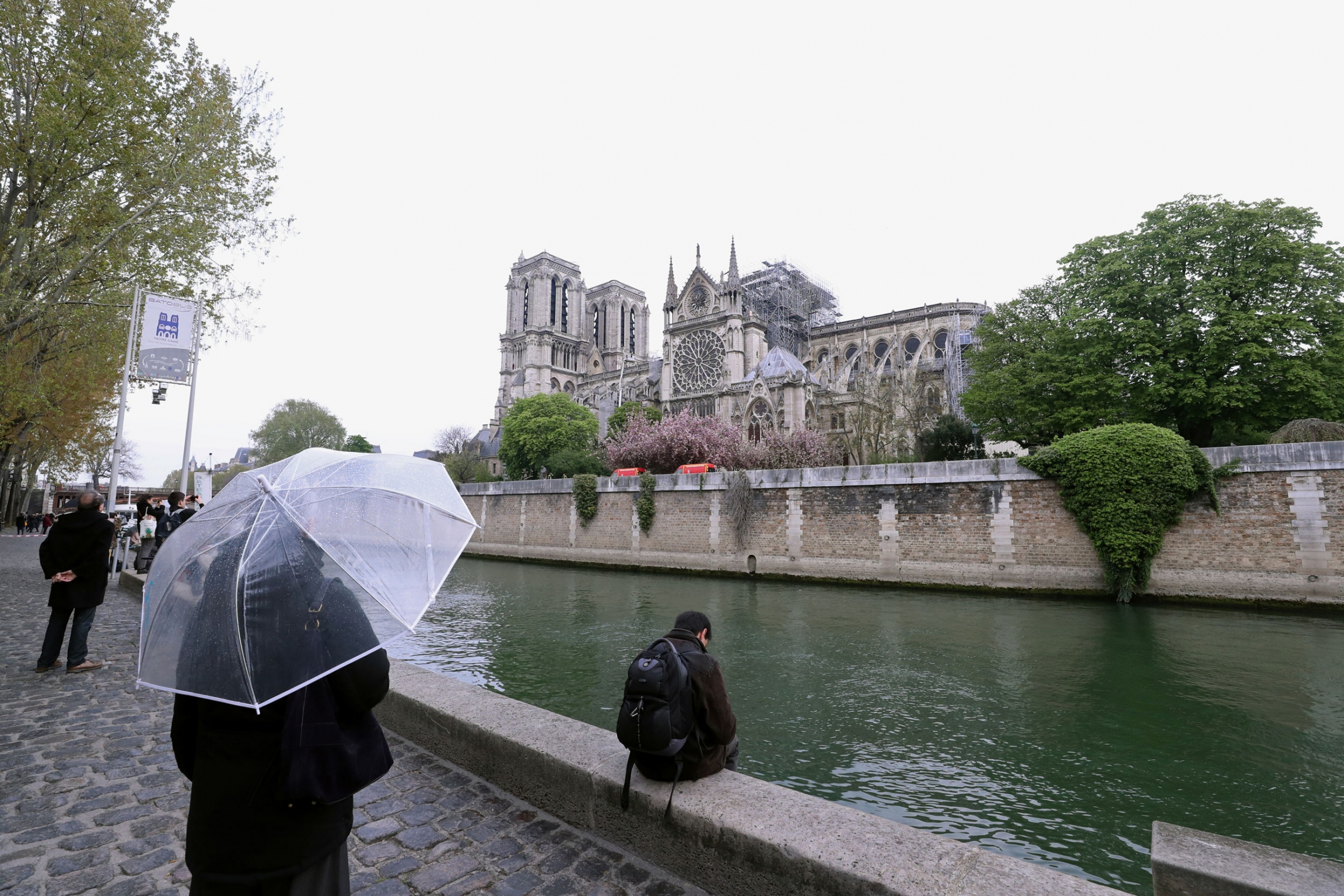 People look at Notre-Dame Cathedral after a fire devastated large parts of the gothic gem in Paris, France April 16, 2019.

Investigators will not be able to enter the cathedral's blackened nave until experts are satisfied its stone walls withstood the heat and the building is structurally sound.

"Our job today is to monitor the structure and its movements," said fire service spokesman Gabriel Plus.

The fire swiftly ripped through the cathedral's timbered roof supports, where workmen had been carrying out extensive renovations to the spire's wooden frame.

The Paris prosecutor has opened an investigation into "involuntary destruction by fire." Police on Tuesday began questioning the workers involved in the restoration, the prosecutor's office said.

Hundreds of stunned onlookers had lined the banks of the Seine river late into the night as the fire raged, reciting prayers and singing liturgical music in harmony as they stood in vigil.

It was at Notre-Dame that Napoleon was made emperor in 1804, Pope Pius X beatified Joan of Arc in 1909 and former presidents Charles de Gaulle and Francois Mitterrand were mourned.

Messages of condolence flooded in from around the world.

Pope Francis, the leader of the Catholic Church, was praying for those affected, the Vatican said, adding: "Notre-Dame will always remain — and we have seen this in these hours — a place where believers and non-believers can come together in dramatic would always remain a symbol of French national unity."

Notre-Dame is owned by the state. It has been at the center of a years-long row between the nation and the Paris archdiocese over who should finance badly needed restoration work to collapsed balustrades, crumbling gargoyles and cracked facades.

It was too early to estimate the cost of the damage, said the heritage charity Fondation du Patrimoine, but it is likely to run into the hundreds of millions of dollars. 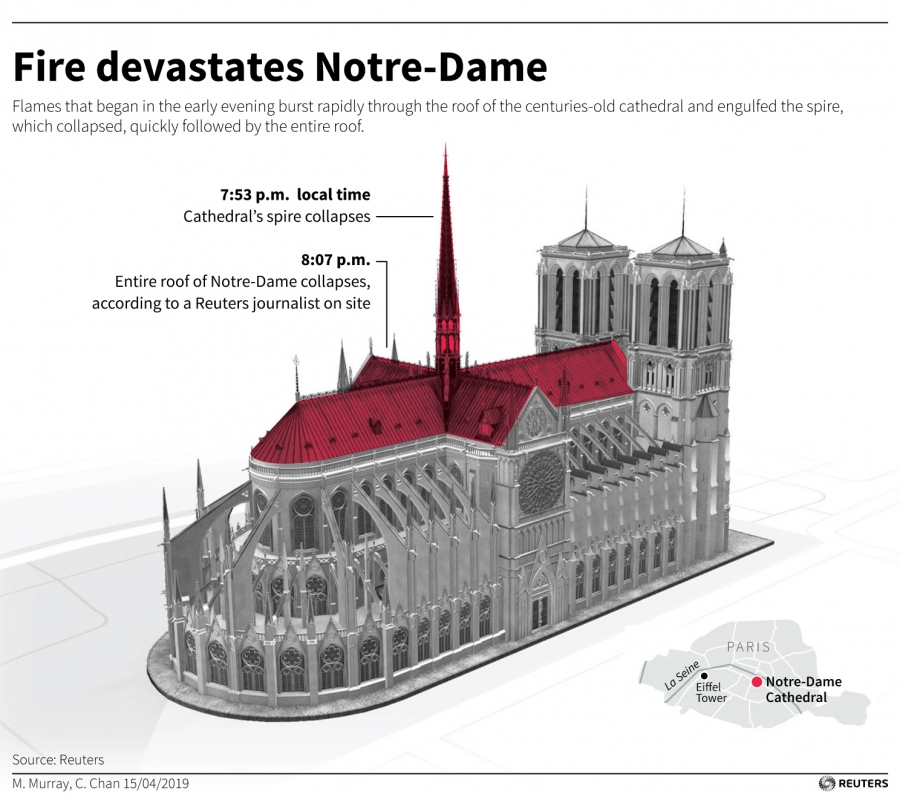 Paolo Violini, a restoration specialist for Vatican museums, said the pace at which the fire spread through the cathedral had been stunning.

"We are used to thinking about them as eternal simply because they have been there for centuries, or a thousand years, but the reality is they are very fragile," Violini said.

The company carrying out the renovation works when the blaze broke out said it would cooperate fully with the investigation.

"All I can tell you is that at the moment the fire began none of my employees were on the site. We respected all procedures," Julien Le Bras, a representative of family firm Le Bras Freres.

Officials breathed a sigh of relief that many relics and artworks had been saved. At one point, firefighters, policemen and municipal workers formed a human chain to remove the treasures, including a centuries-old crown of thorns made from reeds and gold, and the tunic believed to have been worn by Saint Louis, a 13th century king of France.

"Notre-Dame was our sister, it is so sad, we are all mourning," said Parisian Olivier Lebib. "I have lived with her for 40 years. Thank God that the stone structure has withstood  the fire."