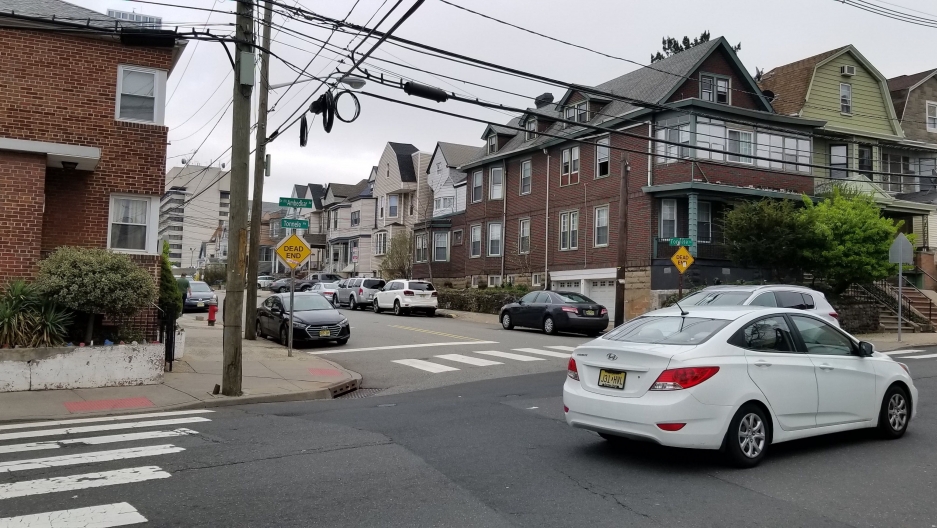 The small sign for Ambedkar Avenue is easy to miss, but it holds enormous significance for Dalit Americans who are asserting their identity.

This series was produced in partnership with the Pulitzer Center.

There’s a short stretch of road in the “Little India” section of Jersey City bearing a name unfamiliar to most Americans. But for some Indian Americans, Ambedkar Avenue is almost a pilgrimage spot, for it commemorates their greatest hero — and one with an American connection at that.

BR Ambedkar led one of the greatest civil rights movements in human history, working to establish basic rights for hundreds of millions of people, known as Dalits. Dalits were the lowest level of the Hindu caste system, essentially without caste, or “outcaste,” often described by the offensive term "Untouchable."

It sounds incredible, but Ambedkar did a lot more than lead the Dalits to liberation — he was also a hero in the movement for Indian independence from Britain and fought just as hard for the rights of women and the impoverished.

Ambedkar was the primary author of the modern Indian constitution, adopted in 1950, which enshrined fundamental human rights for all and made caste discrimination illegal.

Despite the law, and modern Hindu efforts to reimagine the ancient varna system that kept the Dalits underfoot, caste prejudice has persisted — not just in India, but among the Indian diaspora here in the United States.

“I was one of the first Dalits that was ‘out’ in the country, and I faced an incredible amount of discrimination; I faced rape threats; I faced death threats.”

Thenmozhi Soundararajan is the executive director of Equality Labs, a Dalit research organization based here, and a Dalit American herself. She says the situation is bad enough that a lot of American Dalits try to keep their caste status in the closet, often by not sharing their family name, which provides other Indians information on their caste background. “I was one of the first Dalits that was ‘out’ in the country, and I faced an incredible amount of discrimination; I faced rape threats; I faced death threats.” In spite of that, Soundarajaran says she’s optimistic about the next generation of American Dalits, based on the response to the Equality Labs survey. More are “coming out of the closet,” she says, and she looks back to Ambedkar Avenue as one of the first literal signs that American Dalits were asserting their identity.

“When the street was established, there were not very many [Dalits] that were out … what was so special about it was that only someone who’s [from an] oppressed caste would go through the effort to try to file to get a street in after Ambedkar. But they did it, and I think it's this very special, secret knowledge of oppressed people that someone lifted up into the American consciousness.”

Mayuri Avacharmal is a scientist in New Jersey who goes out of her way to drive down Ambedkar Avenue. Like many Dalits, she has embraced Buddhism, following the lead of Ambedkar, who converted before he died in 1956. “We share the same kind of belief,” Avacharmal said. “For us, Dr. Ambedkar, and Lord Buddha, we are followers.” Buddhism offers a spirituality unencumbered by the caste system, and Ambedkar’s vision encompassed both spiritual and political liberation. Avachamal says it’s impossible to overstate his importance. “Before Ambedkar, we were not aware of our rights. We were treated like shit in India. We were called Untouchables. No one was touching us. No one wanted to eat with us; we were treated like we were no one in society. … He uplifted us. He fought for us. He gave us the right of knowledge, to study. And now we are in the US … because of him.”

“I’ve taken so many Indians who come to visit New York, they’ll go to Columbia to see the Ambedkar statue, and they’ll go to the street to see that he’s part of the natural fabric of the city. So that, to me, is amazing.”

Ambedkar’s connection with America is actually older than the Indian diaspora now living here. He lived for a time in New York and got an economics degree from Columbia in 1927. There’s even a statue in his honor on the campus. Thenmozhi Soundararajan has made it part of her Dalit tour of New York City — along with Ambedkar Avenue. “I’ve taken so many Indians who come to visit New York, they’ll go to Columbia to see the Ambedkar statue, and they’ll go to the street to see that he’s part of the natural fabric of the city. So that, to me, is amazing.”

Dalits across the world celebrate Ambedkar’s birthday on April 14, and for some, the celebration and commemorations last the entire month. On Ambedkar Avenue though, there was no parade, nothing to give any a sense that this was anything other than an ordinary street on an ordinary day. But for American Dalits like Soundarajaran, that’s the beauty of Ambedkar Avenue: every day, drive-by inspiration.

“When I see it, I'm reminded that I exist, that I am a crucial part of the American fabric. … There are so many people that want to join the battle against caste; it's not just caste-oppressed peoples anymore; it's the world. And I think that street is just a small part of that process. And so, for that, I’m filled with a great level of love and joy.”