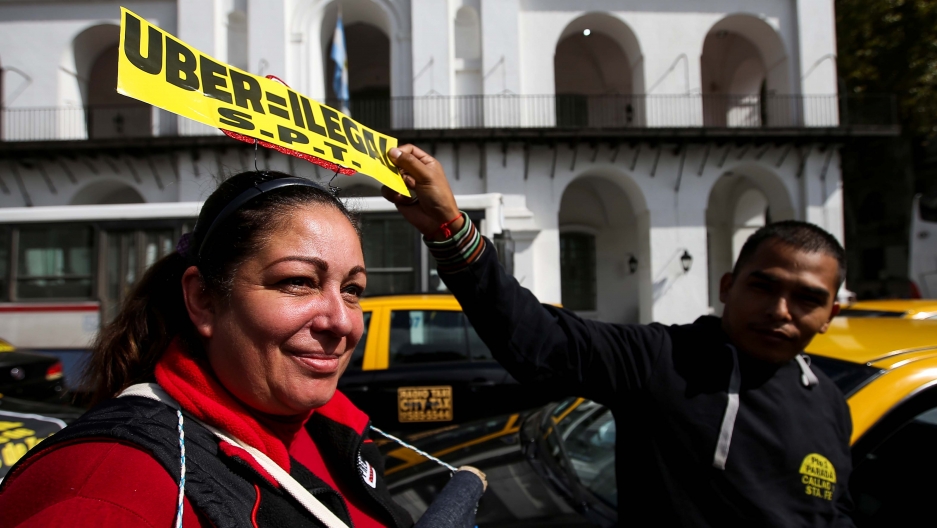 Thousands of taxi drivers snarled traffic in the center of Buenos Aires on Thursday to protest the threat to their business from Uber, in the latest reminder of the headaches the ride-hailing platform faces worldwide as it prepares to go public.

With blaring horns, members of Argentina's powerful taxi unions drove their yellow-and-black cabs or marched through the capital at the start of a planned two days of protests.

Uber plans to make its initial public offering registration public later on Thursday, Reuters reported earlier this week. People familiar with the matter said it will seek to sell around $10 billion worth of stock, which would make it one of the largest tech IPOs of all time.

The Buenos Aires protest underscores frustration among the city's taxi drivers, who charge that Uber undercuts them on price, helping steal away consumers with competitive fares.

Also: Legal abortions remain elusive in Argentina, especially for the most vulnerable

In Latin America, as in other regions, Uber faces regulatory hurdles where it often operates in a legal grey area.

In Latin America, as in other regions, Uber faces regulatory hurdles where it often operates in a legal grey area. It also must contend with rivals, including Chinese ride-hailing giant Didi Chuxing, and pressure to cut driver subsidies to bolster profits.

"I see the biggest threats outside of competition being from regulation and a potential backlash against Uber as payouts to drivers continue to fall," said Nathan Lustig, managing partner of Magma Partners, a Latin America-based venture capital fund.

Argentina's capital lacks a specific regulatory framework for Uber, but the firm maintains it obeys the country's laws and pays taxes, and wants cities to pass ride-hailing regulations.

The company says other Latin American markets, including Mexico City in Mexico, Rio de Janeiro and San Pablo in Brazil, and La Paz in Bolivia, have passed laws in its favor enabling the use of apps for transporting passengers.

Lawmakers in Buenos Aires have largely sided with domestic taxi drivers, most of whom are unionized, who say Uber has an unfair competitive advantage because of its lower prices.

To counter this, the city government has levied fines and thrown up obstacles, such as an injunction by a judge that disallowed the use of some Argentine credit cards in Uber transactions in Buenos Aires.

Uber drivers have been the target of violent attacks by so-called "caza Ubers" or "Uber hunters."

Still, Argentina has been the fastest-growing market in the world for Uber since it started operating there in 2016, despite the country's recession, company data reviewed by Reuters shows.

That success has angered the city's taxi unions, who claim demand for taxis has been cut in half since Uber's arrival. Taxi drivers protesting on Thursday carried signs calling Uber illegal and its customers "corrupt."

Uber drivers have been the target of violent attacks by so-called "caza Ubers" or "Uber hunters." It is common in Buenos Aires for Uber drivers to ask passengers to sit in the front seat to avoid drawing attention from local taxi drivers.

Other protesters also blamed the authorities for not creating jobs.

"The big problem is that this government, by leaving people unemployed, continues to shrink the labor market and more people look to Uber as a job," Enrique Gutierrez, 56, a taxi driver for 35 years, told Reuters as he protested.

Uber said it supports regulations that expand the benefits of its technology.

"The response and the choice of the people is clear," the company said in a statement to Reuters.

On Wednesday, an Uber passenger was killed in a traffic accident in greater Buenos Aires. The company said in a statement it had activated its accident insurance protocols, which are available to all rides requested through its app.