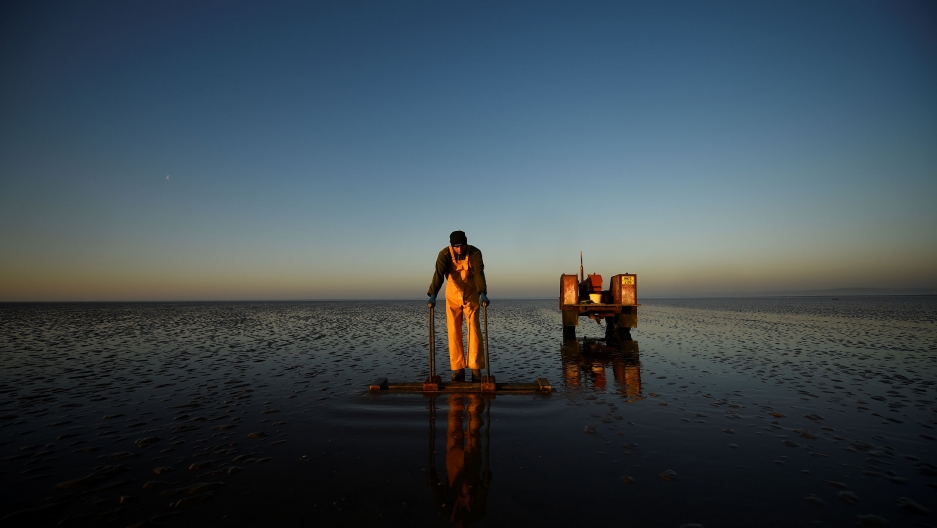 Cockle-picker and fisherman Tony McClure, 39, who voted to leave the EU uses his cockling board to raise cockles from the sands in Flookburgh, Morecambe Bay, Britain .

The thing about an old rusty tractor, said cockle-picker Tony McClure, is that even in the sea air, it will start.

His was parked out on the tidal flats of Flookburgh sands in Morecambe Bay in northwest England, braving the salty shallows of an unusually warm February dawn. He was comparing old mechanical tractors to the more modern electronic kind, and I was well aware of what he was talking about. The tide here comes in fast: If you're not careful, it can swamp a vehicle. So you want be certain to get off that seabed.

McClure 39, was one of the first people I met on a February-March assignment around England's coastline, where I was photographing and talking to people who had voted to leave the European Union. 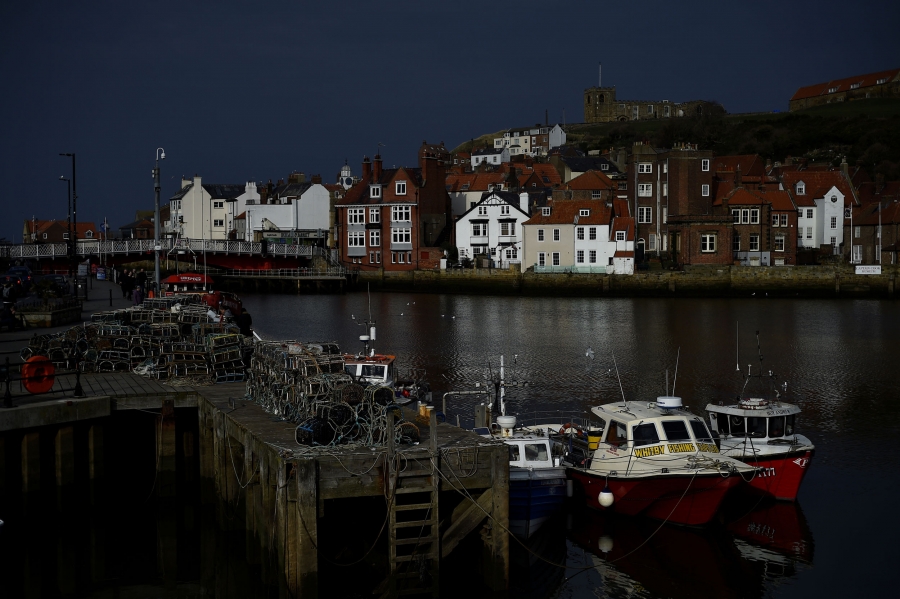 Tour boats are docked in the port of Whitby.

Like most of the 50 or so people I met and spoke to while traveling from Morecambe to St. Agnes in Cornwall, McClure wants Britain to get out of the EU.

Most spoke as if they felt tricked by Brussels and trapped in a world that was turning against them.

"They've wound us in their little web, with their laws and suchlike as that, and they rule us," said John Eldin, a 77-year-old on the eastern coast. 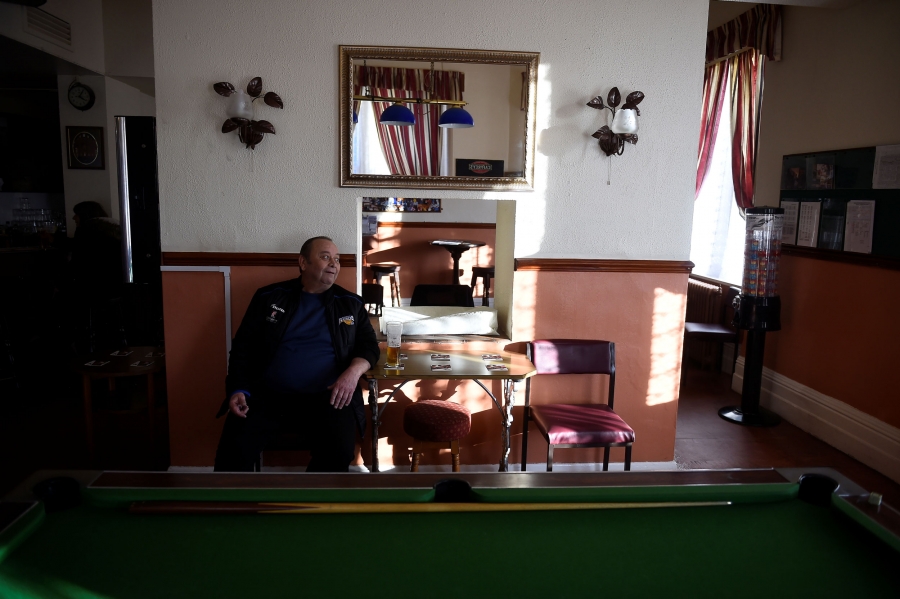 Brown drinks a pint of beer.

"They block anything that we want," said Tony Brown, 59, having a pint in Barrow-in-Furness.

"Over the last couple of decades we have been assimilated into something we didn't agree to be part of," said Tom Morris, a 34-year-old drag queen in Brighton, who voted Leave.

I'd embarked on the journey because, looking at the UK from Ireland, I'd noticed something about the coastal areas. The overall result of the 2016 referendum on leaving the EU was tight (51.89 percent voted Leave versus 48.11 percent Remain), but on the coast, the Leave vote had been particularly strong — Leave won a majority in more than 100 of about 120 parliamentary constituencies with a coastline. I wanted to know more about the people who delivered that result. 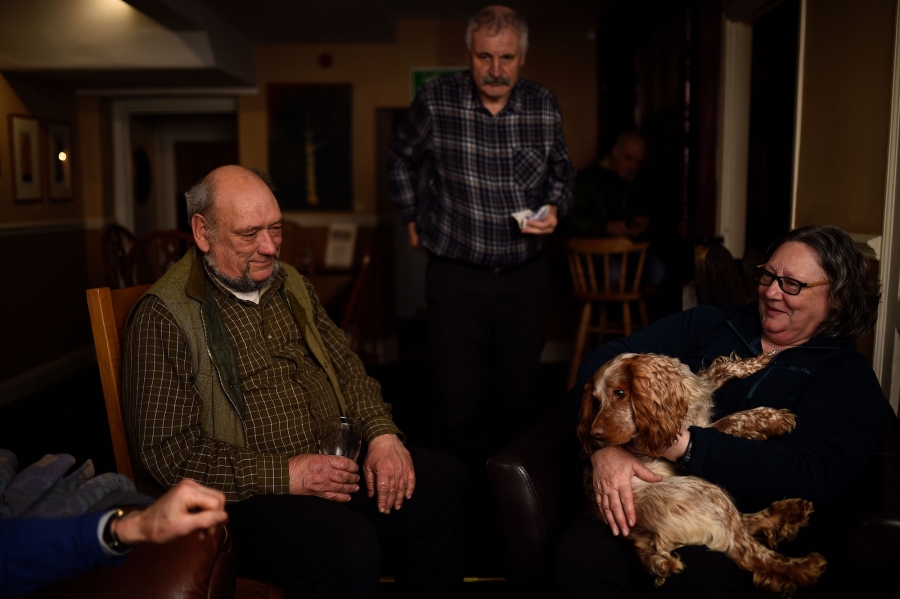 Andy Clarke, a retired Fisheries officer in the Environment Agency who voted to leave the EU, has a pint of ale with his friends. "I think we should have been out 18 months ago after the vote. My biggest beef with the EU is fisheries policy and the farming policies. I think they have done a lot of damage to the environment. Putting dead fish back in the sea was always ridiculous. We get it back into our own hands and can police it properly," Clarke said.

The trip was a revelation. First, people were often surprised to be asked their views, saying they felt they weren't important enough for anyone in London to ask. People plied me with tea, biscuits and sandwiches, took me on tractor rides and to the bingo and made a few jokey marriage proposals. Most said they still wanted to get out of Europe.

Their reasons were more individual and varied than I expected. Some wanted to revive a nostalgic rosy past or keep immigrants out. Some thought they were taking back control, some wanted an end to the EU bureaucracy that they saw hurting their livelihoods and some — like a cockle-picker in Flookburgh — thought it was time London paid attention to smaller voices.

But others had more concrete goals: A grandmother in Skegness hoped that the decline of her town — designated the "most deprived seaside area in Britain" in a study by the Office for National Statistics in 2013 — might be slowed down if taxpayers' funds stopped heading to Europe. 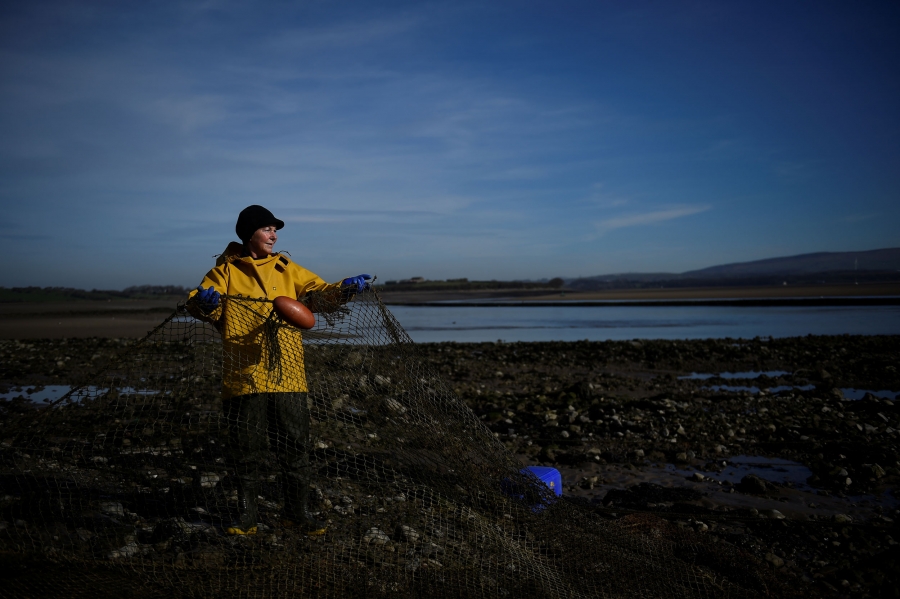 Owen takes in her nets.

"We need to stand on our own two feet, we're a capable country," she said. "The people that we trusted in and that we voted for, and that we thought could carry our hopes and dreams through, have let the whole country down."

Among the few Brexit dissenters I met was Chris Baker, a 51-year-old web designer and massage therapist. Like most people in Brighton, he voted Remain. Europe has been "the greatest peacekeeping arrangement that we've had for a very long time," he said.

It was the off-season and as I arrived on the east coast, a storm was on the way. 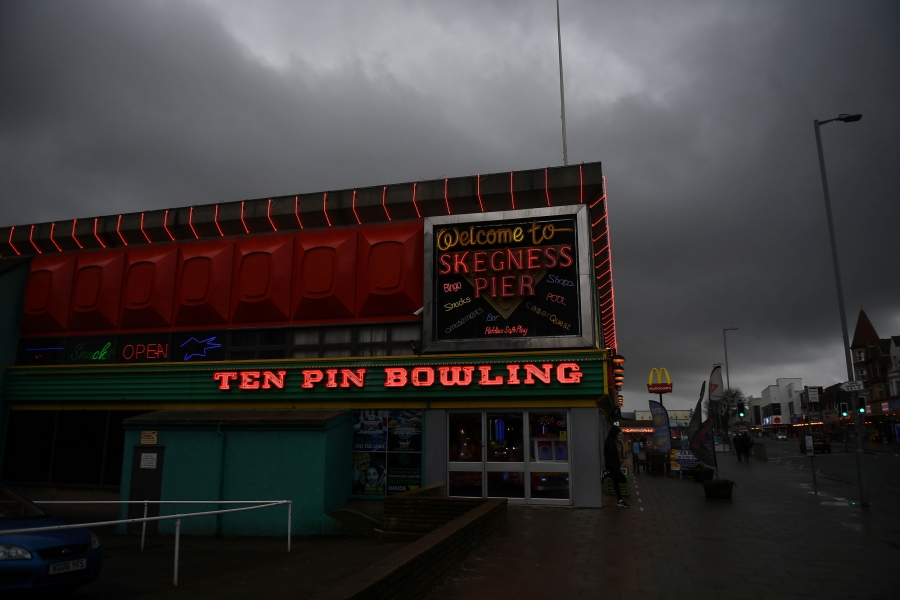 A Ten Pin Bowling sign is illuminated on the side of an amusement arcade in Skegness.

Seaside towns are notoriously seasonal but people living in towns on England's coast are more likely than average to suffer from deprivation, a government study from 2015 found.

From the rusting remains of Redcar's steelworks to the windswept skeleton of a fairground shut for the winter in Skegness, people I met said that all they wanted was to find a way to make a living. 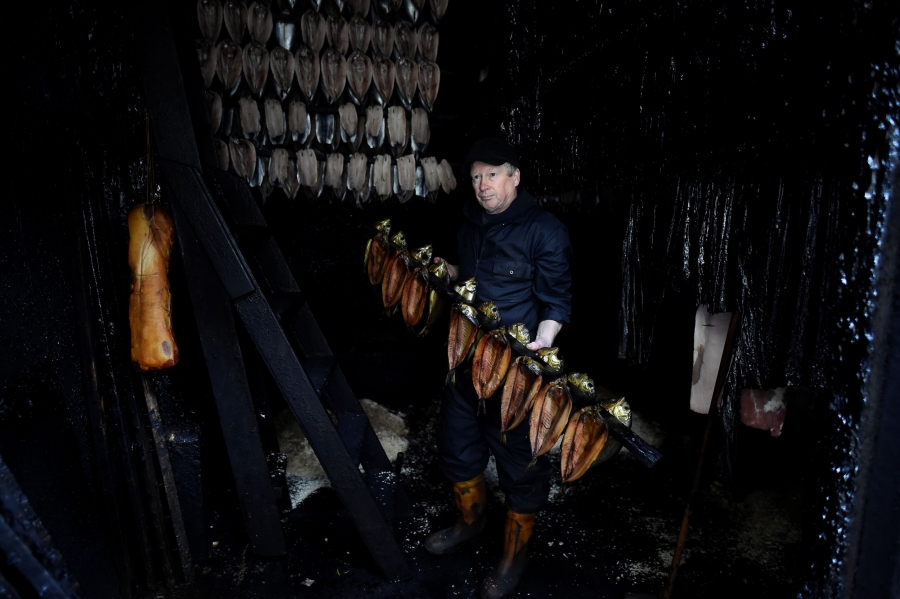 Brown holds some kippers in the smoking room.

In Whitby, a picturesque town whose fishing industry has largely given way to tourism, kipper smoker Derek Brown held up some herring and pointed out that none of the fish he used were locally caught. For the past 30 years or so they have all been imported from Norway and Iceland. The smokers "defrost them overnight" he muttered, as if passing on a secret recipe. 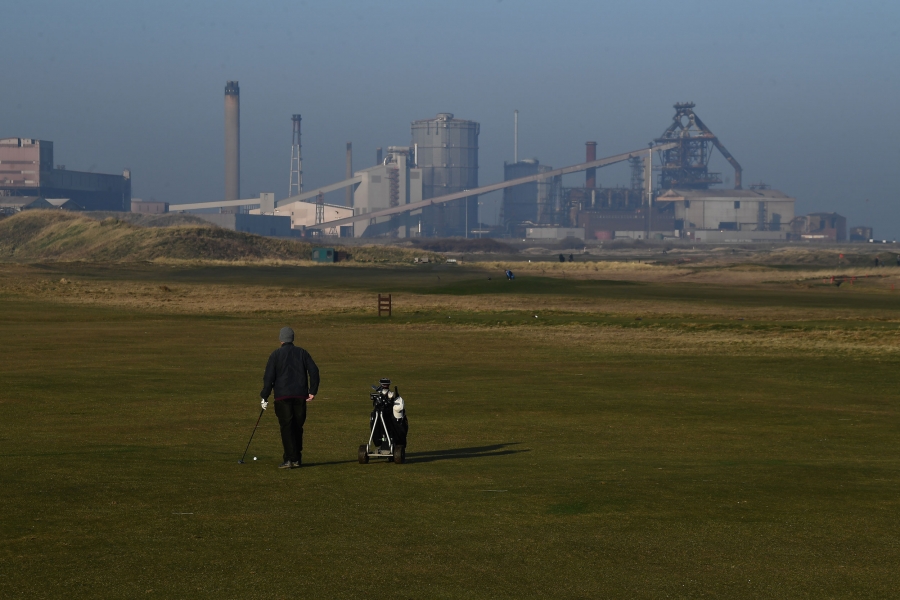 A man plays golf in front of a closed-down steelworks plant in Redcar.

In Redcar, oil tankers passed along the coast. A handful of golfers were out on the links, but in town, places were closed down, door after door. Those shops that weren't closed were bargain pound shops, charity shops, a pie shop, a sweet shop.

And a shoe shop - with a sign in the window saying there was a clearance sale. 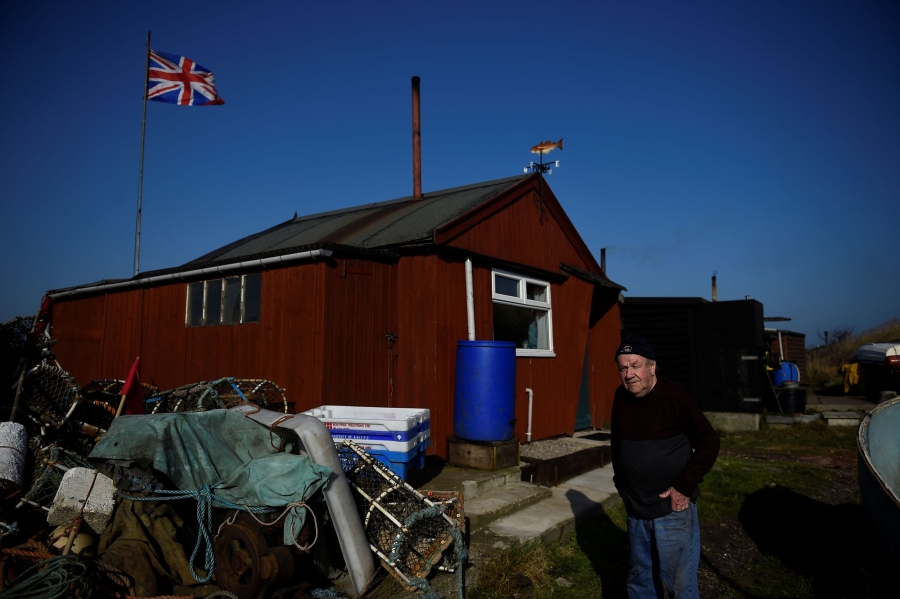 Mohan walks by fishing huts including his own in Redcar.

Redcar's steelworks closed down in 2015. "There's no work around here," said John Mohan, a 73-year-old who spent 40 years at the steelworks. "No nothing now. They're gonna pull all that down shortly, all the works."

The liveliest spots along this stretch were amusement arcades - brightly lit halls filled with gaudy game machines. People, some of them carrying plastic buckets rattling with coins, would go inside. Peering in, I saw punters slot two-pence-piece after two-pence-piece into the equipment, almost robotically. 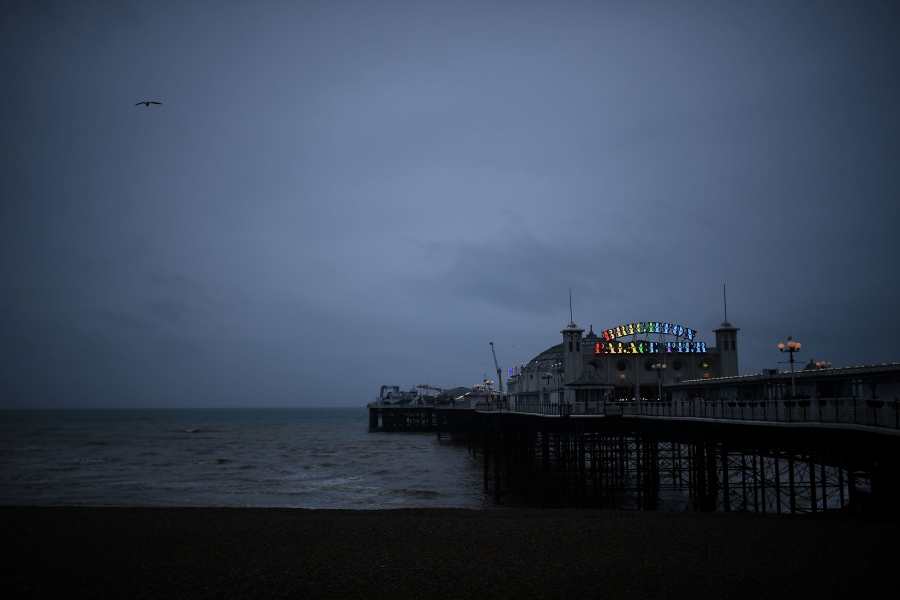 The Brighton Palace Pier sign is illuminated with rainbow colors.

By the time I reached Brighton, the storm - called Freya - had hit land.

Waves crashed upon the pier, one of the top UK attractions in 2017, but largely shut for winter. I drove past empty playgrounds into the gloom.

Brighton is a much wealthier spot than the east coast. Its residents make more money than the national average. And most of its residents voted to stay in the EU. 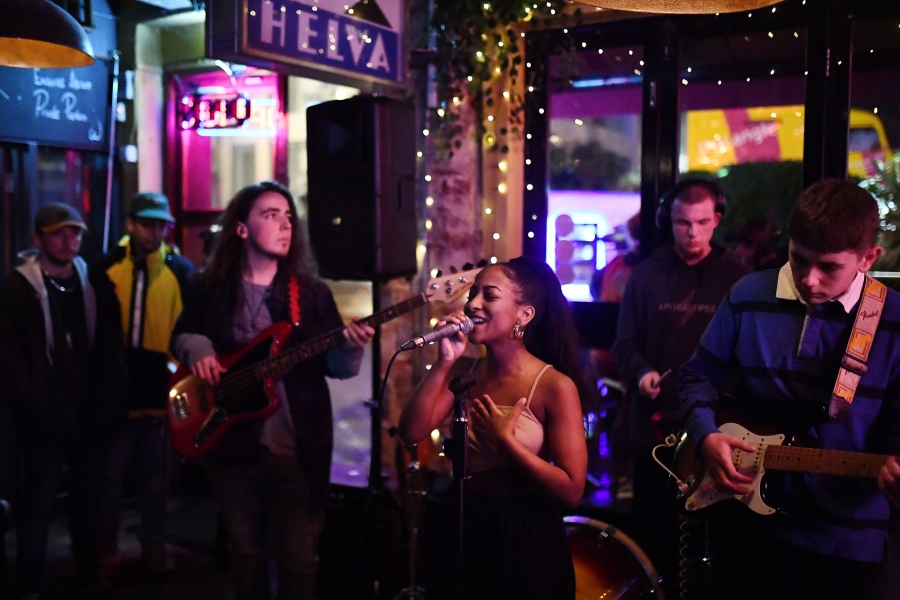 Lisa Lo sings in the Western Bar in Brighton.

The pier was lit up in rainbow colors, in homage to the town's aspiration to be a "gay capital." It's been a free-and-easy place even since the 18th century: According to Brighton museum, Jane Austen sent one of her young characters to the town as a place where she could be "tenderly flirting with at least six officers at once." On a winter's Tuesday in 2019, "open mike" night in the Western Bar was lively.

Remain voter Chris Baker was worried about the hardening tone of debate in the UK.

"I think we've seen a lot of the negative stuff already, with people acting out against foreigners, and we'll get more of that," he said. "We've seen some impact of people not coming here - you know, a shortage of nursing, and soon a shortage of people picking vegetables and all those summer-type jobs that English people don't want to do." 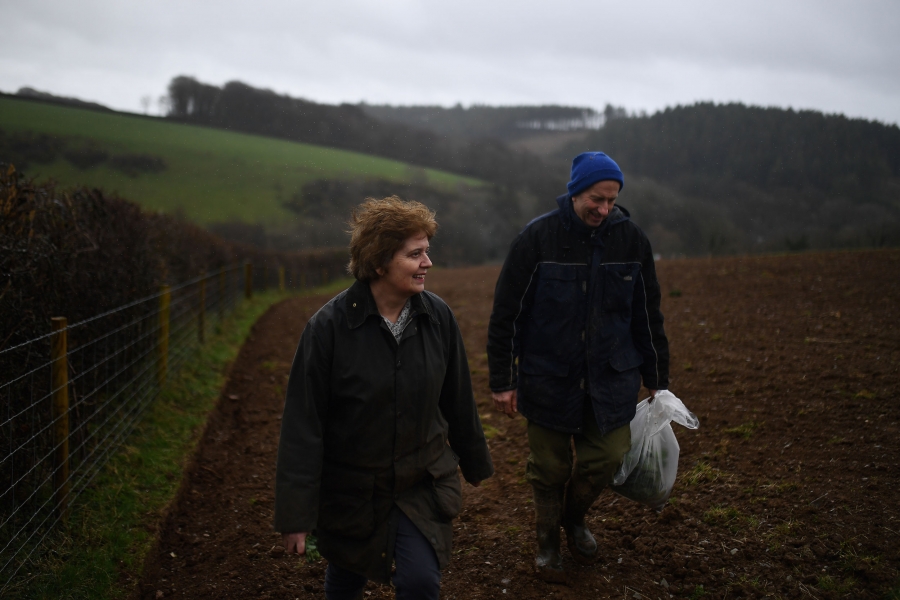 Helen and Andrew Arnold walk through their brassica and sheep farm.

In Cornwall, I met a farming couple, Andrew and Helen Arnold, who'd only recently told each other they voted on opposite sides in the referendum. She wanted to Leave, he voted Remain.

Over tea and homemade cakes in their cozy kitchen, she asked him why he chose to stay in Europe: "I don't like change," he said. 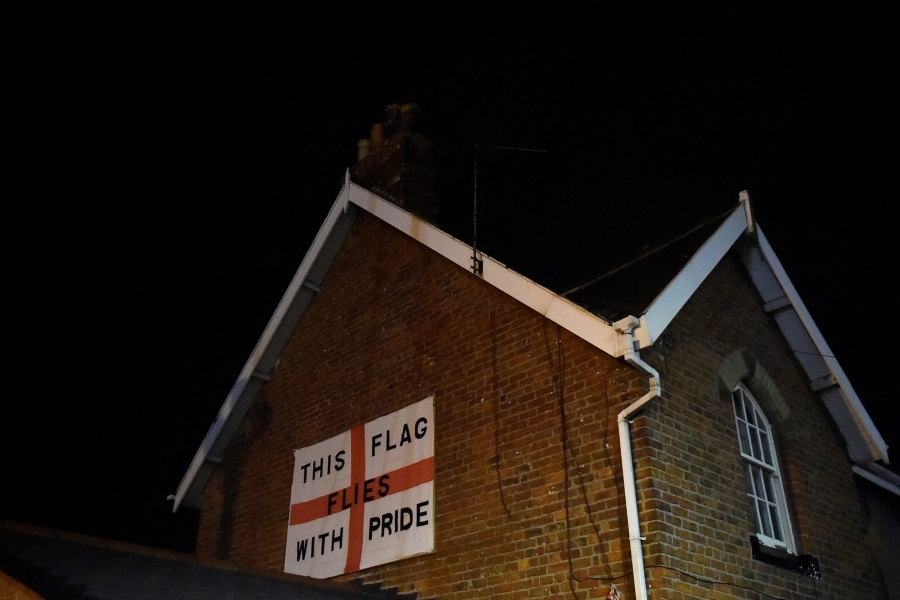 An England flag bearing the words: 'This flag flies with pride' is affixed to the side of a house in Redcar, Britain. 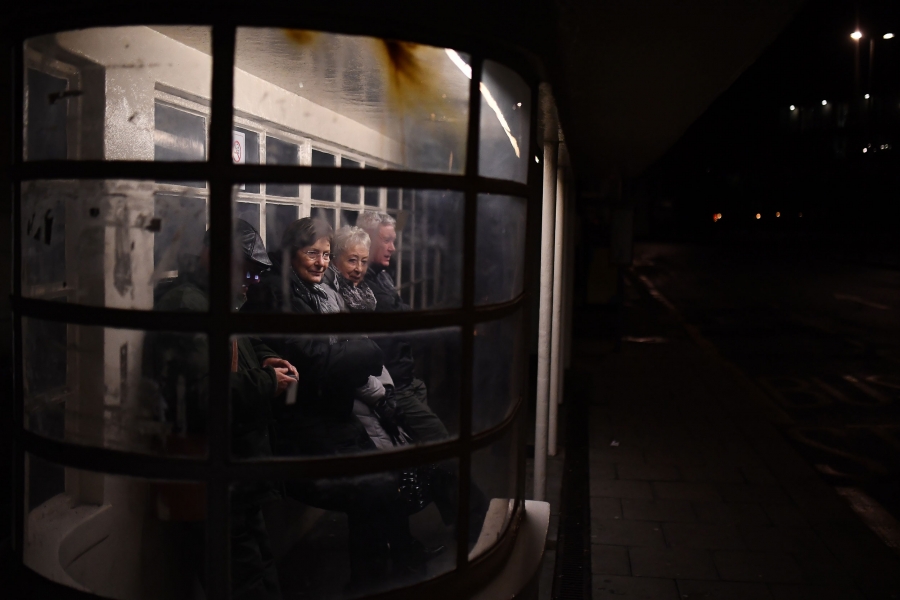 People wait at a bus stop at night in Brighton, Britain.