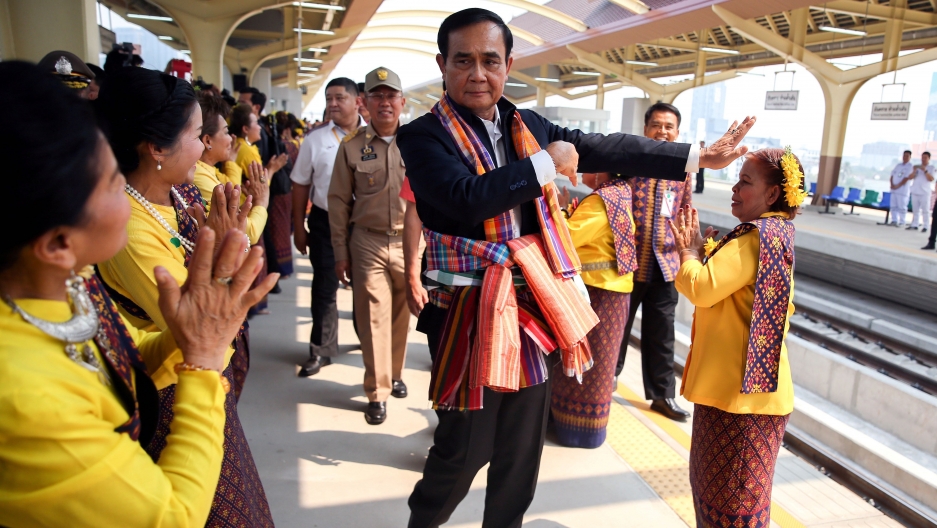 Thailand's Prime Minister Prayuth Chan-ocha performs a traditional dance with performers at Khon Kaen railway station during a visit ahead of the general election in Khon Kaen Province, Thailand, March 13, 2019.

Athit Perawongmetha/Reuters/TPX Images of the Day

Thailand has one of the most coup-prone militaries on Earth. Their takeovers are so habitual that last month, when officers drove armored vehicles across the country to join US-led war games, they had to fix signs below the turrets.

The placards read, “For Training,” in bright red letters. Without that bit of assurance, the public might think, “Oh, boy. Here we go again.”

Thailand is already ruled by its military, but that didn’t stop the coup rumor vortex from spinning. After all, in the past, generals have staged coups from within.

But these frequent coups — occurring roughly once a decade — won’t be necessary in the future, according to the top brass. They say they’ve invented a new political system that favors stability. And on March 24, they promise to return some power — but not all — to civilians through an election.

The army staged its last takeover five years ago, proclaiming themselves moral defenders of a nation corrupted by elected leaders. Then, the coup plotters worked on inventing that new political order. Inherent in its design is a deep skepticism of politicians chosen by the masses.

Imagine if, in the US, the House of Representatives was elected, but the Senate was entirely chosen by the Pentagon. That crudely approximates what Thailand’s junta has created. Of the 750 seats comprising Thailand’s new, lawmaking body, 500 will be picked by the public. But 250 will be appointed by the junta.

On top of that, the military is running for office in its own election. The institution has created a proxy party called Power of the People’s State. It’s backed by the current prime minister and mastermind of the most recent coup, Prayuth Chan-ocha, who is now campaigning to stay on as the country’s leader.

Known as gravelly voiced and scornful of critics, Prayuth has sought to soften his image by penning a patriotic song with a tender, Michael Bolton-esque motif.

The coup plotter doesn’t sing the lyrics, but has instead handed the mic to a silken-voiced lieutenant. The chorus goes: “I hope for a refreshed nation/I hope for all Thais to be happy and content.”

As the election nears, the pieces are already arranged in the army’s favor. It has installed byzantine rules making it extraordinarily easy to ban elected parties accused of sedition or even light malfeasance. Other rules make it difficult for parties to grow large enough to take on the army’s supremacy.

In other words, this is democracy lite.

Thailand’s army could keep seizing power the old way, rolling tanks in the streets, locking up elected leaders and drawing international scorn. But it has decided to start from scratch, designing a style of government that does not allow rival politicians to amass much power in the the first place.

Before the 1930s, the country was run outright by monarchs. But since the end of absolute palace rule, there have been long stretches of US-backed army control, stints of democratic governance and 12 coups. (That doesn’t count the failed coup attempts.)

In the last two decades or so, Thai politics have been defined by a war that pits the Bangkok-based old guard — comprised of the military officers, royalists and conservative political parties — versus an anti-establishment wing deriving power from voters, namely in the populous upcountry.

The latter has won every election this century. Helmed by Thaksin Shinawatra — a billionaire from Thailand’s north, now living in exile — this faction is associated with policies favored by the working classes, such as $1-per-visit health care. It also longs to dim the army’s power.

Scrubbing away this faction’s influence was a prime goal of the last two coups — in 2006 and 2014 — and the army, through intimidation and detentions, has largely dismantled its street network (known as the Red Shirts) that once staged raucous protests.

Related: A tech startup called OMG wants to revolutionize cash for hundreds of millions of 'unbanked' people in Asia

Through the new election, familiar faces from this anti-establishment wing will vie for a spot in the new political order — even though the junta has worked overtime to limit what they can say on the campaign trail. The military’s proxy party has even sought to ban political rivals from accusing them of seeking prolonged “dictatorial power.”

And yet various anti-junta parties — including an upstart faction called Future Forward, powered by social media and millennial fervor — keep trying to grind through these obstacles.

Still, voices from the establishment suggest it’s naive for candidates to think they can work within this new system to overcome military dominance.

“Do you really think you can just pick up a pen and kill a dictatorship?” wrote Benya Nandakwang, candidate with a pro-junta party, on Facebook. “Keep dreaming.”