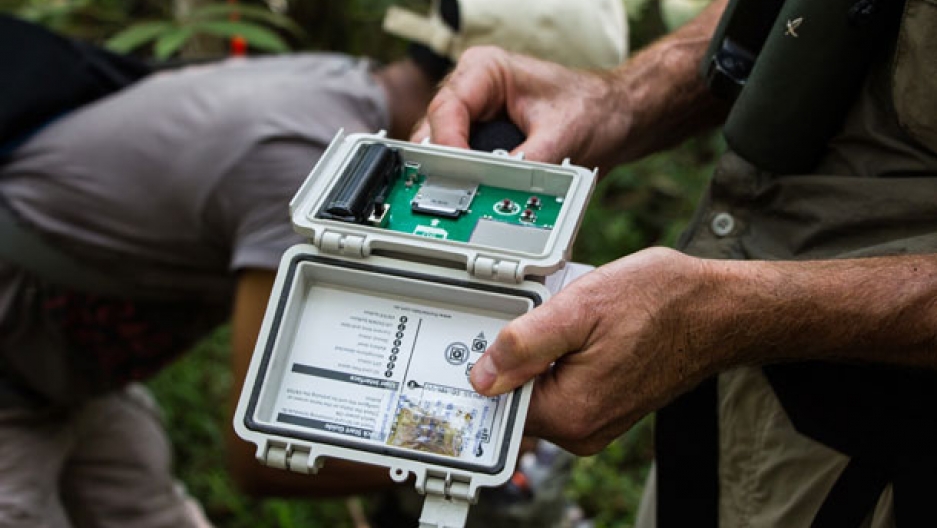 Acoustic recorders can detect sound from hundreds of meters away, helping researchers monitor large areas in the rainforest.

Satellite images of a rainforest might show a lush tree canopy, but they reveal very little about the biodiversity of the ecosystem. So, to see if a forest is intact and healthy, some scientists have started listening instead of looking.

Their technique is called bioacoustic monitoring. Birds, primates and insects make sounds that can be picked up by recording devices, and these sounds can tell scientists a lot about the biodiversity and health of a forest.

Rhett Butler, editor-in-chief of the environmental news agency Mongabay and co-author of a recent paper about bioacoustics in the journal Science, says if we really want to know what’s happening under the tree canopy, bioacoustics can capture a much broader range of information and provide a more nuanced picture of a forest ecosystem than remote sensing by satellite.

Butler’s co-authors on the paper, Zuzana Burivalova and Eddie Game, have bioacoustics study sites in Borneo and Papua New Guinea, and other researchers are using bioacoustics all over the world. “We’re talking a very large number of sites where data is being collected right now,” Butler said. 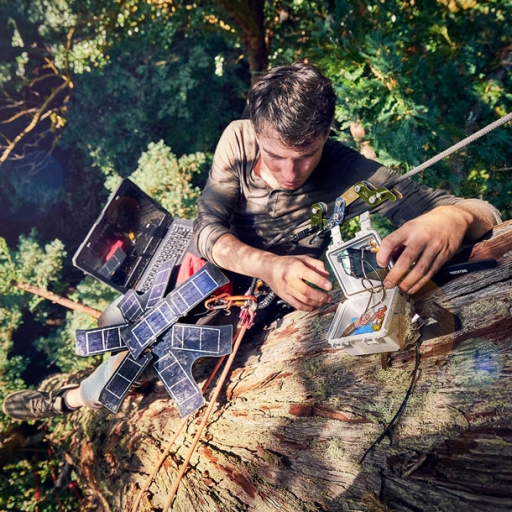 A researcher places a bioacoustic recording device high in a tree. Bioacoustics allows researchers to gather data over time and determine what are the best conservation methods in protected areas.
Credit:

The most common bioacoustics method is to place recording devices in waterproof boxes and mount them up in trees. The devices can be set to record at certain times of the day, and then the researchers come back and collect the data every few weeks or months.

Even better, in Butler’s view, are devices linked to a network. A project called Rainforest Connection uses modified cellphones powered by a solar array and mounted about 100 feet up in the canopy. These devices collect and send data in real time and the data can be monitored by researchers just about anywhere.

One of the big advantages of this type of system is the possibility of doing real-time law enforcement and other forms of interdiction, Butler says. “If you hear a gunshot or a car engine or voices, you can get a real-time alert and then take action as something's happening,” he said. “With satellite systems … there is, at best, a week delay [between] when you start to see something [and] when you can actually take action.”

A networked, bioacoustic system would allow law enforcement to intercede before destruction or poaching occurs. “Once you start to hear the first chainsaws, you could send someone in before it actually becomes deforestation,” Butler said.

To illustrate the potential of bioacoustics monitoring, Butler has two recordings from the rainforest of East Kalimantan, in Indonesian Borneo.

The first sample contains “the full range of animals and it showcases that this is a biodiverse, healthy system,” Butler said. The second sample has no birds or mammal sounds, leaving only the sound of background insects. The difference illustrates — in stark terms — how human activity can affect the biodiversity of a particular area of forest.

Mongabay’s bioacoustics project emerged from a series it produced a couple of years ago that looked at “what works and what doesn't work in conservation,” Butler said. The series specifically asked, what does the science tell us?

“We found that science has not really done a great job at evaluating the effectiveness of different conservation interventions,” Butler said. “It’s hard to say what really works and what doesn't work, based on the science. … So, that got us wondering: Are there ways that we could address this issue?”

Zuzana Burivalova's work on bioacoustics seemed like a great way to scale up monitoring of biodiversity, which could then be used to inform evaluations of specific conservation interventions because they could be compared directly, Butler says. Bioacoustics can also provide historical baselines and, as technology and species identification improve over time, researchers can run algorithms against that original data and see how conditions have changed.

Butler would love to collect all the bioacoustic data in a central repository open to scientists who could then run algorithms against the data to look for patterns.

“I think if you took that, combined it with camera traps — especially networked camera traps — and satellite data, we would get a much, much better picture of what's happening with biodiversity, wildlife populations and forests in these places,” Butler said.