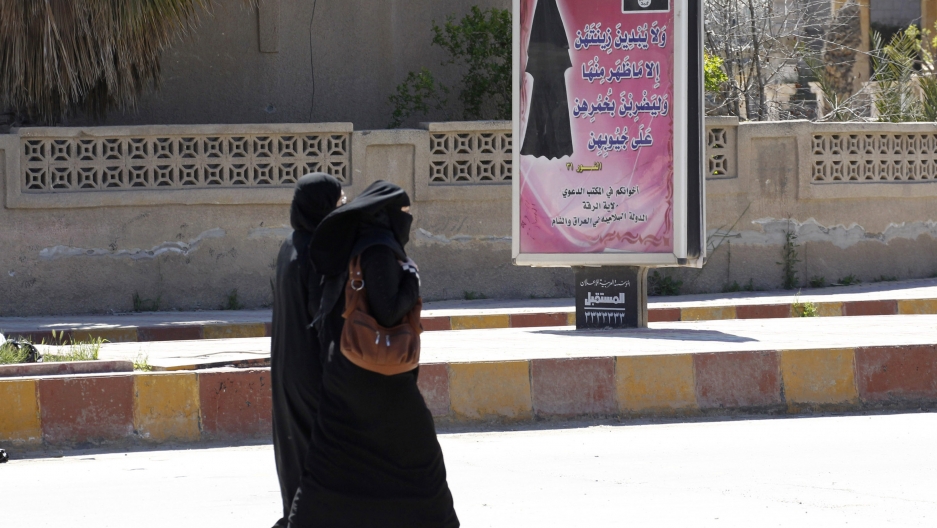 Veiled women walk past a billboard that carries a verse from Quran urging women to wear a hijab in the formerly ISIS-held province of Raqqa, Syria.

Countries are grappling with what to do with women who left to join ISIS. Now, as the organization is driven from its last strongholds in Syria, many of these women have sought to return to their home countries.

Shamima Begum, of Britain, was stripped of her citizenship on security grounds last month, leaving her in a detention camp in Syria. Her three-week-old baby died on March 9, the third of the 19-year-old's infant children to die since she traveled to Syria in 2015.

Found in a refugee camp in February, an unrepentant Begum sparked a debate in Britain and other European capitals as to whether a teenager with a jihadist fighter's child should be left in a war zone to fend for herself.

Iranian-American journalist and writer Azadeh Moaveni works as a gender analyst for the International Crisis Center. She's an expert on gender and Islamic insurgencies and she spoke with Marco Werman about the role women have played in ISIS as many try to re-enter the countries they left when they went to join the militant group.

Marco Werman: Writer Azadeh Moaveni has been considering the case of Shamima Begum. Let me just start with your concerns over how to refer to these young women who joined ISIS. What is the problem with calling them jihadi brides or ISIS brides?

Azadeh Moaveni: Well I think "bride" suggests that their only relationship to this insurgent movement or this militant group was a civilian spouse, whereas many young women joined before they were even married. They joined up as members. They were voluntary recruits because they believed in the ideology and the politics of the organization. So, I think "brides" strips away that agency and that motivation. It doesn't really help us understand the way that recruitment worked.

"I think 'brides' strips away that agency and that motivation."

Is there a better terminology that you can think of?

To me, "member" is more clear. It suggests some agency and voluntary affiliation. It doesn't immediately read as operational involvement because in a great many cases, women were not operationally involved or they didn't participate in direct violence, but it reflects that they were part of the organization. They lent their support to it in ways that made it stronger and that helped to recruit.

And why is it important what we call these women? I mean, some people might say they joined a terrorist organization. In the case of Shamima Begum, she's got no remorse about joining. Why should we pay attention to the words we use to describe them?

Well, I think in lots of conflicts around the world, whether it's Boko Haram in Nigeria, ISIS in Syria, or Al-Shabab in Somalia, we are increasingly seeing or are ready to see, prepared to see, and understand how actively women are involved. I think it's really hard to read the deep social base, how the contexts of state collapse affect men and women and bring women to the centers of these insurgencies. So I don't really think we get these conflicts unless we can also map the involvement of women onto them.

Related: An American family is helping those left behind in Syria as ISIS withdraws

So there are the semantics and then perhaps more troubling issues like how should a young woman like Shamima Begum be judged?

Certainly, there is a problem of intelligence and there's really no good solutions when it comes to prosecuting women or men who are coming out of these kinds of conflict zones because some of the evidence against them is inadmissible. There are retroactive ways or new laws that have been instituted, for example, that could lead to higher sentences simply for joining a prescribed organization or for going to a zone where there was this kind of violence going on. I think something that is being turned to in the UK is the stripping of citizenship, which essentially — and this has happened in the case of Shamima — renders her stateless and then foists the problem of all of these jihadists or women militants onto the very vulnerable fragile states like Iraq or Syria itself, which can't be the best solution. So, I think a case-by-case basis, maybe tribunals. I think there certainly are legal systems — like the American legal system, the British, or the European states — that have more robust ways to be able to prosecute. If we leave these women stranded in places like this, they may actually never be punished or see the consequences for what they've done.

As you said earlier, "jihadi brides" or "ISIS brides" takes away the agency of these women and what they were doing. What do we know about what these women — like Shamima Begam — were actually doing once they were inside the caliphate?

For a lot of women, if they were skilled, educated, or trained in something, they took those skills to Syria. I spent a lot of time in Tunisia where hundreds of women went and there were doctors, language teachers, midwives and graphic designers. They would take their skills and work there because they thought they were building a new society. Less educated and unskilled women either stayed at home or they were involved in these morality police brigades that would essentially terrify and beat into submission the local population by beatings, lashings, fines for little infringements in dress codes. Of course, I think women were active as recruiters as well and were running the infrastructure of women kind of coming in and out of the caliphate. I would say a huge a spectrum of roles; operationally in relation to the group and also the civilian roles of a building society that they believe themselves to be building from scratch.

"They would take their skills and work there because they thought they were building a new society."

As for Shamima Begum, she's been stripped of her British citizenship, but how do you reconcile Begum's desire to return to the UK and her lack of remorse for what she's done?

To me, her lack of remorse is not really surprising. She's highly indoctrinated. This is really the only adult life she has known. But I think she does retain a British socialization, which has taught her that there is a country that has institutions like courts that will follow the rule of law and a healthcare system that will take care of you even if you are jobless. These are great strengths of British society and I think it's quite poignant that she's internalized the fact that a state can provide this in a kind of altruistic way even though she abandoned it. To me, I feel like there's a glimmer of hope that she could be rehabilitated.

A glimmer of hope at home, but how worried are you about what someone like Shamima Begum now becomes?

I think it's very worrisome, certainly, and I think that this is something that countries across the world are going to have to grapple with: How to rehabilitate these women and how to ensure that they do not continue to spread these kinds of ideas and keep them incubated in a way?